Recently, I had the honor of visiting Walt Disney Studios in Burbank, California to celebrate the digital and Blu-ray re-release of Disney’s classic Peter Pan. Upon arrival, we had the opportunity to hear from the incredible Disney animator Eric Goldberg, who drew a sketch of Smee and Captain Hook as he spoke to us about the animation process of Peter Pan. Goldberg explained how animation during that time had actors acting out scenes from the film, so they could get the movements and emotions of the characters perfect. We also learned about how the core group of animators who worked on Peter Pan were the “nine old men”, a phrase dubbed by Walt Disney himself, to his 9 main animators who brought many of Disney’s classic characters to life.

After meeting Eric Goldberg, we headed over to Walt Disney’s office! Visiting his office has been a bucket list item for me, so this was a dream come true! His office was re-created in 2014 by the Walt Disney Archives team in his original office space. Many of the knick-knacks and furnishings were original from Walt’s office as he last left it in the 1960’s. The most impressive item? A piano in his personal office, the very same that Mary Poppins’ Feed the Birds was played by Richard and Robert Sherman for Walt Disney. To this day, the only person who has the privilege to play the piano is Richard Sherman. There was so much accuracy and attention-to-detail that the Disney Archives team poured into restoring Walt’s offices, that even the books on the shelves were tilted at the same angles as they were in the last photographs of Walt’s office! 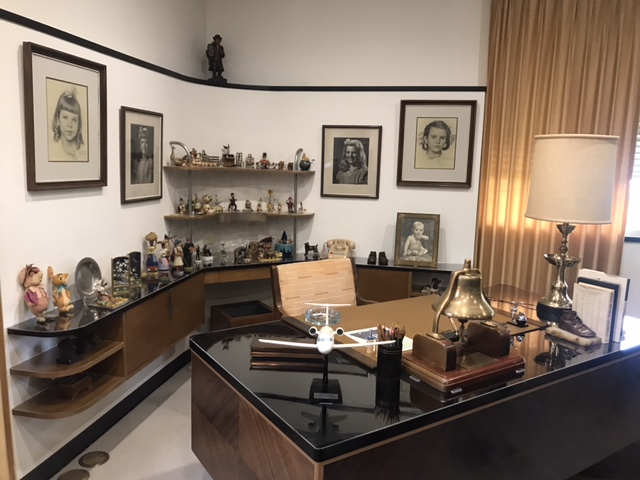 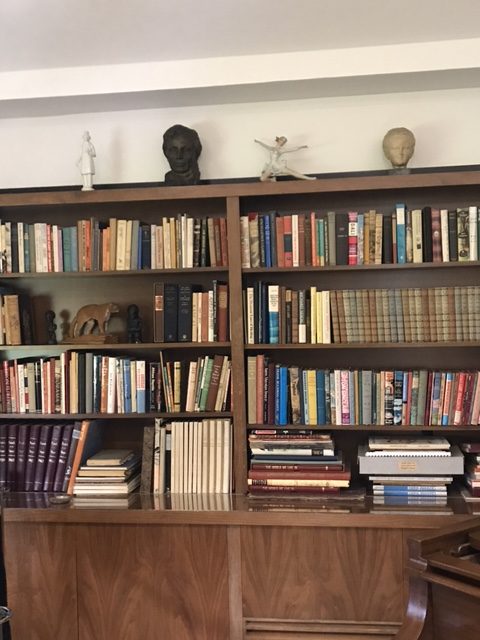 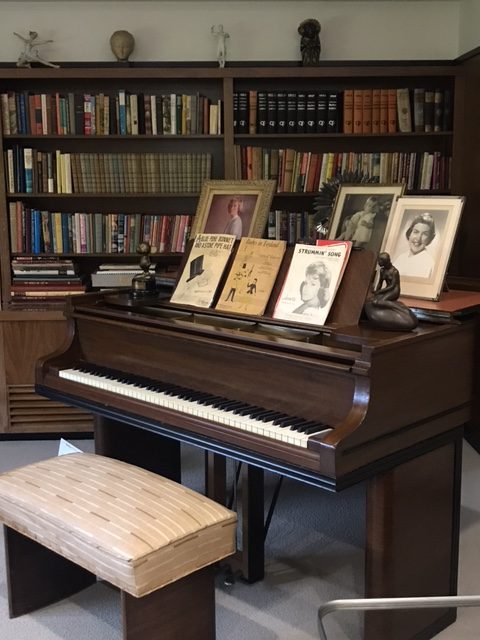 We then headed over to Walt’s formal office, which showed his original plans for Epcot, photos of his private plane, and doors that opened up to reveal a kitchen! The kitchen had stainless steel appliances from G&E that were installed in the 1960’s yet still work to this day. Talk about Disney magic! It was thrilling to say the least, to literally be walking in the same space where Walt worked, and where so many amazing meetings must have happened. 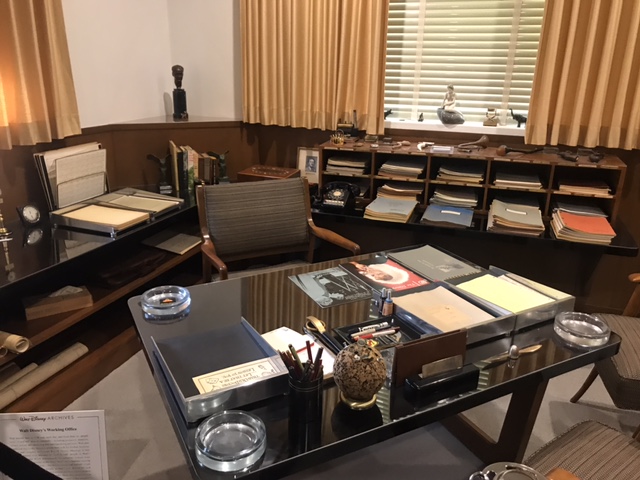 After the tour of Walt’s offices, we went to the Walt Disney Archives to see some amazing Peter Pan items from the archives. Lots of books, records, and toys from all decades. It was pretty cool to see the transition of Peter Pan merchandise from the 1950’s to now. I also saw this letter to Walt Disney from Cecil B. deMille that I loved: 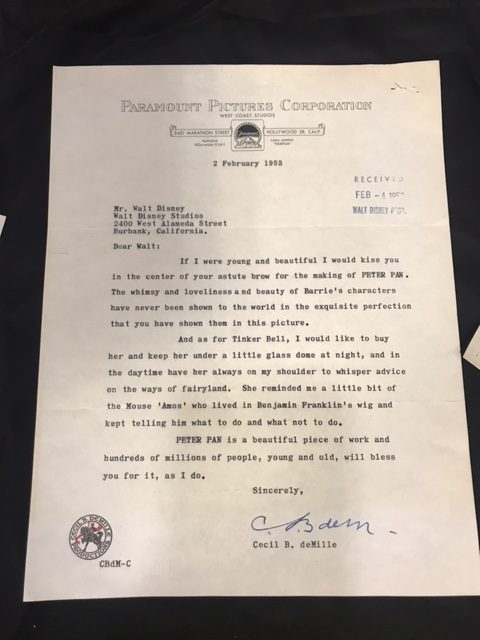 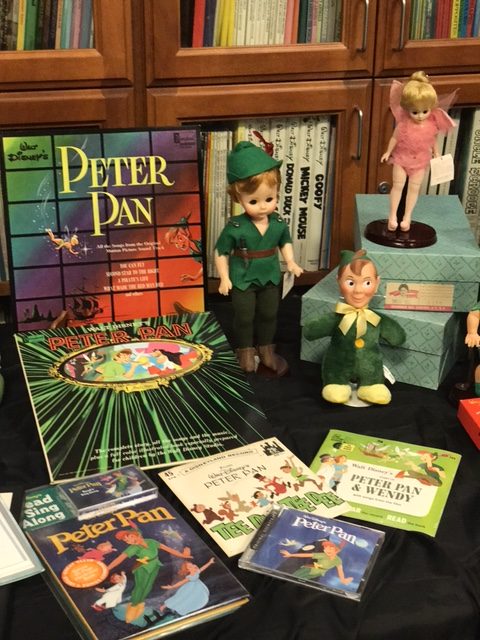 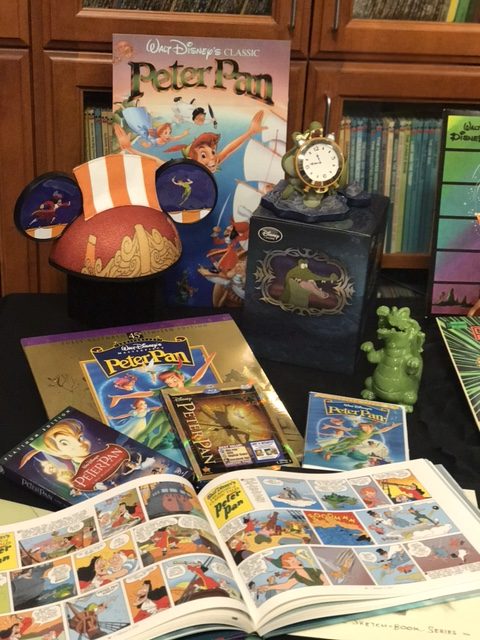 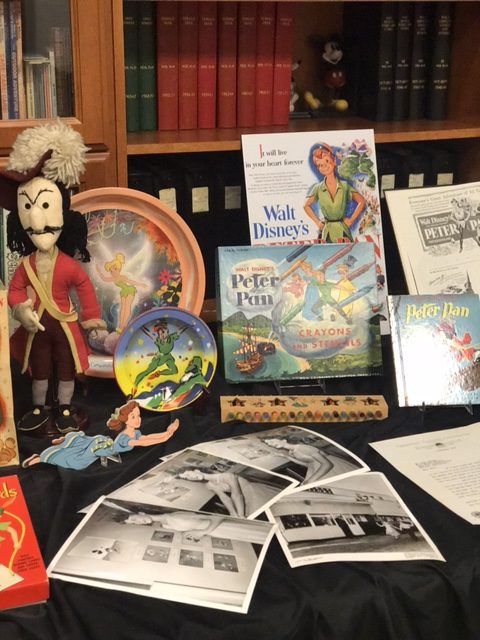 An Interview with Kathryn Beaumont

As if the day didn’t already have enough pixie dust, we ended our afternoon with meeting and interviewing Kathryn Beaumont, who is the voice of Wendy Darling in Peter Pan (as well as the voice of Alice in Alice in Wonderland). Beaumont talked to us about how she did her part in bringing an animated character to life during the 1950’s. She would first do all her voice work with a director and rehearsing with her fellow actors. Then, all the voice recordings for the film would be done. Then lastly, she would do the live action performances of Wendy so that the animators could use them for reference. In the interview, Beaumont also shared:

Q: We suspect that you have wonderful memories of working on Peter Pan. Would you share some of them with us?

KB: Oh, it’s hard to pinpoint. Basically, it was just a wonderful experience. It was totally different from playing the role of Alice in “Alice in Wonderland”, because there were other characters. There were my character’s brothers in the movie. There was Peter. There were the Lost Boys. All these wonderful actors that I was able to play off of. Whereas with Alice, a lot of times the recording was done alone. So it was nice being able to interact with other actors who were in the story.

Q: Do you have a favorite scene in Peter Pan?

KB: Well, I thought the flying scenes were fun…after I got used to being afraid of being so high and looking down from the rafters above the stage. I enjoyed that. And I enjoyed working with everybody, and how nice everybody was. The animators made me feel a part of the team, seeing the dailies and seeing what the rough drawings were like. They’d let me have a look durig recess time and see what the progress was. And they gave me an education so I really have a much better understanding of what the process was.

Q: Do you have any fond memories of Walt Disney himself?

KB: Yes, and I found Walt to be such an easy person to be around. I felt so comfortable with him. Having come from another studio, my experience was feeling that it was just a workplace, and I expected that would be the atmosphere at every studio. Until I came to Disney, and I realized, my goodness, this is very, very different. There’s a whole different atmosphere here. Walt himself was visible, where the head of the studio at MGM was not. At Disney, his presence was felt. You’d see him walking down the hall. He’d join the line in the cafeteria at lunchtime. He would pick up a tray, get his lunch ad find a place to sit down with someone and just chitchat. I think the whole idea was that we were all team members. It was everyone sharing responsibility and sharing creativity. 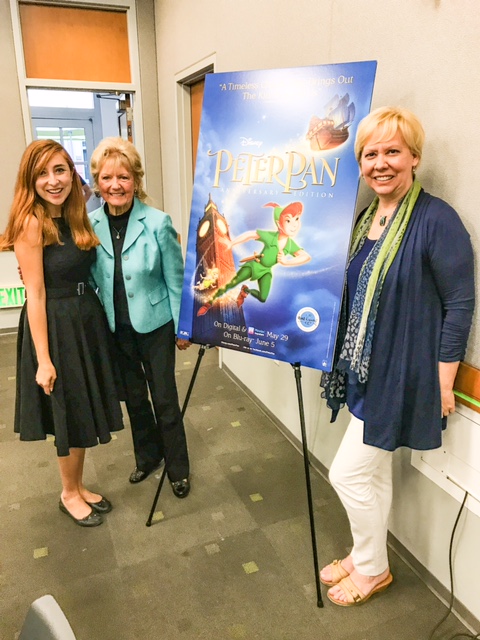 Kathryn Beaumont was such a sweet and fascinating person! It was an honor to meet her!

Peter Pan on Blu-Ray and Digital

Peter Pan is now available on digital, and Blu-Ray as of today! And if you thought my day at Walt Disney Studios sounded amazing, you’ll love the bonus features, since they also iclude a look at the same tours I took!

That’s a whole lot of bonus features, perfect for any Disney fan! You can find Peter Pan on Blu-ray here.