Disclosure: My visit to The Walt Disney Family Museum was hosted, but all thoughts and opinions are my own.

I am so excited to share my first blog post in a new series on my blog I’m calling “Finding Disney.” Being the lover of Disney that I am, I’m always seeking out Disney related things to do in addition to the Disney Parks. I absolutely love going to the Parks, but on days I can’t make it, or if I am blocked out, I like to find other places to discover some Disney magic. So join along twice a month as I’m “Finding Disney!” 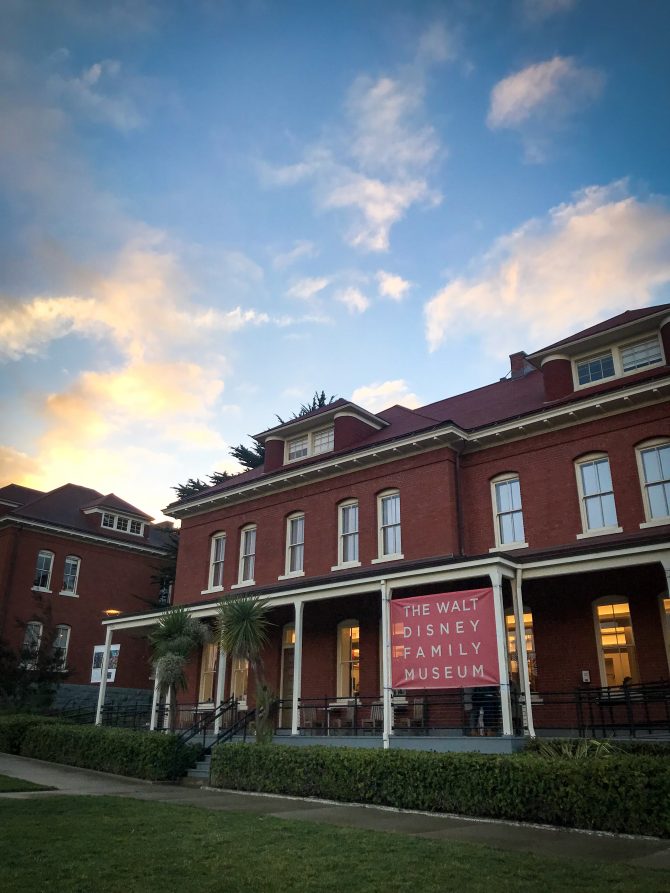 For the very first blog post in the series, I visited The Walt Disney Family Museum in San Francisco, CA for my birthday with the help of SF Travel. Being the Disney history nerd that I am, I have always wanted to visit here. It is located in the Presidio, with a view of Alcatraz and the Golden Gate Bridge from the outside of the building. It was founded 10 years ago by Walt Disney’s daughter, Diane Disney Miller. The museum doesn’t solely focus on Walt’s hits, but rather is an extensive history of Walt from when he was born, through his childhood, and his extensive career. It showcases both the ups and downs he faced,really giving you a sense of his passion and perseverance!

When we walked in, we instantly realized the museum was bigger than we expected! It’s three floors, complete with a cafe and gift shop. If you want to read everything in the museum, allow a whole day. We spent about five hours in the museum and probably could have spent more! You have the main exhibit, and then a second exhibit hall that holds whatever the current special exhibit is (and is an extra cost, just $5 in addition to a regular ticket). Now, for a walk-through of what to expect (but don’t worry, just an overview, I won’t give up too much of what’s in the museum). 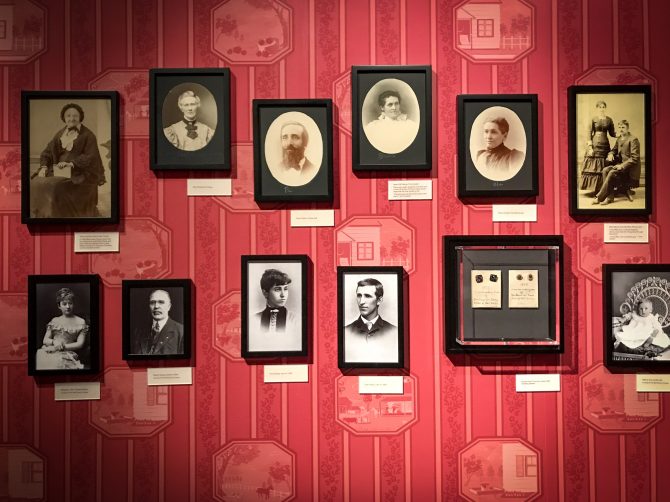 While I knew a lot about Walt Disney’s younger life, I realized going through and reading the exhibits that there were so many fun stories and little details I didn’t know about! The inclusion of fun stories of Walt’s family life really makes the museum a unique and fun experience for a Disney fan. The first exhibit shows photos of Walt Disney’s family, starting from his great grandmother to Walt and his siblings as children. We got to see photos of the places Walt lived as a child, from Chicago to Marceline to Kansas City to Chicago again, and then to be an ambulance driver in France during the war. 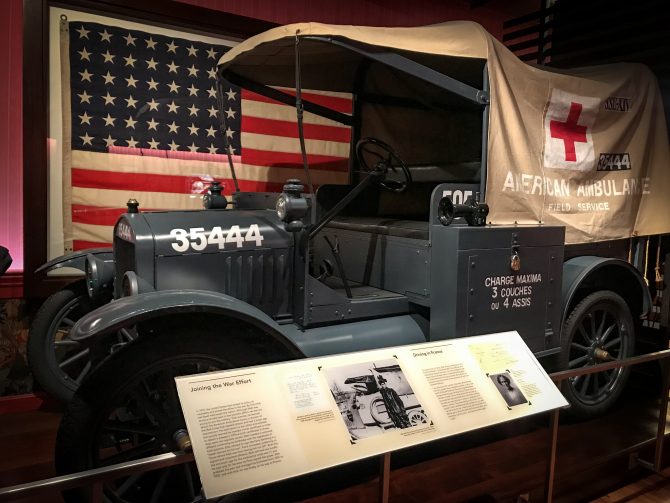 The Dawn of a Career

In the next room, we see Walt’s early cartoon drawings he created for ad companies, and cartoons he created with Ub Iwerks, which began his career. Something I really loved about The Walt Disney Family Museum was how immersive of an experience it was. Just as Walt himself strived for immersive storytelling; the museum is true to Disney’s way of telling stories with very detailed exhibits and decor. This really stood out to me when we went from The Dawn of a Career upstairs to the next exhibit, Hollywood, talking about Walt’s beginning in Hollywood, CA. When you take the elevator from downstairs to upstairs, the elevator is decorated to make you feel like you’re in a train car, just like the one Walt rode in to come out to California from Kansas City. 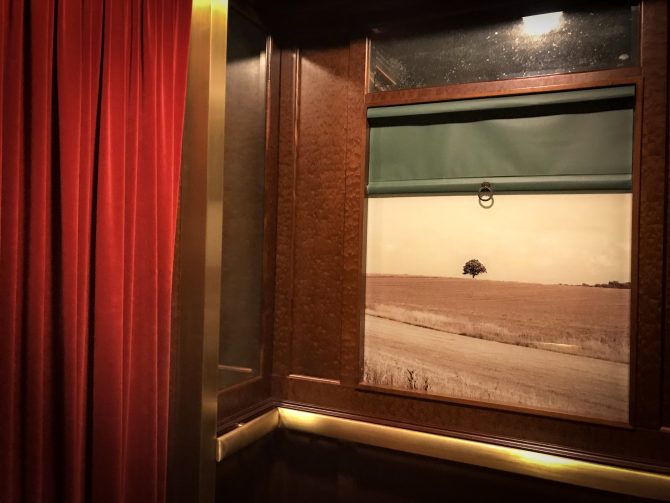 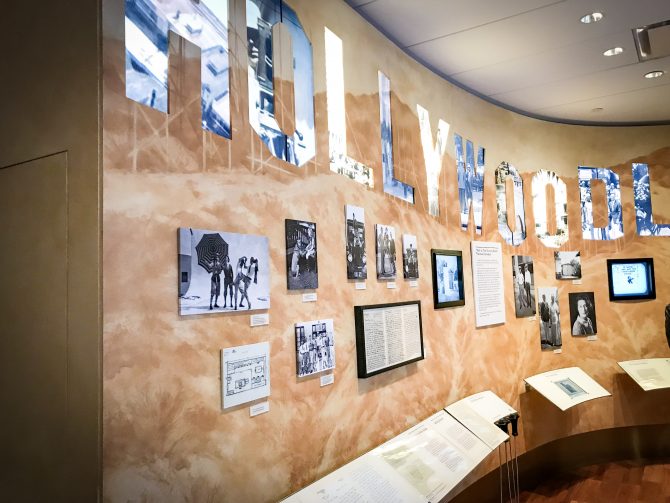 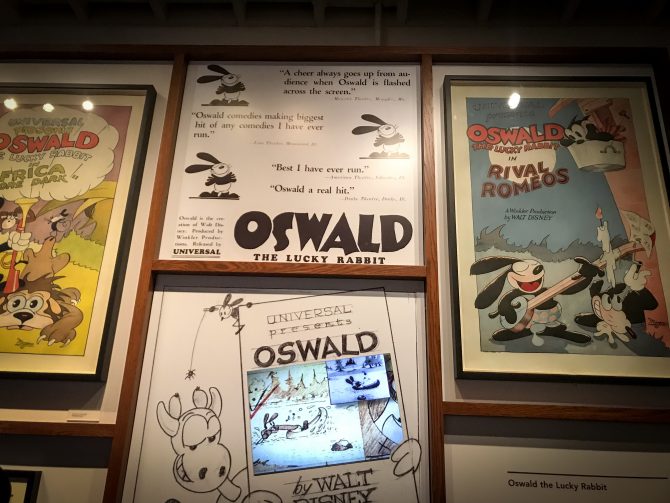 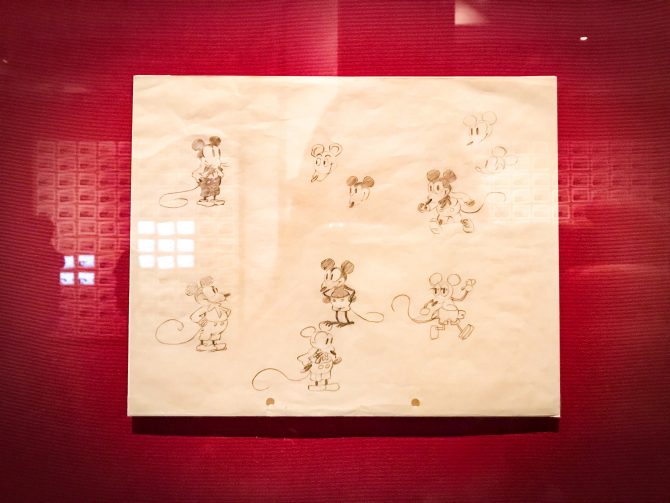 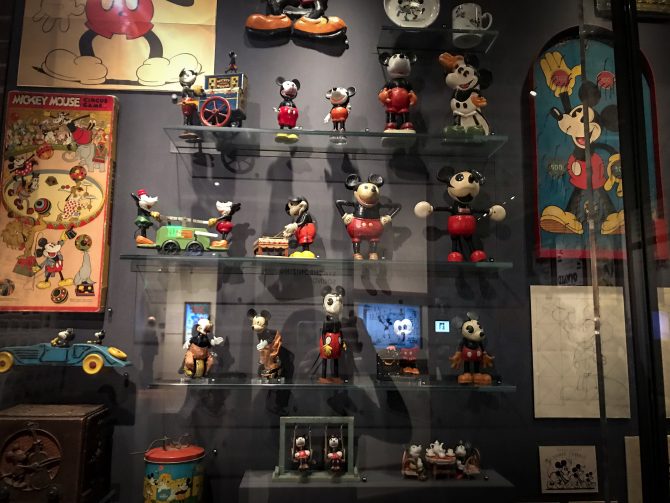 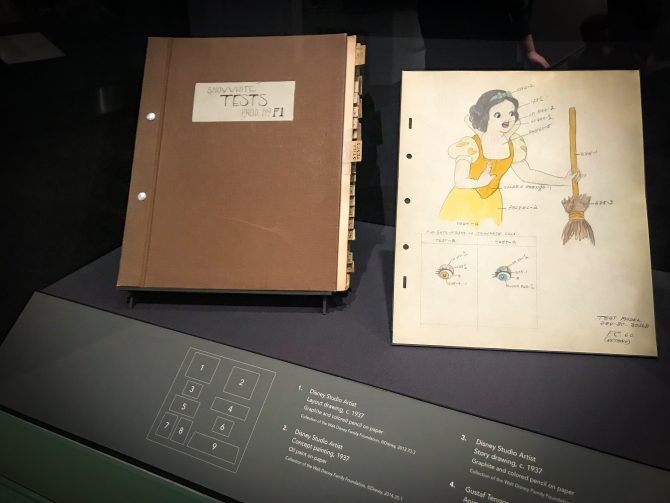 The next section talks about the history of Walt’s creation of the groundbreaking Silly Symphonies, which then led to his passion project, an full-length animated feature film: Snow White and the Seven Dwarfs. One of my favorite part of the exhibit was seeing photos and items from the Snow White world premiere at Carthay Circle, and it’s surprising booming success.

We Were in a New Business 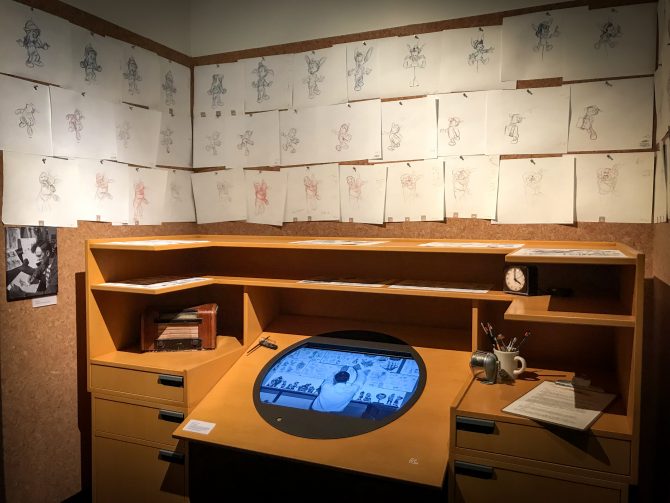 The next exhibit talked about the creation of Pinocchio, Bambi, and Fantasia, along with using the money from the success of Snow White to build Walt Disney Studios in Burbank, CA. As mentioned earlier, I knew this general knowledge prior to going to the museum, but it was thrilling to see the order of Walt’s life laid out room by room, themed to each piece of the story, and displaying little details I wouldn’t have seen outside the museum. Such as the Walt Disney Studios employee cafeteria. The food is of course very different then what you would see on a menu today, and was fun to look back at what Studio life was like then. 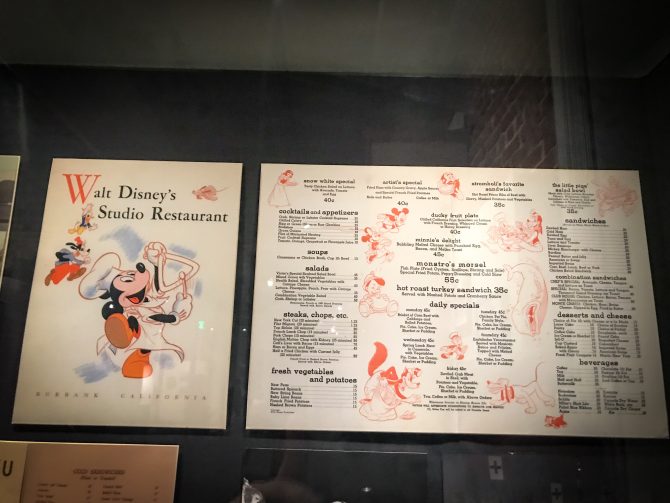 This room was quite interesting, as it talked about the artist strike, along with the time when the arm took over the Studios in World War II. This part of Disney history has always fascinated me, and it was fun to get to learn more about it in this section.

This section showcased the period after the war when Walt created many of his classics, such as Cinderella, Peter Pan, Lady & the Tramp and many more! 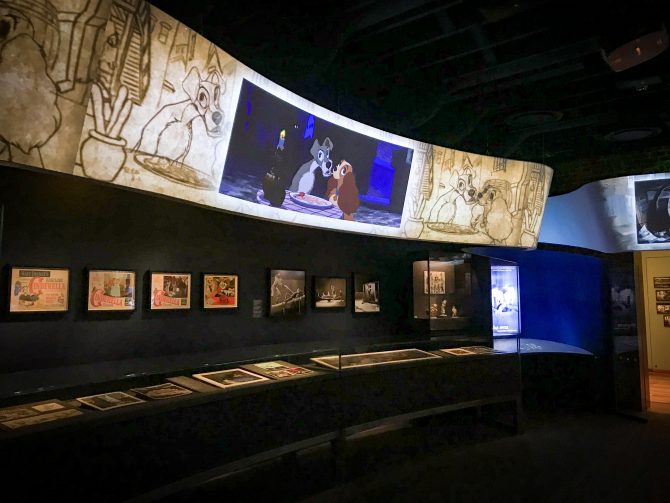 This section was definitely one of my favorites, as it showcased more of Walt’s personal life that you don’t commonly see. There were many personal items displayed, such as gifts he gave to his wife Lillian, and many items he acquired on his overseas trips with his family. Some of these included the small automaton animals from Sweden that inspired the Tiki Room birds! When you’re in this room, I highly recommend asking a docent to tell you some stories about the items. Our docent told us some great facts and stories about them! 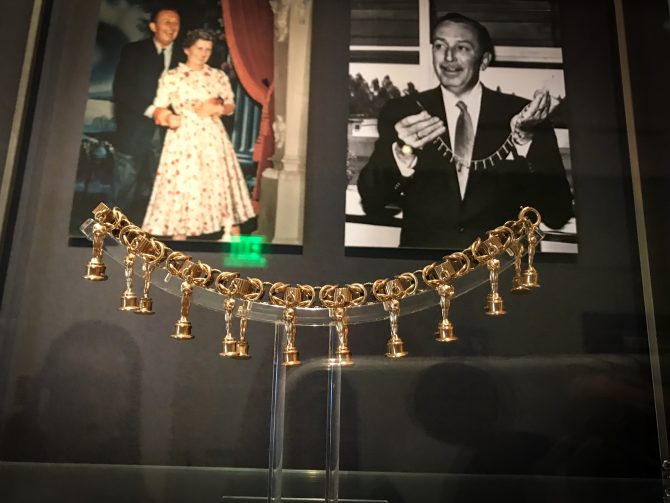 Bracelet Walt gave to Lillian. He added an Oscar onto the bracelet whenever he was nominated for one.

This piece of the museum talks about Walt’s creation of the True Life Adventure series, and his love for nature. It seems fitting that this exhibit sits along a large glass wall where you can see the San Francisco bay! (I’ll say it once and say it again, you gotta love those storytelling details that feel very Disney!). Another immersive storytelling detail? On the way from this exhibit to the next one that focuses on Disneyland, sits an old Griffith Park bench, like the one Walt sat on when he came up with the idea for Disneyland. 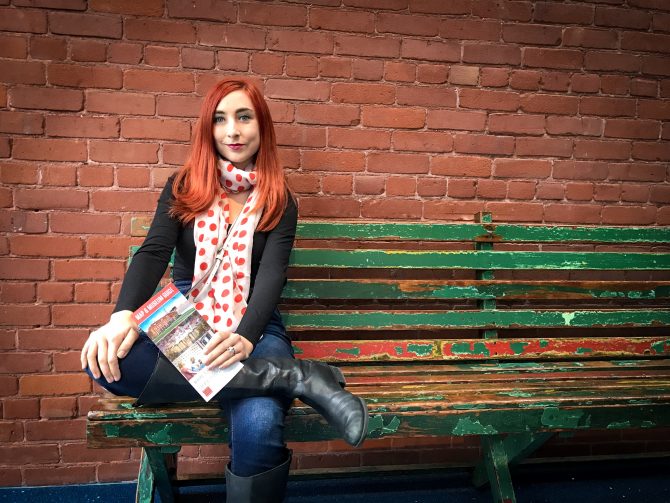 When you turn a corner, this exhibit will take your breath away, as it lays along a spiral staircase that ends in a diorama of Disneyland, around the time Pirates of the Caribbean was completed. You can read about Walt’s creation of his train for his home, along with the creation of Disneyland, the 1964 World’s Fair, and his live action successes such as The Shaggy Dog and Mary Poppins. 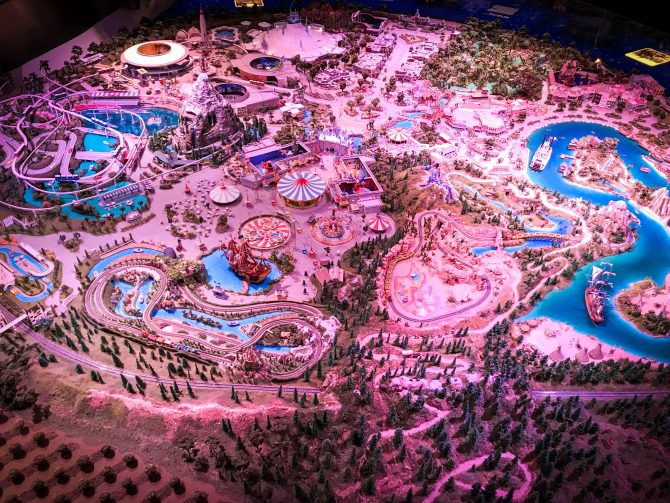 The final two exhibits talk about Walt’s plans for building Epcot in Orlando, and are completed in talking about Walt’s death and his brother Roy making sure Walt’s dream came true of opening Walt Disney World.

There’s More to See in the Museum! 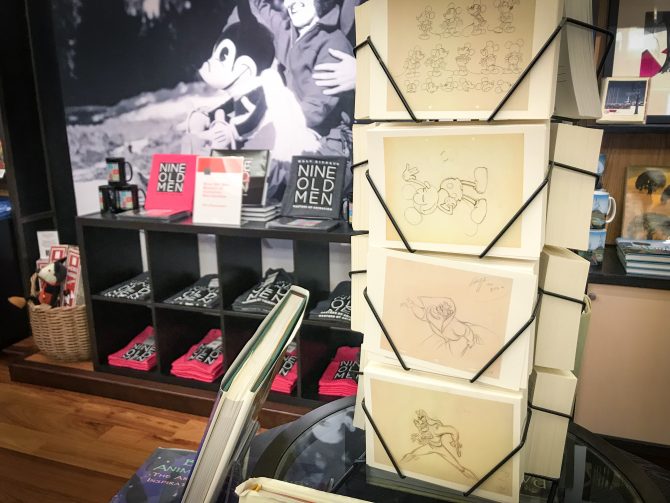 As you can see, there are a lot of exhibits within the main parts of The Walt Disney Family Museum. Aside from them, in the main building you can find a cafe with a full menu, snacks, coffee (and even wine in the afternoon/evening). You can also find a gift shop with some unique Disney gifts. Before you even enter the exhibits, you can see many of Walt’s awards on display, including most of his Oscars (even the famous Oscar + seven small Oscars to represent Snow White and the Seven Dwarfs).

Special Exhibit – Mickey Mouse: From Walt to the World 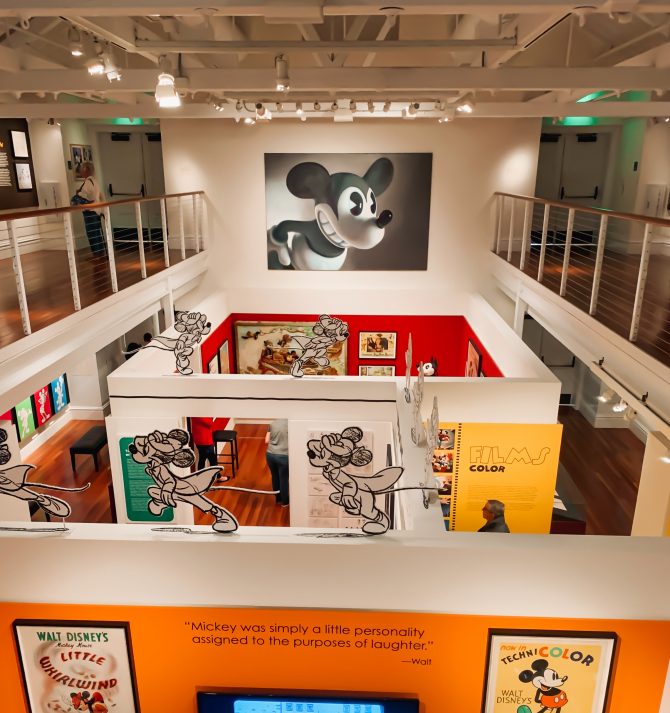 The special exhibit, as mentioned earlier, is $5 in addition to the regular admission price, or $9 on its own. It’s well worth the price, taking up a two-story building filled with lots of great Disney history! The special exhibits rotate. The Walt Disney Family Museum currently has the Mickey Mouse: From Walt to the World exhibit until January 6, 2020. There was a separate area dedicated to each of the Nine Old Men. The exhibit shows Mickey Mouse’s black-and-white cartoons, the first time he was in color, Mickey merchandise, Mickey in the Disney Parks, and Mickey Mouse art. 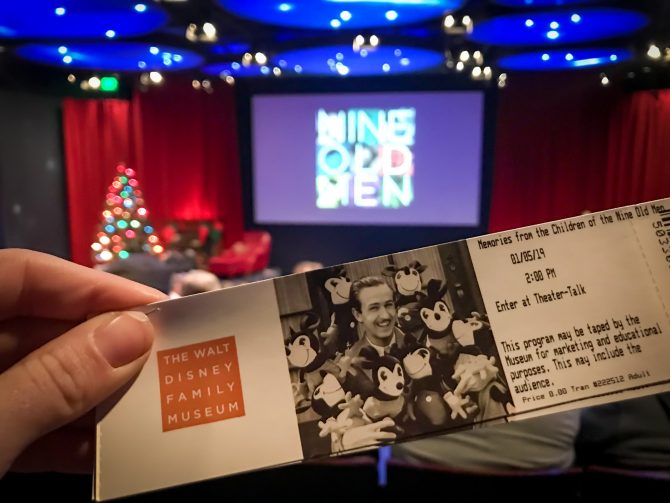 The Walt Disney Family Museum has a theatre on their lower level where they have movie screenings on most days (right now it’s rotating between Sleeping Beauty and The Shaggy Dog), and often have special talks and events on the weekends (visit their calendar here). When we went in early 2019, there was a fabulous 2-hour-talk moderated by producer Don Hahn, where he showed slides and photos of the Nine Old Men, and spoke with some of the children of the Nine Old Men as they shared stories of their fathers. We learned so much about who they were as a person, and fun stories about them visiting the lot as kids and some even meeting Walt Disney. One of the children, the son of Woolie Reitherman, was the voice of Christopher Robin and Mowgli!

About the Walt Disney Family Museum 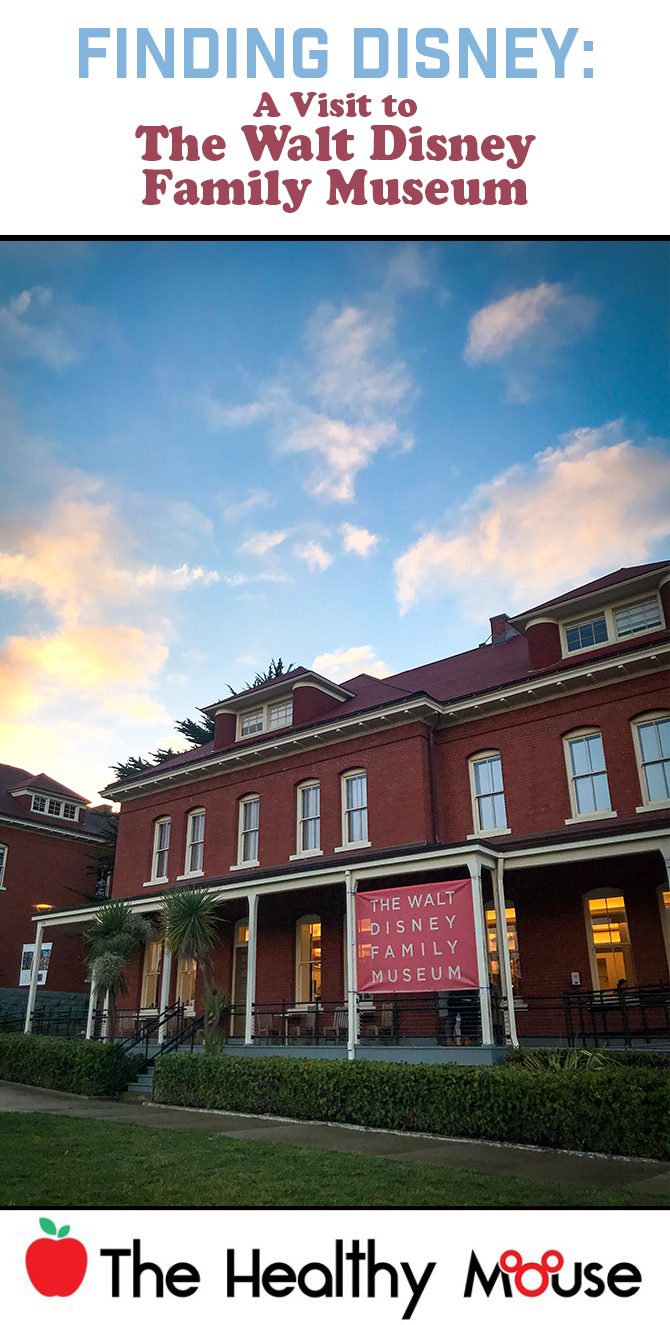