Last week I was at Walt Disney World visiting Toy Story Land, already in awe that I get to cover a press junket for Toy Story 4, when I grew up with the Toy Story movies. Then on my last day in Orlando, a very surreal thing happens. We get to actually interview the cast, both actors new to Toy Story 4 and some actors that have been working with Pixar since the first Toy Story. Coming out to a huge round of applause from the audience was Toy Story 4 director Josh Cooley, producers Mark Nielsen and Jonas Rivera, actor Tony Hale (Forky), Annie Potts (Bo Peep), and then Woody himself, Tom Hanks! 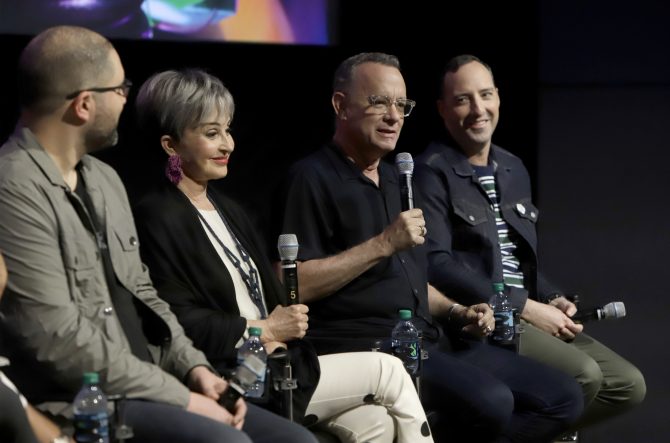 This is Hanks’ fourth Toy Story film, Potts’ third Toy Story film and her first one since Toy Story 2 in 1999, and Hale’s first time being a part of the Pixar family. With each of these actors having been a part of this legacy in different ways, everyone was wanting to know:

What was it like for each of them to be a part of Toy Story 4?

Hale said it was overwhelming since he was so nervous to be part of a series of movies that are so iconic, but this helped because his character Forky is also overwhelmed and nervous. However, he is so grateful to be a part of this:

“But we are such a small piece of the pie of what is involved in Toy Story. The amount of artistry and creatives and tremendous labor that has gone into this movie outside of us. The attention needs to be shining on that. Because they really have worked so hard. The movie is eye candy. It’s just such a visual masterpiece.” – Tony Hale

Tom Hanks said what was special for Toy Story 4 was that he was able to record Woody’s scenes with Bo Peep together with Annie Potts for the first time:

“That never happens. You’re always in a sound stage by yourself, not being able to move off mic. And we got to actually relate with this vast history between the two of us. You leave a recording studio, the session thinking wow, we took it pretty far there. But every time we showed up for the next one, something was revealed to us in the pages that they had for us. So we always knew what territory we were going into, but never the specific route.” -Tom Hanks 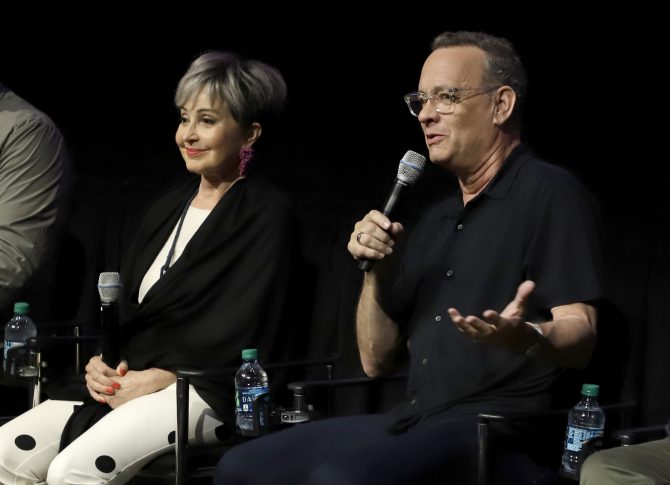 Annie Potts upon returning to record the role of Bo Peep noticed right away that Bo speaks a little differently now than when we last saw her in Toy Story 2. Over the time she was recording for Toy Story 4, she started to realize how important her role was going to be. She loved that she was able to incorporate the experiences of her colorful life into this new dynamic Bo.

While many fans have been excited for another Toy Story movie, a question many of us have been wondering is:

The director Josh Cooley said that when they go about making a movie at Pixar, they don’t think “wow this made a lot of money, let’s make another.” Rather, they had a story they wanted to tell, and they focus on telling a really good story rather than having box office numbers on their mind during the creative process.

“We love these characters. We love the world. And Pixar was built upon Toy Story. We just wanted to tell a great story.” – Josh Cooley

Tom Hanks put it perfectly, saying that what’s interesting about Toy Story is that it exists by audience demand by way of audience need.

“If the second movie hadn’t worked out or it had petered out somehow, I think we would have lost the confidence of everybody who has watched it. So All these movies exist because they were willed into existence by the audience who was willing to invest in it and return right where they were and by the people at Pixar who did not take their responsibilities lightly when it comes down to Toy Story. They have to be able to reach a level of gravitas or import or connection. And that land [Toy Story Land at Walt Disney World] is the example of it as well.” -Tom Hanks

Hanks shared about a special bond that has formed because of the Toy Story films. Since Toy Story 2, him and Tim Allen (Buzz Lightyear) get together every three months or so and just sit down and talk for hours. They catch up about their lives, and share a unique bond about being a part of this uniquely wild Toy Story experience. They have been able to form a friendship that happened because Hanks is Woody and Allen is Buzz.

Another sweet story that Hanks shared, that I’ll admit made me a little teary eyed, was about a trip he took to Disneyland with his daughter recently. They were watching Fantasmic, a night time show at Disneyland in Anaheim, and at the end of the show the Mark Twain Riverboat filled with iconic Disney characters waving flags is the finale. During that finale, his daughter noticed Woody and Buzz were part of this finale on the boat and she started to cry. She said, “Dad. You’ll always be on that boat dancing for the rest of time as long as Disneyland is here.” 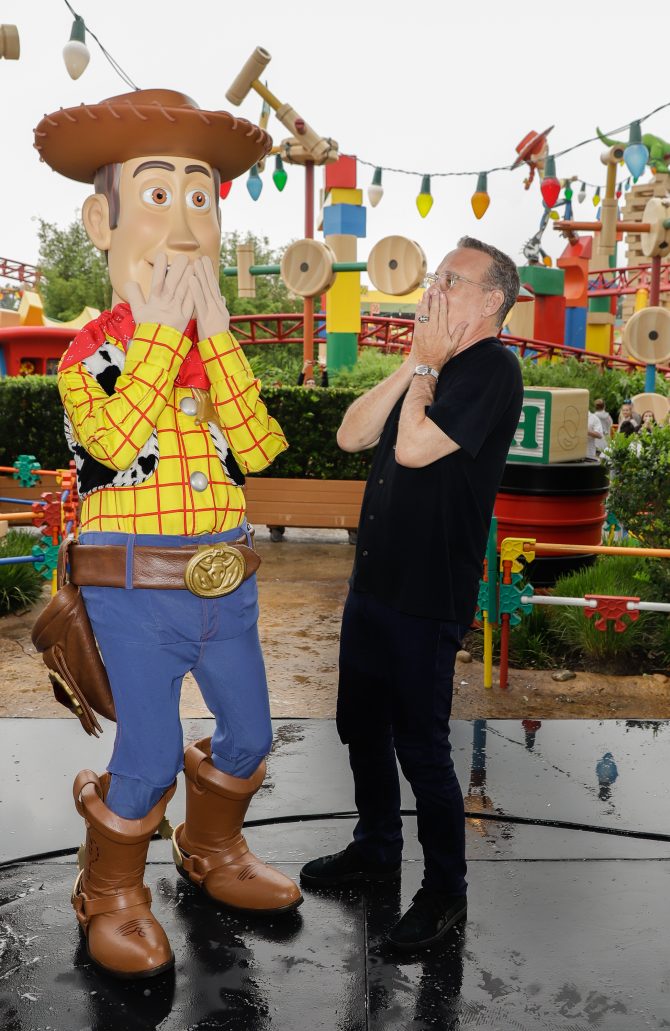 That quote right there stuck with me the most during this press conference, as that story really goes to show the profound effect and emotional connection so many people feel about the characters of Toy Story, and why Toy Story 4 is here to allow us to continue our story as audiences with these characters that feel like family.

Toy Story 4 is coming to theatres June 21st! You can read my spoiler-free review here. You can also check out my post from when I visited Pixar Animation Studios to take a stroll down memory lane, and see the evolution of animation from the first to fourth Toy Story here. Tickets are now on sale for Toy Story 4, as well as the opening night fan events. 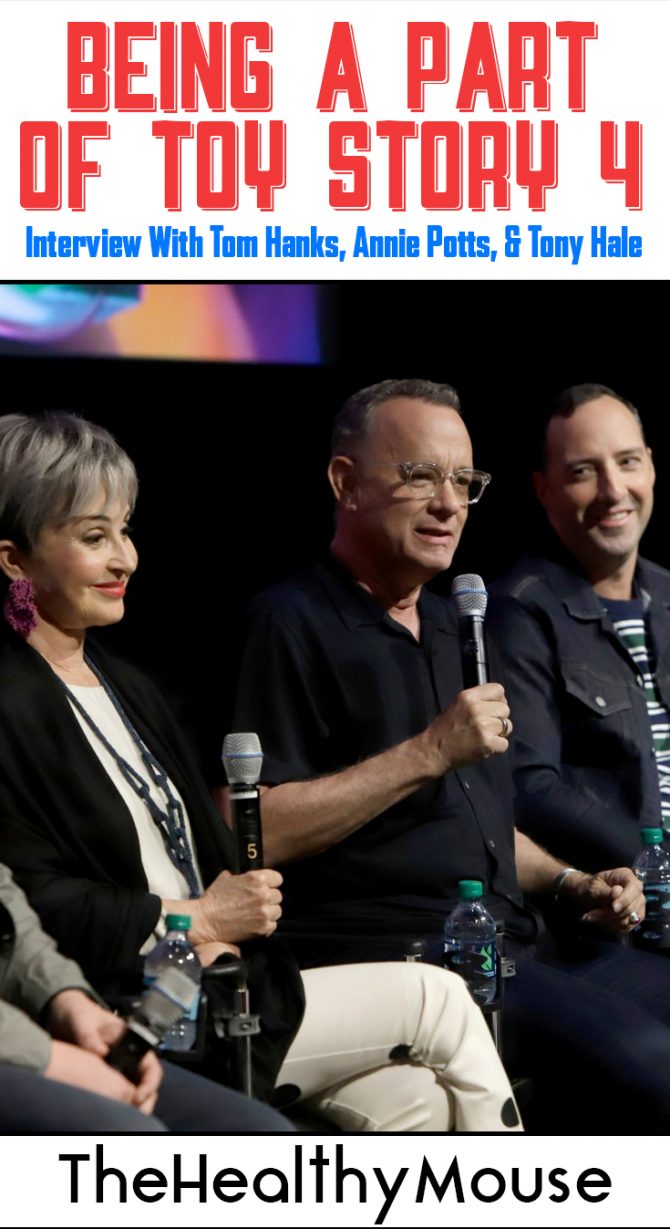