I recently had the once in a lifetime opportunity to attend interviews with the cast of Thor: Ragnarok (which I must say, is currently my new favorite Marvel film). In attendance was producer Kevin Feige, director Taika Waititi, and the stellar cast: Chris Hemsworth, Mark Ruffalo, Cate Blanchett, Tom HIddleston, Jeff Goldblum, Tessa Thompson, Karl Urban, and Rachel House. 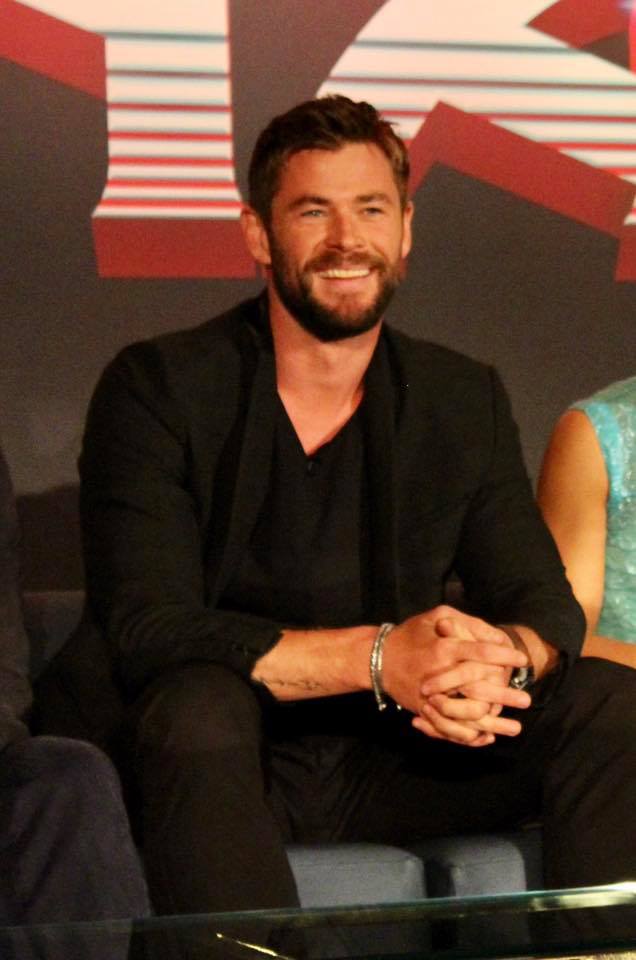 Chris Hemsworth (Thor) speaks about how Thor: Ragnarok is quite unique compared to previous Thor films:

“Taika Waititi, basically. I think we all had a, a vision, and an
idea, and a want to do something vastly different than what we’d done before, and take it to a different place. And that meant kind of doing away with what we knew, and just
reinventing it, and it all came from his crazy, wonderful brain, and his inspiration, and him pushing us every day on set, and constantly encouraging us to improvise, and explore, and take risks. And it was one of the most enjoyable experiences I’ve ever had on a set, and a film that I feel the most proud of, just because of this – this whole team, and the collaboration, and fun we had.” – Chris Hemsworth

Taika Waititi has much experience as a director, but this is his first time directing a film to this scale. He tackled this massive project by staying true to his directing style:

“I knew my strengths were just like tone, character, and you know, relationships, and things, and I had to ignore the scale of this monster, this beast, you know it’s a huge, huge film. And what can be distracting on set is if you look over your shoulder, and you see 300 people standing there. … [cont’d.] I just had to keep reminding myself what’s more important is what’s inside the rectangle, and usually, it’s two or three people trying to remember their lines. And so it doesn’t matter the scale of the film – that’s always the same, you know. So I just focused down on what I was used to, which was what’s in front of the camera.” – Taika Waititi 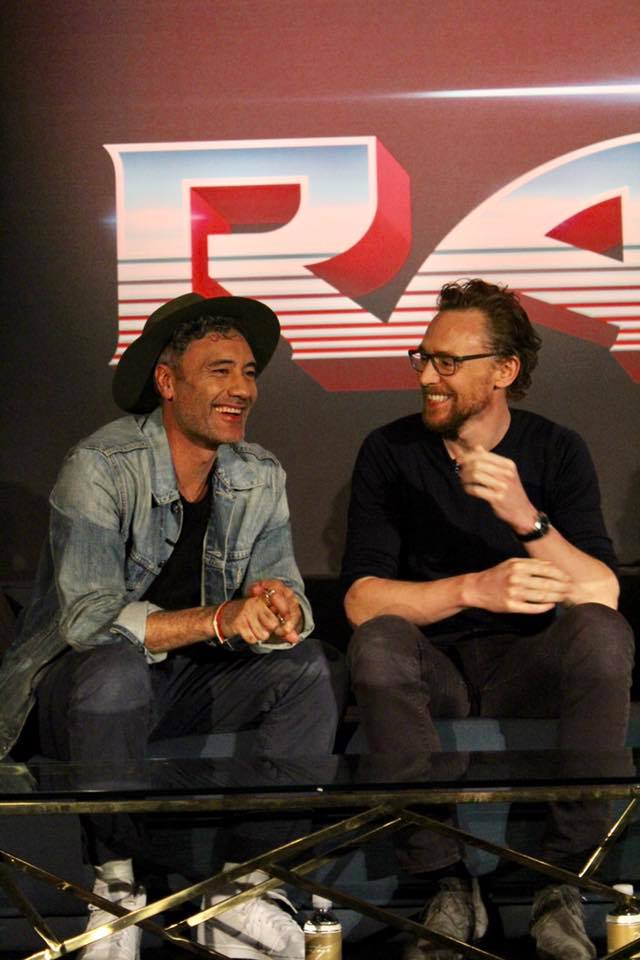 Thor: Ragnarok is the first Marvel film that actor Jeff Goldblum (the Grandmaster) is a part of, and discusses what it was like to be a part of the Marvel Cinematic Universe:

“…I like the character [the Grandmaster], of course, and the opportunities in the character. Joining a group like this, a cast like this is a dream come true. Taika – working with Taika, that was my first, you know, connection point to the movie. We had a meeting, and hit it off, and he said what we were gonna do, and improvise, and have fun. But then, you know, Kevin Feige and Louis D’Espesito, and Victoria Alonso, and Brad Winderbaum – the whole upper tier of creative leaders, do something unique. They know how to make these epic productions, and popular movies, but they want to make good movies. And they somehow uniquely know how to do them, that feels to me like an actorly, workshop-y, character-y, improvisatory, delightful experiencet…. [cont’d.] I’m grateful, overwhelmingly grateful.” – Jeff Goldblum 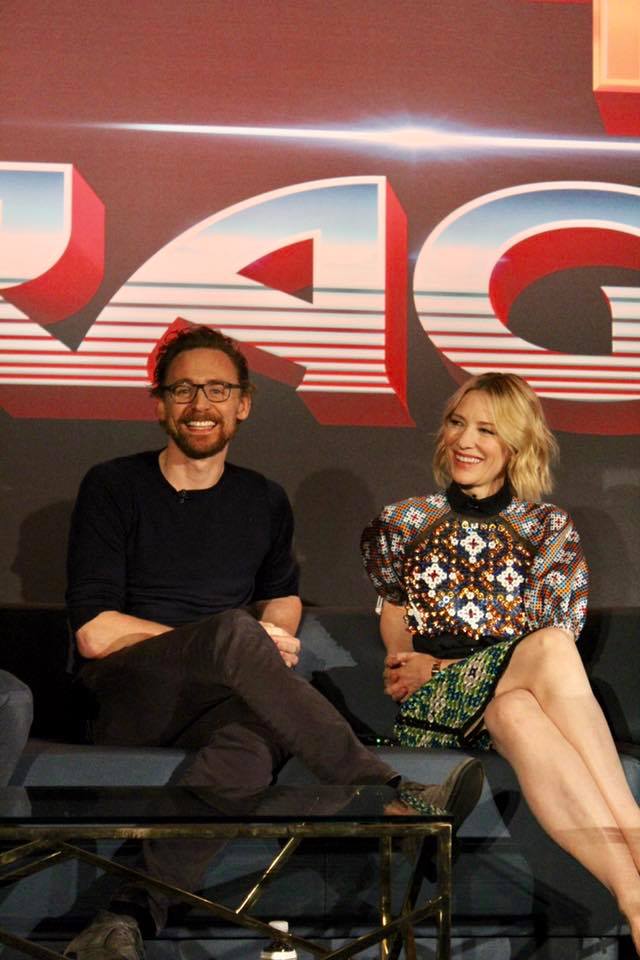 This is Cate Blanchett’s first Marvel film as well, who plays the Goddess of Death, Hela. I loved being able to hear a bit about her inspiration for the look of Hela, and how she pulled from the original comic books as well as fan interpretation:

“…I went back to two things, primarily. I went back to the extraordinary images that are there in the original comics, and then I went to the fan base, ‘cause there’s all these
Hela fan girls who are doing these extraordinary make-ups online. And so when we were thinking about what she’d look like visually, I went to that. So I started with the
visual, rather than the textural, I think.” – Cate Blanchett

As for the actor’s of Thor:Ragnarok’s future in the Marvel Cinematic Universe, there are some thoughts and opinions on the table: 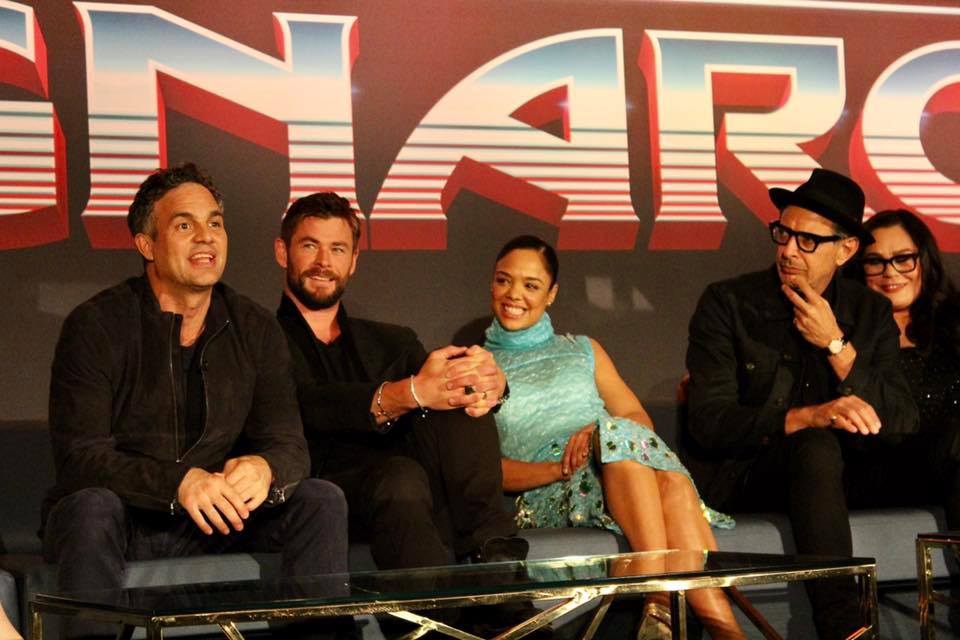 Tessa Thompson (Valkyrie) suggested to Kevin Feige there be a movie with all of the Marvel female superheroes. Feige admitted that would be a cool idea! (So all of our fingers crossed that dream will become a reality some day).

Mark Ruffalo (Hulk) is excited for his character’s stories over the course of the next few Marvel films, and would love to also to someday do a standalone Hulk film.

I loved hearing about the process of making Marvel’s latest film, Thor: Ragnarok, as well as a hint of the future of the direction these characters might be going! Thor: Ragnarok is definitely a film you don’t want to miss! You can catch it in theaters November 3rd, with tickets on sale here.