Disclosure: I was invited to attend this media event and interview to cover on my blog, all thoughts and opinions are my own.

An Evening at the Hollywood Pantages With Thomas Schumacher

Something you may not know about me that’s a major part of my background, is that I love theatre! I did theatre for years, starting out in college as a theatre major and even met my husband of eight years when we did a show together (Much Ado About Nothing, if you were curious). One of my favorite things in the world, which I admit I haven’t done nearly enough of since Amelia was born, is seeing a musical. When I walk into a theatre, particularly the Hollywood Pantages which is gorgeous and a rare treasure still standing in Los Angeles, I feel at home.

I feel a combination of adrenaline and contentment, eager to experience the energy and talent that will be onstage while feeling connected to a space filled with history and other creatives. I received an invitation to see Frozen at the Pantages, which I recently experienced on Broadway during my first trip to New York last month. Preceding the show, I would get to interview a producer as well as President of Disney Theatrical Productions. We would get to discuss his experiences in this role, as well as the third edition of his book that was just released, How Does the Show Go On? 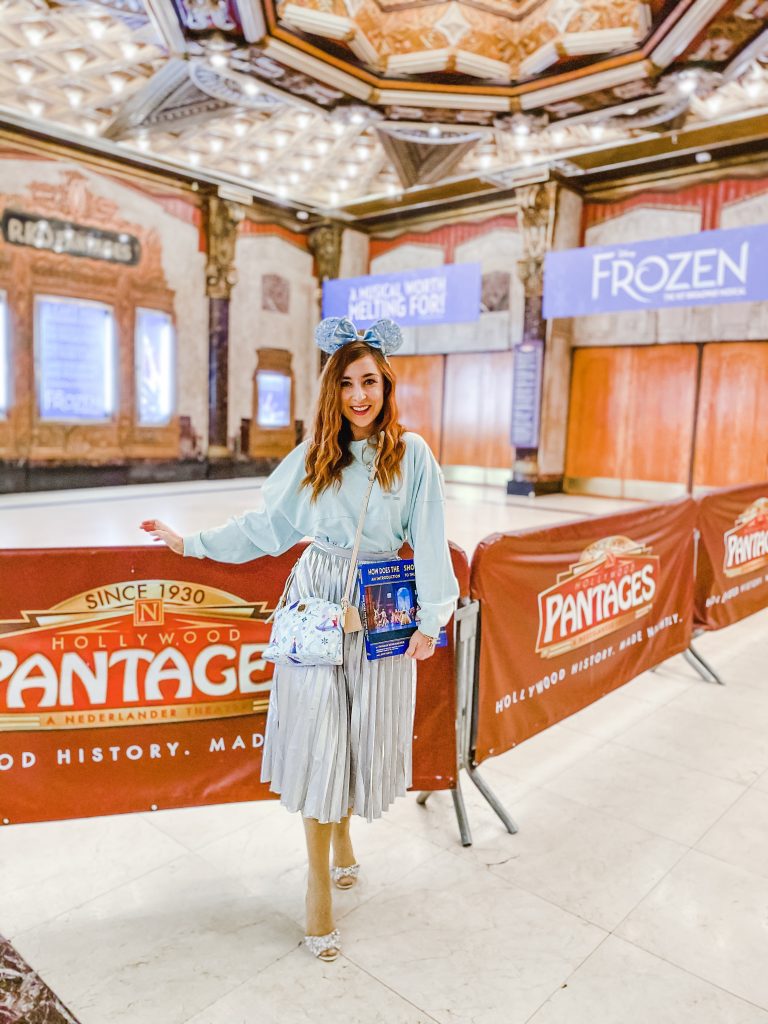 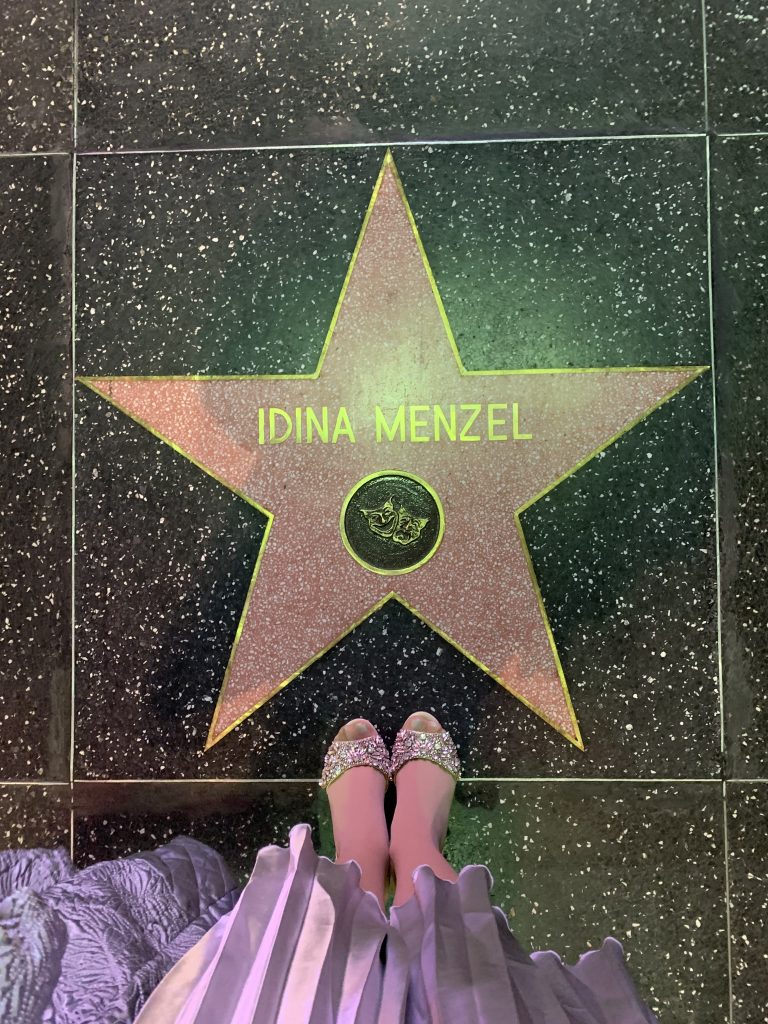 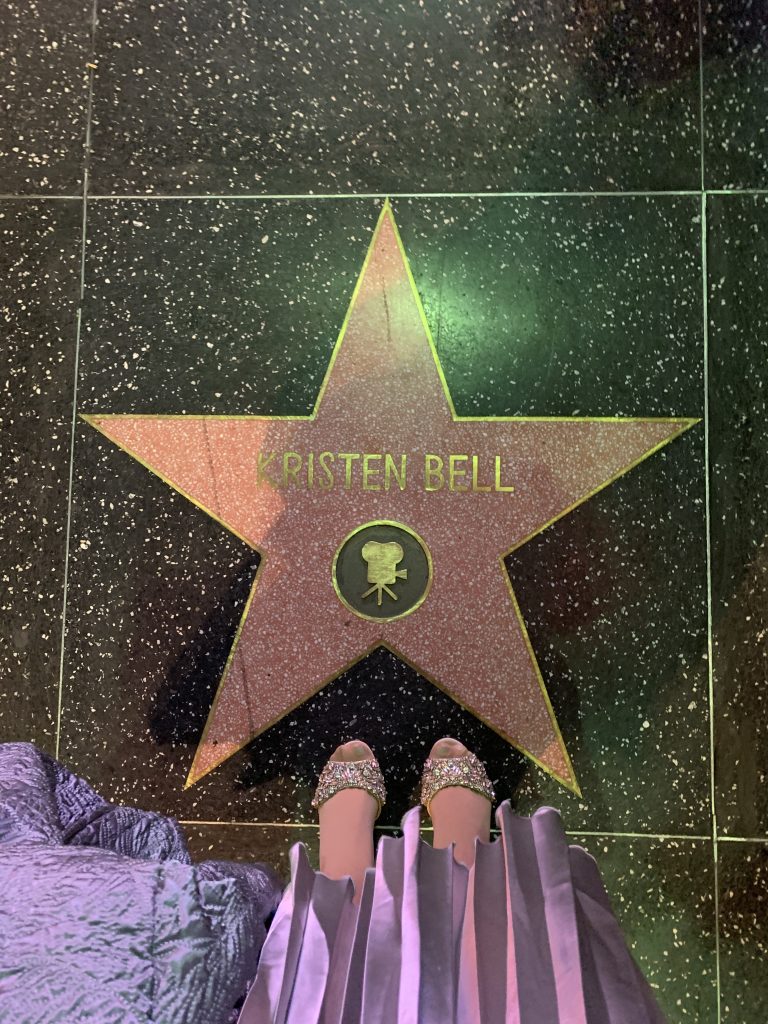 I got dressed head to toe in Frozen themed clothing (you know I have to go all out for a Disney-themed event, particularly if it’s Frozen!), and headed to Hollywood. As I walked up to the Hollywood Pantages, the evening ahead of me was all becoming more real as I looked down at the Hollywood Walk of Fame and found the newly installed stars of Kristen Bell and Idina Menzel. Idina Menzel’s star made me flashback to the fond memories I have of visiting the Pantages during the early days of dating my husband, where we saw Wicked there. I look up and see the Pantages’ marquee displaying the Frozen on Broadway logo, topped with Christmas trees. I love that they still decorate the theatre in the style of old Hollywood!

As I stand outside with my copy of the book in hand two hours before the show starts, we are taken into the theatre’s basement. Along the walls we can see signed posters from past performances, and I’m already feeling that amazing kinetic theatre energy throughout the hallways. It’s time to get seated for the interview! 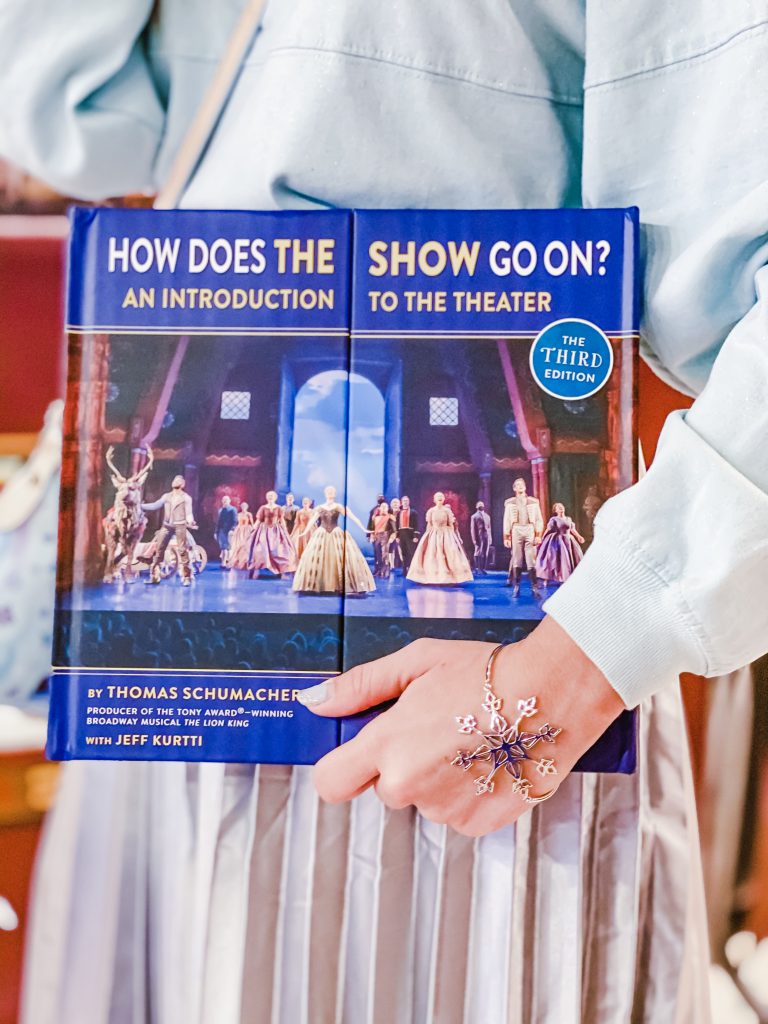 Disney Theatrical Productions is quite unique, unlike any other production company. It started to create Beauty and the Beast for Broadway, and prior to that Disney did not have experience at all in the Broadway space. For their first production they leased the New Amsterdam Theatre in New York and completely renovated it. That’s pretty unheard of to have no Broadway experience, then lease and renovate a historic theatre for your very first production! But of course if any company could pull off that kind of magic, it would be Disney.

Now today, they are not only thriving having made several Broadway adaptations of their films, but dominate Broadway! Currently in New York you can find Frozen, The Lion King and Aladdin (which is what currently is in the New Amsterdam Theatre). And they’re able to do that for a simple reason: People crave Disney magic, and you can experience Disney magic to its fullest when seeing your favorite stories come alive on stage. With such a unique Broadway story and successful business Disney Theatrical Productions has become, I couldn’t wait to hear about the experiences Thomas Schumacher has had over the 25 years since they first began.

The instant Thomas Schumacher began to speak, you could tell why he’s so great at what he does. He’s not only an incredibly kind person, but he is an amazing storyteller. (And on this day December 5, it was his birthday, same as Walt Disney…seems to be something coincidental with the storytelling knack and this date!) Schumacher’s journey with Disney began 32 years ago working on The Rescuers Down Under. Through that time, he has seen a lot of books written about Disney’s history.

When he left the animation side of his career and was focusing on his one job with Disney Theatrical Productions, he told his friend Jeff Kurti (who wrote the forward for How Does the Show Go On?) that he wanted to write a book. Kurti asked him, “what would it be about?” To which Schumacher replied:

And Kurti’s reply: “When do we start?”

As mentioned earlier, this is the third edition of this book. The first edition of this book released in 2007, and an aspect that was very unique about it was including Jeff Kurti’s idea to make it an “artifact book.” There were tangible objects in the book, such as a Broadway-style theatre ticket. For people who are learning about theatre or perhaps aren’t able to go to a Broadway show, this was a great learning tool and a special thing to have on your bookshelf.

With technology changing and more shows being added under Disney Theatrical Productions belt, they wanted to create newer editions of the book. While the artifact book concept was great for collectors, it wasn’t a version being able to be used by libraries. However since so many people enjoyed the artifact book, they wanted a concept of an interactive book to live on with the newer editions of How Does the Show Go On? The goal for a different way to make the book interactive in newer editions led to the implementation of DisneyScan.

Throughout the book, there are several images that have a “DisneyScan” logo next to them. Here’s how it works: you download the DisneyScan app from the App Store, then open up the app and hover your phone’s camera over places in the book with the logo. Then, the image will come to life on your phone’s screen. For example, you can see a still image of a make-up artist backstage in Disney Broadway’s Aladdin applying make-up to an actor. Once you scan the image with the DisneyScan app, you then see a video of this photo in action, the moment the make-up artist is working along with an interview with her.

Even if you’re too young to read this book but have an interest in theatre, or maybe you’re short on time and want to take in snippets of How Does the Show Go On? here and there, you can learn what the book is teaching you by watching these videos. Or if you’re reading the book like me, it makes what I’m reading feel very intimate, like I’m part of the experience backstage when I see these photos come to life. Another benefit is that they can constantly update what is shown in the book when you use DisneyScan, expanding the ability to have the book updated more frequently.

While this book is about theatre in general, all of the photos throughout the book are from Disney Theatrical Productions. Schumacher said he is often asked why the book only features Disney. Schumacher has now produced ten shows for Disney, so he has a longtime passion and relationship with Disney theatrical. Most importantly, many of the people in the book are friends of his from his time at Disney, making the story he is telling all the more meaningful to the author and more authentic to the reader. I absolutely love that! He also shared how each person who is in the book is paid for having their image used. And most everyone uses that payment to donate books to kids in the arts. It goes to show the passion the actors and crew have for sharing their love of the arts! 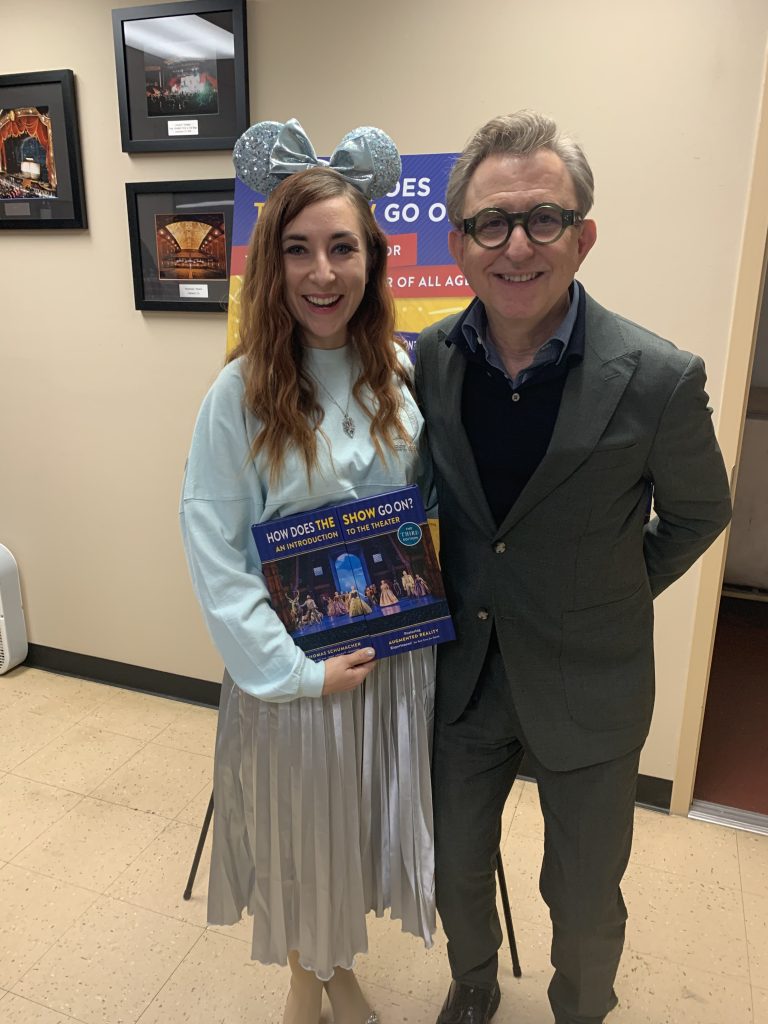 Schumacher’s hope with this book is to not only help people understand theatre, but to show everyone that they can have a life and career in the theatre. When he began the journey of creating this book, he didn’t want it to be too academic or formal. Rather, he wanted people to enjoy reading this book because they love theatre. It’s about the jobs in theatre, a life in theatre, and most importantly: it’s about the people involved and celebrating expertises and passions.

In the last portion of the book, Schumacher gives those interested in a life in theatre a task. He provides ways you can put your love of theatre to action and be involved. This book is truly special in that it doesn’t just indulge one’s desire to read and learn about theatre, but it helps provide some guidance on what to do with that love while encouraging that everyone, no matter what your talents, can be part of a production. The third edition of How Does the Show Go On? is available now!

And if you enjoy this book, you can find some more amazing Disney books by Jeff Kurti here.

Frozen at the Hollywood Pantages

After the fantastic stories and conversation with Thomas Schumacher, it was time to ascend up the steps to the stunning Pantages lobby. As we went into the theatre, we examined the arches over the stage, since we just learned in the interview prior that it’s filled with little hidden nods to Disney films (which is written about in the book, too). While I had just seen the show on Broadway in New York, I was excited to see this production since it would include a new song that was written just for the North American tour. I was also interested of course to see what the new cast was like, and it’s always a joy to be seeing shows at the Pantages. 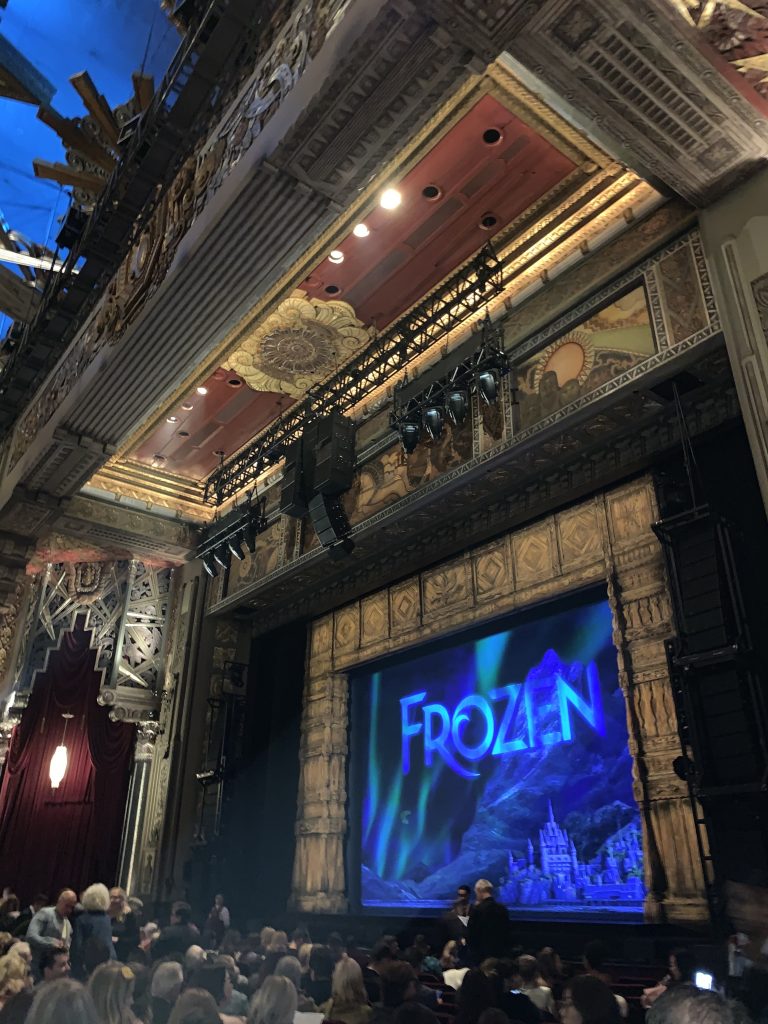 The cast was absolutely flawless, and “Let it Go” was incredibly stunning and powerful. To end what was one of the most memorable evenings of my career as a blogger (and as a Disney fan), we went to stage door and were able to have Mason Reeves (Kristoff) and Collin Baja (Sven) sign our Playbill. As we walked away from the theatre, I looked back at the marquee topped with Christmas trees, and couldn’t help but feel emotional to think I was experiencing a piece of Disney history, the opening of Frozen’s very first North American tour performance. 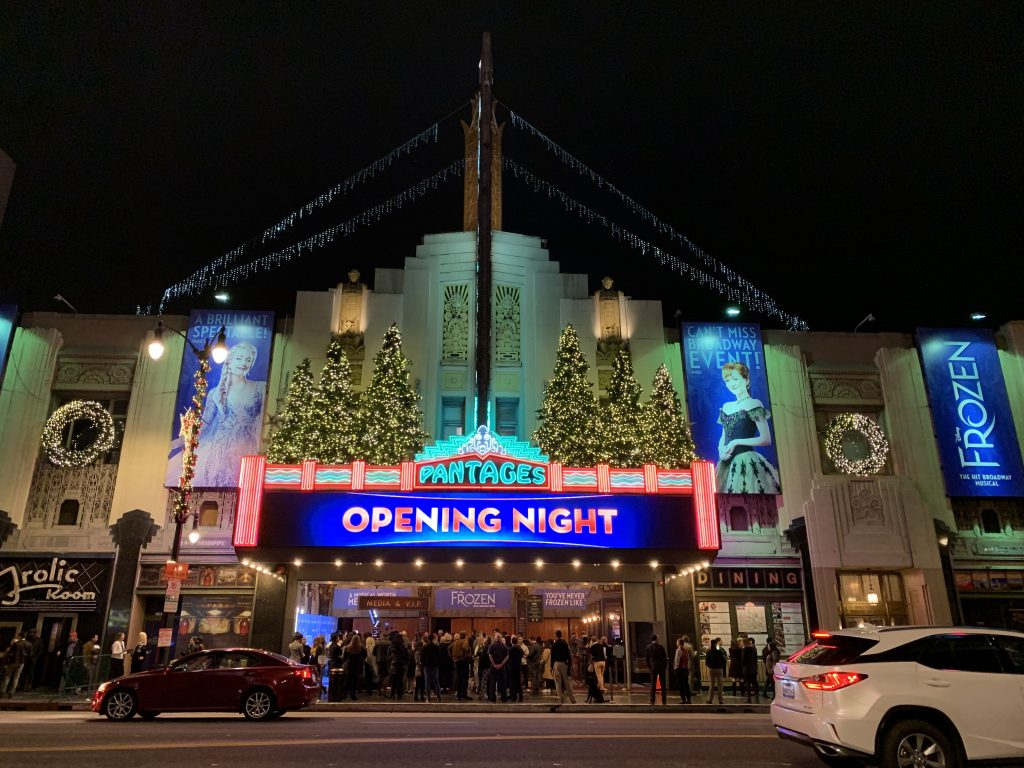 By Jessica
0
disney broadwaydisney frozendisney theatrical productionsdisneyscanfrozen pantagesfrozen pantages reviewhow does the show go on third editionjeff kurtithomas schumacher
Spies in Disguise: First Animated Fox Film Since Disney Acquisition – What Was it Like?
The Strong Female Characters of Star Wars: The Rise of Skywalker