Marvel Studio’s What If? Introduces the MCU Multiverse with Beautiful Animation

Earlier this year, in the virtual press conference for Disney+’s WandaVision, Marvel Studios President Kevin Feige said that his aim for the streaming platform’s slate of titles (which have since included Falcon and the Winter Soldier and Loki) was to tell stories that otherwise couldn’t be told in the feature length films. Without a doubt, What If? fits that description. Marvel Studios’ first fully animated series premieres on Disney+ today, but it is more than just a cartoon show. True to the inter connectivity of the web of the MCU, What If? is an important piece as it gives the first glimpse at what may lie in the future for our favorite characters. It offers us the first look at the MCU Multiverse.

Doctor Strange first introduced the term “Multiverse” to the MCU way back in 2016. Since then, fans have been eagerly awaiting to find out how the multiverse (a system of alternate realities) will impact the stories. Surprising many, Marvel Studios has used its Disney+ offerings to fully introduce this monumental storyline into the MCU, most dramatically with Loki, which premiered last June, as the season ended with the so-called Sacred Timeline, unraveling into the chaotic multiverse it once was.

How this will effect the MCU as a whole is anyone’s guess (and there are a lot of guesses). It’s rumored that the events of WandaVision and Loki will lead directly into future feature films like Spider-Man: No Way Home and Doctor Strange and the Multiverse of Madness. Until then, Disney+ gives us another puzzle piece to the multiverse mystery with What If?

The Watcher (voiced by Jeffrey Wright) in Marvel Studios’ WHAT IF…? exclusively on Disney+. ©Marvel Studios 2020. All Rights Reserved.

Inspired by the comic series of the same name that started in 1977, the series is “hosted” by the Rod Serling-like Watcher, who displays all the different stories in the infinite multiverse. Actor Jeffrey Wright described the character as the ultimate Marvel fan, obsessed with the stories and the heroes within them, but unable to interfere due to his pledge of neutrality.

Each episode gives a glimpse of a different reality, where one change leads to a drastically different universe, sometimes for good, sometimes for bad. I was able to preview the first three episodes of the animated series before its premiere.

The first episode is one of the most eagerly anticipated of the new series, and one of the most advertised. In an alternate version of 1942, an injured Steve Rogers is unable to complete the procedure to become Captain America. Instead, Agent Peggy Carter takes the serum, becoming a new kind of World War II hero, Captain Carter. The episode does well at reinterpreting crucial moments of 2011’s Captain America: The First Avenger while welcoming back fan favorite Agent Carter, once again played by Hayley Atwell. Interestingly, Executive Producer Brad Winderbaum said that in constructing the first season, they found fun connections between Carter and the omniscient Watcher, going so far as to suggest her presence later in the season and into the already-in-production second season.

Captain Carter (center) and the Howling Commandos in Marvel Studios’ WHAT IF…? exclusively on Disney+. ©Marvel Studios 2021. All Rights Reserved.

The second episode is destined to be a popular one, bringing back the late Chadwick Boseman in his iconic portrayal as T’Challa. But in this reality, he is not the Black Panther. Here, the ravager Yondu (Michael Rooker), intending to pick up a young Peter Quill, instead entrusts his men to do it, which leads to them mistakingly abducting young T’Challa from Wakanda, which then leads to the young prince becoming the legendary outlaw Star Lord. Except now, this Star Lord is a much more respected Robin Hood-like figure than Peter Quill ever could have hoped to be. Writer A.C. Bradley said the premise of the episode came from the realization that Peter Quill and T’Challa are the same age, and the story grew into what would happen if there was a mix-up in their destinies, specifically, how would T’Challa affect the galaxy if he didn’t affect Wakanda?

T’Challa/Star-Lord in Marvel Studios’ WHAT IF…? exclusively on Disney+. ©Marvel Studios 2021. All Rights Reserved.

The third episode is an interesting departure from a simple “What if?” narrative, leaning more into the mystery genre. Bradley also said that the stories never actually came from asking “what if,” rather came from the characters and how characters would act in situations we’ve never seen them in before. This episode focuses on Nick Fury (Samuel L. Jackson) during his infamous “Big Week,” a period of time covered in Iron Man 2, The Incredible Hulk, and Thor, where Fury handled increasingly dangerous situations while recruiting for his not-so-infamous Avengers Initiative. Without spoilers, this episode’s question could simply be “What if Fury’s Big Week went as badly as possible?”

Since each episode plays on the expectations of the viewers, a good understanding of all 23 MCU films is probably a good idea. Trailer footage also suggests storylines where Steven Strange falls to Dark Magic, where Eric Killmonger saves Tony Stark’s life, and where Ultron is successful in uploading himself in the android body that we know to belong to the Vision.

Even without the extensive knowledge of a Watcher-level fan, there is plenty to be admired about the new series. For one the animation is beautiful, blending computer graphics with 2-D drawing styles, similar to the Marvel/Sony Animation film Spider-Man: Into the Spider-Verse. The animated feature of the series allowed the creative team to recreate key moments in the MCU’s history, which couldn’t have been done in a live-action project.

The voice cast is pretty unprecedented as well. Aside from the great vocal talents of Wright, who worked with the producers to separate his version of the Watcher from the comic’s version, incorporating a slightly more casual tone while keeping the galactic importance, the cast also features most of the original actors from the original films reprising their roles. There are a few actors here and there that noticeably were not able to return, including Scarlett Johansson, also actor Lake Bell fills in with a pitch-perfect imitation.

It will be interesting to follow as the series progresses, perhaps even outside of its own anthology-based premise, as the show runners suggest it might. As many other ponder, how will this connect to the main MCU timeline, and will we see characters like Captain Carter feature in live action projects? While it seems more than likely, knowing Marvel Studio’s love for interweaving worlds, Winderbaum had only tight-lipped, diplomatic responses: “There’s always strange alchemy at work. You never know. [The episodes] could all connect. We’ll have to see.”

And in response to if there’s a chance Jeffery Wright’s Watcher will join the live action MCU in the future, Wright’s only answer was: “What if?” 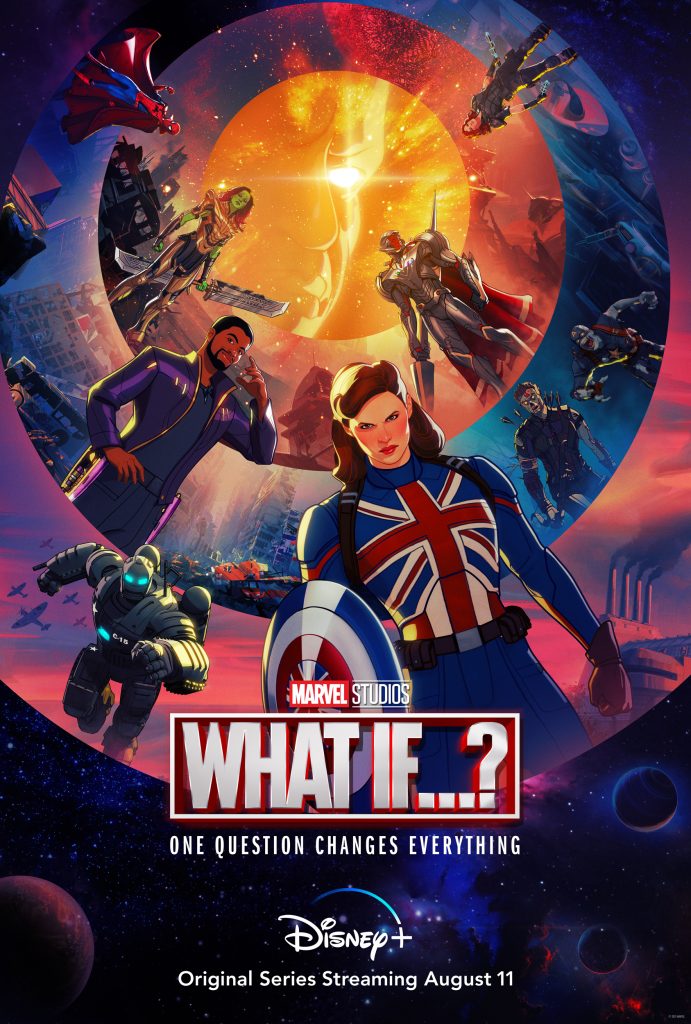