Disclosure: This visit to Universal Studios Hollywood was provided complimentary but all thoughts and opinions are my own.

It’s my favorite time of year right now at Universal Studios Hollywood: Grinchmas and Christmas in the Wizarding World of Harry Potter! There’s nothing quite like experiencing the holidays by meeting the Grinch and Max, or strolling through Hogsmeade decked out in holiday lights while sipping on a butterbeer. Those are a few things that makes holidays at Universal Studios Hollywood the most magical time to visit! 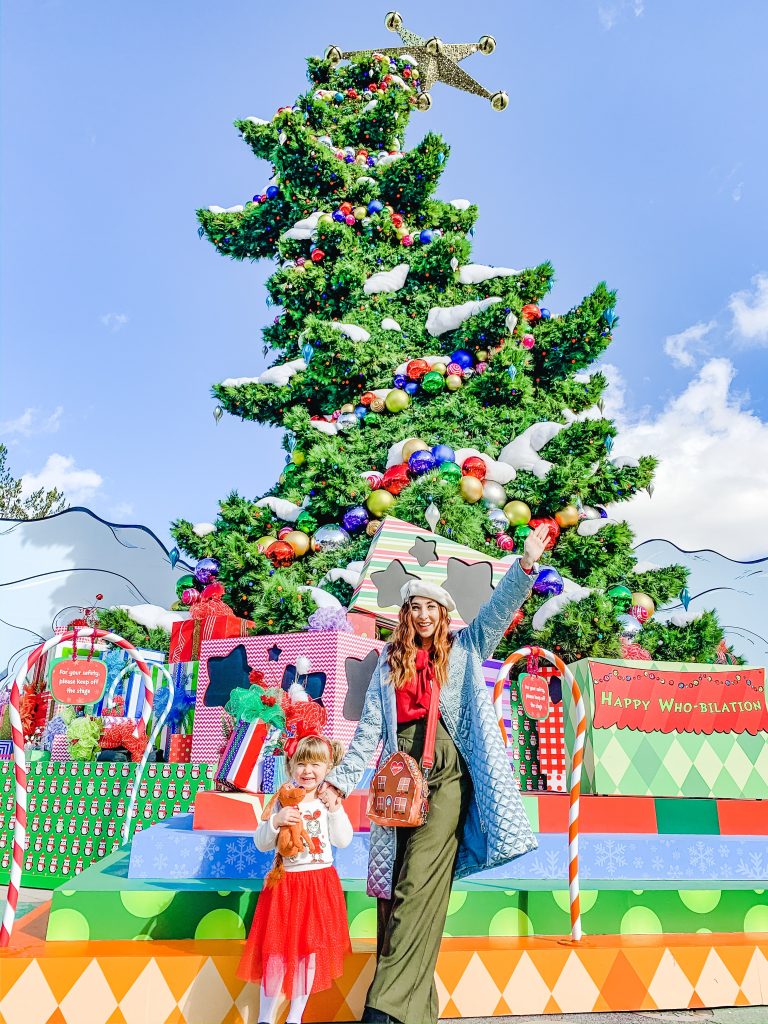 In this post, I’ll be sharing all the things you can do during holidays at Universal Studios Hollywood, as well as a recommended itinerary to be able to do all the seasonal things they have to offer!

Last year, Grinchmas was only on the weekends until it got closer to Christmas day. This year, it’s a Whobilation everyday until December 29th! You can head to the courtyard on the Upper Lot at Universal Studios Hollywood to do the Grinch and Max meet-and-greet.

These are absolute must-do’s if you’re visiting during the holidays! The Grinch looks exactly like the one from the Jim Carrey film, and is incredibly fun to interact with. My four-year-old was getting a little nervous to meet him as we approached the front of the meet-and-greet line but the Grinch was great at making her feel comfortable and she got over her nervousness very quickly! 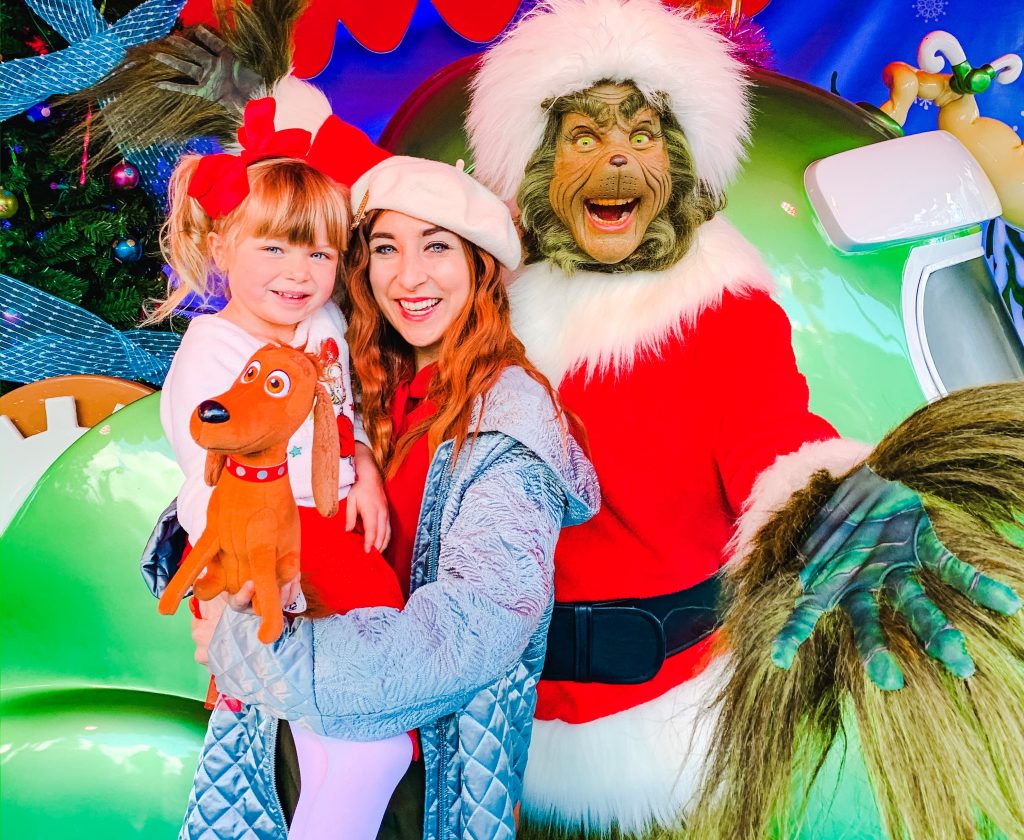 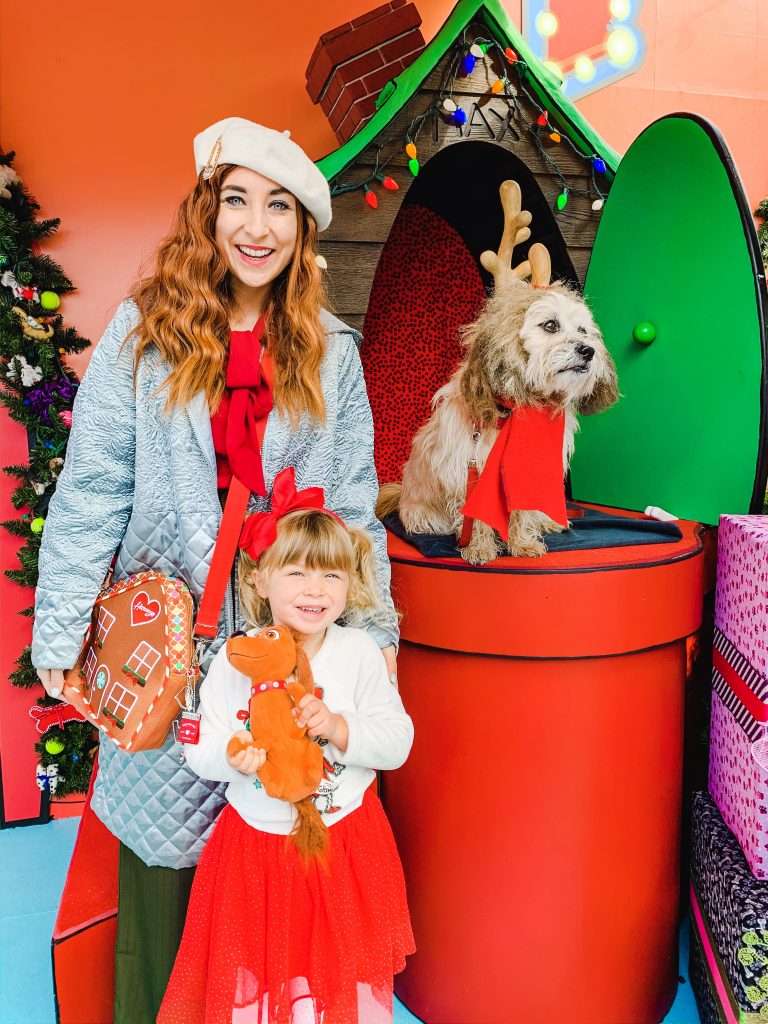 I recommend heading to the Grinch meet-and-greet first, as the line can get pretty long. After you meet him, head on over to meet Max, who is a real live dog! The Max is always so sweet, and my daughter’s favorite character to meet during Grinchmas. After the Grinch and Max, enjoy meeting other character in Whoville who mingle in the courtyard, including Cindy Lou Who and Martha May. 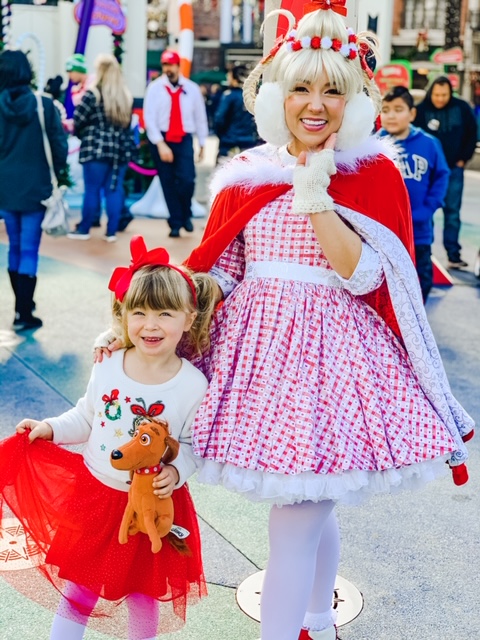 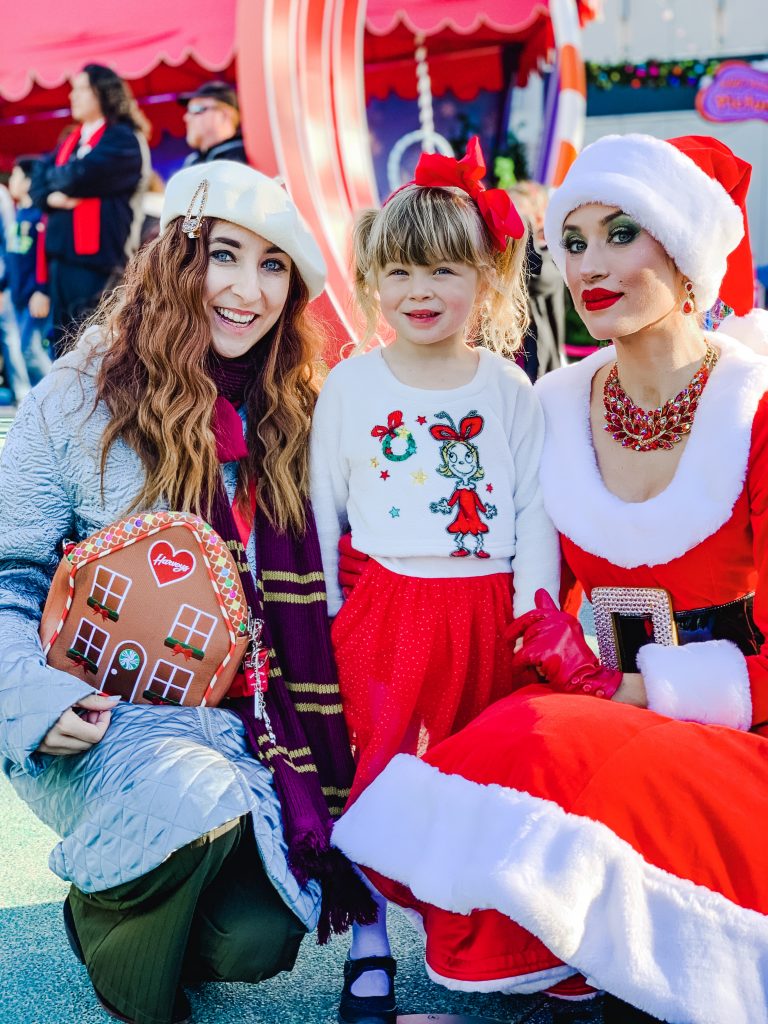 Aside from the meet-and-greet characters, there’s also a letter writing station where you can mail a letter to the Grinch, a holiday treat stand, and vehicle props from the How the Grinch Stole Christmas film. In the evening time, beginning around 5:30pm and then onward every half hour you can enjoy the Grinchmas tree lighting, which is preceded by the Whoville characters telling the story of “How the Grinch Stole Christmas.” When you are in the park, you can find on the showtimes board the suggested viewing times each day (meaning the showings that are less crowded). 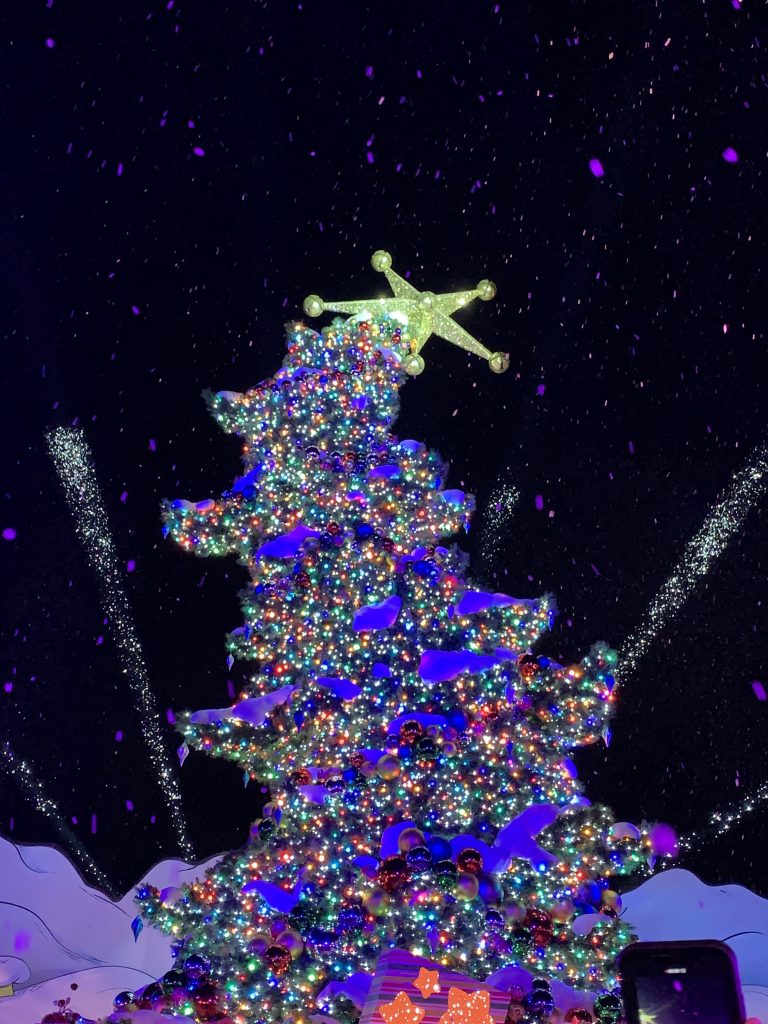 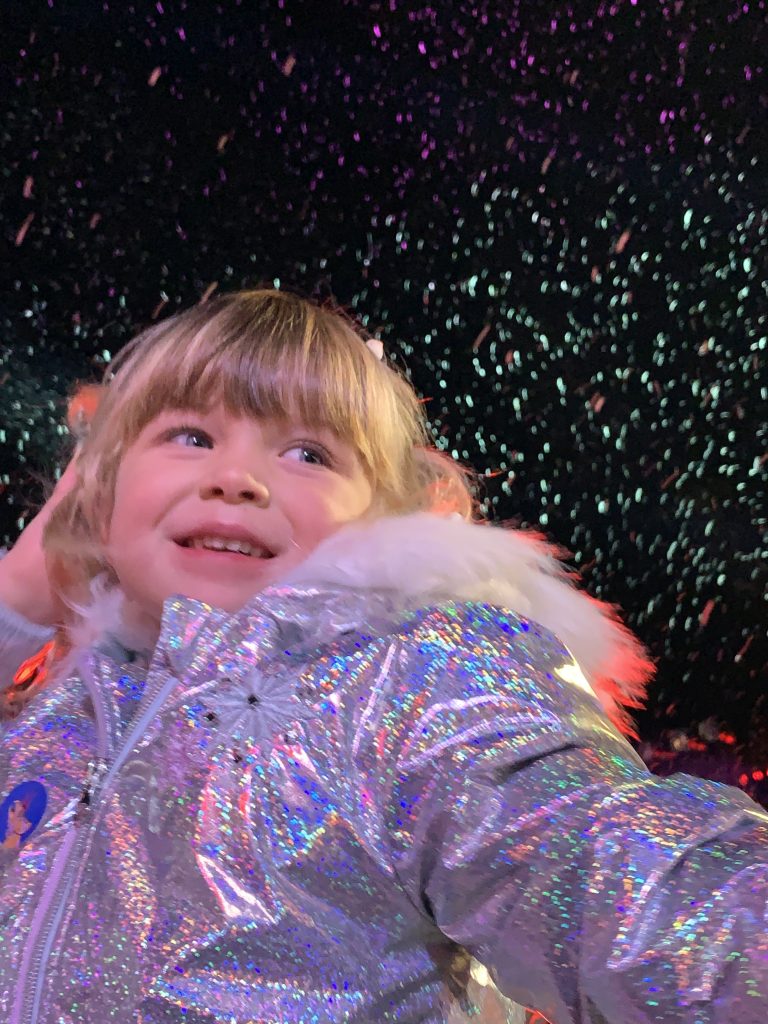 Seeing the tree lighting is an absolute must, as it ends with a snow flurry, along with the citizens of Whoville going around the courtyard to do more meet-and-greets and have a Whobilation with you! 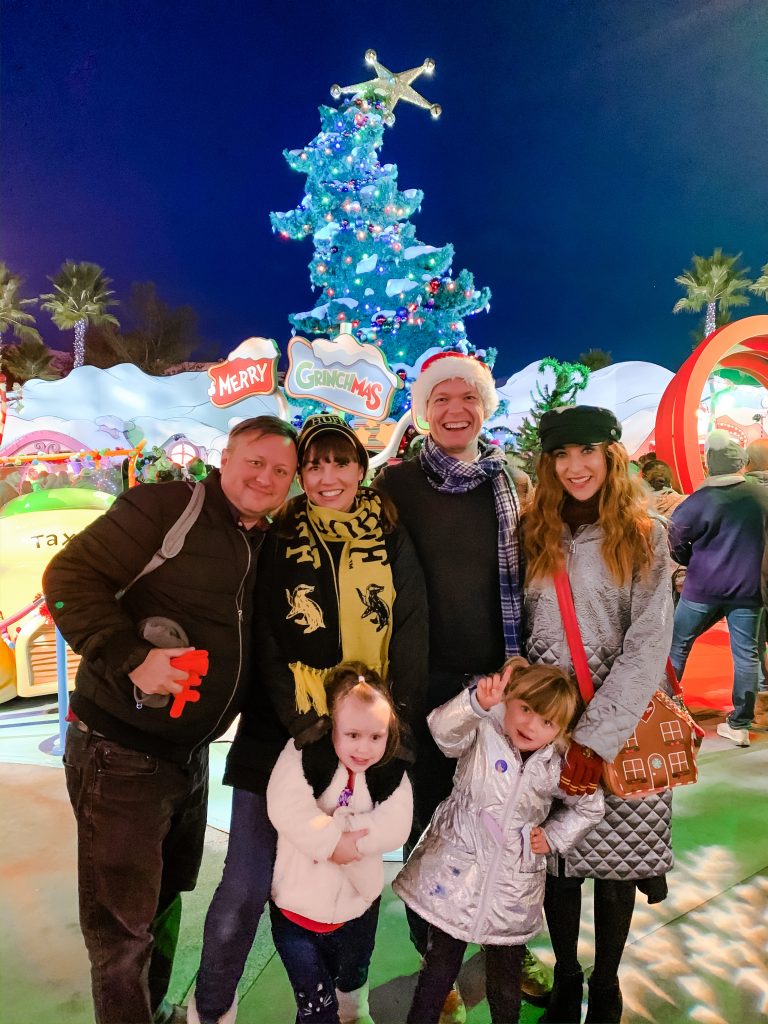 Christmas in The Wizarding World of Harry Potter

The evening time is the best time to visit The Wizarding World of Harry Potter during holidays at Universal Studios Hollywood! Hogsmeade is decked out in holiday decor, and in the evening their Christmas lights turn on. It has a very enchanting look alongside the Hogsmeade shop windows lit up at night. 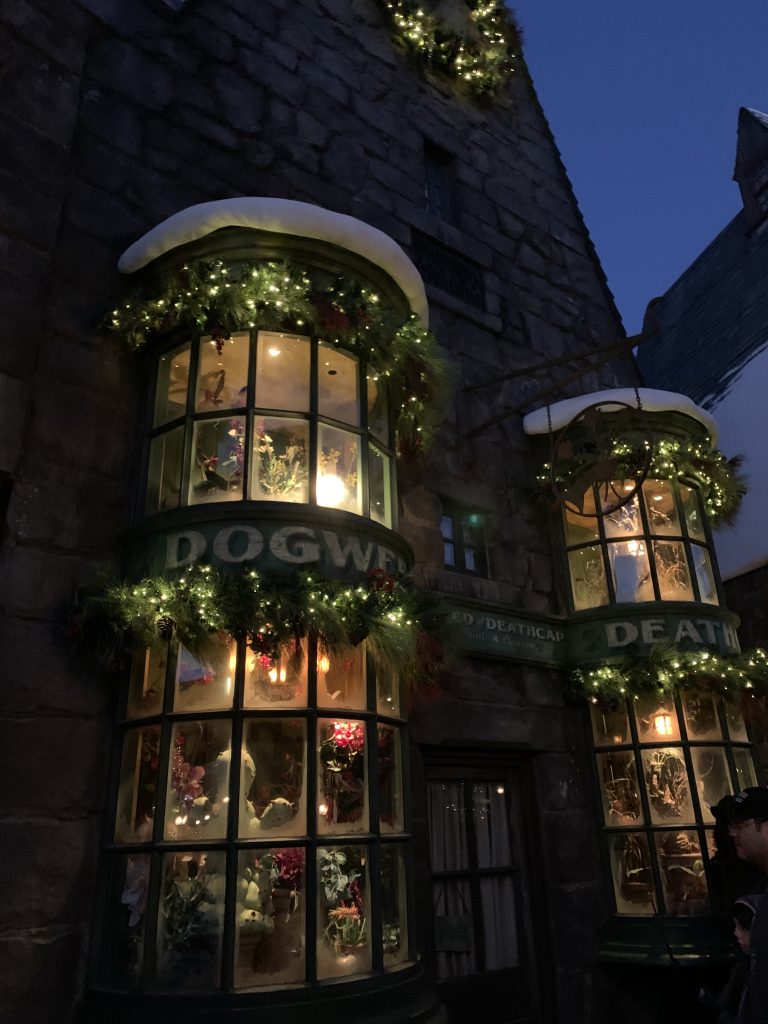 You can grab a butterbeer (they even have hot butterbeers available inside The Three Broomsticks), sip and stroll as you enjoy the decor. The A cappella Frog Choir even have holiday themed songs during their performances. It’s fun to watch the latest performance of the day and then stay where you watched the show to have a great spot for the Magic of Christmas at Hogwarts Castle light show. 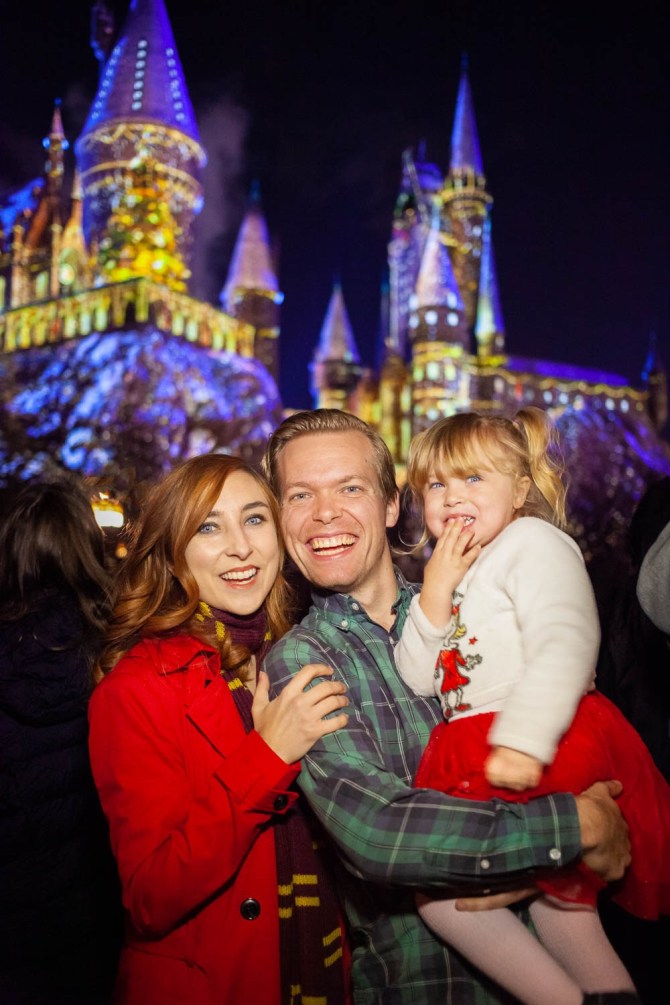 Each year my family and I look forward to this show, which plays at 6pm and typically every half hour after that. You will definitely want to show up about 20 minutes ahead of time (or sooner if seeing the first show) to get a good spot. Like with the Grinchmas tree lighting, they also have a list of recommended viewing times each day. While you’re visiting The Wizarding World of Harry Potter, you can also find lots of Harry Potter/Hogwarts-themed holiday merchandise! 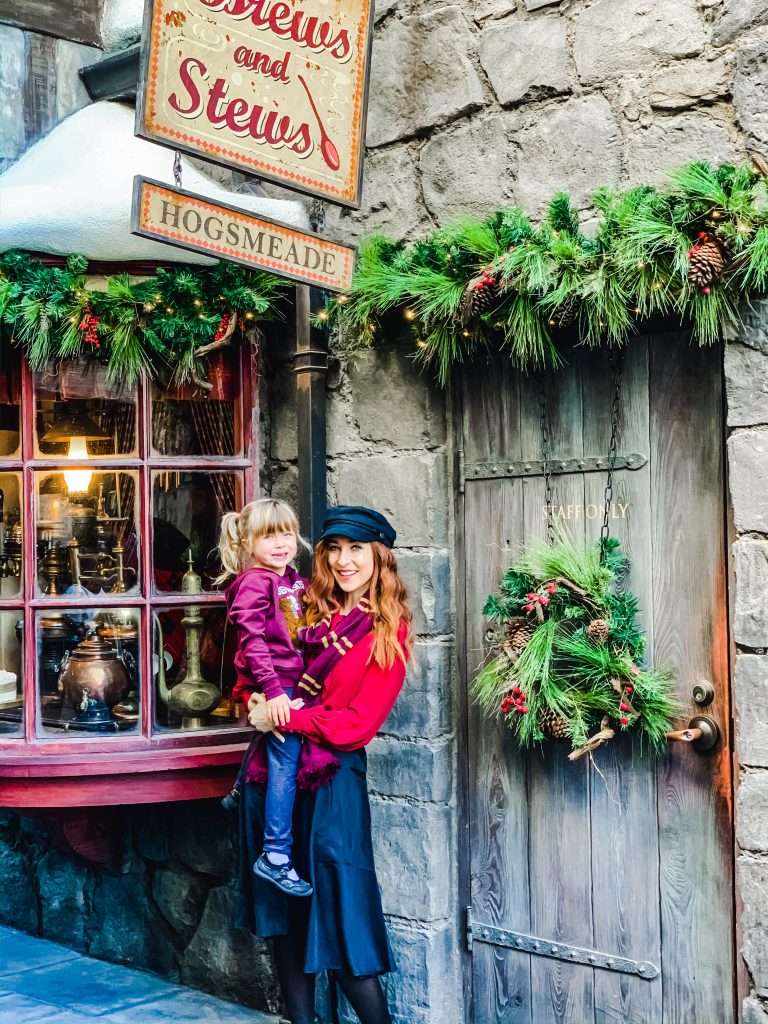 You can start planning your holiday trip to Universal Studios Hollywood here. 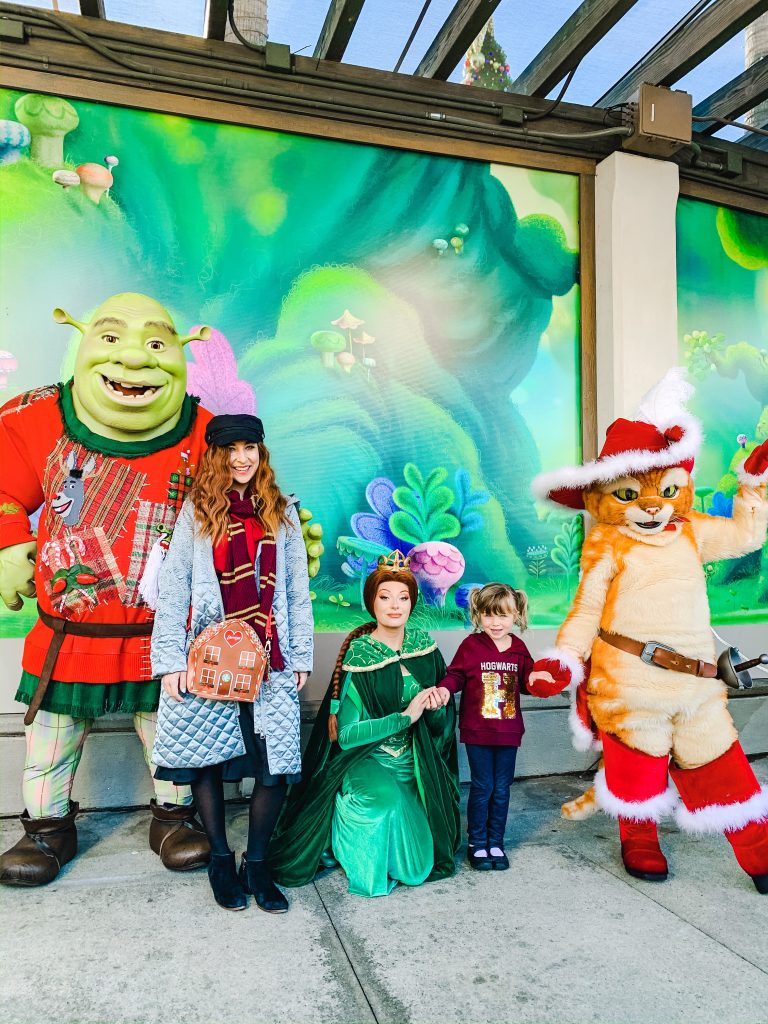