The Origin of My Sticky Bun Banana Bread

With the opening of Disneyland Shanghai having recently occurred, and the gorgeous pictures of the park flooding in, I wanted create something with an Asian flair. Since Disney parks around the world are known for their amazing treats (churros, Dole whips, The Grey Stuff, School Bread, the list can go on), I wanted to make something more on the decadent side (but still healthy and all natural).

When brainstorming, the first inspiration that came to mind were mooncakes. I have great childhood memories of having mooncakes with my family, as my aunt who is Taiwanese would always have some around the the Mid-Autumn Festival. Mooncakes are typically made for the Mid-Autumn Festival to celebrate lunar worship and moon watching. The filling is a red bean paste, which is fine, but the top crust was my favorite! It had this sweet, chewy, and slightly sticky glaze…and a sweet taste that wasn’t overpowering.

This was the base of my inspiration to make a yummy and sweet breakfast creation inspired by the Disneyland Shanghai opening. My recipe reminds me of a cross between the sticky mooncake crust, pull apart monkey bread, and cinnamon rolls. It is filling, yet light in taste and not overly sweet. Check out the steps to recreate my clean eating Sticky Bun Banana Bread. This recipe, is as always, clean, healthy, and Disney-inspired: 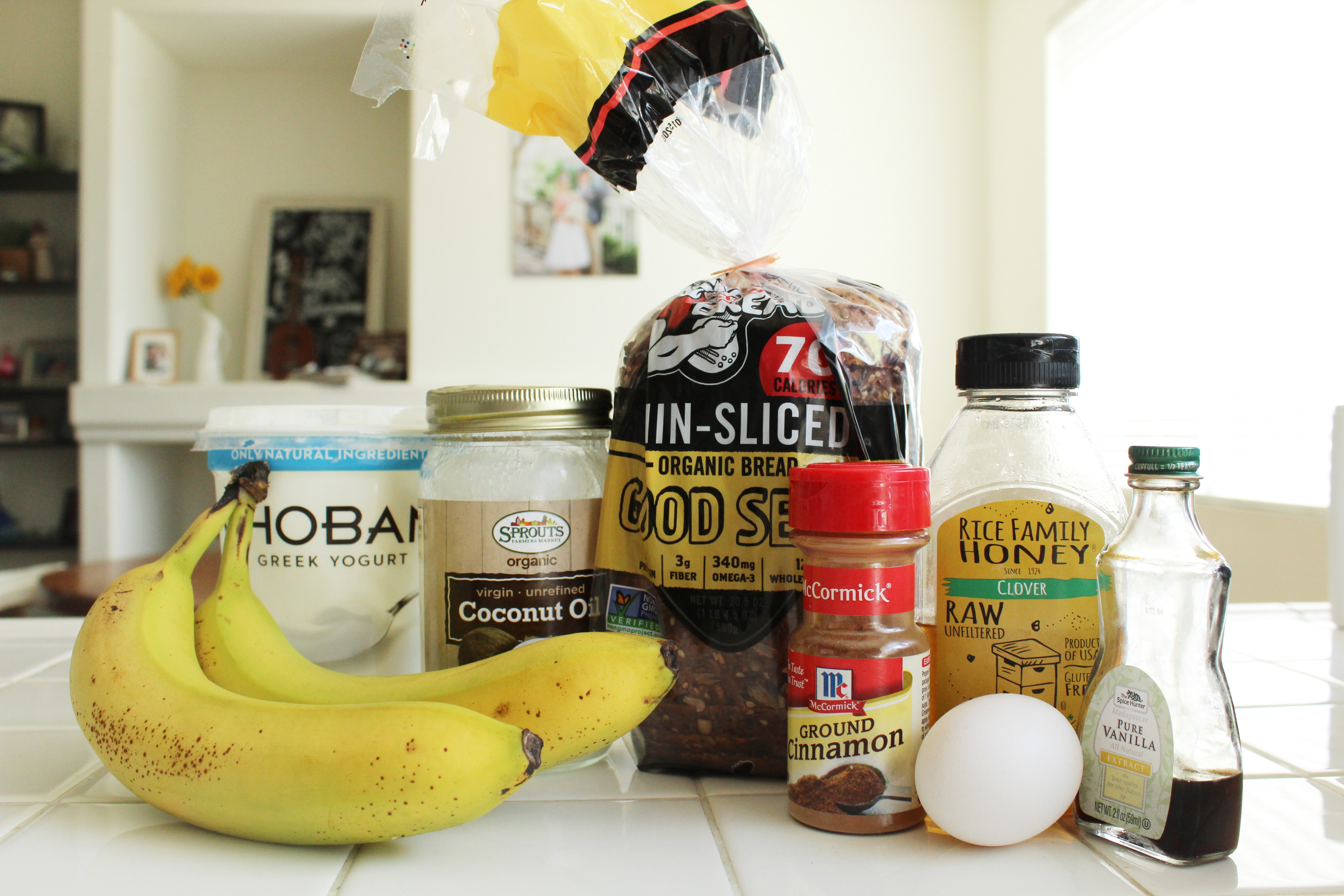 Since most of the ingredients are pantry staples, this is easy to make on a whim, as you only need the very basic fresh items like bread, eggs, and bananas on hand.

First, preheat your oven to 375 degrees Fahrenheit, and put your coconut oil in a small dish and heat in the microwave 15 seconds to melt. 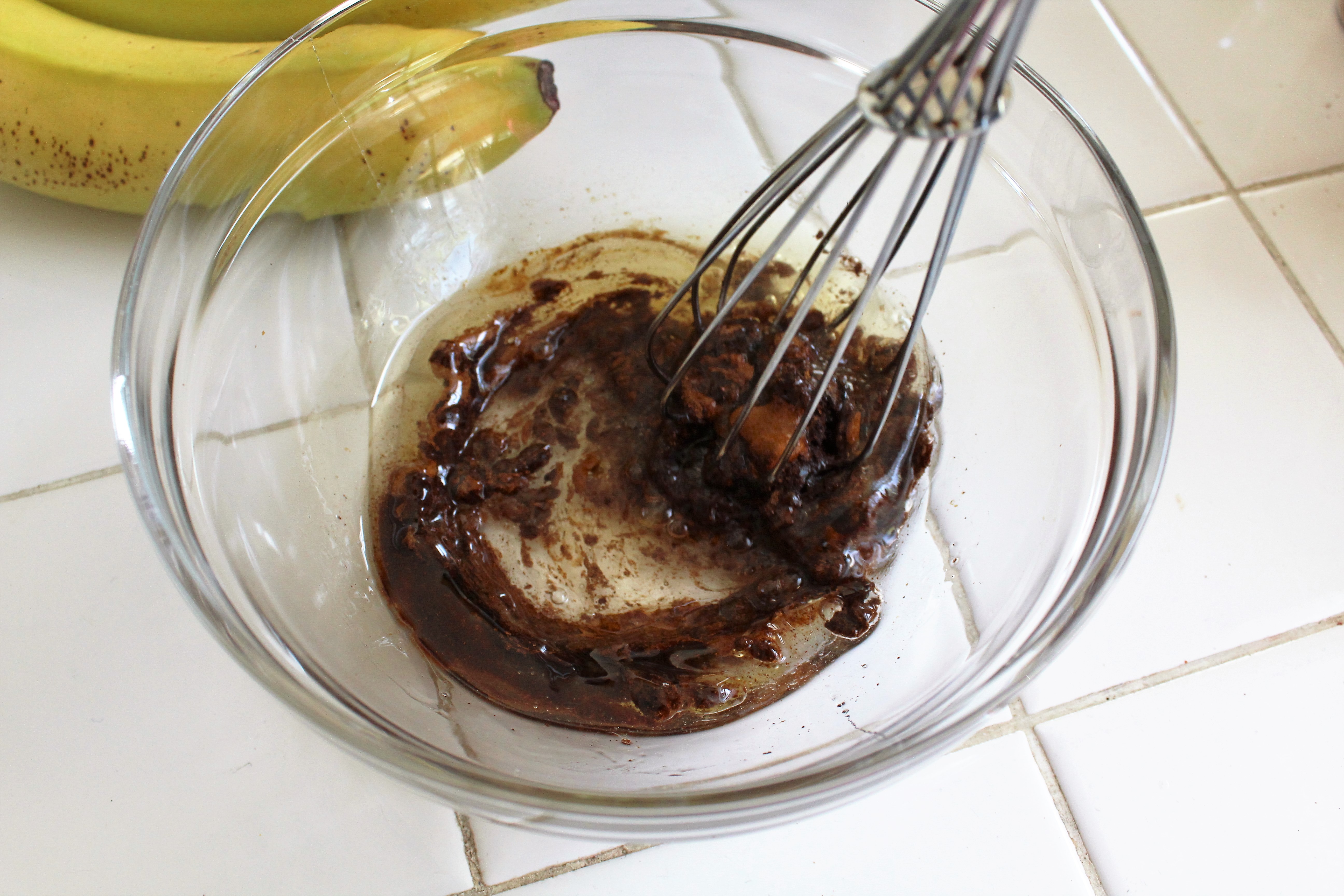 In a small bowl, whisk together your cinnamon, melted coconut oil, honey, vanilla extract, and egg white together.

You’ll want to make sure it’s mixed together very well, it should come out thick. 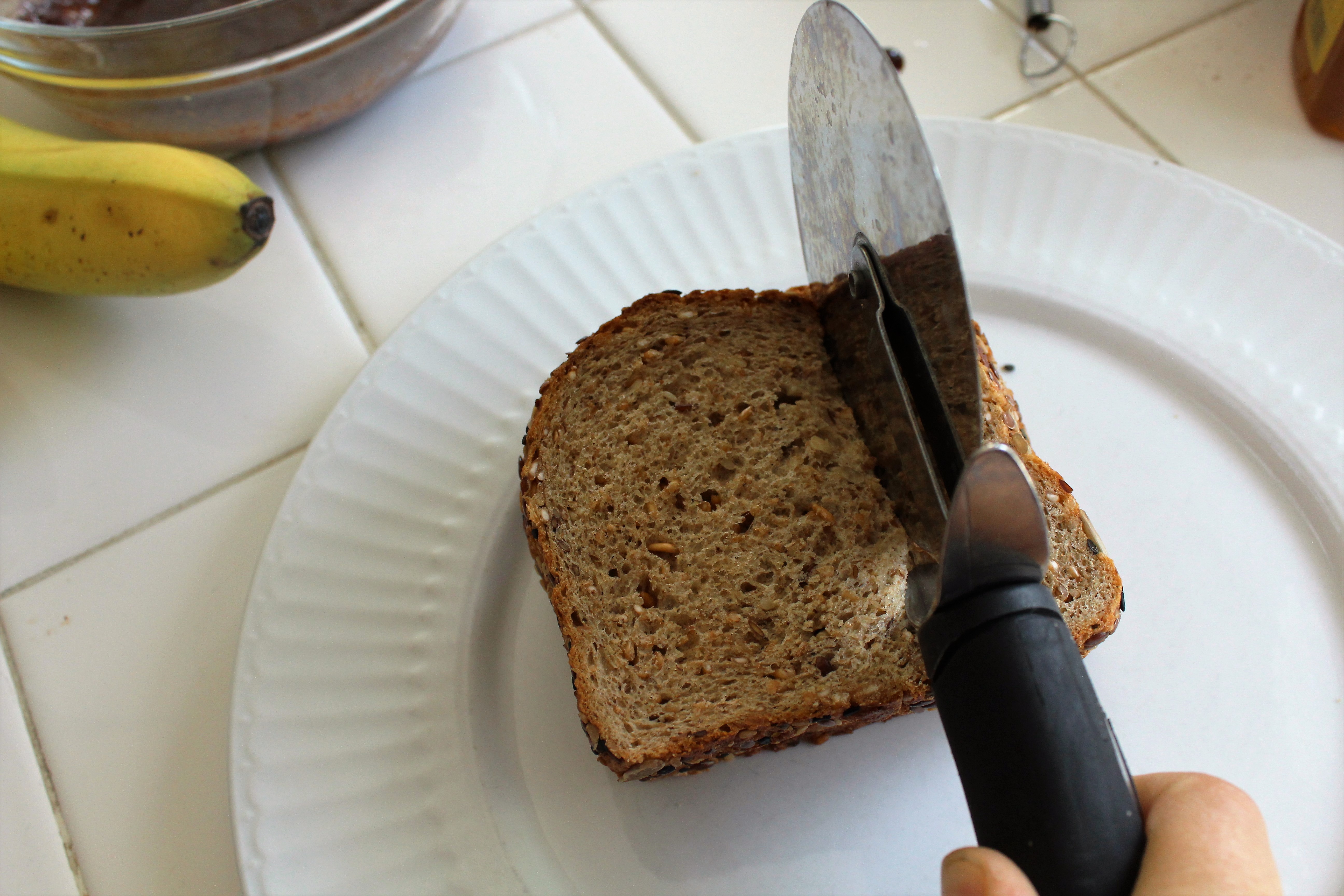 Next, cut each slice of bread into three strips. To make this go faster, I stacked three slices of bread together and cut them all at the same time. You can use a knife, or a pizza cutter like I did.

When you have all your bread sliced, go ahead and coat your loaf pan with non-stick spray or oil. 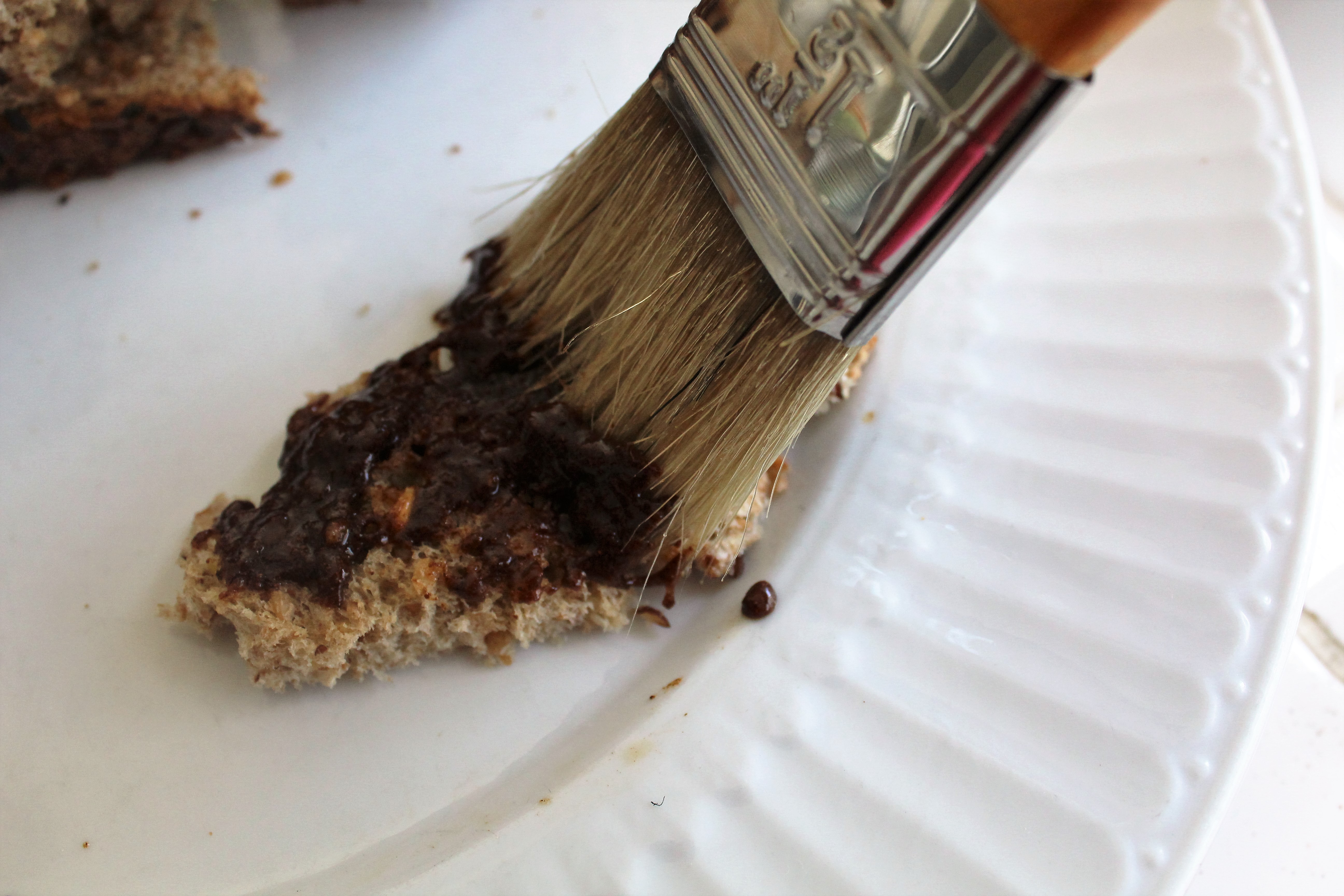 Now it’s time to coat each of your bread slices with the ooey-gooey cinnamon sauce you whisked. I used a BBQ brush to spread the sauce on top of each slice, but you can also use a knife or back of a spoon, whatever is easiest for you. Be sure to leave a little bit of glaze leftover in your mixing bowl to top the bread with.

After each piece of bread you glaze, add 1-2 banana slices on the bread, and fold in half and place in the pan. 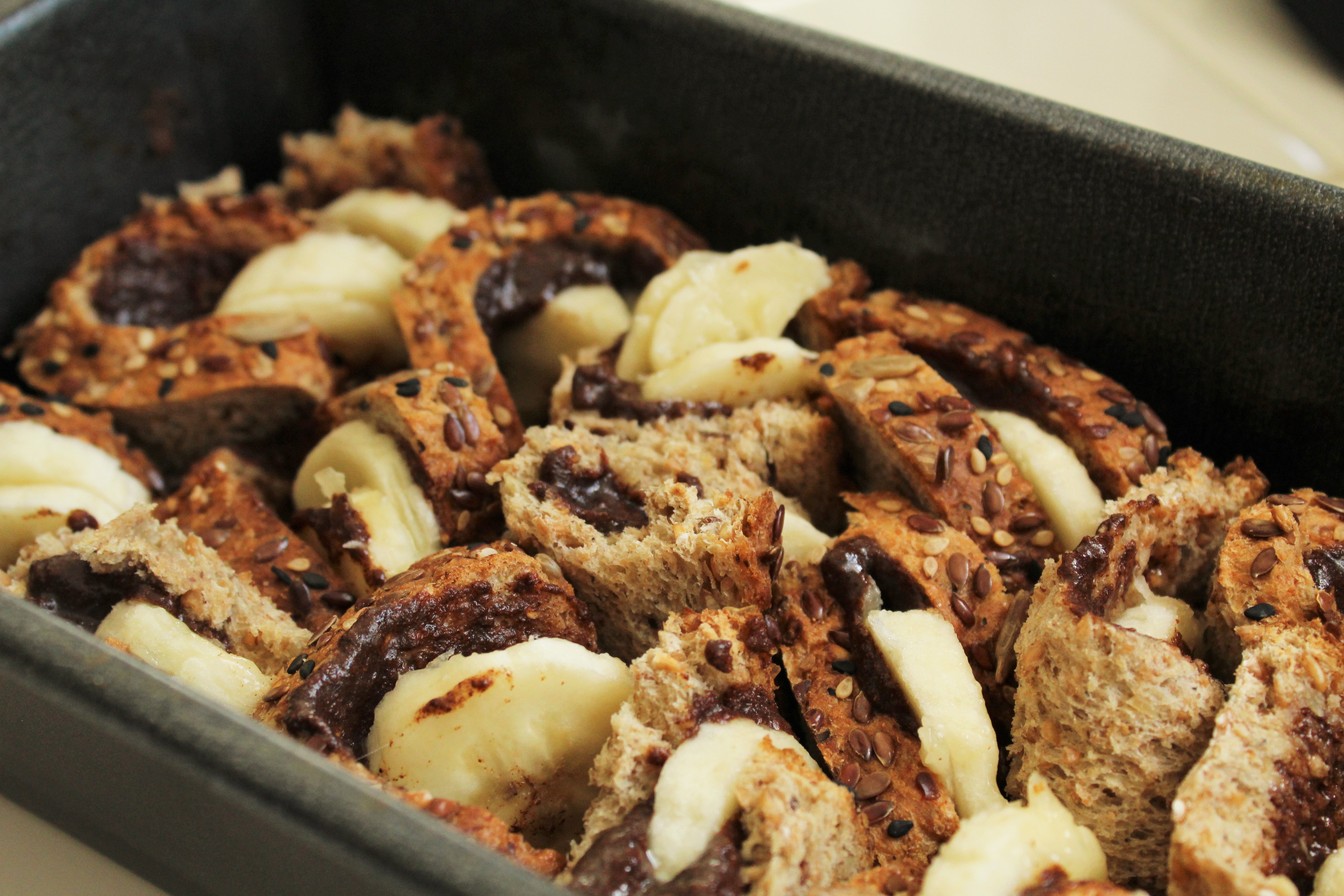 Continue to do this with each slice of bread. Pack them together very tightly, so that they all fit! 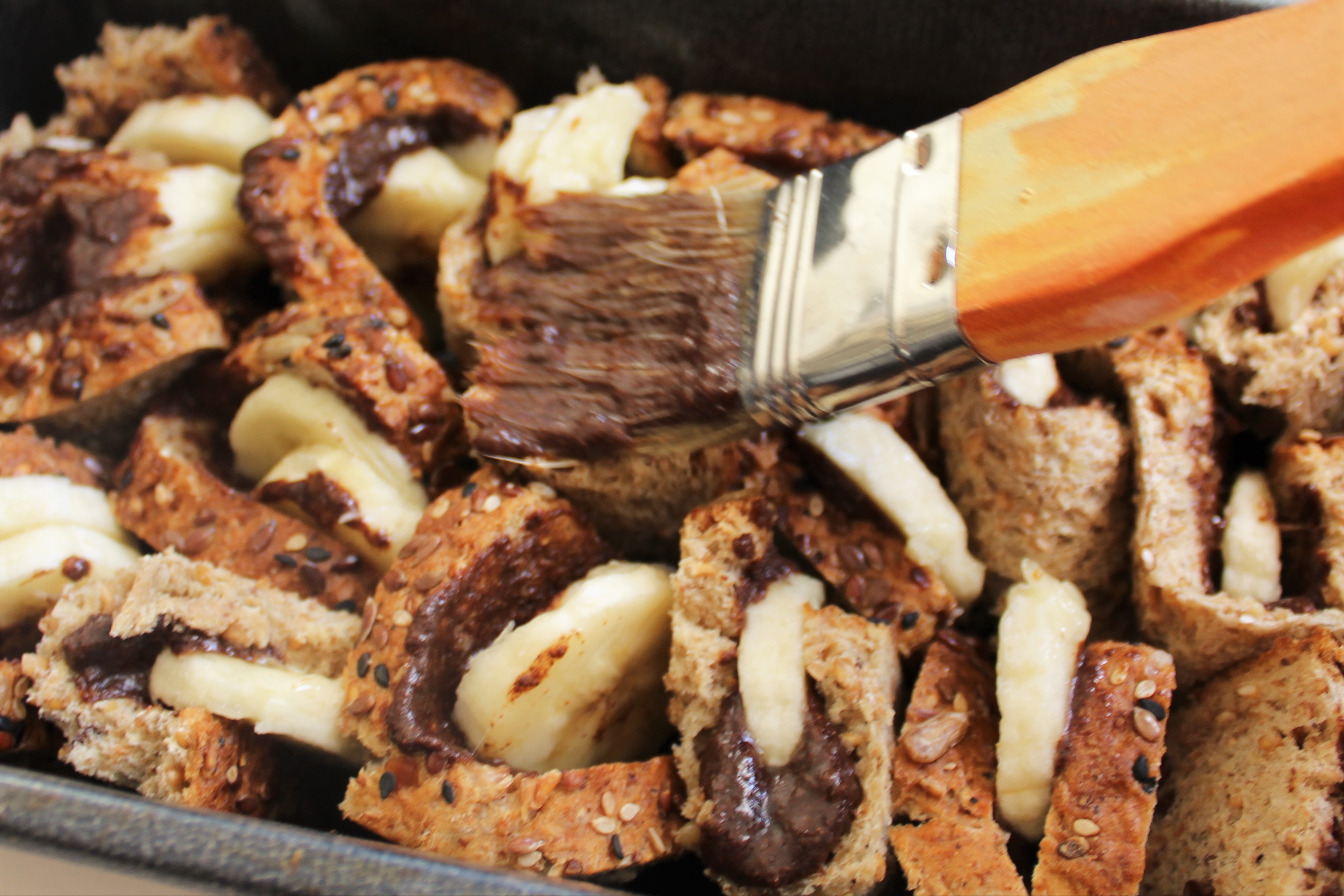 Using your glaze brush again, spread the remainder of your glaze on top of your bread until you’ve used it all up. Then place in oven to bake for 10 minutes. It will have just a slight hardening on top, but be gooey on the inside. 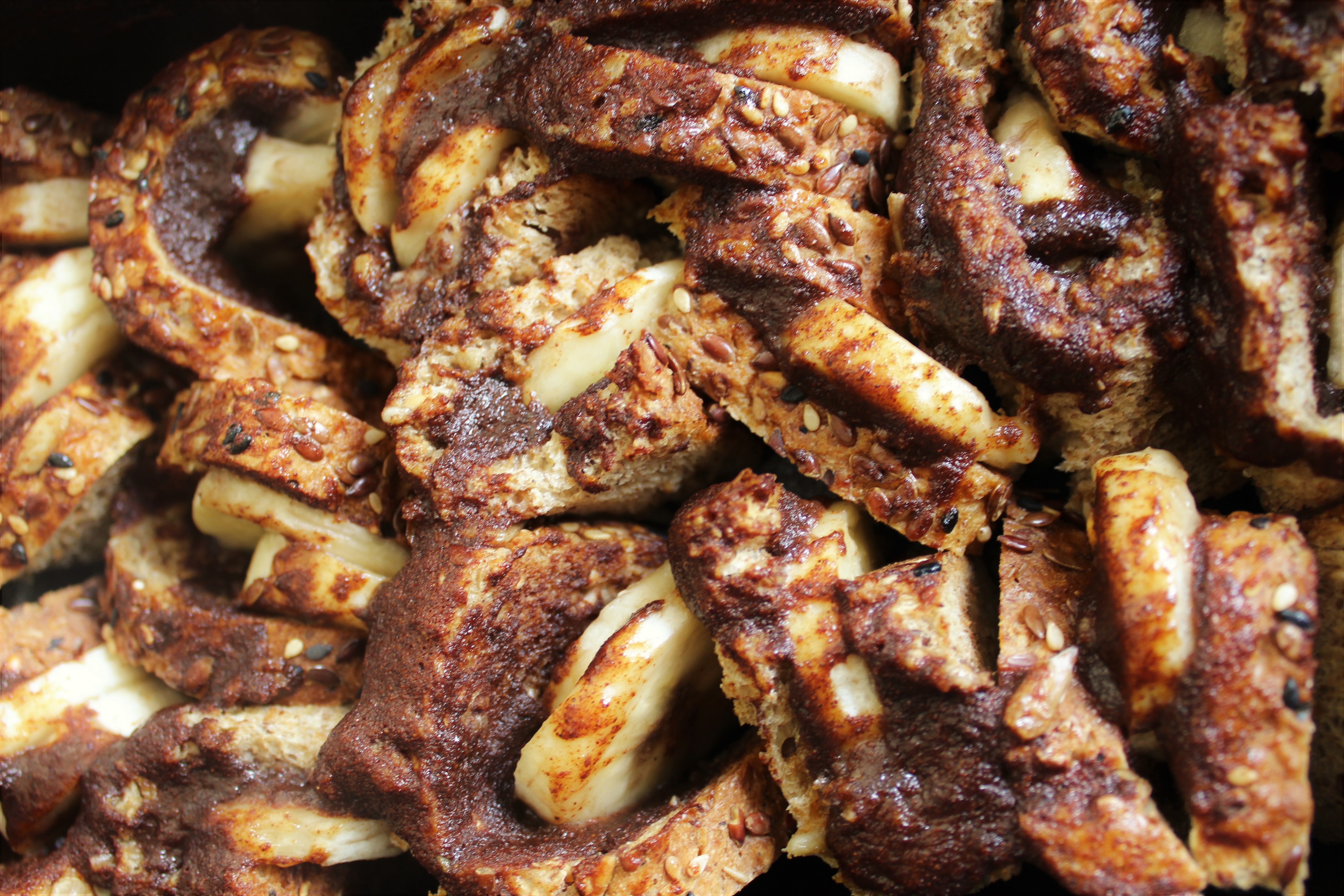 And you are all done making your Sticky Bun Banana Bread creation! Any leftovers you have, store covered or in a container in the fridge for up to 2 days (you can keep a little longer if you like, but bananas might brown a little). 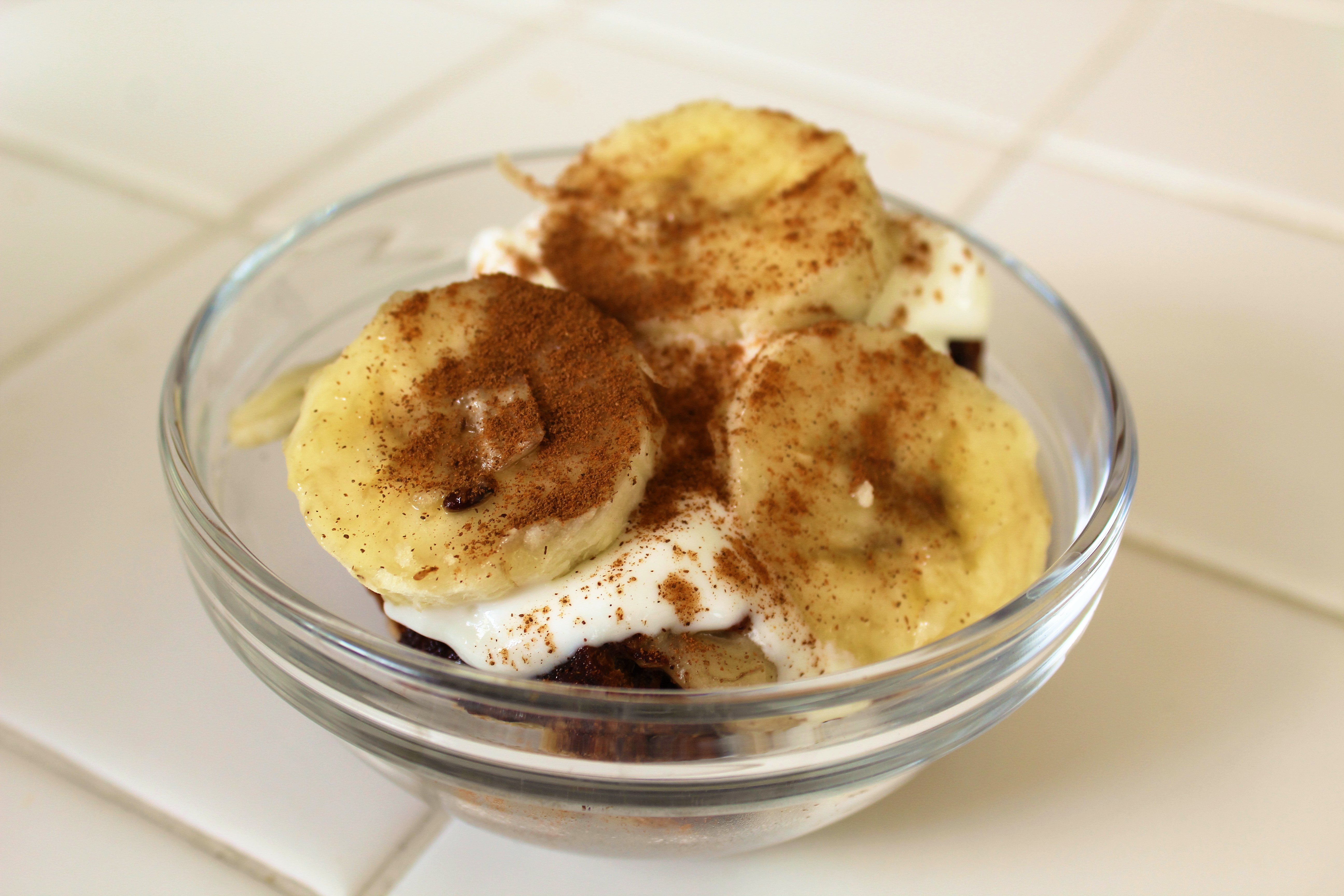 To serve, I put one serving of the bread in a bowl, and topped with a dollop of Chobani Greek yogurt for added protein, and to act as a placeholder for cinnamon roll frosting.

I then added some bananas and an extra smattering of cinnamon on top. The combination of gooey cinnamon glaze, chewy bread, sweet bananas, and the cold, creamy thick Greek yogurt was absolute perfect!

And there you have it! Some delicious, on the healthier side, sticky bun banana bread!