Ever since his debut as the title character in the 1941 film Dumbo, the baby elephant with the unsightly but magical ears has been a beloved character in Disney’s canon. Despite the film being made largely as an economical follow-up to the animation studio’s ambitious Fantasia (the 1941 Dumbo runs a little over an hour and contains a sparse amount of voice acting), the story and visuals have enchanted audiences for decades. Dumbo’s status as a Disney symbol was cemented further in 1955 when Disneyland opened the Dumbo the Flying Elephant attraction, which has since become a staple of several Disney Parks around the world. With this pedigree to the little elephant, it was a matter of time before Dumbo would see the big screen once again. And now, with the artistic vision of legendary director Tim Burton, Dumbo returns to soar to new heights in a magical reimagining of the classic story. 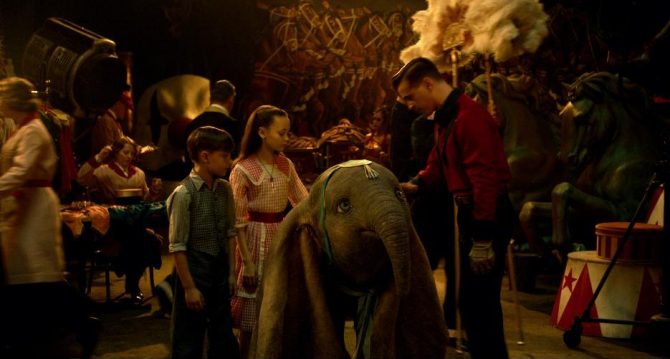 While the story of the original film remains largely unchanged, the remake expands upon it and opens it up to the human members of the baby elephant’s circus. Set in 1919, the failing Medici Brothers Circus (led by ringleader Max Medici, played by Danny DeVito) finds itself in possession of an elephant with a new baby with unusually large ears. When the elephant, first named Baby Jumbo, is introduced to jeers from the crowd (derisively naming him “Dumbo”), the baby’s mother angrily defends her child, accidentally causing a huge disaster, which leads to her being sold and separated from Dumbo. Milly and Joe, the children of former circus stunt rider Holt (played by Colin Farrell), discover that Dumbo has an incredible talent to lift himself off the ground using his large, powerful ears. With their help and their promise that Dumbo’s success will lead to him and his mother being reunited, Dumbo becomes an instant sensation in the circus. This catches the eye of V.A. Vandevere (played by another Burton alumnus, Michael Keaton), the charismatic entrepreneur and owner of the turn-of-the-century circus and amusement park Dreamland. Vandevere purchases the Medici Brothers Circus to add Dumbo to his act and to fly with his star acrobat Colette (played by Eva Green), but Dumbo’s newfound fame may draw him farther from his goal of reuniting with his mother. 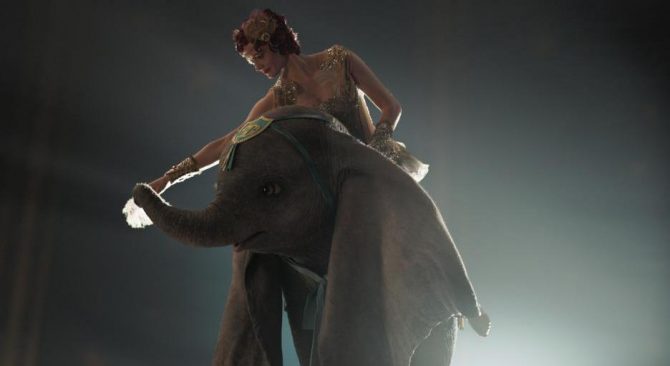 As has become Burton’s trademark, the film is packed with lovely, fantastical visuals. From the small-time, beige-tinted 1900s circus imagery to the Jules Verne-esque, Art Deco paradise of Dreamland, Dumbo introduces a world that only Burton could create. The sequences in which Dumbo takes flight are each wonderful and magical, displaying a skill that proves Tim Burton as a legendary director. Audiences in the screenings couldn’t help but cheer and applaud for every time the little elephant flew.

A great deal of selling the magic of the story comes from the film’s composer, long-time Burton collaborator Danny Elfman. Elfman appears right in his element, blending whimsical circus calliope music seamlessly into Dumbo’s majestic, ethereal theme, which harkens back to a similar score from Elfman and Burton in Edward Scissorhands. The impossible visuals of an elephant flying with relative ease are made real due in large part to a score that draws the audience into the fantastical, magical world of the film.

The film pays tribute to the original in a number of ways, including a cameo from Timothy Q. Mouse (who, like the other animals in the film, doesn’t speak), a beautiful recreation of the famous “Baby Mine” musical sequence, and a visually stunning sequence of “Pink Elephants on Parade,” presented as another magical circus act in Dreamland, as seen through Dumbo’s imagination. 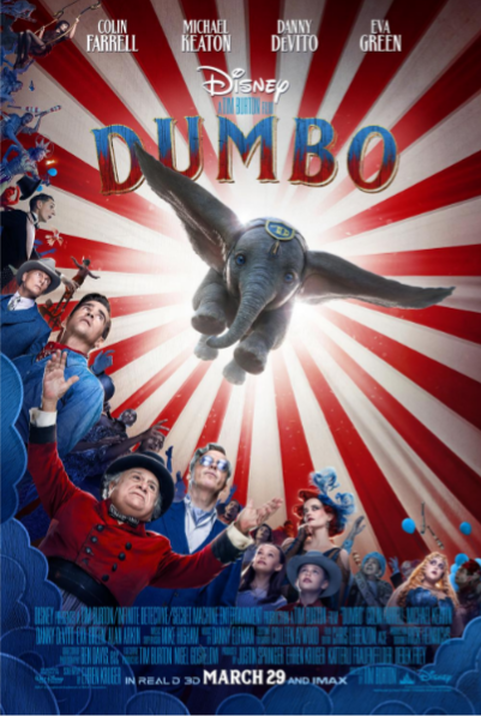 If you’re wondering what age would be good to bring to see the movie, my 4-year-old loved it and sat through the whole thing! The film is full of emotional moments, and the ones that hit the hardest come from Dumbo himself. Fans of the original will find plenty to fall in love with, and Dumbo will no doubt be a worthy leader of the string of reimaginings coming in 2019, as the summer will bring audiences the stories of Aladdin and The Lion King. To read interviews with the cast and crew of Tim Burton’s Dumbo, click here!