WandaVision is Unlike Anything in the MCU

On January 15th, the much lauded Marvel Cinematic Universe expands to the streaming universe on Disney+. As Marvel Studios President Kevin Feige explained, it only made sense that the MCU’s first Disney+ original series was a story that could ONLY be told in the medium of television. The story of WandaVision is entirely unlike anything that’s been seen before, in the MCU, on Disney+, or anywhere.

As fans of the MCU, we’ve seen the story of the super powered Wanda Maximoff and the artificial life form Vision play out on the sidelines. From misfits to lovers to a tragic separation, Wanda and Vision have been fan favorites, but without their own story, until now. In WandaVision, however, they are not as we remember them.

Wanda and Vision now live in the suburbs, trying their best to blend in as a normal family, despite their super powered lifestyles putting a cramp in their plans. But through it all, they seem like the perfect TV family. Because now they are. In WandaVision, the two former Avengers are stars in their own sitcom lives, and in each episode, their reality changes to the next era of television, shifting from 1950s “Lucy and Desi” to 1970s “Brady Bunch” all the way to the present. But what is the reason behind their new reality? And oh yeah, didn’t Vision die last time we saw him? 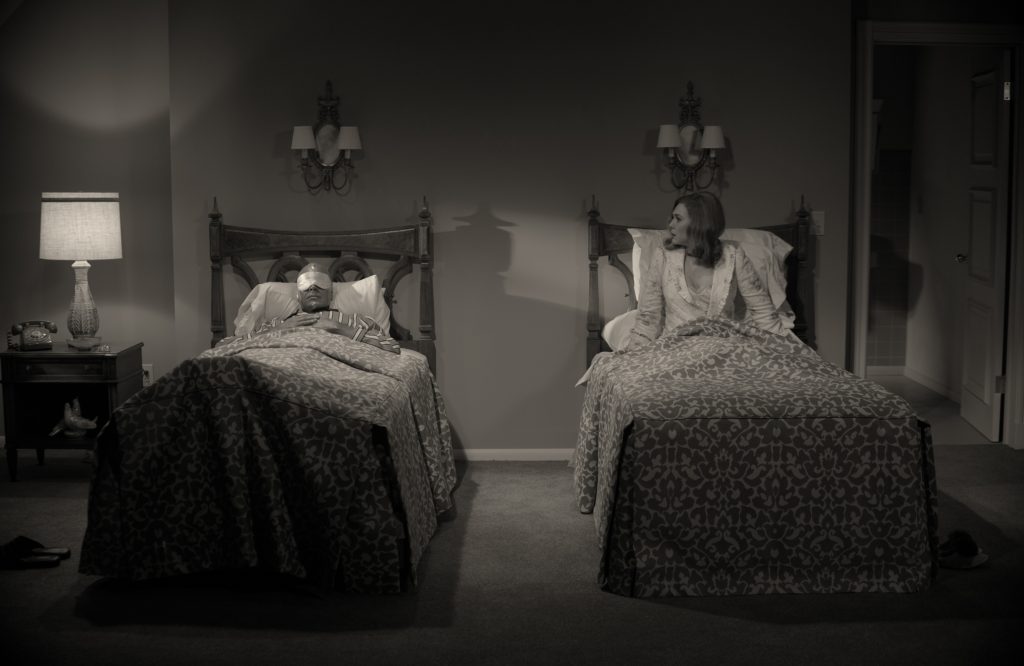 The mysteries of WandaVision are deep within the fibers of the premise, and within the first three episodes (which were screened for press), clues are tantalizingly scarce. The first episode, for instance, nearly goes the entire duration without seeming like anything other than a 1950s sitcom featuring two familiar characters. There’s no supervillain of the week, like in Marvel Television’s previous ventures like Agents of S.H.E.I.L.D. and no geopolitical intrigue as might be expected from the MCU’s next Disney+ offering Falcon and the Winter Soldier. Instead WandaVision is entirely its own story, a story that could only be told in a weekly, serialized format, and could only be told with these two characters.

Elizabeth Olsen is once again Wanda Maximoff, the Sokovian enemy-turned-Avenger who, as a result of Hydra experiments, has untold (and largely unknown) superpowers. Within the first episodes, which cover a lot of “golden era” television genres in the vein of I Love Lucy and Bewitched, Olsen vibrantly channels Mary Tyler Moore and Elizabeth Montgomery. As Olsen said, with some of the physical comedy (especially in the first episode, filmed before an actual live audience), she quickly fell into some Lucille Ball inspiration. Olsen’s mastery is shown as the perfect veneer of television occasionally, and briefly, fades to show the possibly sinister nature of her new reality. In these moments, we see her shift from a bubbly housewife to the hardened superhero she has become, though we don’t get a sense of how much more information she was over us, the audience. 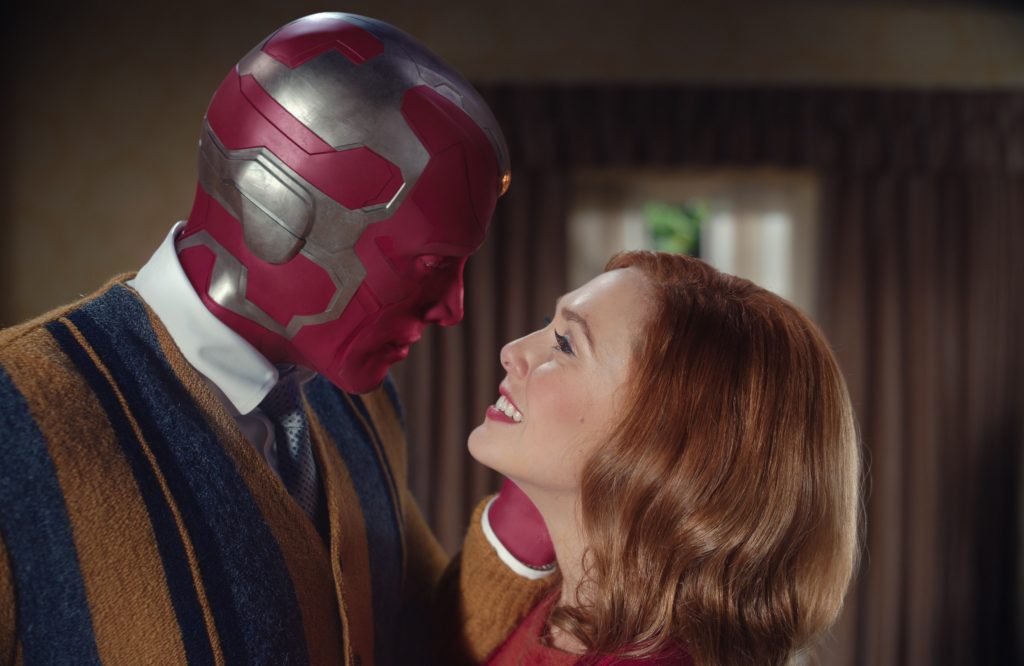 Playing against her is Vision, played again by Paul Bettany. While previous appearances had Bettany portraying Vision as more stoic, being a literal walking computer, he gets to stretch Vision into areas the character has yet to explore, particularly comedy. Although Bettany is no stranger to comedic roles, he said it did take some getting used to in order to justify it with Vision’s character. He ultimately came to the understanding that Vision, as an amalgam of Tony Stark’s AI J.A.R.V.I.S., the deranged robot Ultron, and the mysterious Mind Infinity Stone, Vision is used to change. Therefore, being transplanted into a black-and-white sitcom was easily adaptable, Bettany saying he adopted a little bit Dick Van Dyke, a little bit Hugh Laurie, and Vision could seem like the perfect husband.

Kathryn Hahn and Teyonah Parris round out bits of the supporting cast, although not much could be gathered from their characters nor their importance to the overall story. Parris, for instance, despite being credited as Monica Rambeau (previously seen as a child in 2019’s Captain Marvel), goes by a different name in her first appearances on the show. Hahn, meanwhile, is just perfect as a nosey neighbor archetype, but with several mysteries following her as well.

The show’s premise is a fantastic exploration and love letter to the changing medium of television, but with a superhero overlay, making WandaVision the perfect introduction for the MCU on Disney+. However, as the series continues, it may not be the perfect life for Wanda and Vision. WandaVision starts streaming on Disney+ on Friday, January 15, 2021.

By Jessica
7
marvel wandavision reviewwandavisionwandavision review
Godmothered is a New Holiday Classic – Now Streaming on Disney+!
Creators and Cast of Raya and the Last Dragon Talk About the Importance of Representation