Adding Disney Magic in Children’s Hospitals Across the Country

The last thing I did at D23 Expo this year was is one of the things that’s been on my mind the most. I went to the Disney Team of Heroes activation on the showroom floor. To be honest, I didn’t really know what it was but it had a massive line everyday and on the last day right before the Expo closed it had a short(ish) line so decided to see what it was all about.

Let me tell you, I did not expect to see what I saw. I was truly touched by this initiative called Disney Team of Heroes. Disney has teamed up with Texas Children’s Hospital to add Disney magic to the hospital. But best yet, we learned that Disney will also be expanding these touches of pixie dust to 40 other children’s hospitals in the United States over the next four years. So now let’s explore what I saw at D23 Expo – here’s a look at how we are going to be seeing Disney magic in children’s hospitals:

When children check into Texas Children’s Hospitals (and soon to be more, which hospitals it’s expanding to is TBA), children can select a Disney, Marvel or Star Wars character-inspired hospital gown: 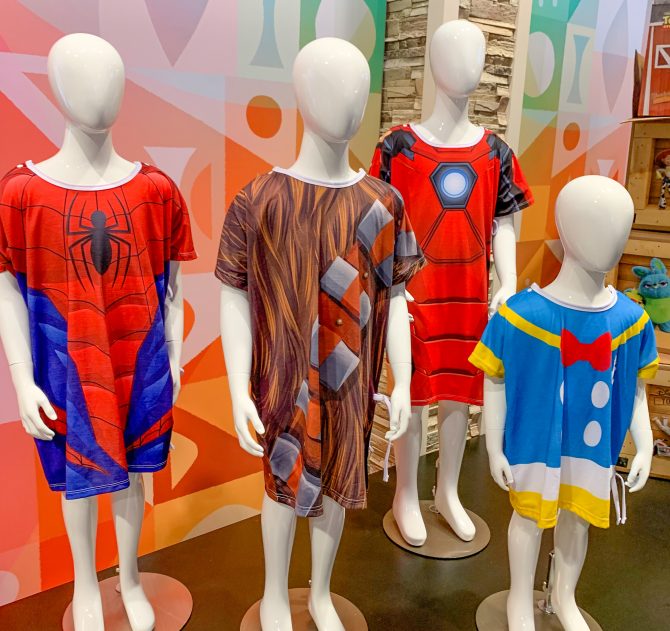 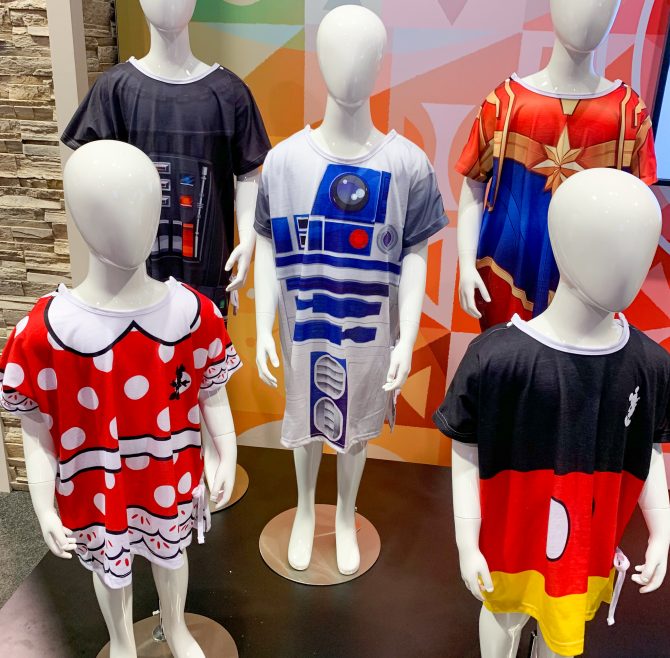 Once they check-in, they will go to a waiting room that will have an interactive art piece, with art by Joey Chou. You press the character on the artpiece to inspire the experience you will be going on in the waiting room. Near the art piece, you will then see a large window that “looks out into another world”. Meaning, there’s something that looks like a window that’s actually a digital screen where kids can have interactive play in a Disney world. The one we saw an example of was seeing the sites and interacting with characters of Zootopia. 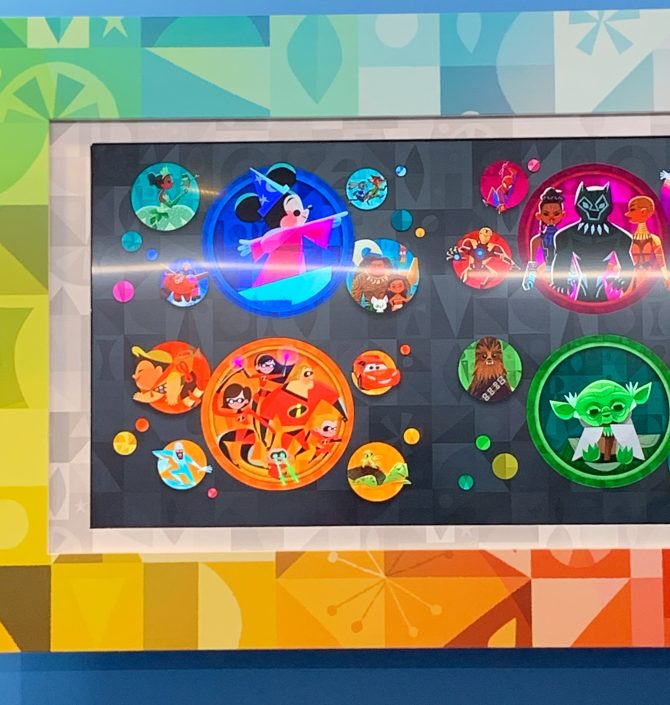 On your way to the patient rooms, you will pass by a beautiful mural also by Joey Chou. In the rooms themselves, patients will have special Disney toys and books awaiting them. The staff and caregivers will also have Disney magic, getting to select a Disney, Marvel or Star Wars badge. Patients will not only get the character-themed hospital gown, but they will get to choose a character wristband, to help caregivers instantly know their favorite Disney, Marvel or Star Wars character for a more personalized conversation. 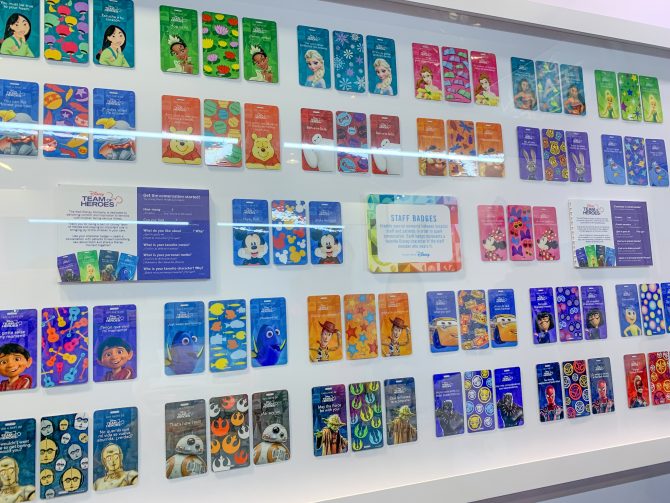 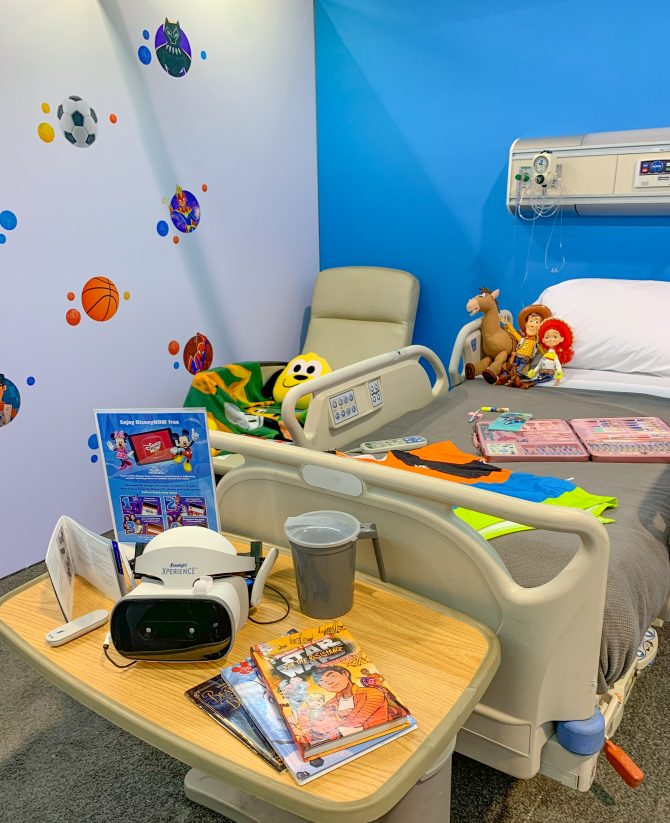 Patients will also periodically receive care packages also featuring Joey Chou art, including the wall decals you can see in the photo above to decorate hospital rooms! The care packages children will receive will be themed to the character on their wristband they chose when checking into the hospital. At D23 Expo, it warmed my heart that the lines were so long to visit this booth, since at the end of the tour we all made these care packages to send to patients! I can only imagine how many were made over the course of D23 Expo weekend. 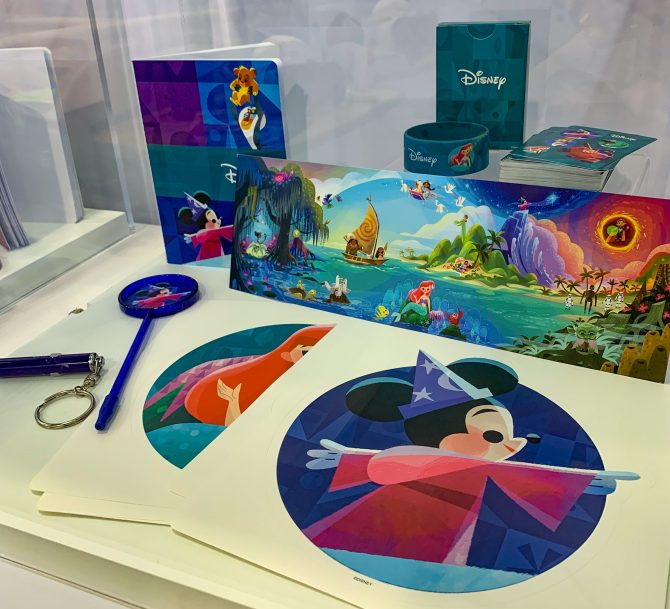 One aspect of the tour that really fascinated me were models of accessibility-friendly play areas for patients that were designed by Disney Imagineers. We saw models for Moana, Black Panther, and Star Wars. Currently in development is an Avengers and Finding Nemo play area. 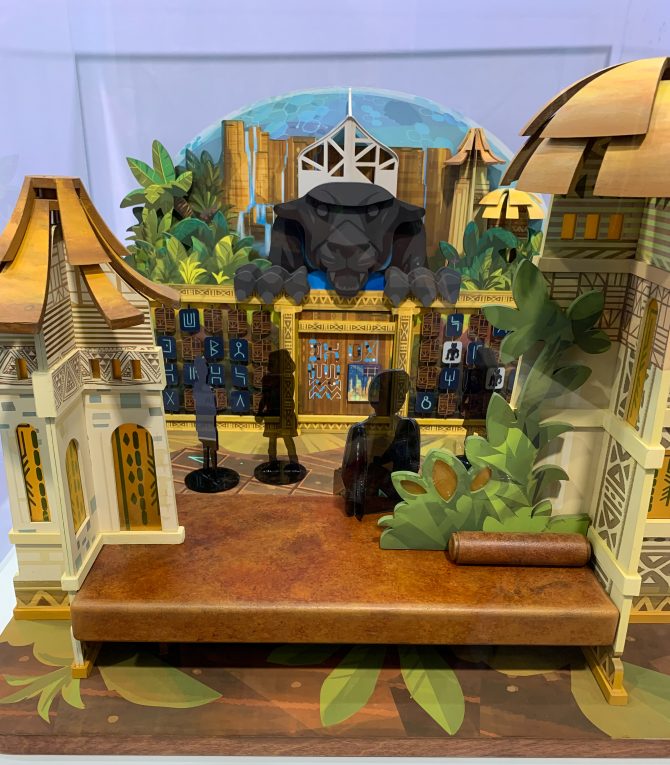 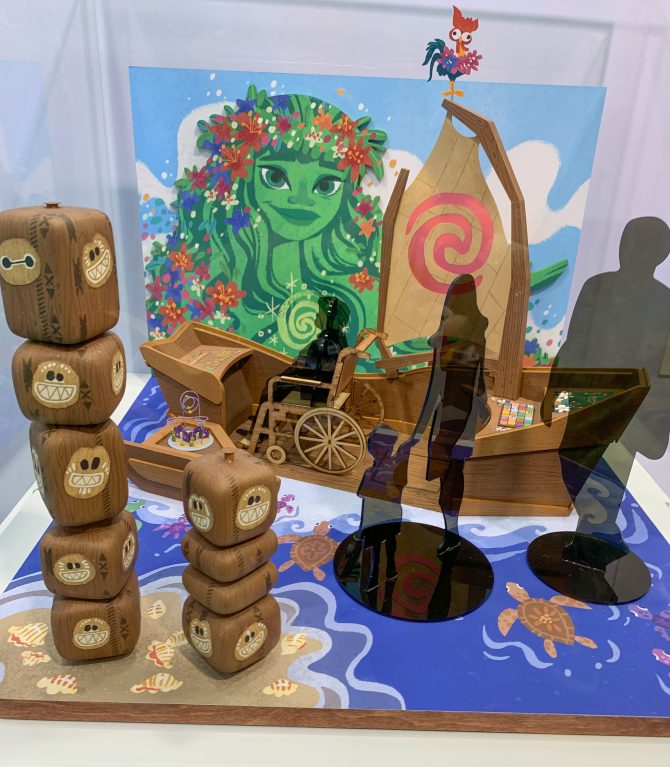 Another piece of technology for the Disney magic in children’s hospitals is the Disney WOW app that patient’s parents can access on their phones. The app is what patients use at the beginning of their stay to select their hospital gown and wristband, and then can be used throughout the stay to play interactive games, and listen to Disney stories. Stay tuned for more information on what hospitals the Disney Team of Heroes initiatives will be expanding to. At D23 Expo, we were told the children’s hospitals will be selected based on their need for enhancing their offerings.