Hello! I’m Melanie Gable and I’m guest writing for The Healthy Mouse to share my experience attending the press junket for “A Wrinkle in Time,” the latest film offering Interviews with the Cast and Creators of Disney’s A Wrinkle in TimeThe Walt Disney Studios. I’m so grateful to Jessica McDonald for inviting me to attend the press junket in her place! It was a fantastic, star-studded experience and the event got me even more pumped to share my thoughts about the film with you all.

On February 24th my husband and I drove from Orange County to The Walt Disney Studios lot in Burbank to attend a reception and press screening of “A Wrinkle in Time.” (Being huge Disney fans, this was a fantastic way to celebrate the 10th anniversary of our first date, for sure!) The next morning I was invited back to Los Angeles to attend the film’s press junket at the hip and gorgeous W Hotel in Hollywood. The invited group was made up of writers for newspapers, magazines, websites, and blogs, so I felt incredibly excited to be in attendance, as I wouldn’t have normally had the opportunity to attend such an important Disney event. 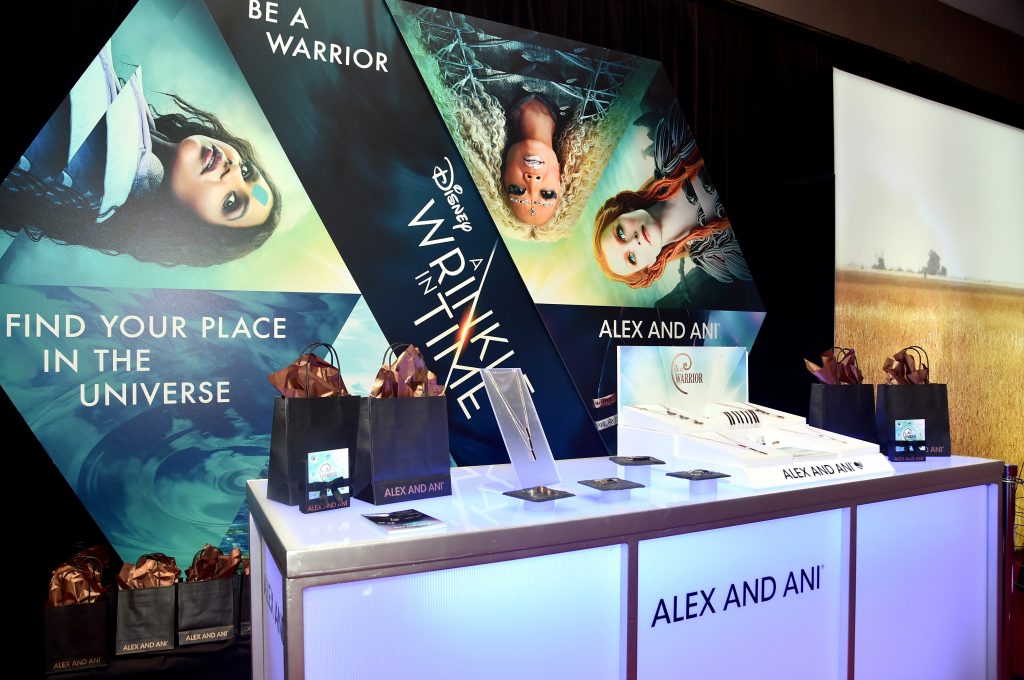 HOLLYWOOD, CA – FEBRUARY 25: A view of the atmosphere during the press conference for Disneys ‘A Wrinkle in Time’ in Hollywood, CA on March 25, 2018 (Photo by Alberto E. Rodriguez/Getty Images for Disney)

After check-in (and complimentary lattes – yaasss!) we had access to some exclusive treats, including sneak peeks of upcoming movie tie-in products with Alex + Ani and Elizabeth Arden, themed photo opportunities, and up close viewing of three of the gorgeous costumes from the movie, designed by Academy Award nominee Paco Delgado, worn by Reese Witherspoon, Mindy Kaling, and Oprah Winfrey. Disney went all out with our swag bags, which included a “Wrinkle in Time” t-shirt, a download code for the film’s soundtrack, Elizabeth Arden makeup, and a sterling silver Alex + Ani bracelet adorned with the quote “Find Your Place in the Universe.” I’m a huge Alex +Ani fan, so I was particularly thrilled about being gifted such a beautiful piece of jewelry. 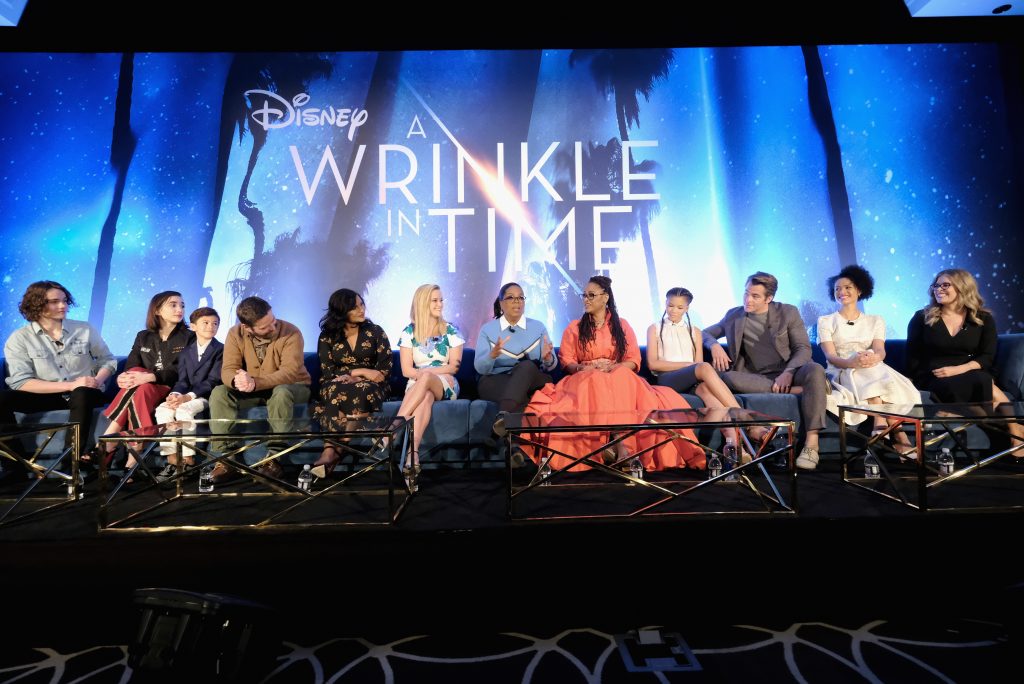 Once we were all thoroughly caffeinated and the group interview began, I was delighted to see that the entire lead cast of the movie was in attendance, as well as director Ava DuVernay and screenwriter Jennifer Lee. The moderator was fun and energetic, and I appreciated that she asked every artist on the stage a unique question, since Q&A sessions or talkbacks often end up being dominated by just a few people.
DuVernay was clear, both in her introduction before the film screening and at the junket, that “A Wrinkle in Time” was a labor of love for her, and that it was made to capture the imaginations of young people, and the young at heart. Regarding preparing to tell the story and helm the movie, DuVernay said, “I have to ask myself, do I still have a heart, first of all? And is there an inner child in me? Did I tap into the 11-year-old, the 12-year-old, the 13-year-old in me, and find that light I used to have, that dreamer? And so I got to do that for two years. I got to really get in touch with all that I thought I would be when I was young and really tap into that and try to create some magic with this great group of people.”
First published in 1962, Madeleine L’Engle’s novel “A Wrinkle in Time,” as well as the other books in the quintet, are special to multiple generations of fans, who continue to be enthralled by the adventures of Meg Murry, a flawed, awkward tween heroine who learns to trust and love herself on a quest through time and space to find her physicist father. Screenwriter Lee (“Frozen,” “Wreck-It Ralph”) was chosen to adapt the novel, and she had the difficult task of staying true to the book’s themes and heart of the story while updating the material for modern audiences. “There is a timeless quality to the themes she’s dealing with,” said Lee. “We had a lot of conversations about what we were inspired by and then what that meant to us growing up and to children now and to the world now.”
It was clear that every actor jumped at the opportunity to work with DuVernay, and relished the experience. The atmosphere on set was described as warm, collaborative, respectful and magical, largely due to DuVernay’s leadership and the cast and crew she chose to surround her. 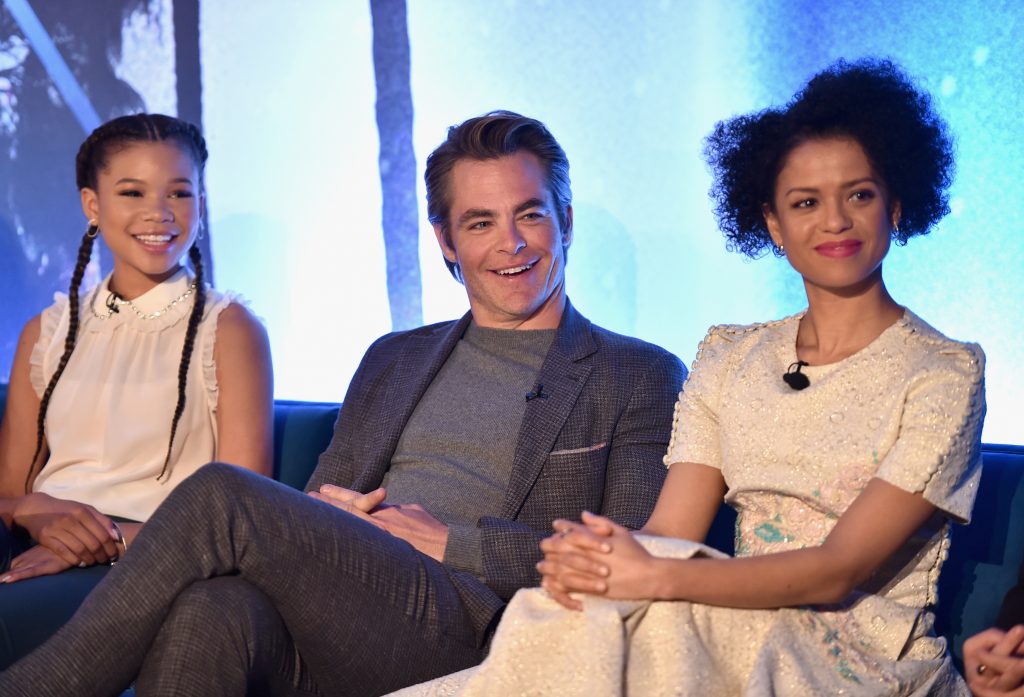 Chris Pine and Gugu Mbatha-Raw, who play Meg’s father and mother, both physicists, enjoyed exploring the scientific aspects of their roles and the film, especially their conversations with astrophysicist Stephon Alexander, author of “The Jazz of Physics.” What struck Mbatha-Raw most about the partnership between her character and Pine’s was that it was not only a romantic connection that drew them to each other, but also their shared passions. “Even though Dr. Kate and Alex Murry are obviously a love match, they’re also intellectual equals,” she stated. Pine spoke about the push and pull between his character’s need for recognition and validation and the disconnect that happens when the scales begin to tip further toward ambition than with connecting with his family. This disconnect is what causes his long-term disappearance, ultimately leading to his daughter Meg’s quest to find him, no matter what it takes. 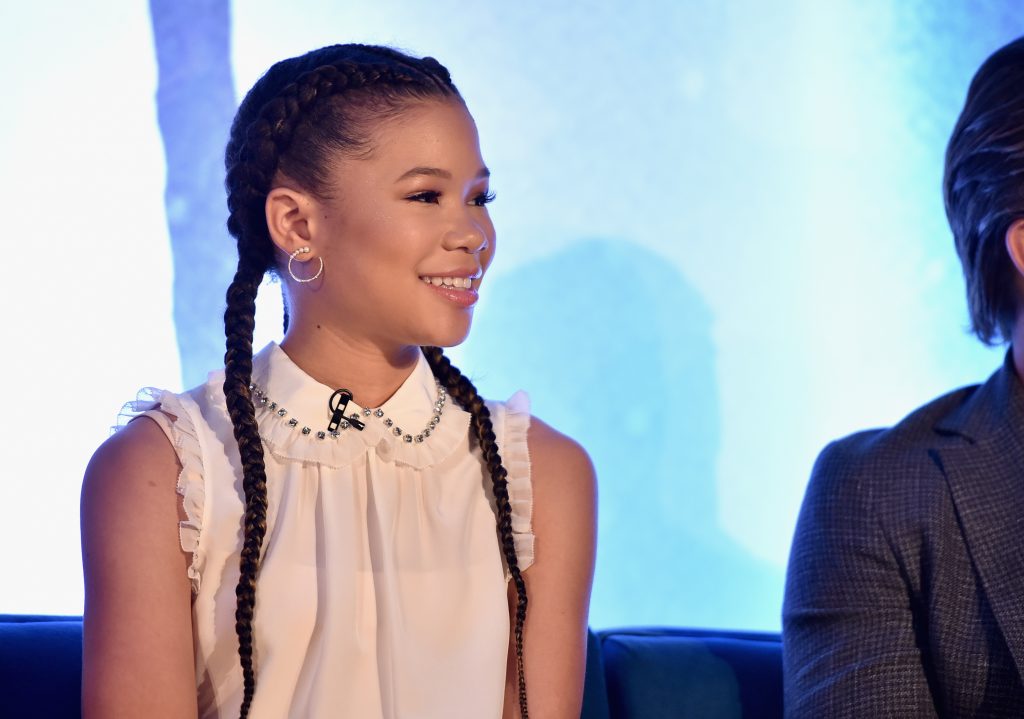 Storm Reid, the young actress who plays Meg, the heart and soul of the story, shared her excitement (and a bit of nervousness) at being on the precipice of releasing her first starring role into the world. “I feel like this is our baby, and this is our thing that we created and we love so much,” Reid gushed about the film. “We’re giving it to people for them to criticize it, for them to either like it or love it or not like it at all. So that’s a little bit nerve-wracking, but I feel like we did a good job and I’m really proud of us, so I’m really happy and it’s a blessing.” (She’s absolutely adorable.) 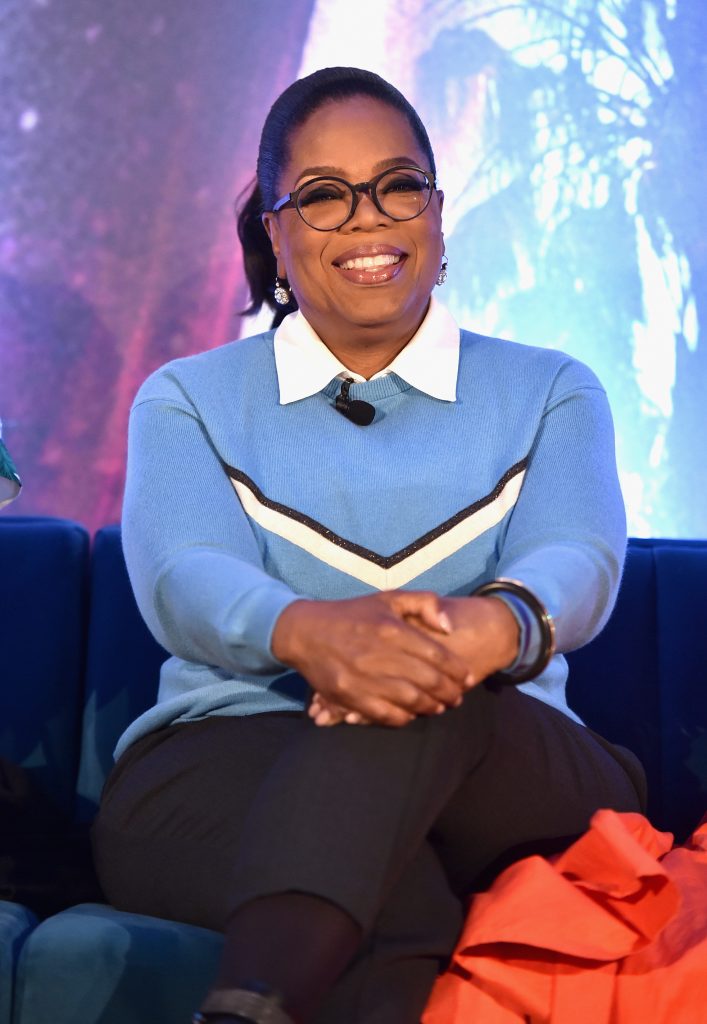 The three celestial beings who guide Meg on her interplanetary journey, Mrs. Whatsit, Mrs. Who, and Mrs. Which, are played by Reese Witherspoon, Mindy Kaling and Oprah Winfrey, all of whom spoke of their excitement and honor at being chosen by DuVernay. Witherspoon, on receiving the call from her agent that DuVernay wanted to cast her in the film, told us that she immediately said, “Yes! Great, when do I show up?” Kaling also expressed her gratitude at being chosen to play her role. “It feels absolutely incredible…I can’t believe I was selected to do this.” She described being at an event for Malala Yousafzai, and that she, DuVernay and Yousafzai were the only women of color in attendance. After having a great conversation with DuVernay, the sitcom actress said she thought, “‘Our genres are so different, we’ll never cross paths,’ and then this happened. So I feel so blessed to be a part of it.”
The sentiments were echoed by the formidable Oprah Winfrey (practically a celestial being in her own right), who raved about DuVernay. Upon hearing that her friend would be filming in New Zealand, Winfrey said to her, “I’m going. I’m going. I’m just gonna go…I’m just gonna go hang out with you for however long it takes, I’m gonna block it on my schedule, I’m gonna be there, I’m gonna watch you shoot and say ‘action.’” DuVernay, who had been reluctant to ask Winfrey to act in the film because of their friendship, then passed the script on to her, and Winfrey happily took the role of Mrs. Which, the sage leader of the three beings, and the one who provides light in the darkness when Meg needs it most. 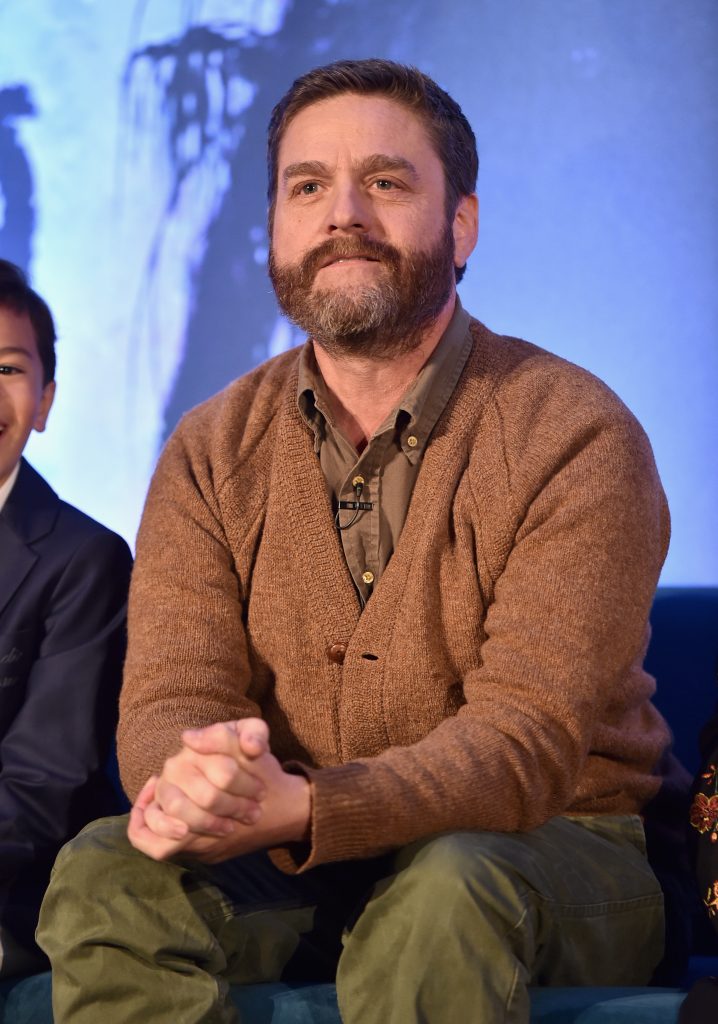 Zach Galifianakis, who gives a hilarious and heartfelt turn as the Happy Medium, riffed a bit on the casting process and being forced to eat “healthy” food at a meeting with DuVernay. But he turned sentimental when he spoke about his time on the set. “All the people here were very gracious and I think when you’re a stand-up comic you kind of have sometimes, not a chip on your shoulder, but…to be involved in such a big, big movie like this is really, it makes me…,” here Galifianakis seems to tear up a bit, “I feel real proud…I can’t really talk about it without getting emotional.” He stressed the importance of boys and young men also seeing the film, “To see that it’s okay to have a sensitive side of you.” Gathering himself, Galifianakis then cracked the room up with the self-deprecating comment that Josh Gad would have been better in his role.
Young stars Deric McCabe (Charles Wallace Murry), Rowan Blanchard (Veronica), and Levi Miller (Calvin) also charmed the audience and gave insight into their characters, speaking about the dangers of toxic masculinity and bullying faced by kids in these times, and that the movie is inspiring to young people who might not feel like they belong.
About making the film, DuVernay said, “There’s love in every frame of this movie and there’s love in every frame of everything that I do. I don’t have children. I won’t have children by choice. These films are my children, are what I leave behind. They have my name on them, have my blood in them. And so I feel I did that. And from there, you offer it up to the world and you hope that they can see our intention…to just give a little sweetness to the world in these dark times.”
DuVernay is the first black woman to helm a movie with a $100 million budget, an important distinction that will hopefully open doors for more female directors, especially women of color. The resounding endorsements from the artists who worked with her should at least bring even more high profile projects to DuVernay herself, who clearly deserves them. 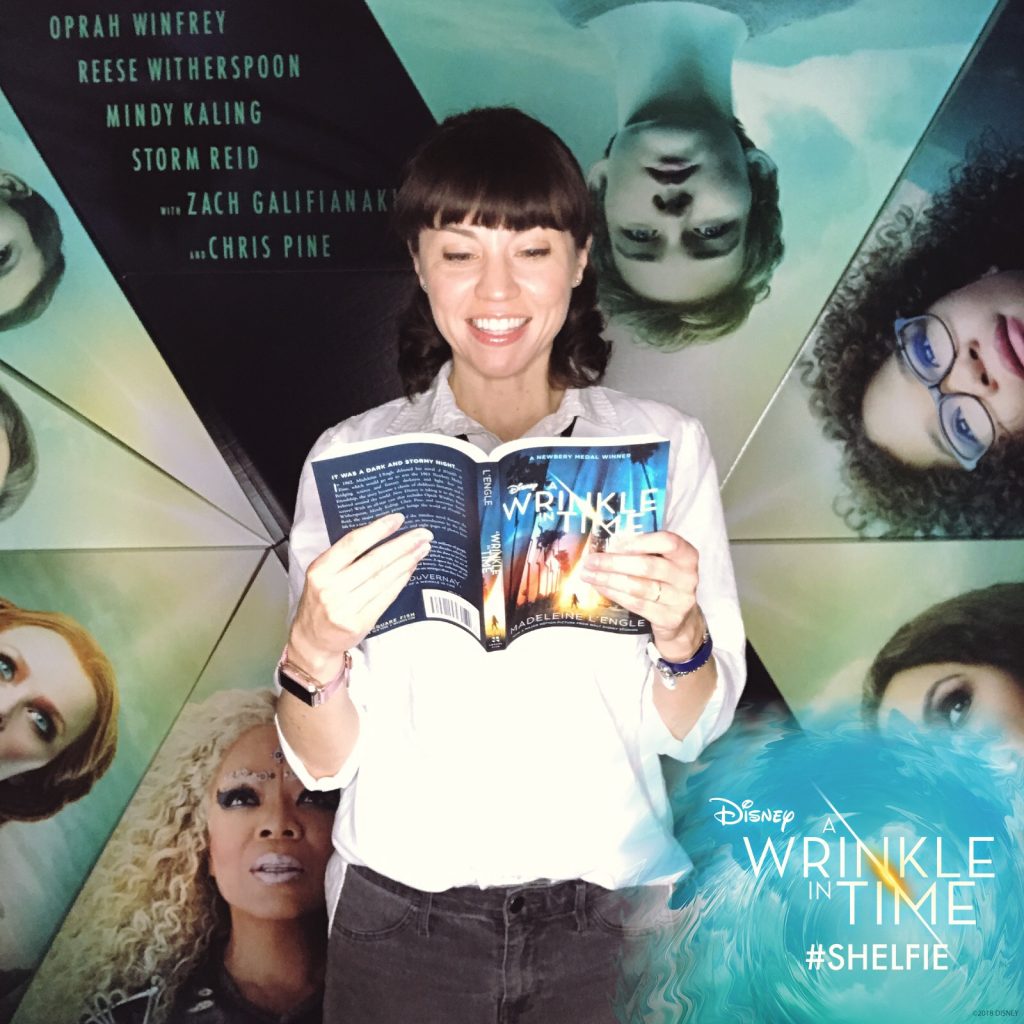 After the interviews (and after I got over the fact that I had briefly been breathing the same air as Oprah Winfrey), I revisited the photo area to take my “shelfie” with a copy of the “Wrinkle in Time” novel and contribute  to The Walt Disney Company’s Magic of Storytelling campaign with First Book to donate one million books to children in need. (Find out how you can help, too, at www.magicofstorytelling.com.)
“A Wrinkle in Time” opens nationwide on March 9, 2018, you can find tickets here.