Last month, I had a dream come true: I was able to visit Pixar Animation Studios for the first time! I had a lot of my readers curious about what it was like, so I’m now sharing a bit of the experience with you. When we arrived, we of course had to take many photos in front of the entry gate that says “Pixar.” The moment that’s been on my Disney bucket list was almost about to happen! 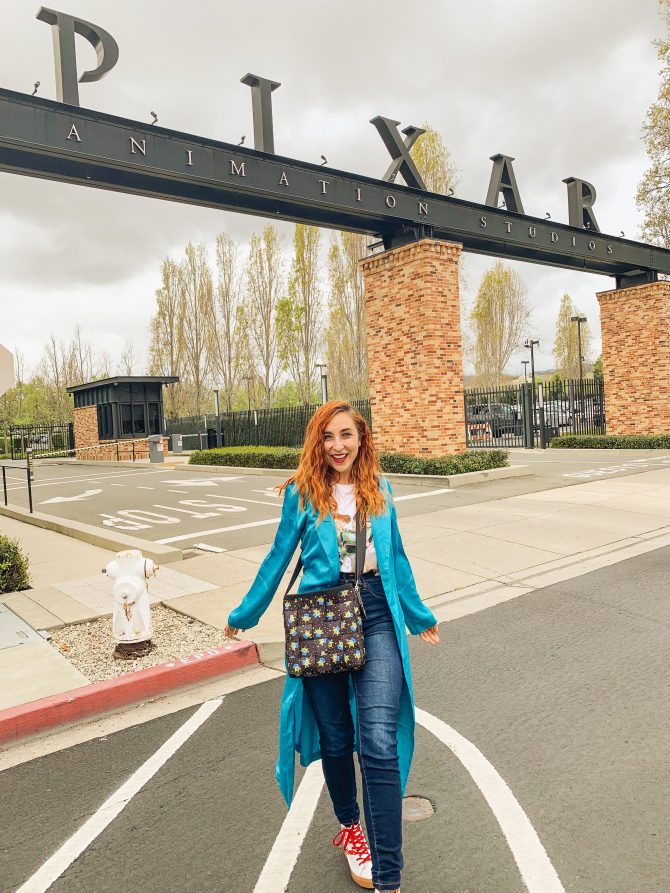 We then pulled in and walked up to the Steve Jobs building, where outfront you saw the iconic Luxo lamp and Pixar ball. That’s when I really had to start pinching myself, since it felt very surreal to actually be by the statues outside the Pixar main building, I never knew if I would actually get there someday, yet here I was! 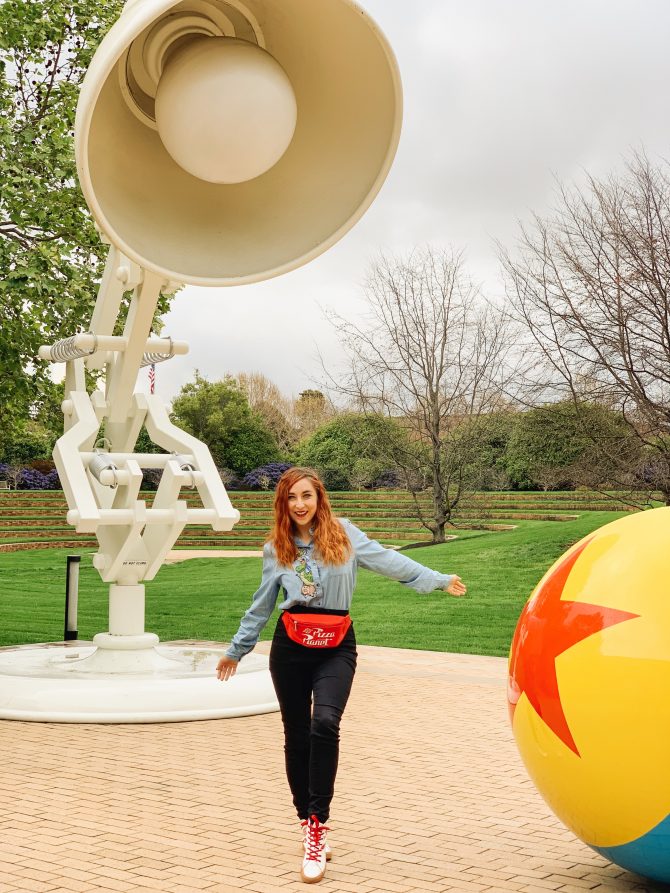 When you walk inside the building, you are awestruck by its design, which takes your eyes towards the end of the long lobby where there are couches and large print reflecting the current upcoming movie (at the time I was there, the print was of Bo Peep). When you walk around the lobby, filled with Pixar character statues, awards, and more prints of Toy Story 4 characters, it’s easy to see why this environment is conducive to such amazing creativity. 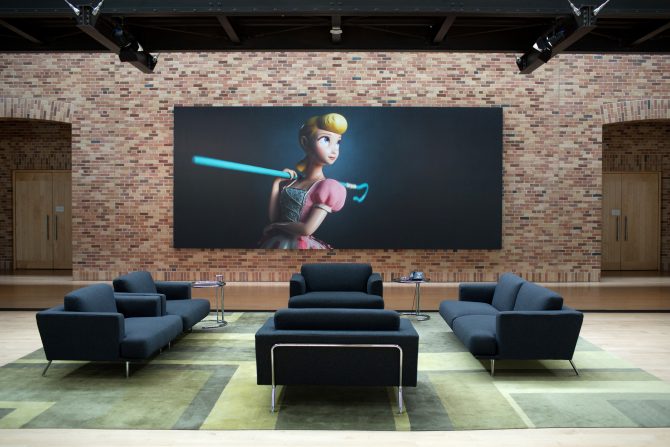 Toy Story 4 images in the atrium, as seen on April 2, 2019, at Pixar Animation Studios in Emeryville, Calif. (Photo by Deborah Coleman / Pixar) 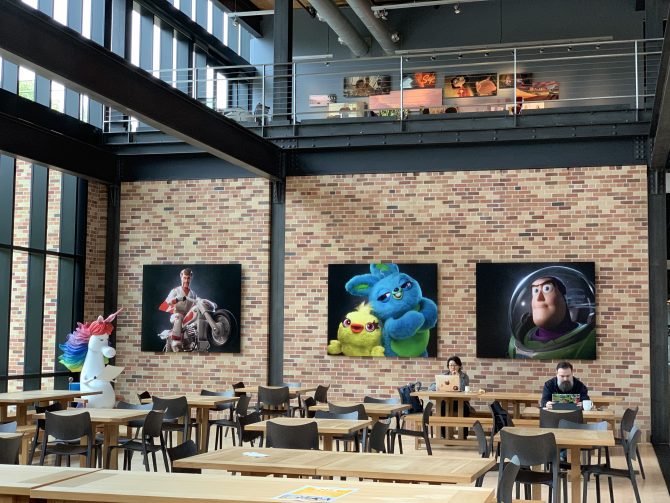 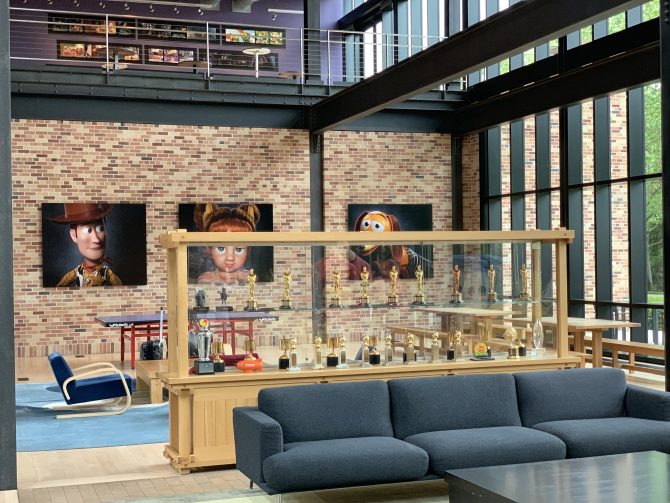 On our first night, we had a presentation about creating the original Toy Story, and how Pixar’s animation technology evolved over each Toy Story film (more on that for a future post). We then had the treat of watching the first 30 minutes of Toy Story 4. Watching that in Pixar Studios’ theatre completely gave me all the feels, and is a moment I will truly never forget. After we watched a piece of the film, we headed upstairs into their Toy Story 4 art gallery for appetizers and cocktails. The art gallery was full of art pieces in different styles made by many Pixar artists, including sketches, concept art, digital paintings, and more. There was also a display case of Forkys that some of the crew of the film made. 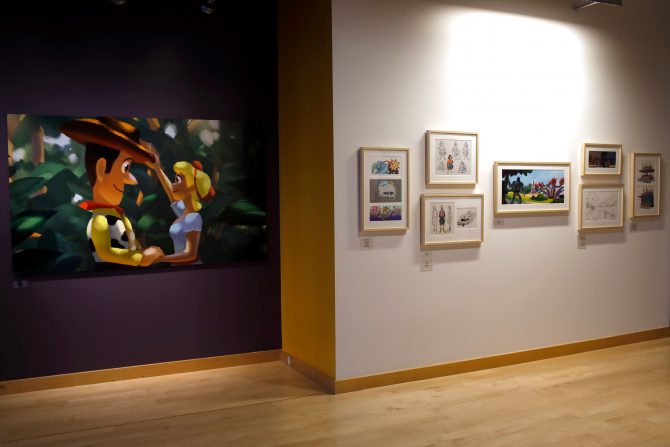 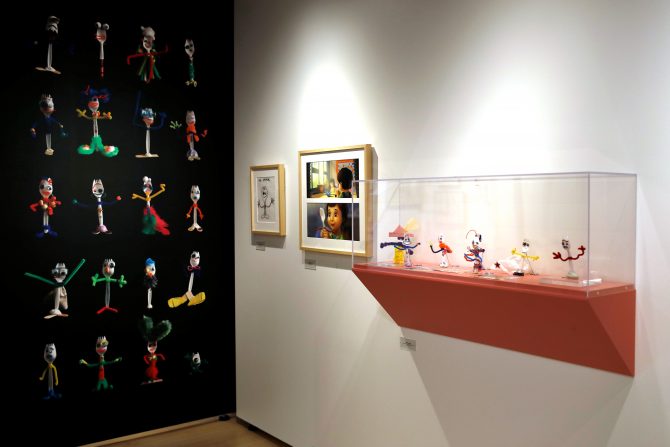 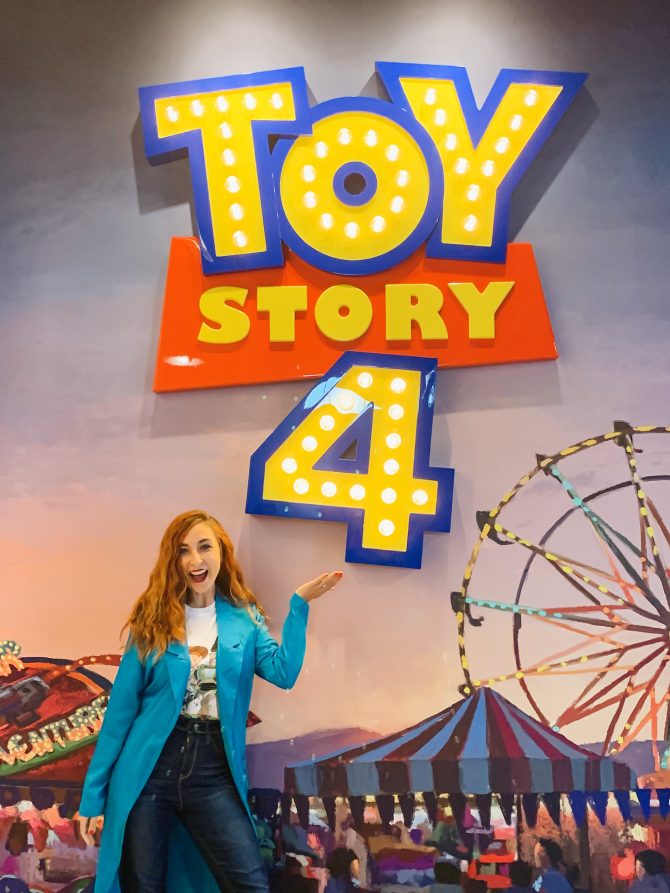 We then went back to the hotel for some sleep (which I had trouble getting because I was just way too excited). We headed back to Pixar the next morning for a full day of all things Toy Story 4! We went through many panels with the filmmakers, and learned the ins-and-outs of creating the new characters, revamping the original characters, and creating the new immersive environments such as the carnival and antique mall. After a busy (yet incredibly fun) day of going from panel to panel, it was time for a relaxing activity.

Pixar animator Claudio De Oliveira greeted us with a table full of materials to make our own Forky! De Oliveira told us about how when they were designing Forky, the spork that Bonnie created out of craft materials to become her new toy in Toy Story 4, they had a lot of the Pixar animators come together to make different Forky designs as a brainstorm session on what his final design might be.  It was De Oliveira who ended up crafted the final Forky design. 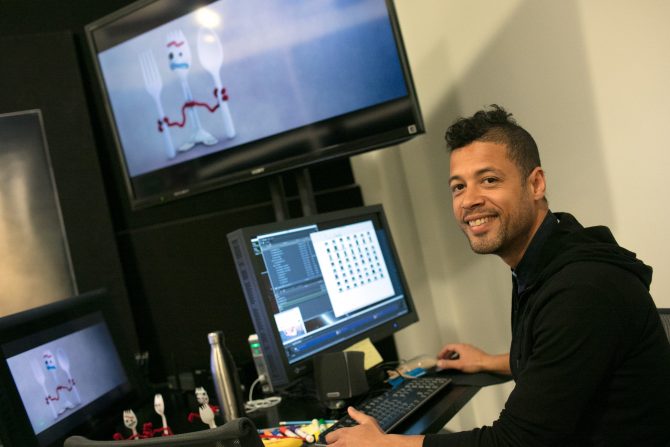 Claudio De Oliveira presents details about the creation of the character Forky, as seen on the Toy Story 4 Long Lead Press Day, on April 3, 2019 at Pixar Animation Studios in Emeryville, Calif. (Photo by Deborah Coleman / Pixar)

He put on classical music while we created our Forkys, which we discovered was quite a relaxing activity! I decided to craft a traditional Forky, since my 4-year-old, just from watching the trailer, fell in love with the character. She has a big collection of Toy Story toys, and since seeing sneak peeks of Toy Story 4 had been asking for a Forky toy. I thought creating her one at Pixar Animation Studios, his home of origin, would be a perfect and memorable souvenir! 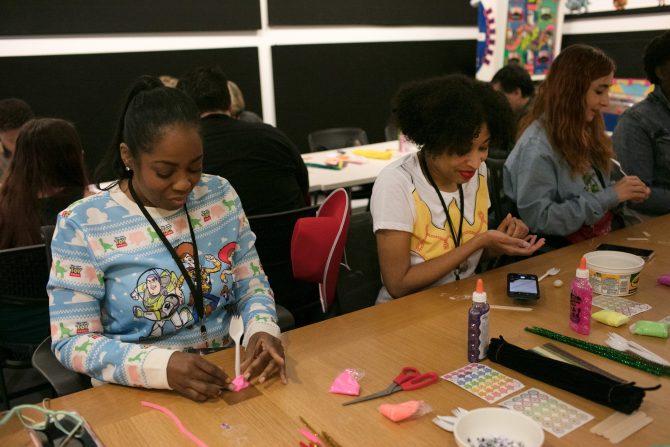 Press make their own version of Forky, as seen on the Toy Story 4 Long Lead Press Day, on April 3, 2019 at Pixar Animation Studios in Emeryville, Calif. (Photo by Deborah Coleman / Pixar)

De Oliveira’s daughter also immediately fell in love with Forky. He shared that as he was working on the design of the character, Forky was around at his house, and also became a favorite toy of his daughter, who is around Bonnie’s age. It was then time to take his Forky to Pixar Animation Studios, where he would use him often to observe the way he would move, and how he would look at different angles when he was animating him. They made the Forky in the film very accurate to the real life materials he is based on. He never blinks, since his eyes are googly eyes, and he has a wobble to his walk with feet that don’t move since his feet are popsicle sticks stuck inside air dry clay.

THREE-IN-ONE – He’s not a fork. He’s not a spoon. And most of all, Forky is not a toy! At least that’s what he thinks. Bonnie created him from an assortment of supplies Woody’s retrieved from the kindergarten trash can. So, it’s no wonder Forky feels strongly that he’s trash and not a toy. Featuring Tony Hale as the voice of Forky, Disney and Pixar’s “Toy Story 4” opens in U.S. theaters on June 21, 2019. ©2019 Disney/Pixar. All Rights Reserved. 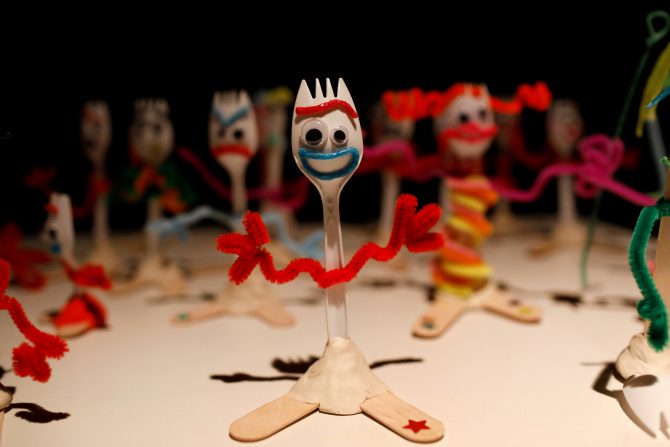 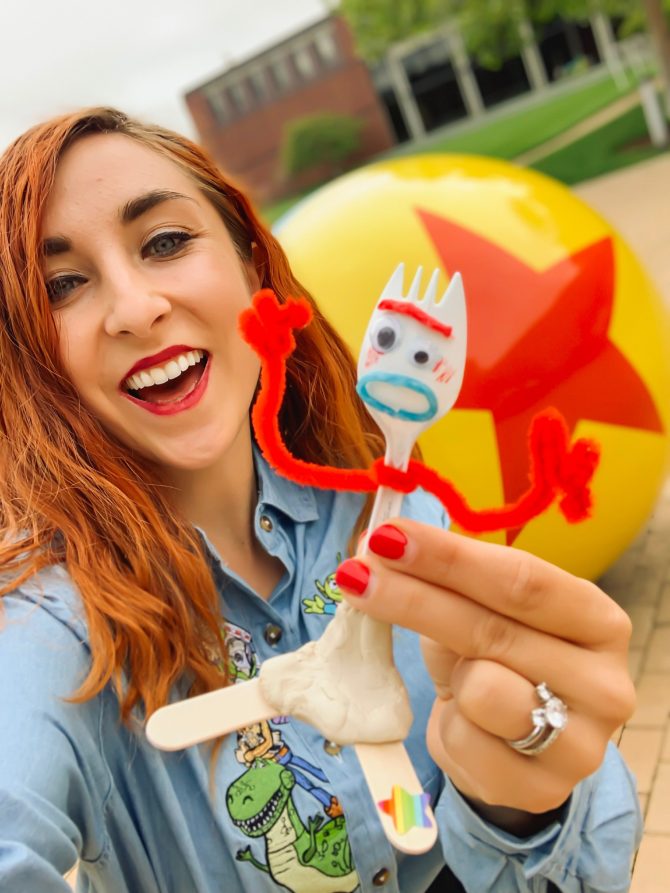 My Forky I made at Pixar Studios 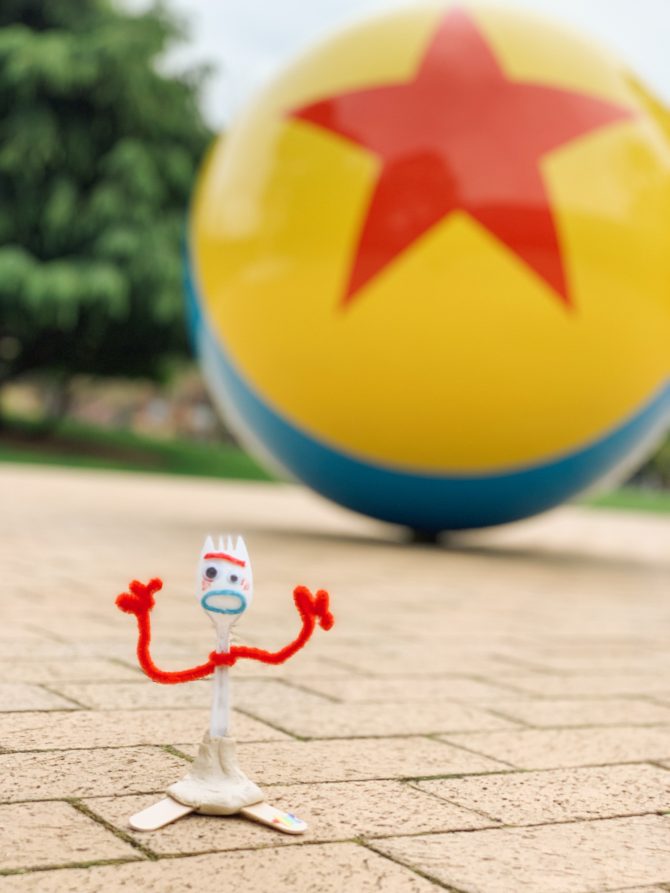 After the film wrapped, he was thrilled he could bring the original handmade Forky home, so his daughter could be reunited with him! My daughter was also thrilled when I brought home Forky, and we did an Elf on the Shelf sort of thing and placed him in a different place for her to find each morning. Remembering how fun it was to craft our own Forkys, I bought the materials for us to make some at home. My daughter, also loving Pixar as much as I do, had the brilliant idea to make more Forkys that are Forky versions of various Pixar characters. 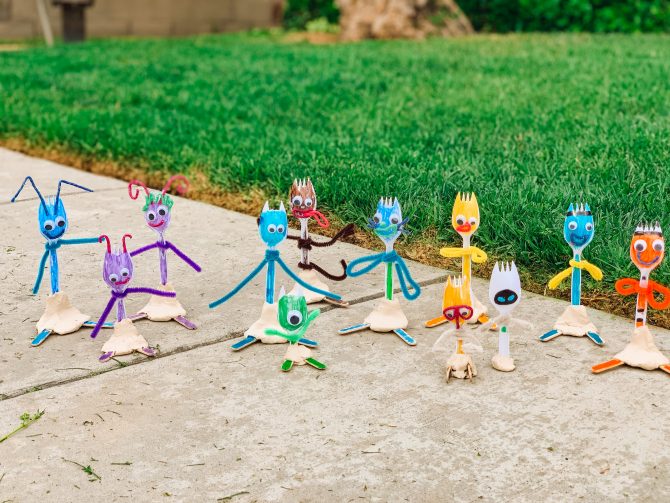 Letting our creativity flow like this, creating and playing with toys made out of such simple things, really made me think about what Toy Story is all about. Happiness from the simple things like love, creativity, spontaneity, play and family, which can easily get pushed aside in our busy schedule-packed world. Creating and playing with Forky, and seeing the joy he brings a child shows that the creativity and fun of play can really come from anywhere. 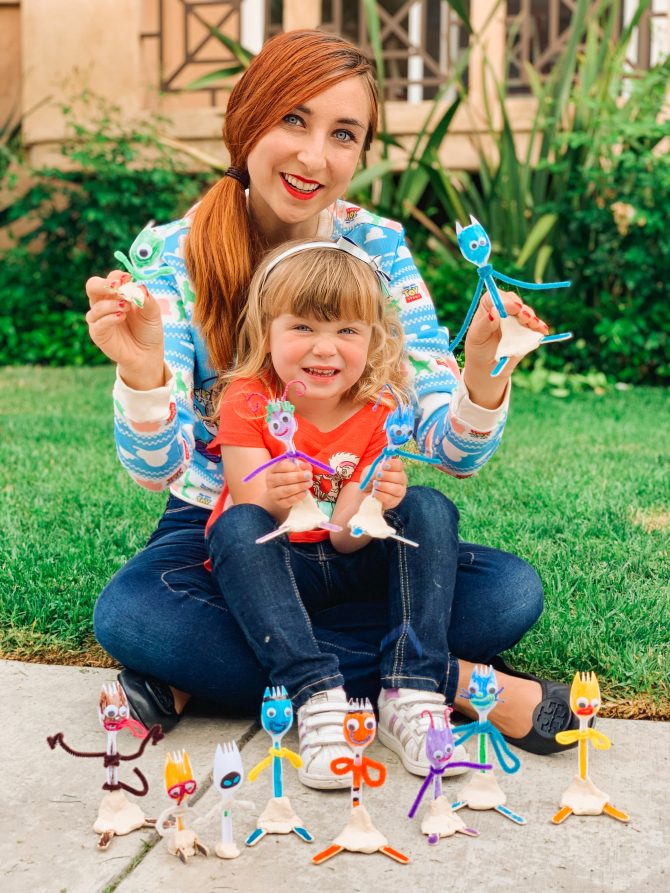 I have many more stories to tell about my visit to Pixar, and what all I learned about the making of, which will be coming throughout May and June, so stay tuned! Toy Story 4 comes to theatres June 21st. 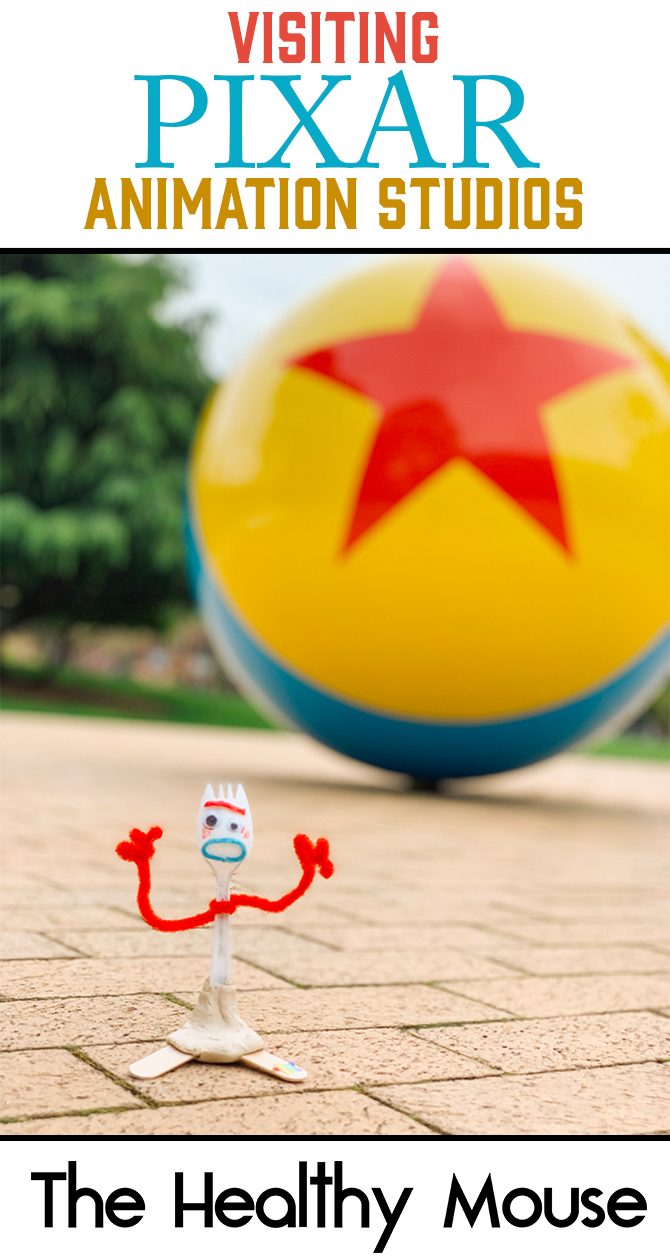