Toy Story Land is a Must Visit at Walt Disney World Resort!

Disclosure: My visit to Walt Disney World Resort was hosted, but all thoughts and opinions are my own.

I just got back from one of the most amazing trips – a press trip to Walt Disney World in Orlando for the Toy Story 4 press junket! On the trip, we saw an advanced screening of Toy Story 4. After getting to see the movie, we then were able to be fully immersed in the world of Toy Story by visiting Toy Story Land at Disney’s Hollywood Studios. 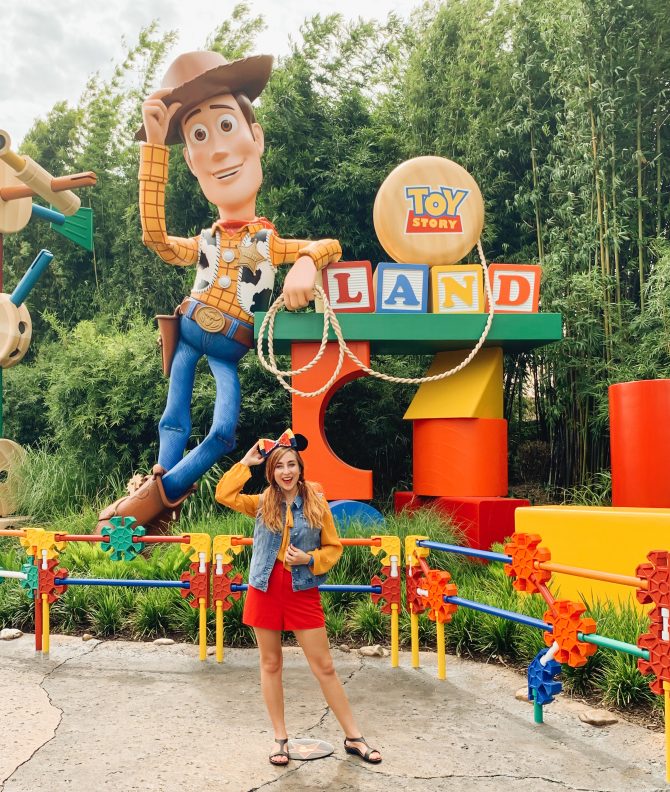 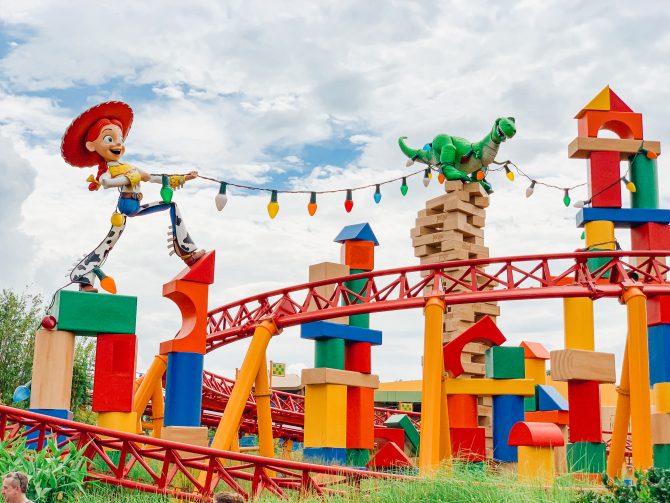 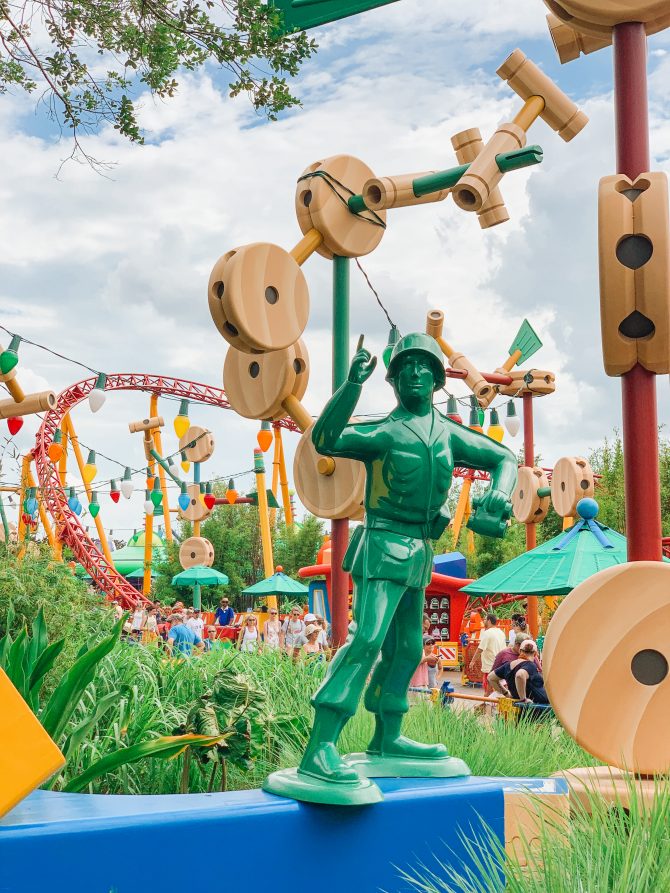 Having grown up with Toy Story, all of the films are very sentimental to me, and they are my favorite Pixar movies. Being able to walk into a land where you feel you are the size of a toy (since everything around you is oversized), ride Toy Story-themed rides, and meet and interact with the beloved characters is a priceless experience, and definitely a must-see on a trip to Walt Disney World.

My favorite part of Toy Story Land are the attractions! I love that for the size of the land there are three attractions, a pretty good ratio! You can find Toy Story Midway Mania (the same one as in Disney’s California Adventure, although the queue line is very different), Alien Swirling Saucers, and Slinky Dog Dash. The rides are very kid friendly. My four year old is able to go on two out of the three rides (not quite tall enough yet for Slinky Dog Dash), so it’s a great place to visit at Walt Disney World for families! 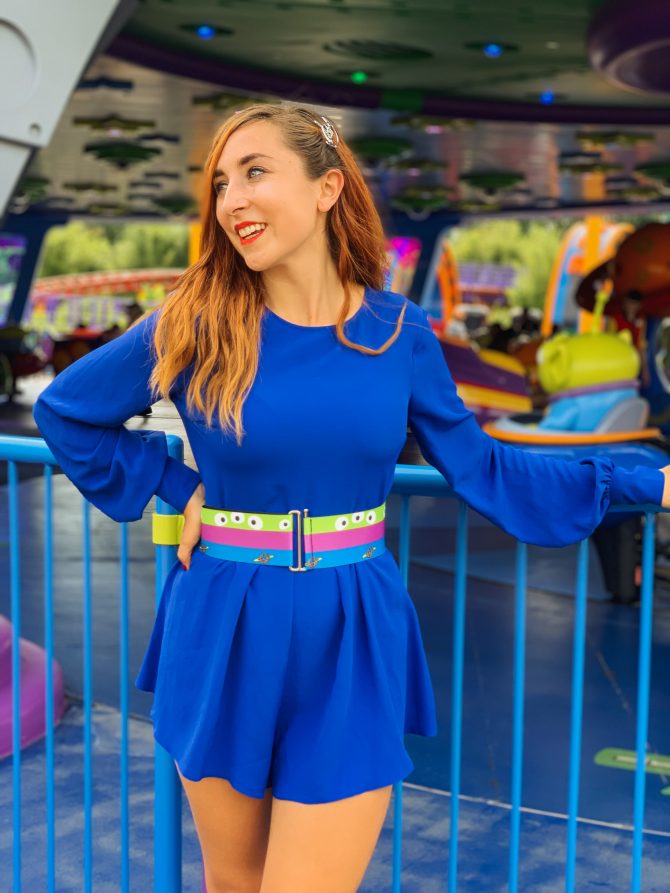 Alien Swirling Saucers has adorable theming! I have always loved the Aliens from the Toy Story films, and it’s so cute that they are on each car! As you’re riding, Toy Story music is playing, and the galactic lights on the ceiling light up and change color. My daughter has been on this ride with me before and absolutely loves it. If you are familiar with Mater’s Junkyard Jamboree at Disney’s California Adventure, it is a similar type ride but obviously with a very different theming. 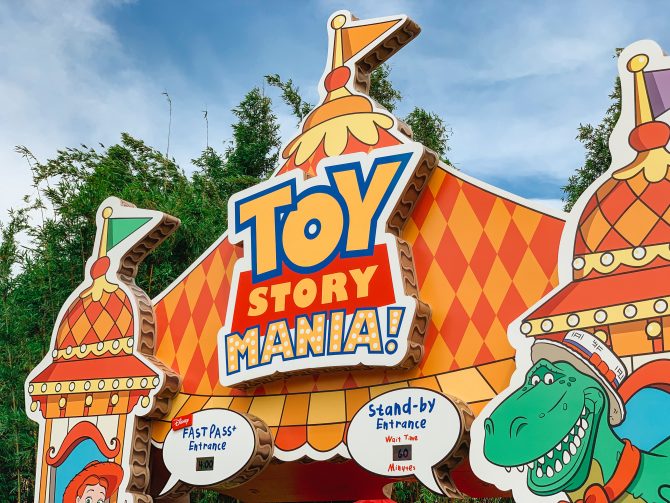 Toy Story Midway Mania is always a fun attraction to ride, since no matter how many times you ride it it’s always a different ride since it’s a game and ride all in one. And the more times you ride, the more you can improve your skills at the game as well as potentially find hidden targets and ways to get high scores. 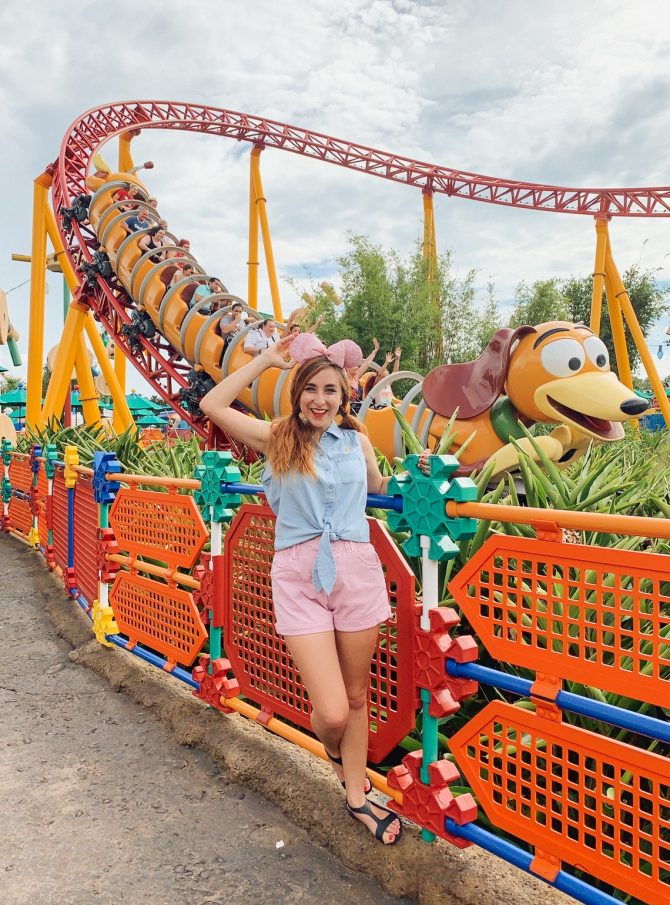 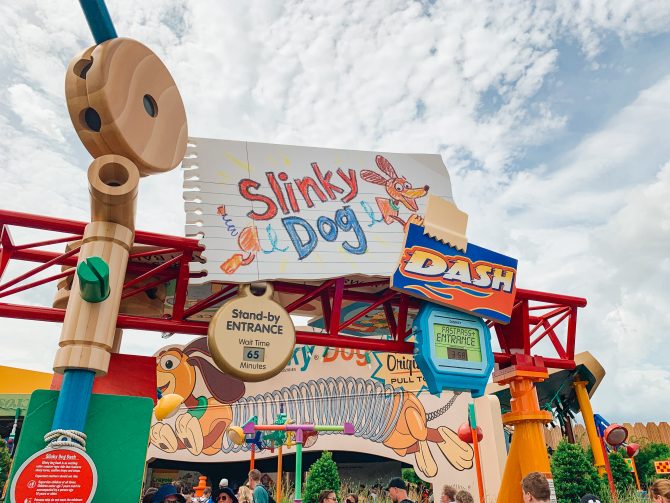 My favorite attraction is hands down Slinky Dog Dash. This roller coaster is actually pretty thrilling (but not too scary for kids), and the ride was a good length – not too short at all! Plus, the fact that you’re actually riding in a vehicle that looks just link Slinky Dog is the cutest theming ever! Throughout the ride, you can see characters such as Rex, Jessie, and Wheezy. Another fun element that Toy Story fans are sure to love are the Easter eggs. As you walk into the queue line, the sign for Slinky Dog Dash has Buster’s dog tag hanging from it. Above Wheezy, you can see a book that says “Partly Cloudy”, a nod to the Pixar short. As the ride begins, you can see Rex’s packaging that says “Triceratops coming soon” (implying Trixie). These are just a few of many! 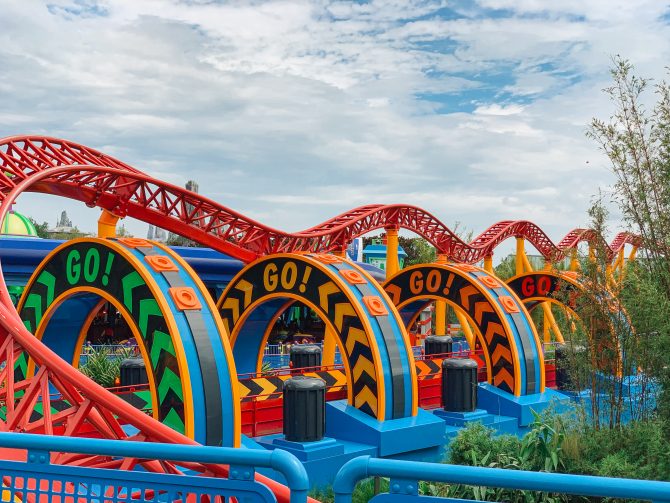 Tunnel that you go through on Slinky Dog Dash

The Food and Merchandise

The quick service restaurant in Toy Story Land is Woody’s Lunch Box. It is sponsored by Babybel, and I love that you can even get a package of Babybel cheese from there, a perfect quick and healthy snack while you’re exploring the land. They also have a delicious three-cheese grilled sandwich (since I’m vegetarian that’s the one sandwich I’ve tried, but I know people love their BBQ brisket). They serve breakfast, lunch, and dinner. An iconic treat from Toy Story Land are there Lunch Box Tarts. I absolutely love the strawberry one! (See full Woody’s Lunch Box menu here.) Coming soon to the land is a table service Toy Story-themed restaurant, called Roundup Rodeo BBQ. I can’t wait to try it out! You can learn more about it here on Disney Parks Blog. 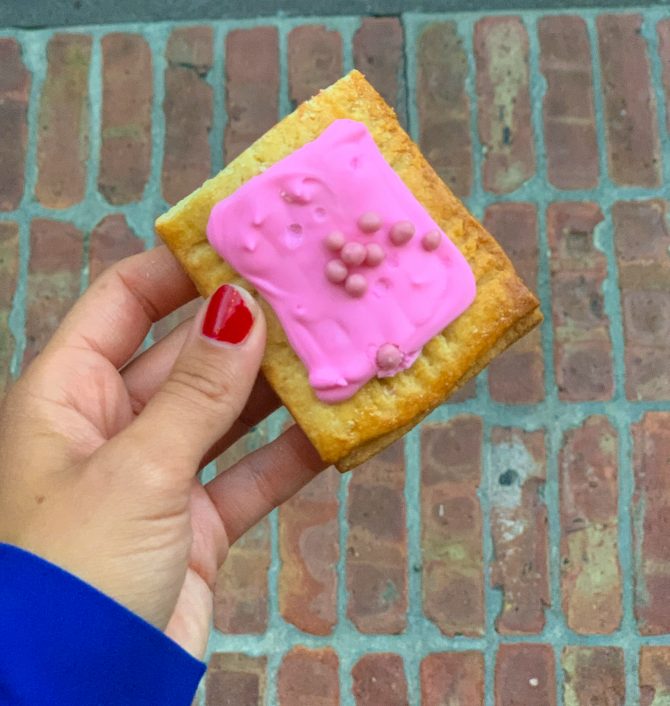 There are also some merchandise stands throughout Toy Story Land with some pretty cute stuff! My favorites are the Slinky Dog headbands, the Pixar ball pillows, and the souvenir I got for my daughter, a little racetrack with a mini Slinky Dog Dash ride vehicle. My daughter can’t yet go on the coaster but is so excited to, so this toy is super fun for her to fulfill her Slinky Dog Dash dreams in the meantime! 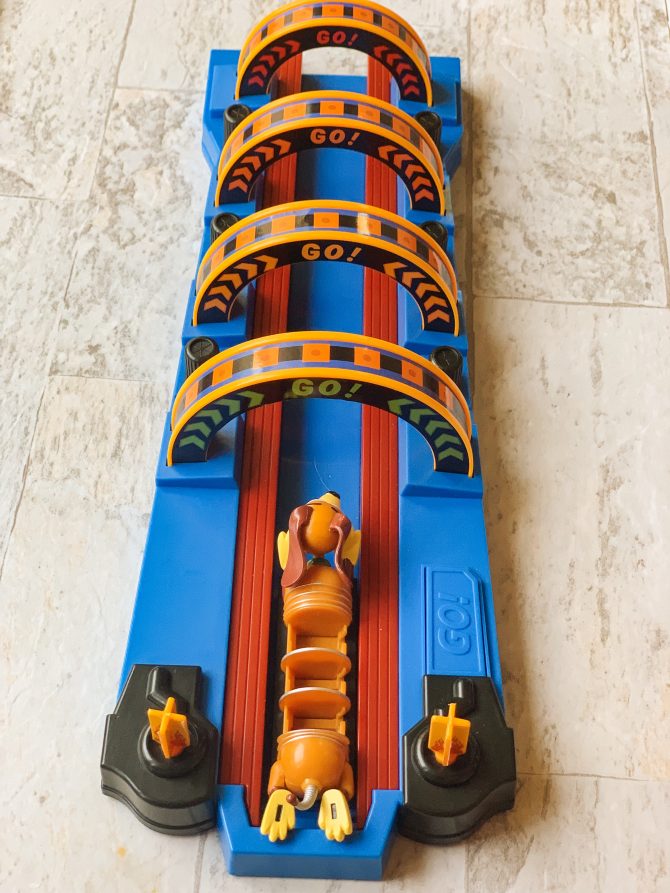 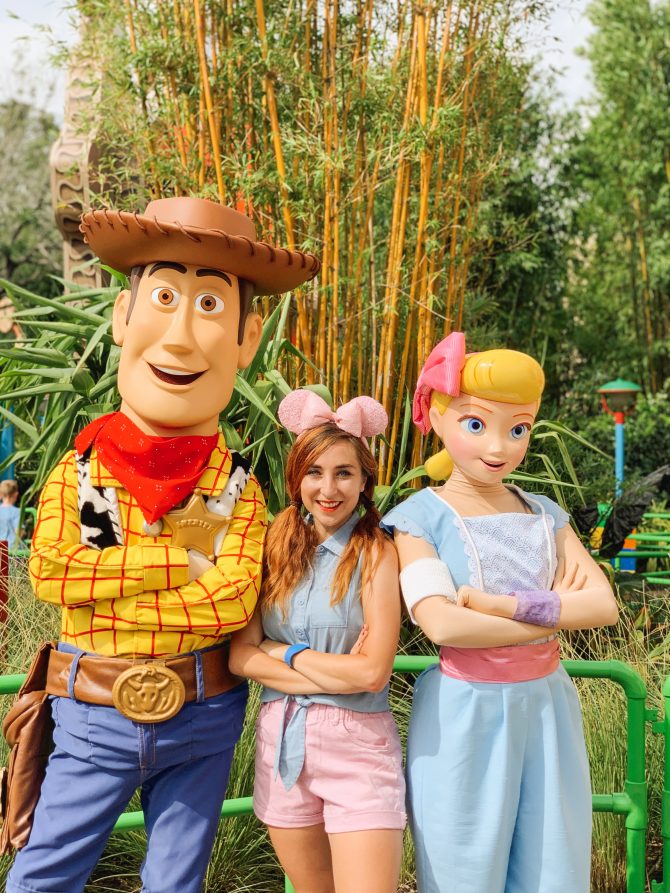 You can now meet Bo Peep in Toy Story Land!

What would a Toy Story Land visit be without getting to meet some of your favorite characters? I love that this land has so many character interactions, especially now with Toy Story 4 about to come out in theatres June 21st. You can meet Buzz (normally near the entrance), Jessie, and then near the Toy Story Midway Mania entrance, Woody and Bo Peep (in her new outfit). Bo and Woody do their meet-and-greet together, which makes for a super cute photo op, and great character interactions. It was so cute seeing the two lovebirds interact with one another! 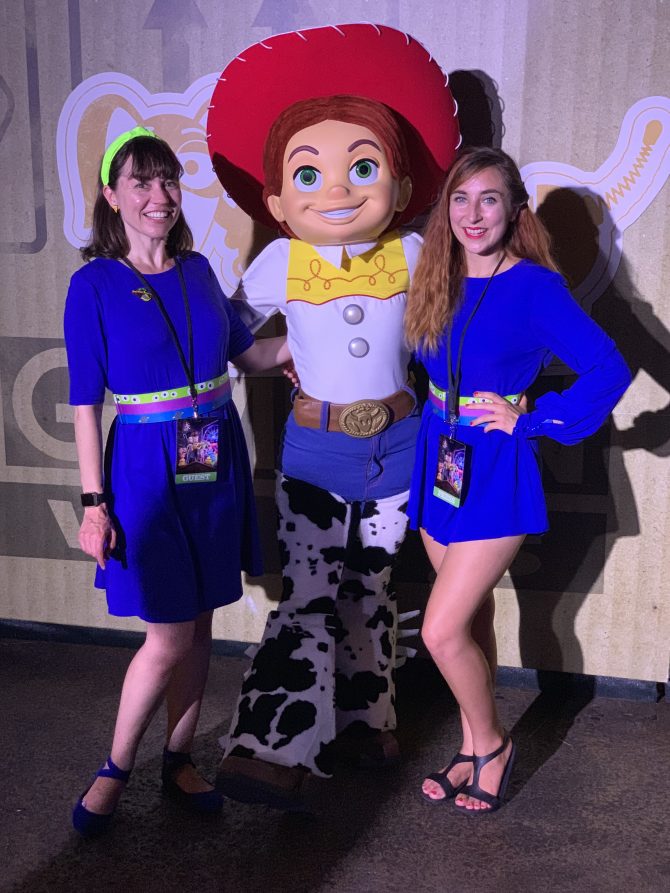 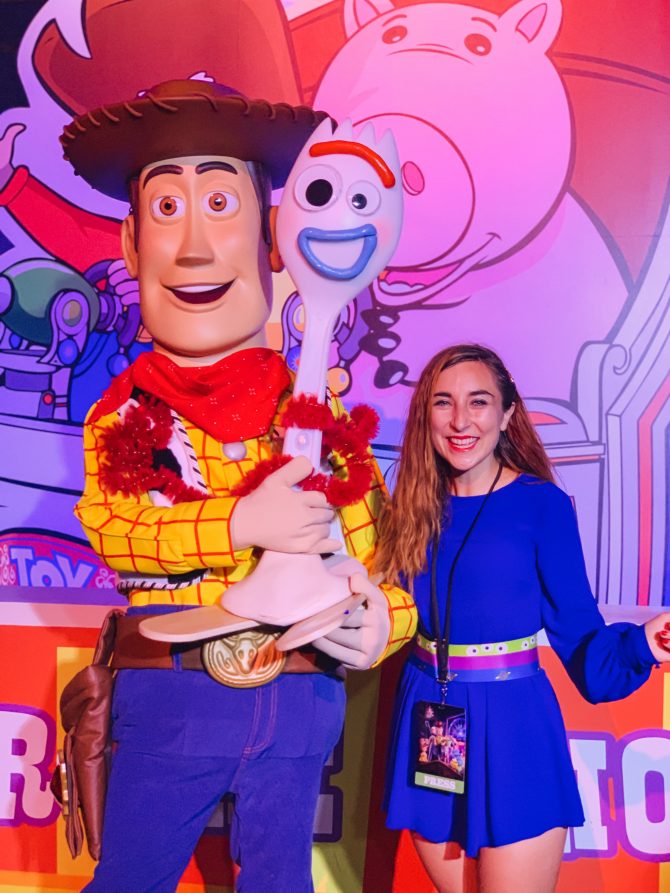 The Forky was only for a private party I attended – just an FYI! 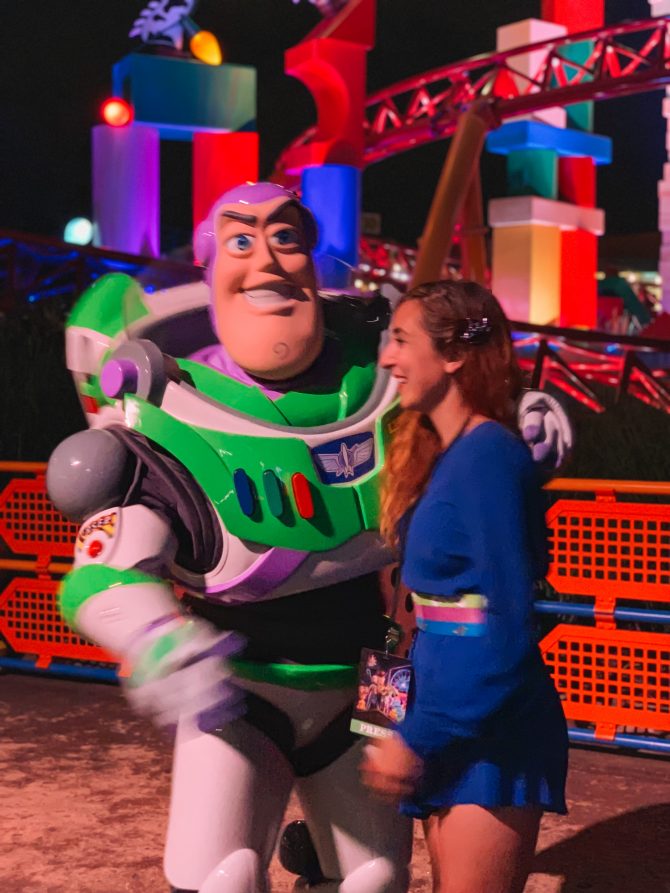 I know this picture is blurry, but I had to share it because it captured the pure joy I was experiencing in Toy Story Land!

Also throughout the day in the land, you can often spot the Green Army Men marching through. They always have hula hoops, bouncy Pixar balls and other fun toys to play with the guests. What an incredible experience for kids to be able to actually PLAY with Toy Story characters! 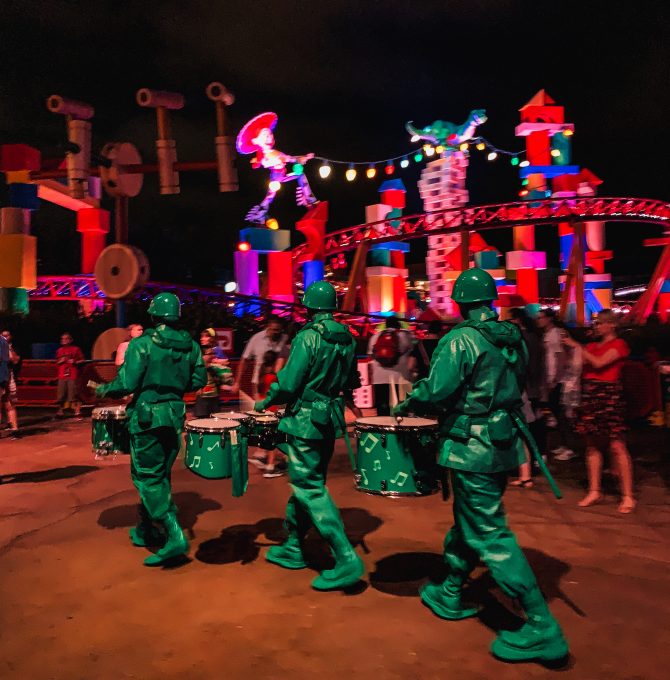 So I know my main point of this blog post is that Toy Story Land is an absolute must-see when visiting Walt Disney World Resort. Well, I am here to tell you it isn’t only a must-see once, but I highly recommend visiting it TWICE! Once during the day, and once at night. I had only ever been during the day prior to this trip, and at night it transforms into a new experience. 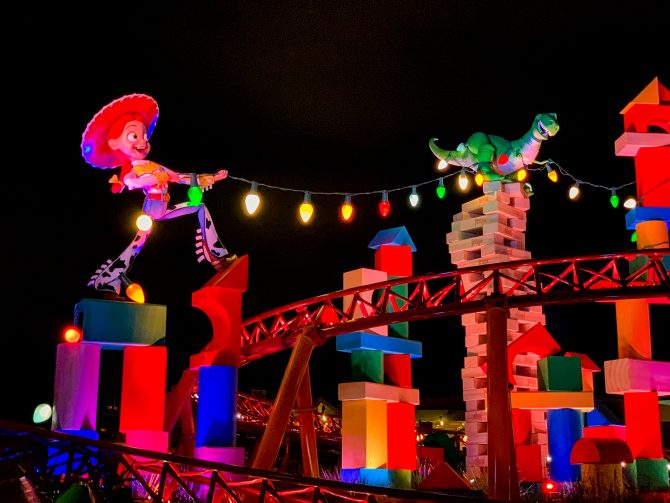 When you walk into Toy Story Land, your eyes are immediately drawn to Jessie and Rex overlooking Slinky Dog Dash, who are holding Christmas lights. It looks beautiful lit up for the evening! Riding Alien Swirling Saucers and Slinky Dog Dash also feel like unique experiences once the sun goes down. On Alien Swirling Saucers, it feels like you are truly in space since the light up stars on the ceiling really are clearly seen with the dark night sky. It feels like a true galactic experience! 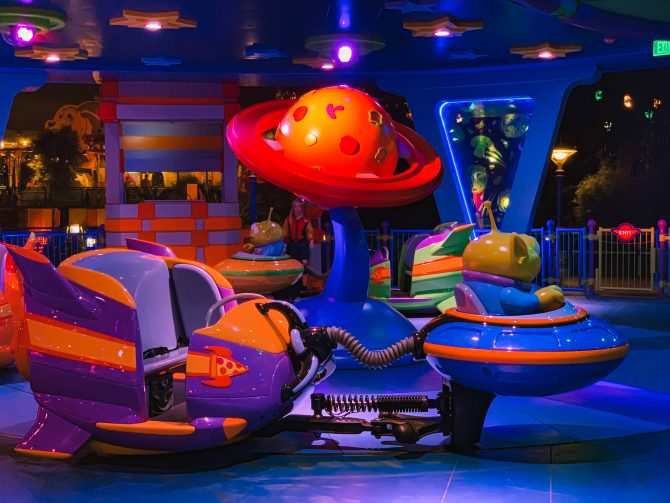 I rode Slinky Dog Dash three times at night, since I loved it even more then! They have lights all along the track, and the part of the ride where you’re going through the tunnel is very well lit with flashing lights, adding to how thrilling the ride is. The combination of drops, speed and lights, plus being able to see Star Wars: Galaxy’s Edge in the distance when you’re at the top of the coaster is very magical! 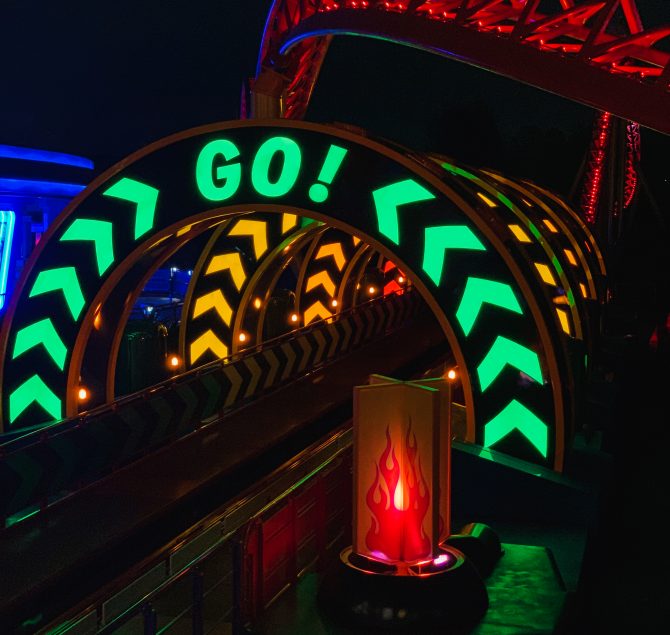 I can’t wait for my next trip to Toy Story Land. I think by next time my daughter will be tall enough to ride Slinky Dog Dash, she talks about it all the time! I would love to hear what you think about Toy Story Land, and what you’re favorite part is about the land. For me, the immersiveness of the environment, the details of the rides and inclusion of favorite characters in the rides, the delicious food, and offerings of character interactions makes this one of the best lands at Walt Disney World.

Disney & Pixar’s Toy Story 4 is coming to theatres on June 21st! Stay tuned for my full review of the film. However I will say now that after seeing it it’s my favorite Toy Story movie! 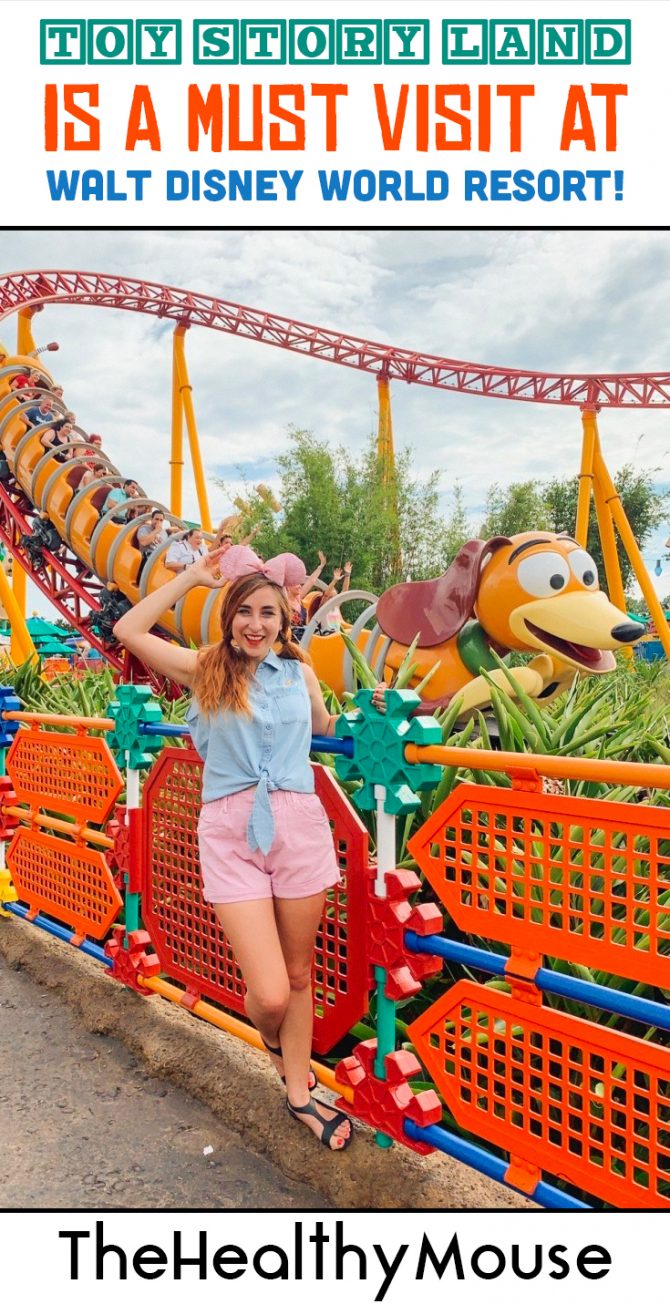