Last year I went to my very first Disney red carpet, for The Nutcracker and the Four Realms. I was beyond giddy, since attending a Disney World Premiere had been a lifelong dream of mine. Growing up, I would have never guessed that I would be able to go to one. I was so thankful for that opportunity, and was fortunate enough that because of the hard work I’ve put into my blog, I was invited again to the premieres for Dumbo and for Aladdin. Each experience was amazing in it’s own unique way, as no two premieres are alike. Even though I had three Disney premieres under my belt, I get so excited for each experience and treasure the memory of attending! I was floored when I got a certain premiere invitation though, for Toy Story 4. Having grown up with Toy Story, and the films always being very dear to me, plus with its history and legacy of beginning full length computer animation, the chance to attend the premiere for the final Toy Story film was quite the once-in-a-lifetime opportunity. 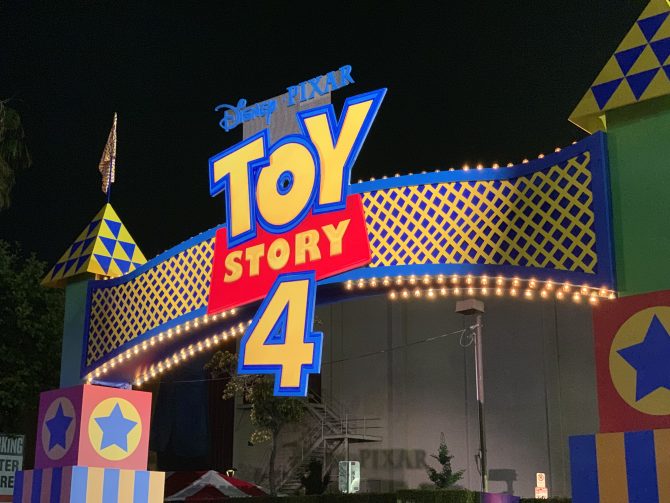 I was my daughter Amelia’s age when the first Toy Story came out, so I thought it would be extra special if I brought Amelia as my date to the premiere – it was going to be her very first Disney World Premiere! We came up with some coordinating looks for the occasion (you all know I love a themed outfit). I did an outfit that was inspired by Buzz Lightyear, and Amelia’s was inspired by Jessie. My lavender sequin dress had a galactic feel I thought – I got it from ASOS (where I shop for most special occasions). For my Buzz Lightyear bag, I got one of the new Danielle Nicole Toy Story purses. I loved that I could carry it as a purse, or wear as a mini backpack that had glitz and glam. Having the ability to wear it as a backpack when I was following Amelia around, plus she was collecting some goodies throughout the night, came in handy! Amelia’s yellow dress was from Amazon (gotta love Prime), and her sparkly boots and hat were from shopDisney. 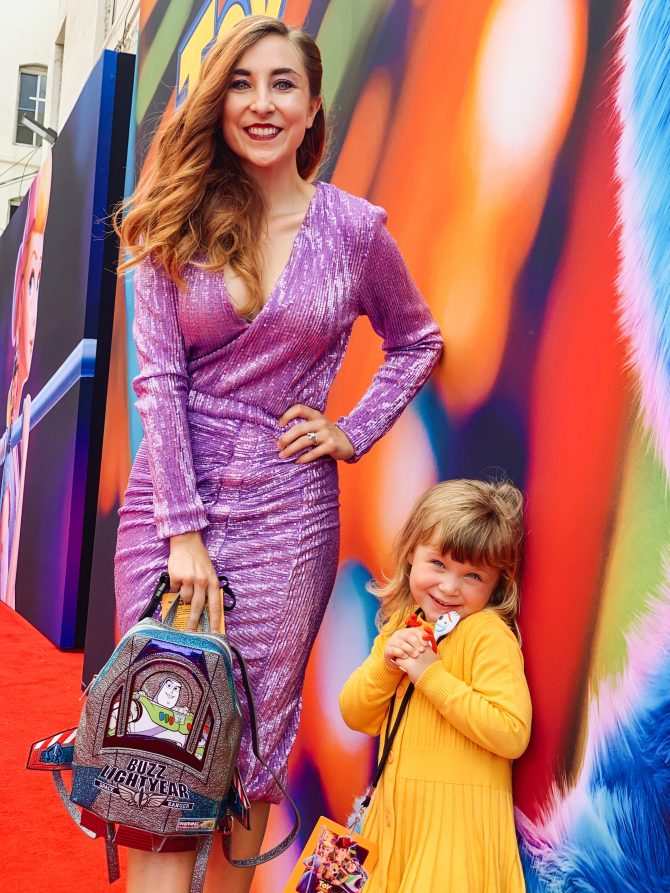 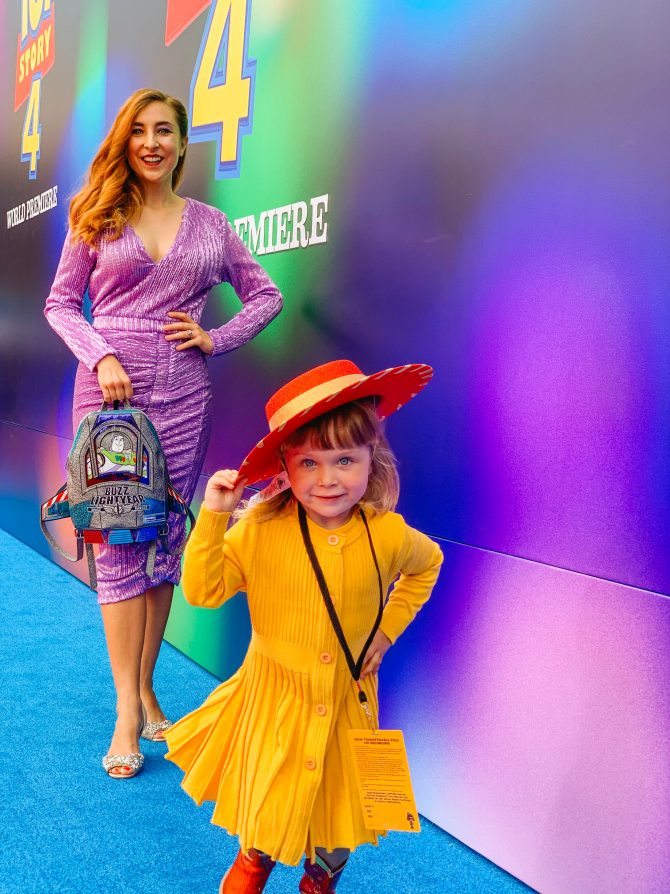 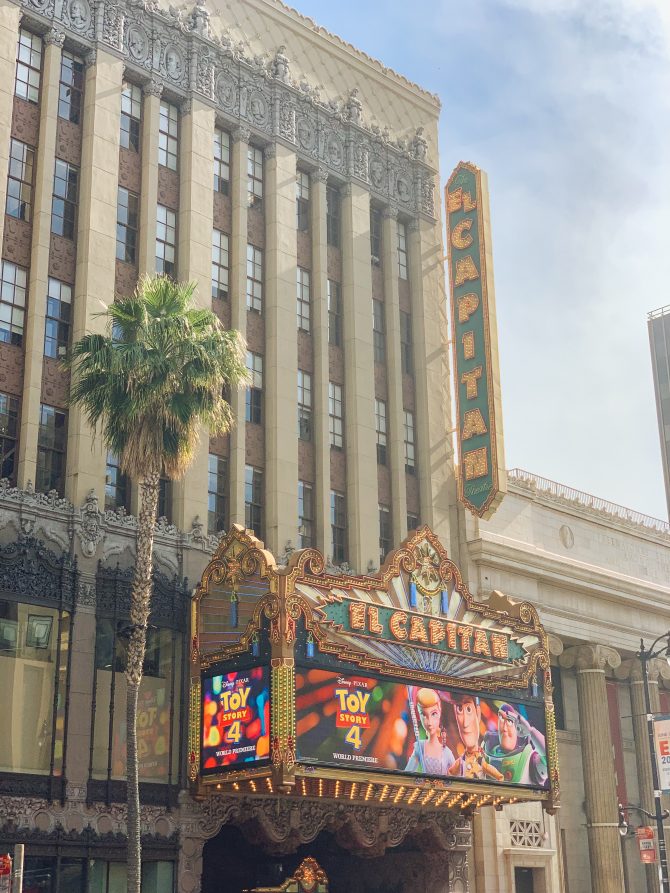 We walked through the carpet to the entrance of the El Capitan Theatre, where most all of Disney’s premiere screenings are held. It’s such a gorgeous historic theatre, and love that they always create special theming and experiences for every Disney movie that comes out! They had a candy bar where you could fill up Toy Story 4 Ziploc bags (Amelia was very excited for this!). We then got our Toy Story 4 popcorn buckets for the screening! It felt so exciting to be watching the movie in the same theatre at the same time as the creators and actors of the film. The energy is always very excited and joyful during a premiere screening because of that! Since this was my second time seeing Toy Story 4 (my first time was at the Walt Disney World press junket), I was watching Amelia’s reactions throughout the movie. Not only was I crying during emotional moments (Pixar’s great at that), but I was crying at moments seeing Amelia at the edge of her seat enthralled with the movie. I just couldn’t believe how I was watching Toy Story 4 with her as my date for the World Premiere, getting to see her watch a Toy Story movie on the big screen, just like I was able to when I was her age. It will be an experience I’ll never forget. 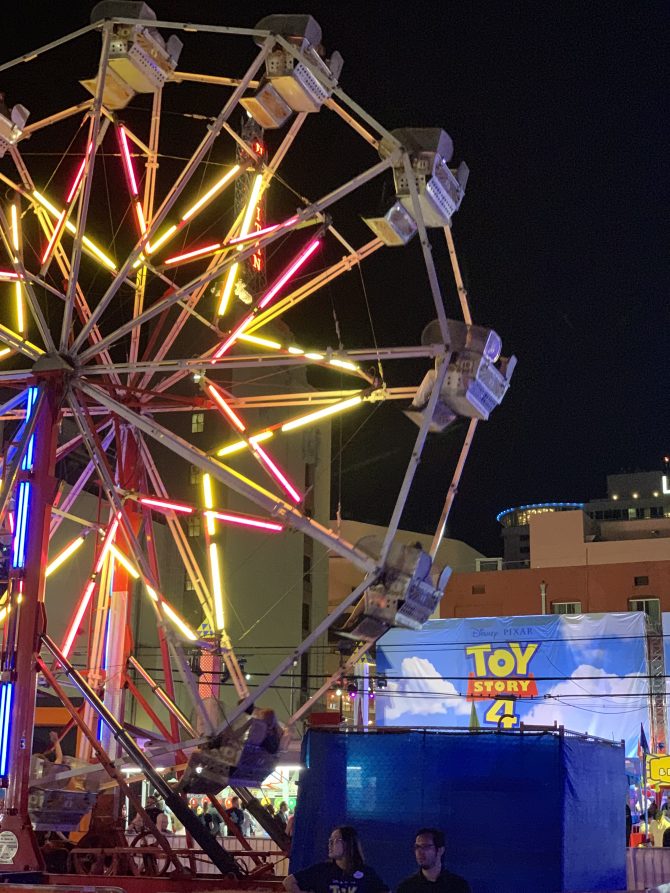 After the movie, we went to the after party, which was probably the most epic one I had attended! It was so large that instead of being set up on Hollywood Blvd, they used the space behind El Capitan. There were lots of carnival games which Amelia played to win prizes, a mini McDonalds where you can get a new Toy Story 4 Happy Meal toy, bouncy house, food and drinks, a live band, and a ferris wheel! My daughter gasped in excitement when she saw the ferris wheel, saying, “Wow it’s the actual ferris wheel from the movie!!!” It was so cute taking in the sites of the after party being able to see it all through Amelia’s perspective. We even were riding the ferris wheel at the same time Christina Hendricks (Gabby Gabby) was! There were also character meet-and-greets with Buzz, Jessie, Woody, and Bo Peep. Amelia got to end her night meeting the stars of the film. 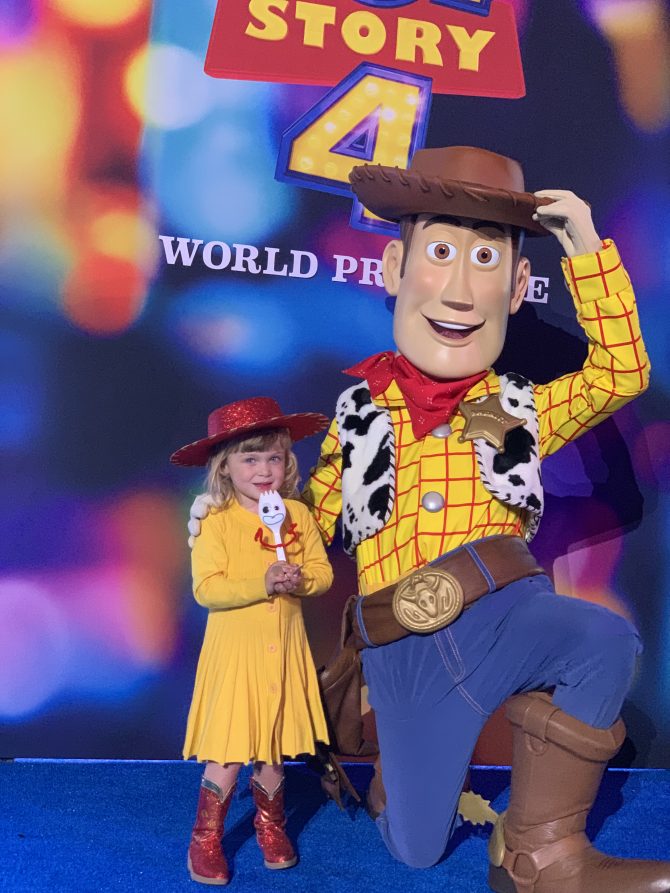 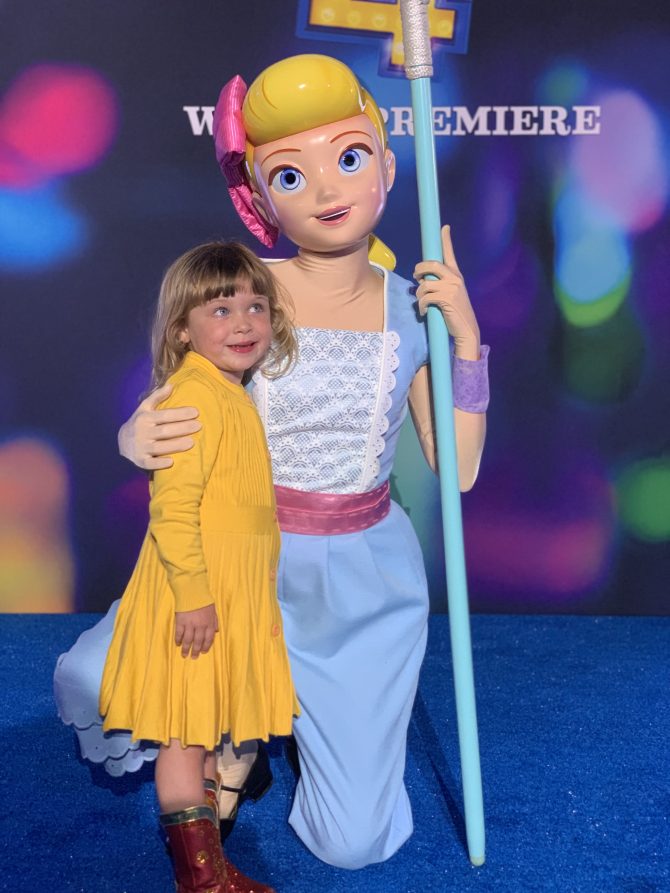 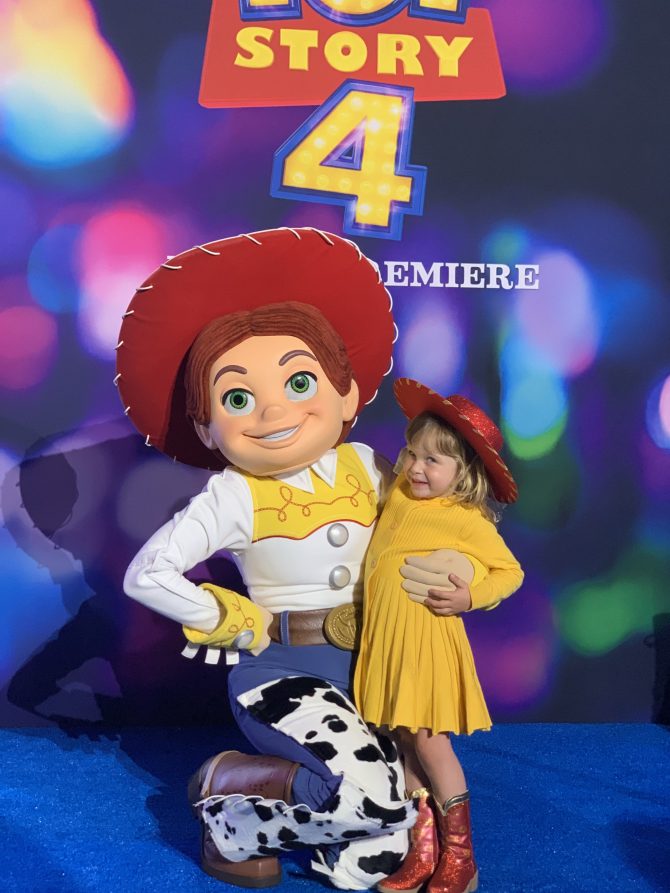 It was such an honor to be invited by Disney to attend the Toy Story 4 World Premiere! And I can’t thank my readers enough for your support and readership during my blogging journey to help make it all possible! Toy Story 4 comes to theatres June 21st. You can read my review, plus Amelia’s reaction during the movie here. 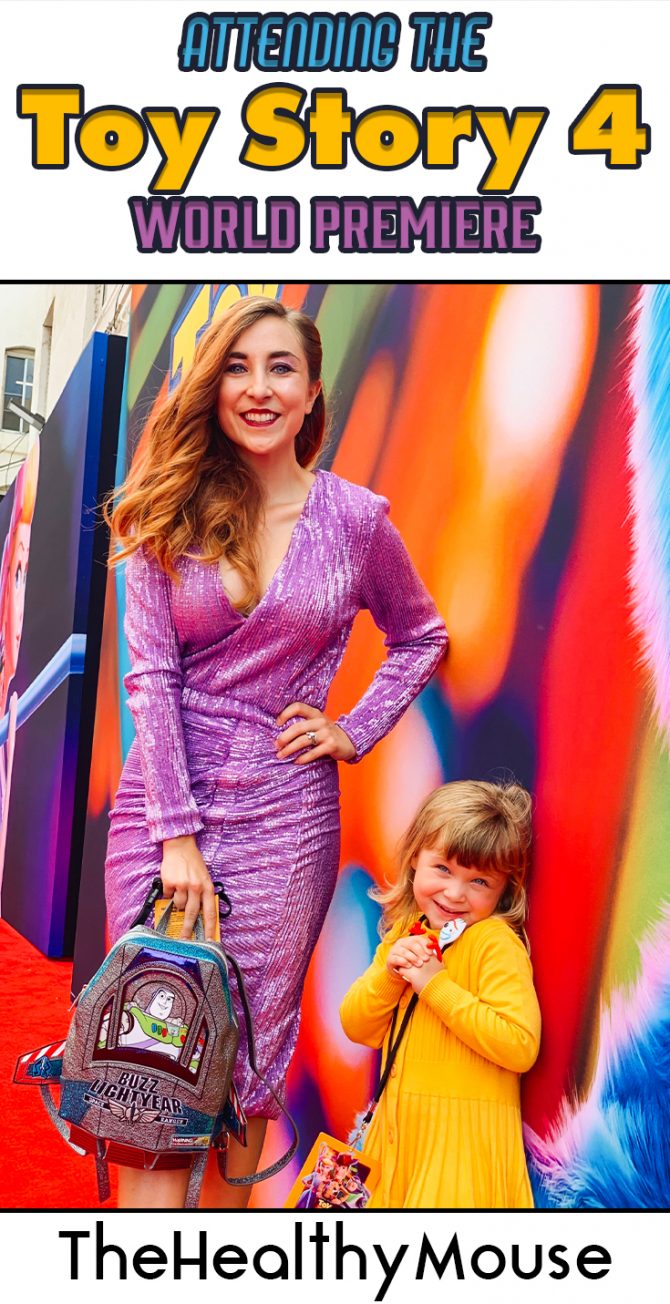