In 1995, the field of feature animation was changed with the release of Toy Story, the first feature length film using computer animation and the first feature produced by Pixar. Since then, the film and its characters have become internationally recognized symbols, with Woody and Buzz Lightyear becoming as iconic as Mickey Mouse himself. In 2010, Toy Story 3 was released, seemingly putting a definitive end to the story of Andy and his toys, so fans were surprised when it was announced that a third sequel would be released. Now, 24 years after the original was released, Toy Story 4 tells the continuing story, focusing on Woody and his quest to discover what it means to be a toy.

The new film picks up a few years after the events of the last film, with Woody, Buzz, and the rest of the toys in their new home with their new kid, Bonnie. Bonnie, being a creative and imaginative young girl, makes a simple toy out of craft supplies and a spork, naming him “Forky.” To the other toys’ surprise, Forky comes to life, facing an existential crisis as he’s neither a toy nor any longer a utensil. As Woody tries to take care of the nervous toy, the two become separated from the rest of the gang after Forky tries to escape while Bonnie and her family are on a road trip. Stranded in a small town far from Bonnie, Woody by chance happens upon an antique shop where he finds his long lost love Bo Peep, who has long ago given up Woody’s firmly held beliefs of what a toy can be. As Woody grapples with his own outlooks on life, a baby doll with ill-intentions named Gabby Gabby and her army of antique ventriloquist dolls set out to keep the heroic cowboy from leaving ever again.

It should come as no surprise that the film is an intense, emotional experience, eliciting tears throughout. Though the genuine comedy of the original and its sequels remains, there is plenty of room for surprising choices, and the film heads into new and different areas and is tonally very different. I saw Toy Story 4 for the first time five days ago, and it’s one of those films that is so beautifully unpredictable and crafted that you continue to think about it and be wowed the more you process what you saw. In typical Pixar fashion, they write stories for their beloved characters with the utmost care. They would never create a new story after the ending of Toy Story 3 unless they had a really profound story they needed their audiences to see.

Much of the comedy comes from the newcomers to the story, such as Forky (voiced by Tony Hale), who shines as the neurotic yet simple-minded spork who insists that he is “trash.” After now seeing the film twice, Forky has become my favorite character of the film, not only because of his amazingly hysterical lines and delivery, but because the exploration for him and audiences on what makes something a toy that’s alive within the Toy Story universe. Also standing out are two ringers, Ducky and Bunny, voiced by hilarious comedy duo Keegan-Michael Key and Jordan Peele (formerly of the Key & Peele sketch show). The two midway prize plush toys act as street-wise guides for the toys, helping our heroes traverse the traveling carnival that has set up across from the antique store. 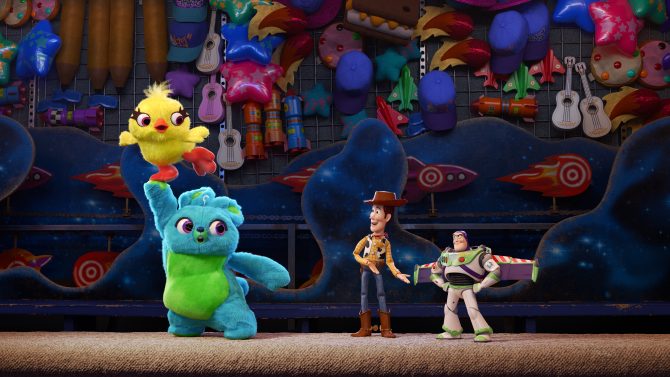 How Will Young Kids Do Seeing the Movie?

My 4-year-old absolutely loves Bunny and Ducky, they have been the standout characters to her that she keeps talking about! Since the film does have some moments that can be a little scarier for young kids, having Ducky and Bunny periodically jumping in with comedic bits really helps level out the intensity and humor of the film to help keep kids from being too scared. And if you’re wondering if it might work for your child to see it, my 4-year-old who gets scared easily ended up doing fine and sat through the whole entire movie and has been talking about how much she loved it. She jumped at a couple parts because she was surprised but didn’t affect her in the long run. She also loved seeing Bo Peep be the adventurer that she is, and in her words said, “she is so cool!” I loved that they had a character in this film like that, who was feminine yet daring and adventurous. Such a great character for kids to see, to show that you can be both.

As I mentioned earlier, in the days since first seeing Toy Story 4, I’ve been unpacking it and thinking more about it. While staying true to the characters, the film is still very different from other Toy Story movies in a few ways. Here were some that came to mind that I thought were interesting to think about:

The Toy Story films hold an unprecedented spot in many people’s lives, as many adults and parents have literally grown up with the characters. With the franchise still willing to take bold, daring choices in where it takes its characters, there will no doubt be several competing thoughts and opinions about the direction the film took. For my part, I loved every bit of the movie, and I cried more during it than any other Toy Story film. Like for many who grew up with the film, these characters feel like family, and it was emotional yet beautiful to see the character arcs they had at the end of the journey.  Without a doubt, Toy Story 4 is a worthy addition to the modern classic franchise. Toy Story 4 is in theatres on June 21st, you can visit here for tickets as well as information on the opening night fan events and Toy Story movie marathons. 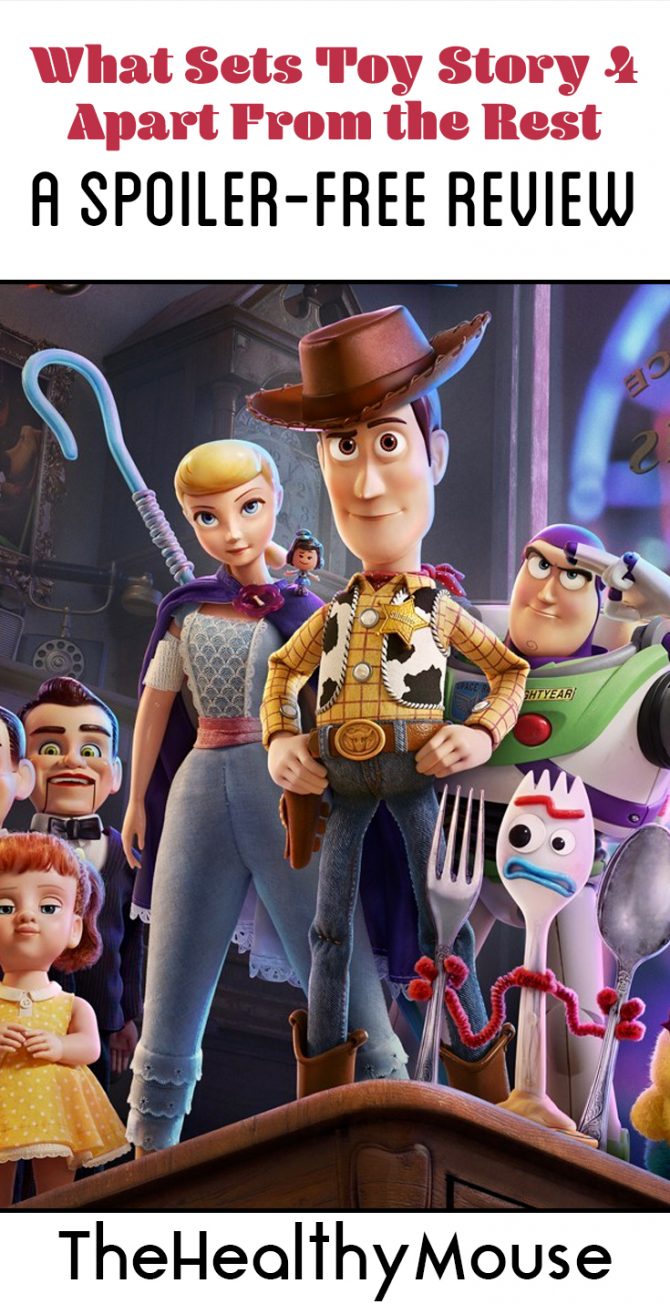