One of my favorite things about each new Toy Story movie is the introduction of new characters! Pixar puts in so much time and dedication into developing characters that fit perfectly into this world, that it’s always exciting to see what new story and dynamic each additional character adds. For Toy Story 2, we had Barbie, Jessie and Bullseye, in Toy Story 3 we had all of Bonnie’s toys join the crew, and now for Toy Story 4, we have some new very interesting characters we meet in the antique store setting that I was able to learn some more about when I visited Pixar Animation Studios earlier this year. 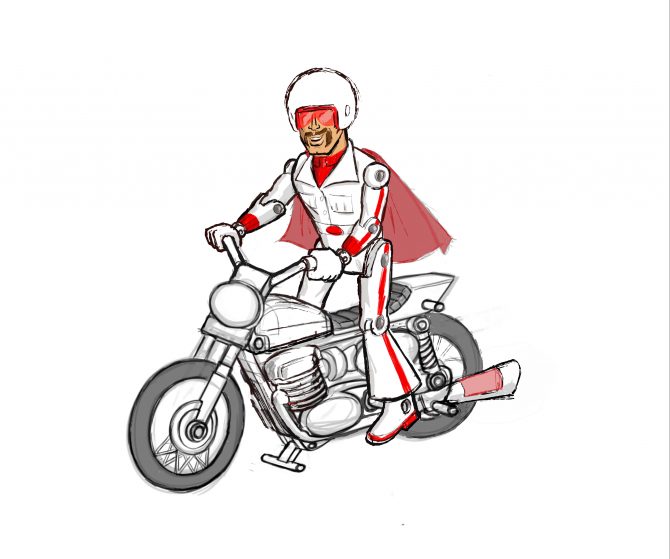 Duke Caboom, the Kanuck with all the luck (voiced by Keanu Reeves), is a character we meet in the antique store setting of Toy Story 4. His character, as I’m sure is obvious by his costume, is a Canadian stunt performer. We first are introduced to him inside a vintage pinball machine that’s within the antique mall. At Pixar, they took this setting seriously even though it’s shown briefly. They took apart a real pinball machine to see what the gears and lights actually look like from the inside, to accurately make it the setting an antique toy nightclub of sorts. In this scene, we learn about Duke Caboom’s backstory (don’t worry, I won’t give it away here), and he gets introduced to Woody for the first time. The Canadian animators at Pixar were all hoping to be able to animate Duke, so his animation ended up being primarily all of Pixar’s Canadian animators. 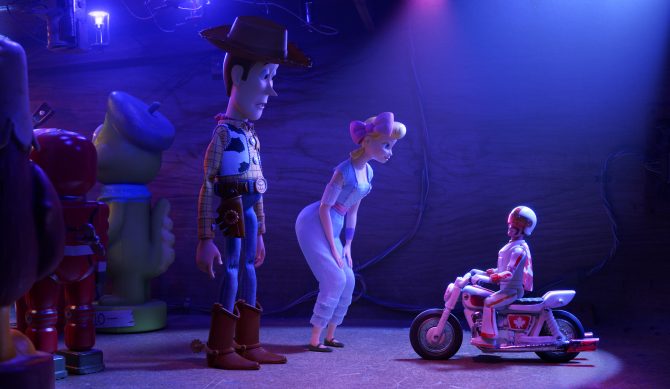 DUKE CABOOM – In Disney•Pixar’s “Toy Story 4,” Woody and Bo turn to a 1970s toy called Duke Caboom for help. Based on Canada’s greatest stuntman, Duke comes with a powerful stunt-cycle, and he’s always prepared to show off his stunt poses with confidence and swagger. Featuring Keanu Reeves as the voice of Duke Caboom, “Toy Story 4” opens in U.S. theaters on June 21, 2019…©2019 Disney•Pixar. All Rights Reserved. 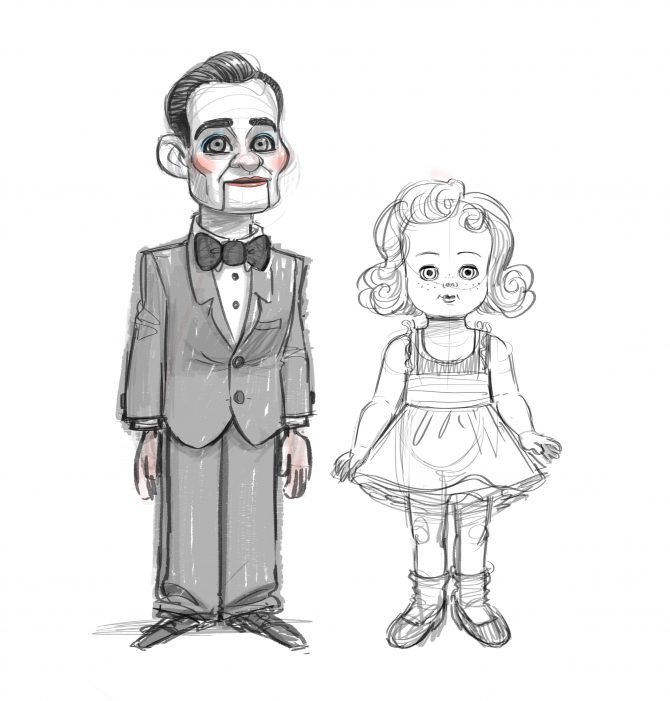 Benson, the ventriloquist dummy that is Gabby Gabby’s sidekick of sorts, is quite a unique Toy Story character. His movements are very different from most toys, as his whole body is pretty limp. The animators at Pixar took apart actual ventriloquist dummies to make their rigging accurate. Not only does Benson move differently than other Toy Story characters, but he also isn’t as vocal, instead communicating with facial expressions and the occasional grunt, both helping make his character a little creepy but humorous (I guess that’s how you would describe an actual ventriloquist dummy too, come to think of it). 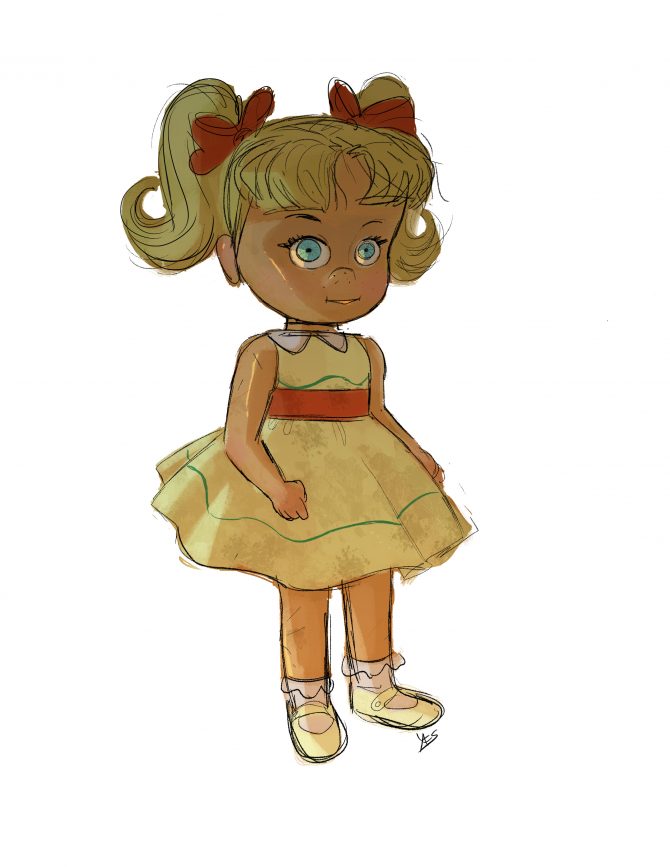 Gabby Gabby (voiced by Christina Hendricks), it seems as more people have seen the movie, have been considering her one of their favorite Pixar characters. She certainly has become one for me, I love how complex her character is, and I think she has a really interesting story. The team at Pixar realized that for the Toy Story films, they had never had a character that was just a classic doll. They wanted to do a character like that for Toy Story 4, thus the idea of Gabby Gabby was created. Just like with the development of “the new Bo” for this film, the animation team did lots of research by attending doll shows. They took a look at vintage dolls especially, since Gabby Gabby is supposed to be from the late 1950’s. They also needed to make sure that she didn’t look too human, and had to incorporate small details to make her more “doll like”. For example, they made sure the material of her hair was thicker than real hair, with a metallic quality to give it a more doll-like look. When animating her movements, they made sure her eyelids would bob very slightly up and down, like a doll would that has closing eyelids. These are small pieces of animation that could go unnoticed since it feels so natural on a doll, but make all the difference in making Gabby Gabby feel like a toy versus a girl.

LIGHTING — To create a sequence in Disney and Pixar’s “Toy Story 4,” the lighting department is responsible for lighting the scene in a way that supports the story—in this case, using shadow and color to help convey the tone of the sequence as it progresses from uncertain to mildly menacing. Directed by Josh Cooley, “Toy Story 4” opens in U.S. theaters on June 21, 2019. ©2019 Disney/Pixar. All Rights Reserved.

We meet Duke Caboom, Benson, and Gabby Gabby in Second Chance Antiques, an antique mall where much of the action of Toy Story 4 happens. The antique store is filled with items of different sizes and materials, and also contains lots of little details for accuracy like dust and cobwebs. This set in Toy Story 4 was so complex, that it was actually considered the most challenging to create in all of Pixar history by many of the animators. The store was made with a scale of 8,000 square feet in mind, and about 10,000 objects within the store. This setting is where most of Toy Story 4‘s Easter eggs can be found. In fact, there’s at least one Easter egg from every single Pixar movie within Second Chance Antiques.

It took the team at Pixar nearly two years to create the store’s setting due to all the different levels of props on its shelves. To do research for the film they went to numerous antique malls, and took photos both inside out outside of the buildings to be able to accurately animate it from the inside out. Since there are so many individual “neighborhoods” within the antique mall, Pixar set dressers took on individual neighborhoods that they were each responsible for, then combined them altogether for the final set. To help make the cobwebs look realistic and not over-the-stop, they developed a special computer program that contained artificial spiders that were programmed to weave webs in a way an actual spider would. How incredible is that? 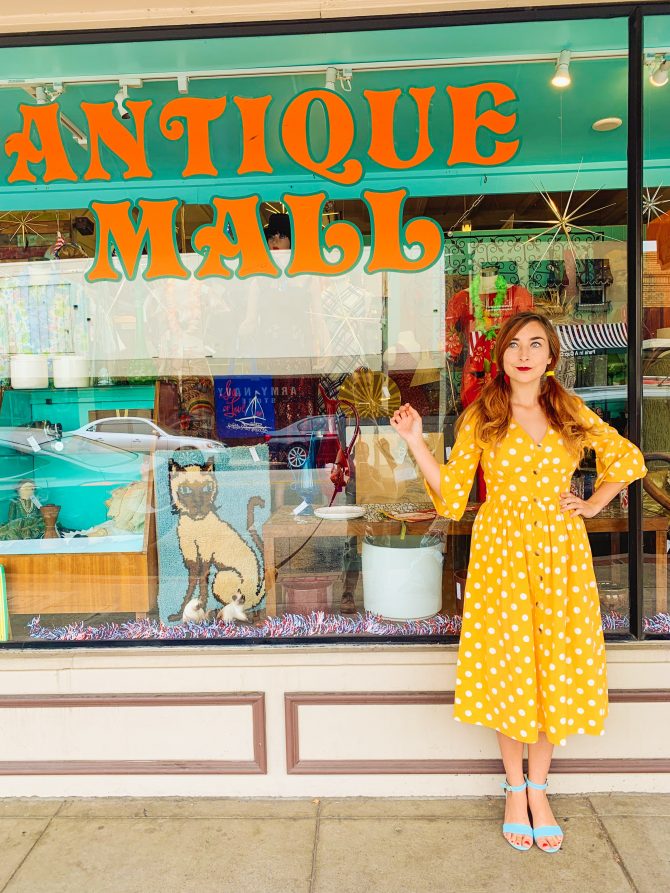 When I was a kid, I absolutely loved going antiquing! It was exciting to explore a massive store and see items from the past, and there was always something new and unexpected around each corner. Now having seen Toy Story 4 twice, I was inspired to go antiquing for the first time in a few years! I honestly think that this movie will help rekindle a love for antiquing for people like me, or inspire people to try it for the first time! I went to the Orange Circle, an area of Orange County, CA that has a lot of antique stores. It’s where I used to go frequently growing up! Going into a few of the antique malls, it was making me think about how amazingly accurate Second Chance Antiques is in Toy Story 4. 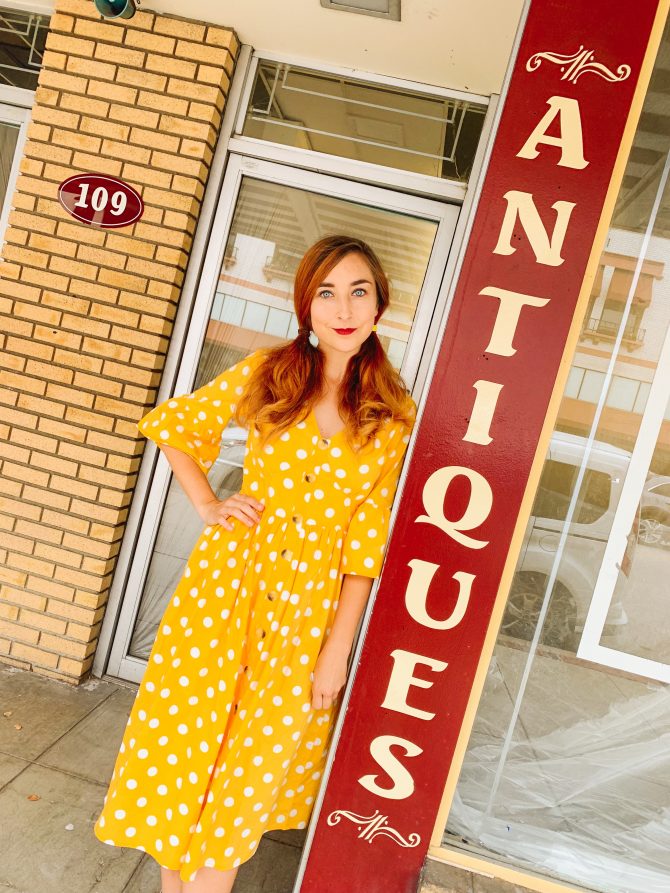 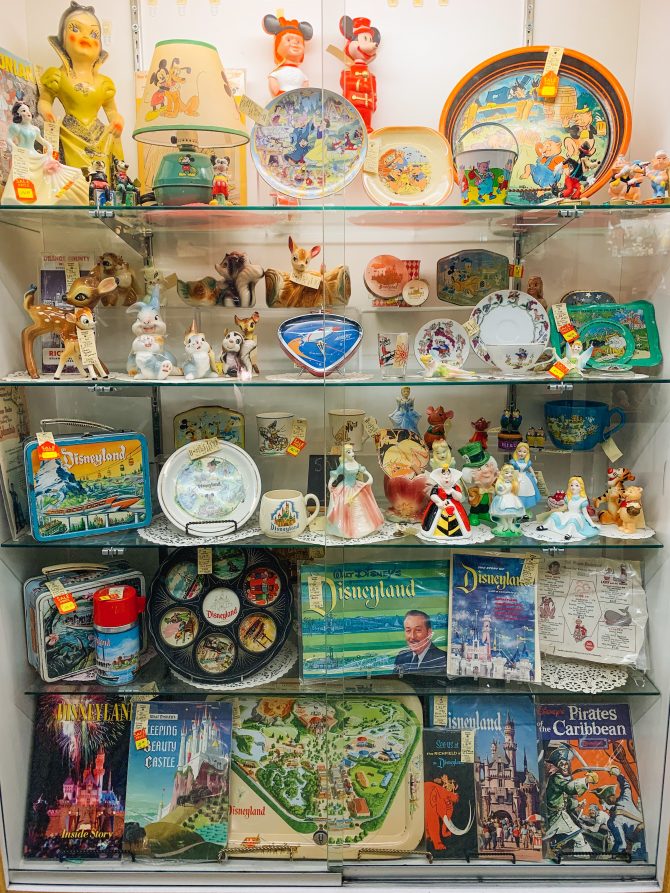 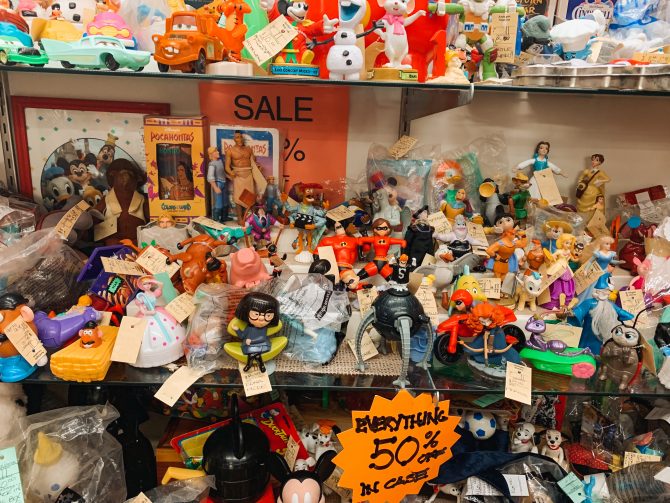 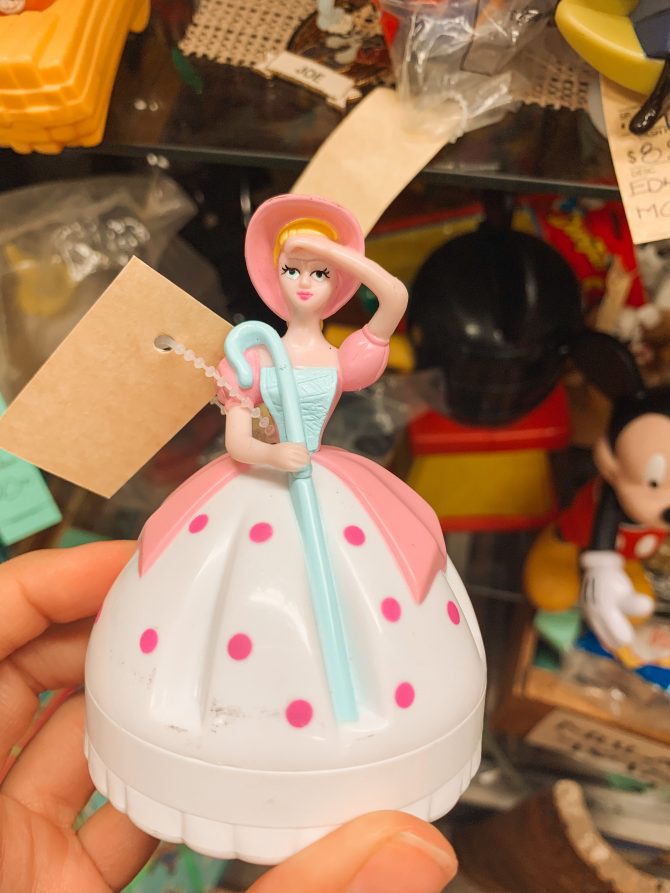 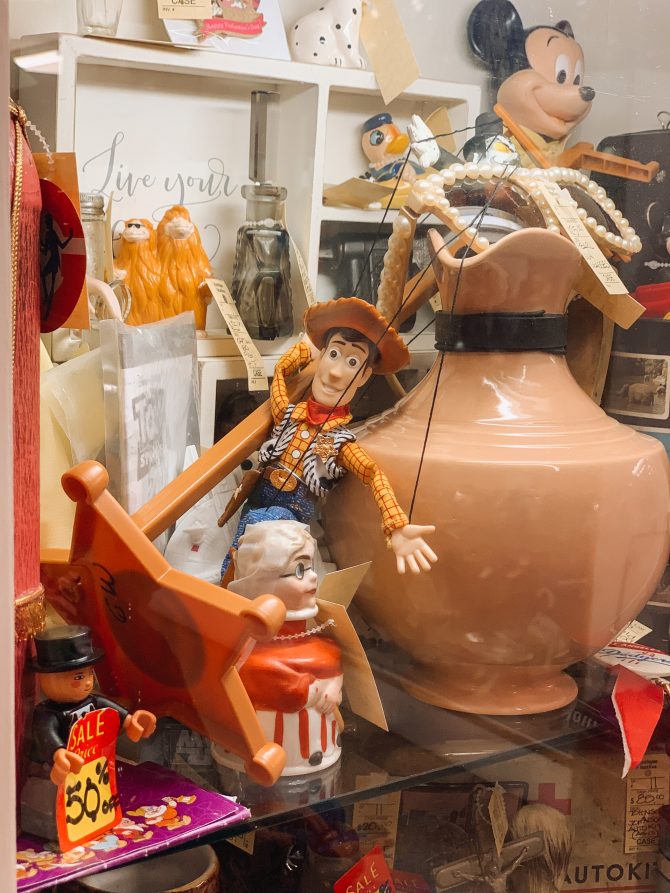 To go antiquing, I did a Disneybound of Gabby Gabby, and specifically was on the lookout for any fun Disney items. Let me tell you, antiquing in Orange County is quite the treat for a Disney fan. Being so close to Disneyland’s home in Anaheim, CA there tends to be a lot of Disney items. Aside from vintage Disneyland souvenirs, I found quite a lot of items from Toy Story and Toy Story 2! A few of them being toys and Happy Meal toys I know that I had! I am always a fan of using Disney and Pixar movies as inspiration for going out in the world and trying new things or doing fun activities. It was fun to go antiquing with my daughter for the first time, all inspired by the amazing set and characters Pixar created for Toy Story 4! 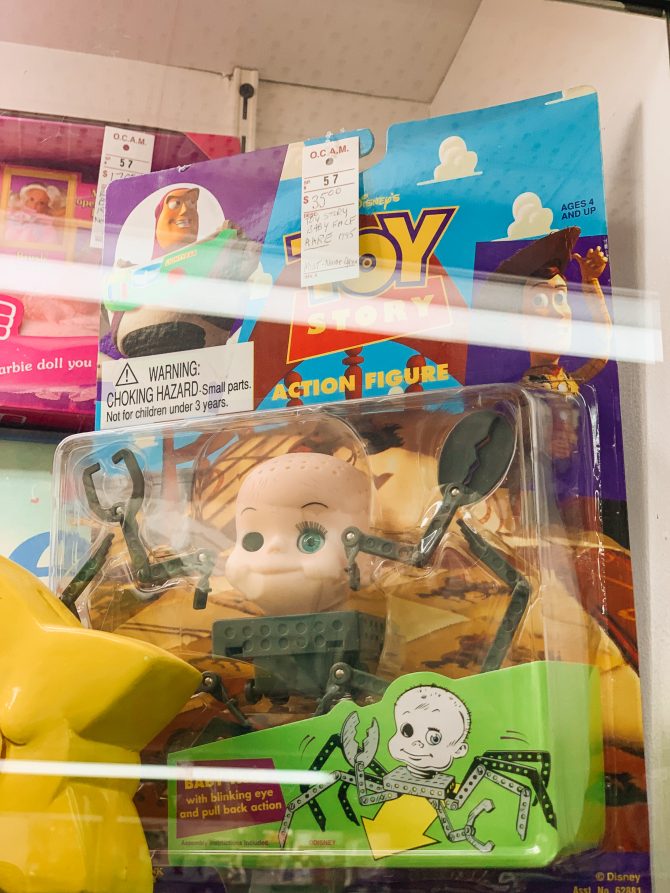 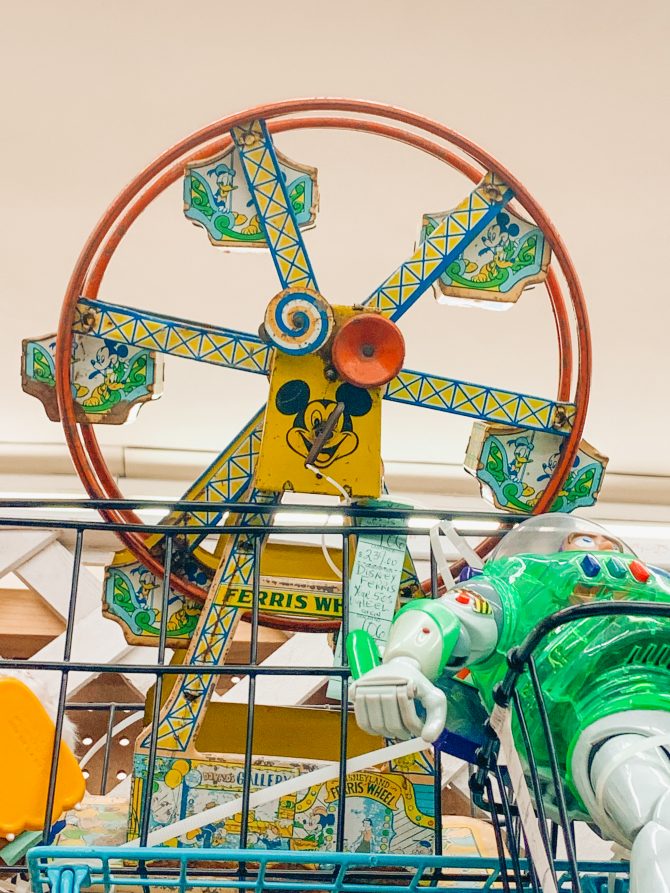 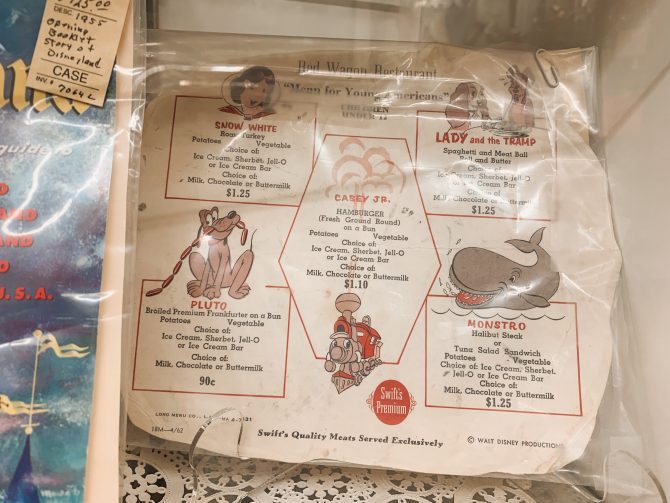 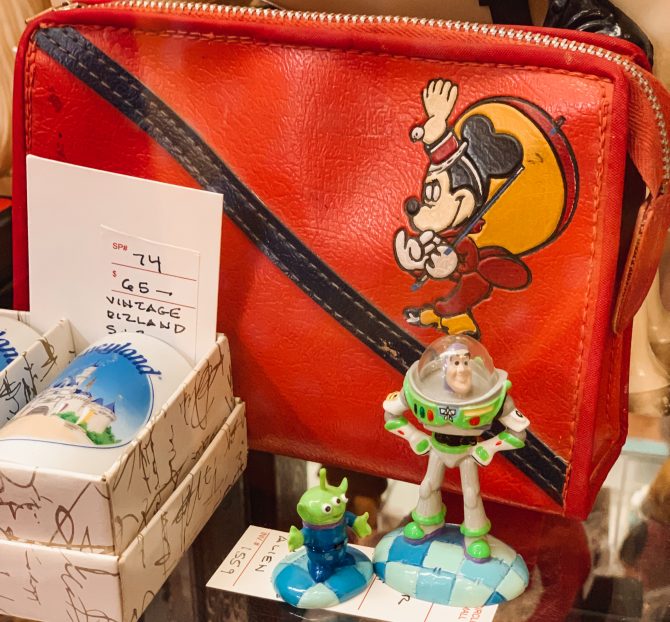 Toy Story 4 is coming to theatres on June 21st. You can read my spoiler-free review, as well as what my 4-year-old thought of the movie here.