I learned so many amazing things about creating the beloved Toy Story films when I visited Pixar Animation Studios earlier this year! The first panel we attended was with Production Designer Bob Pauley and Global Technology Supervisor Bill Reeves. Both of them have an incredible Pixar legacy, having worked on the very first Toy Story film as well as Toy Story 4. Reeves and Pauley have both seen the drastic evolution of animation technology that has happened over the 24 year span of the films. 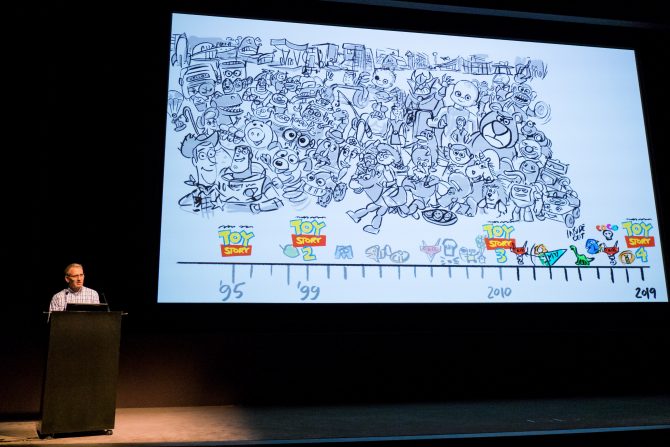 Over that 24 years, Pixar created twenty films, including four Toy Story films – that definitely shows how much audiences and the team at Pixar love these characters and want to keep seeing their stories! Now let’s journey back to where it all began with Toy Story, and look at it from the technology journey Pauley and Reeves showed us! 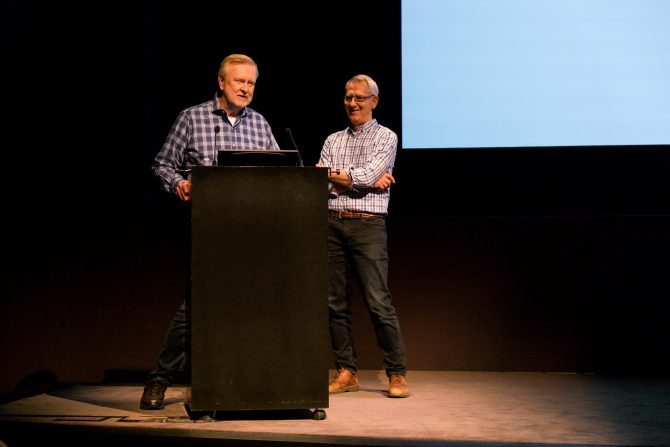 The first Toy Story was also the very first full length computer animated film, so of course there was a lot of work and experimenting along the way. To make visual effects and edit, Reeves recalls that the tech team (himself included) had to write codes for everything in plain text. Since this level of computer animation had never been done before, they had to create all codes from scratch, keep their fingers crossed, and hope that it worked well. At that time, the render system that they had couldn’t animated humans well but it did a good job of rendering plastic, which is how the decision to make their first full length film be about toys. At the time of the film’s production, they were working within a very tight time frame, budget, and limits with technology, so their film was crafted around those constraints. For the film, Pixar had about 129 employees, a crew of 129, and a render farm of 294.

Fast forward to four years later and two movies now under Pixar’s belt, and Toy Story 2 came out. In a short amount of time, the amount of Pixar employees jumped from 129 to 459 employees, a crew of 325 people, and a render farm of 672. It more than doubled in those four years – pretty impressive considering how relatively new full length computer animated films were! While having more people working on the film and more rendering capabilities, this film still had its own challenges since eight months before its theatrical release, the decision was made to change the director (to John Lasseter) and to change the story completely. With that, it meant most of the animation for the film had to be scrapped and completely redone. Toy Story 2 is my personal favorite Toy Story movie, so it seemed even with the eight month time constraint, and audience approval of the continuation of the Toy Story movies, it worked out!

Now we take an even longer time hop to eleven years later in 2010, and seven more Pixar films in between Toy Story 2 and 3. In between this time, there had been massive changes in how animation was done, and now had 1,236 Pixar employees, a crew of 400 people on this film, and a render farm of 4000. Talk about an immense change! This was all the first Toy Story film to be animated at the current state-of-the-art Pixar Animation Studios in Emeryville, CA that I visited. Since there was such a big leap in technology, a lot of the established Toy Story characters had to be re-rigged since their rigging was outdated. Audiences will also notice a lot more details to the characters, since at this point Pixar had a well established effects department, and a render farm that grew more than 13 times its original size since the first film. 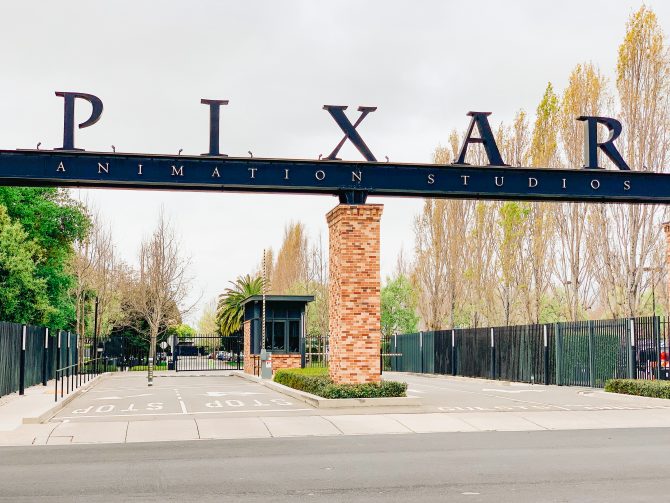 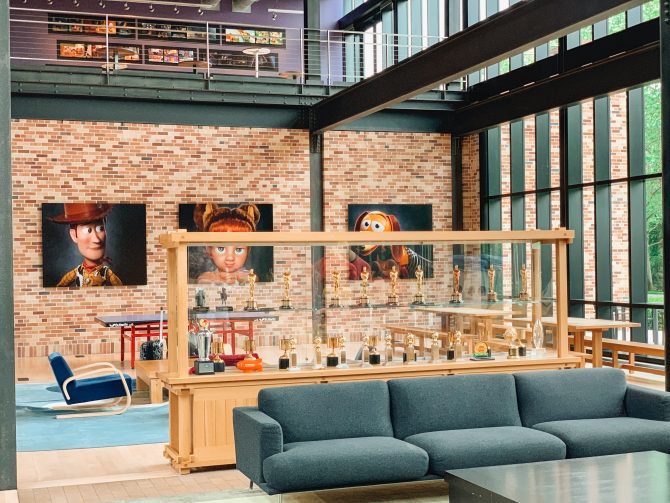 That now brings us to the most recent Pixar film, Toy Story 4, with a nine year gap since Toy Story 3. They now have 1,247 employees, a crew of 475, and a render farm of 5,500. It was fascinating to hear how Pixar’s capabilities keep growing every single year. I remember when Toy Story 3 came out, I thought that was their peak and couldn’t imagine a Pixar film to be more detailed than that! After seeing Toy Story 4, I was once again blown away by the level of detail to every piece of the film. It is the first Toy Story film to be made in widescreen, and with more advances in their lighting system they were able to give their characters more complex emotions and subtleties.

Here you can see the drastic differences in detail between the original Toy Story and Toy Story 4 ©2019 Disney/Pixar. All Rights Reserved.

While this film also adds more texture and details, the added stylization is there to keep the story true to it’s characters first and foremost. The reason these movies are always so loved by audiences around the world is because Pixar doesn’t just create new movies to show what they can do with their current technology, but rather they focus on the story they want to tell, and use their tech to enhance that story. Bill Reeves left us with a quote about his job at Pixar that I loved:

“Limitations become design challenges. Use the tools you have to tell the story.” 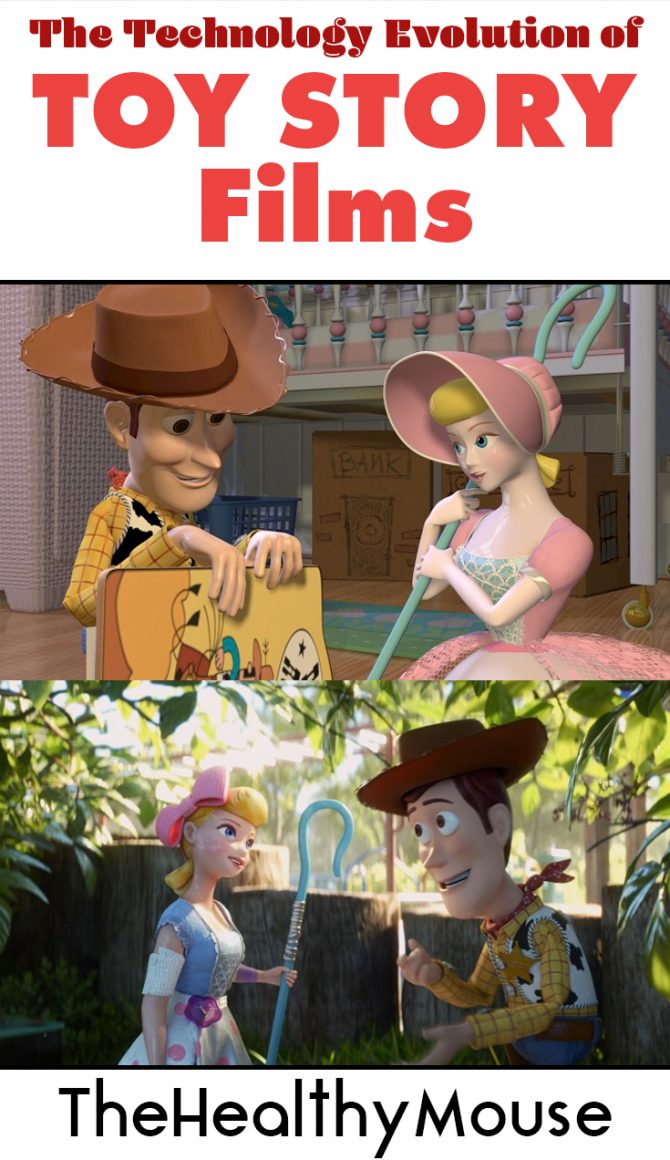