Star Wars: The Last Jedi Interviews – Learn How This Star Wars Differs From the Rest

Hi, everyone! My name is Melanie Gable and I’m guest writing for The Healthy Mouse to tell you about the truly awesome press conference I attended for “Star Wars: The Last Jedi.” Jessica was going to be out of town during the event, so she asked me to attend in her place and it was truly a dream come true! I saw nearly the entire main cast of the film in person, rubbed elbows with Praetorian Guards, and even got to have a conversation with the real BB-8! 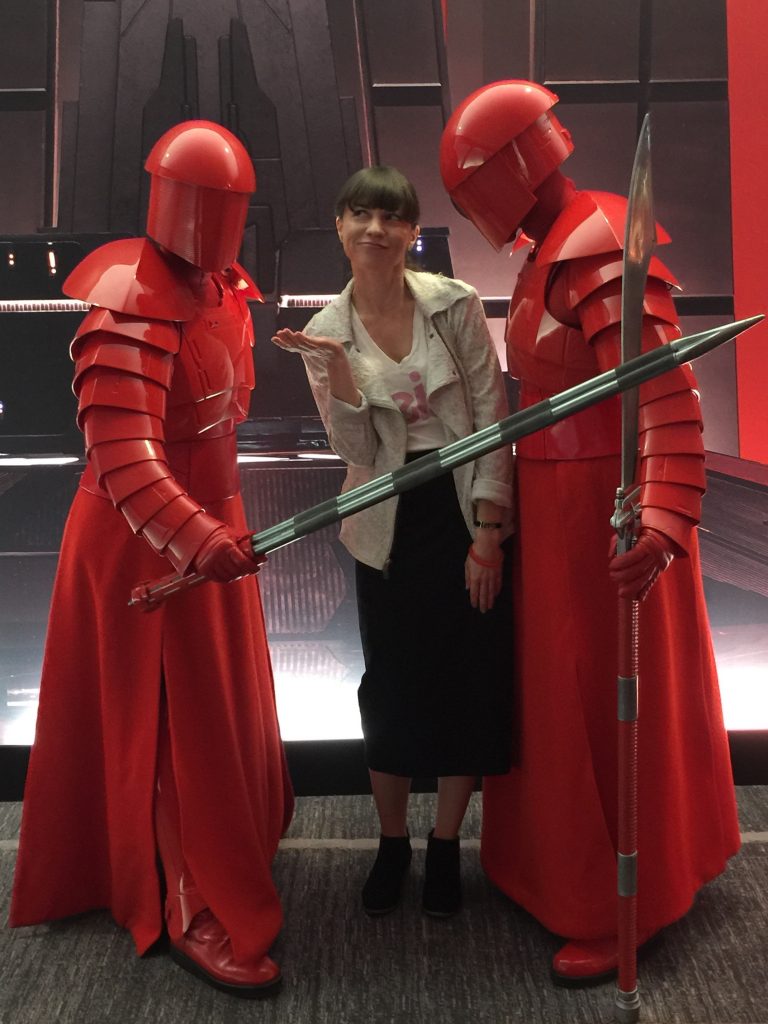 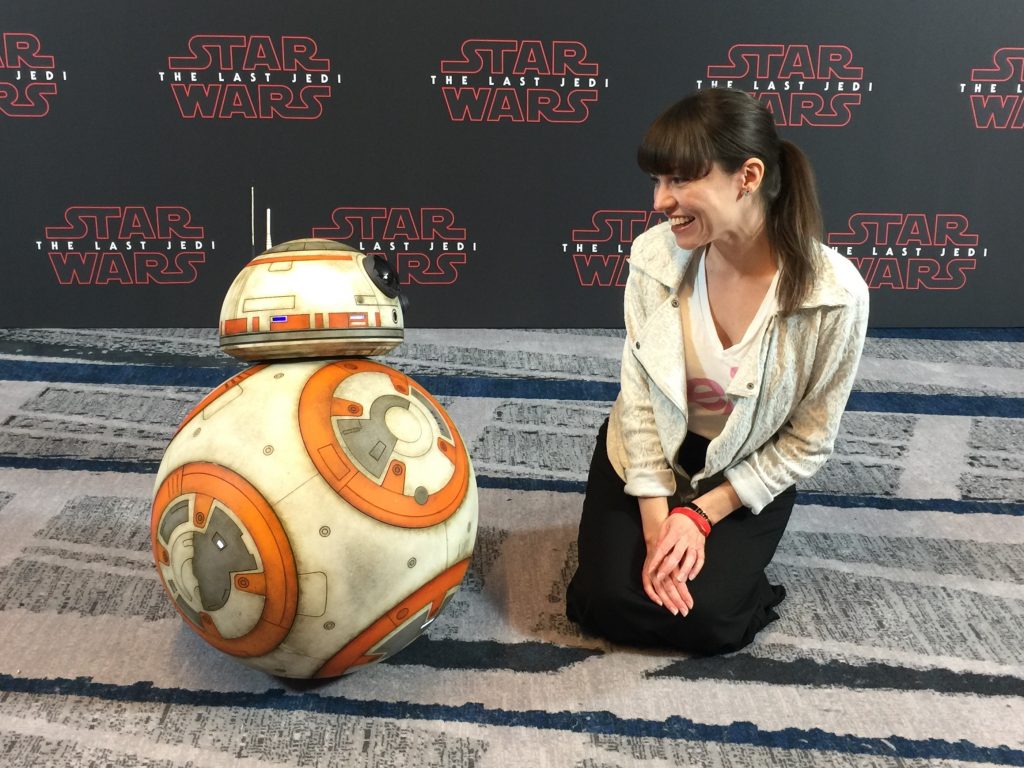 First, a bit about the film…

In Lucasfilm’s “Star Wars: The Last Jedi,” the Skywalker saga continues as the heroes of “The Force Awakens” join the galactic legends in an epic adventure that unlocks age-old mysteries of the Force and shocking revelations of the past.    The film stars veteran “Star Wars” actors Mark Hamill, Carrie Fisher (in her last role before her sudden passing last year), and Anthony Daniels, along with the next generation of “Star Wars” stars, including Daisy Ridley, Adam Driver, John Boyega, Oscar Isaac, Lupita Nyong’o, Andy Serkis, Domhnall Gleeson, Gwendoline Christie, Kelly Marie Tran, Laura Dern and Benicio Del Toro. “Star Wars: The Last Jedi” is written and directed by Rian Johnson, known primarily for indie favorites “Brick” and “Looper.”
Being a huge “Star Wars” fan and knowing which actors were going to be in attendance, I couldn’t wait to get to the event on the morning of December 3rd. I sailed down the freeway from Orange County to downtown Los Angeles, full of caffeine, adrenaline, excitement, and possibly the Force. When I checked in I was given a swag bag stuffed with Hasbro “Star Wars” toys, including a Finn action figure from the Black Series and a Mighty Muggs Darth Vader. Fun! 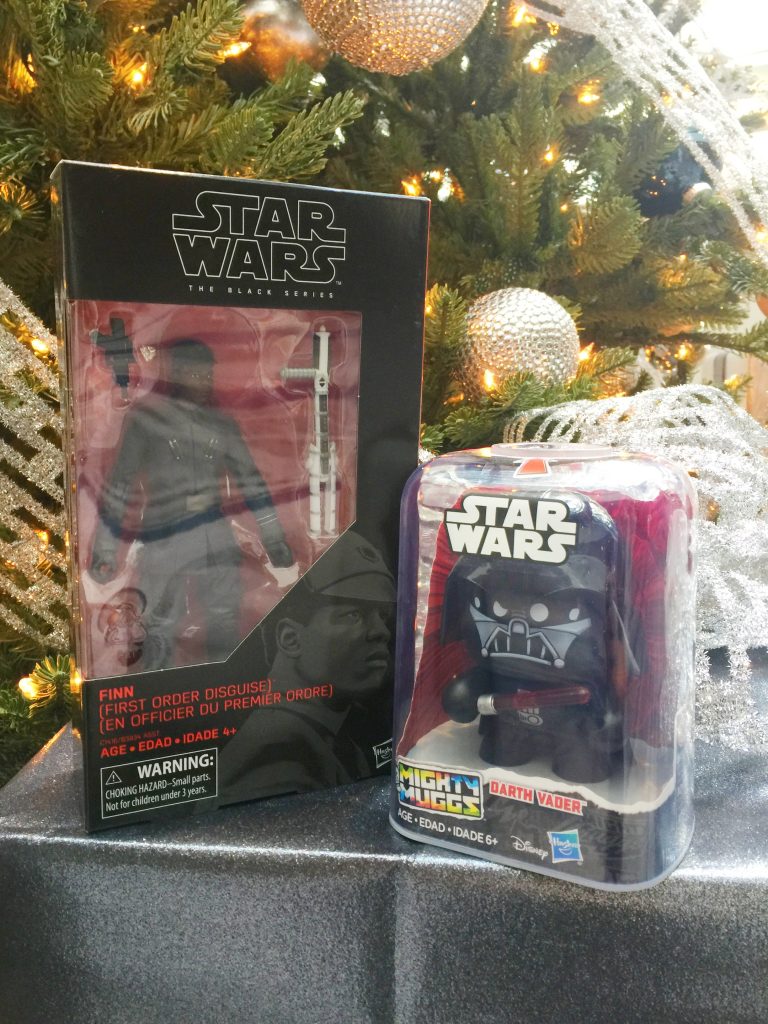 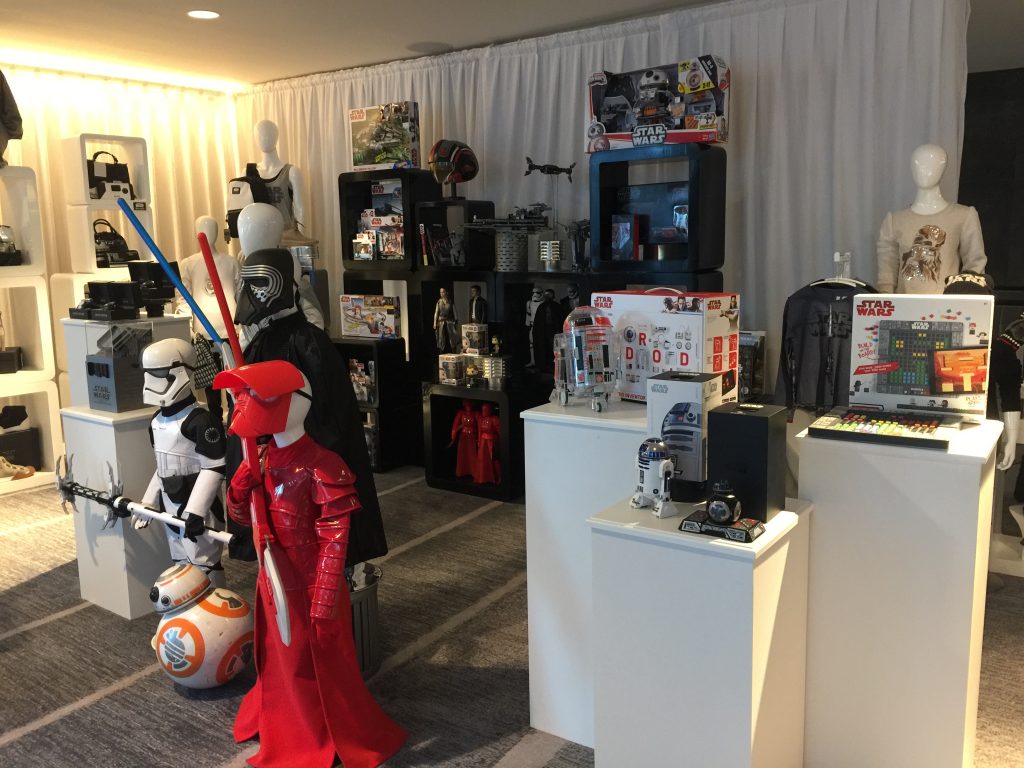 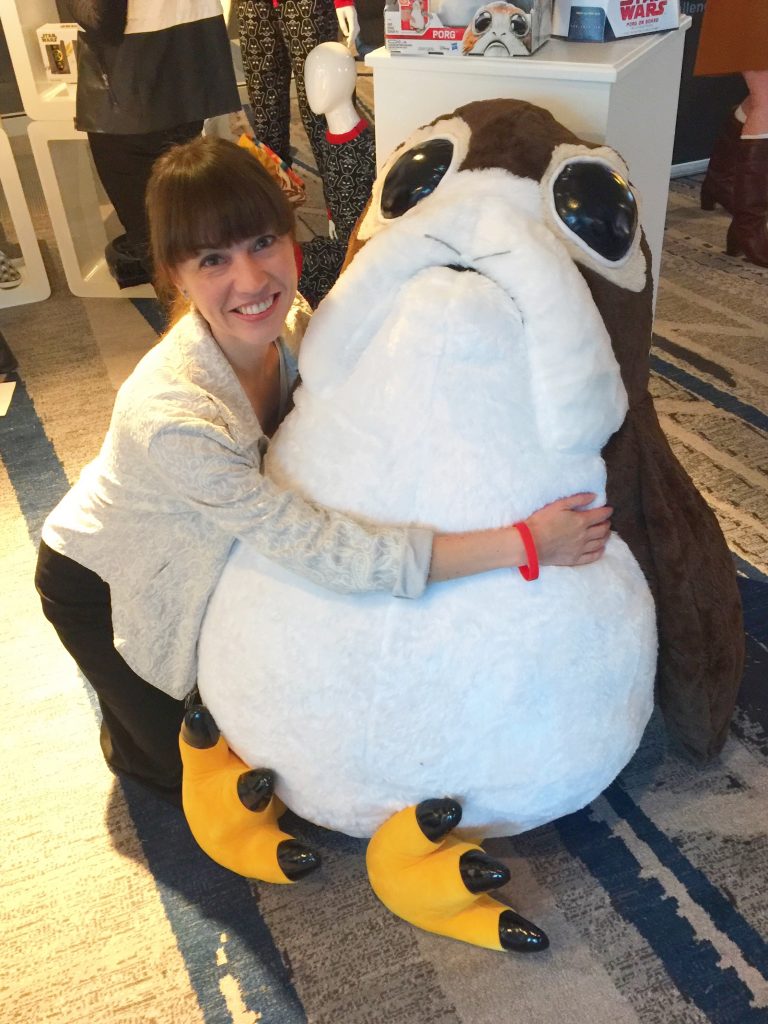 Many of us had arrived early, so we were invited to check out the media area upstairs, which was going to be open after the press conference as well. We were treated to eye candy wherever we looked, including costumes from “The Last Jedi” worn by Daisy Ridley (Rey), Adam Driver (Kylo Ren), Mark Hamill (Luke Skywalker, of course), and Carrie Fisher (That’s GENERAL Leia to you!). Disney Consumer Products had a display along one entire wall showing new and upcoming “Star Wars” products with everything from books to LEGO sets to designer clothing to an absolutely enormous and extremely huggable Porg plush. I also tested out Lenovo’s new “Star Wars Jedi Challenges” smartphone activated VR game, which literally puts a lightsaber in your hand and has you battling opponents such as Darth Maul. 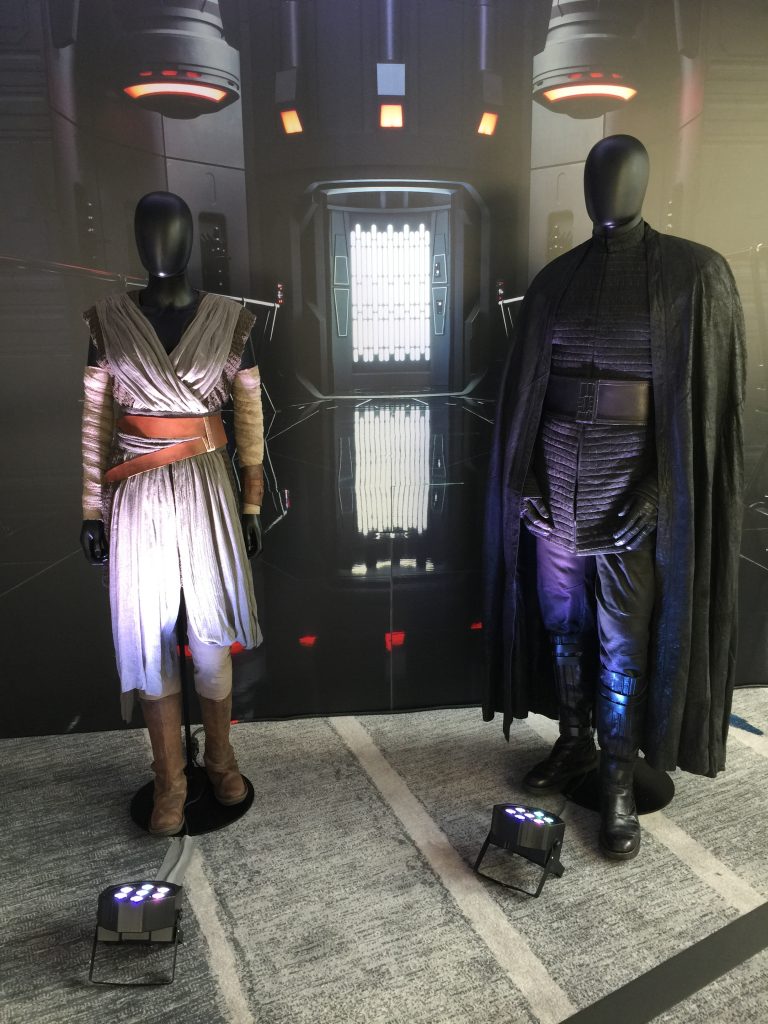 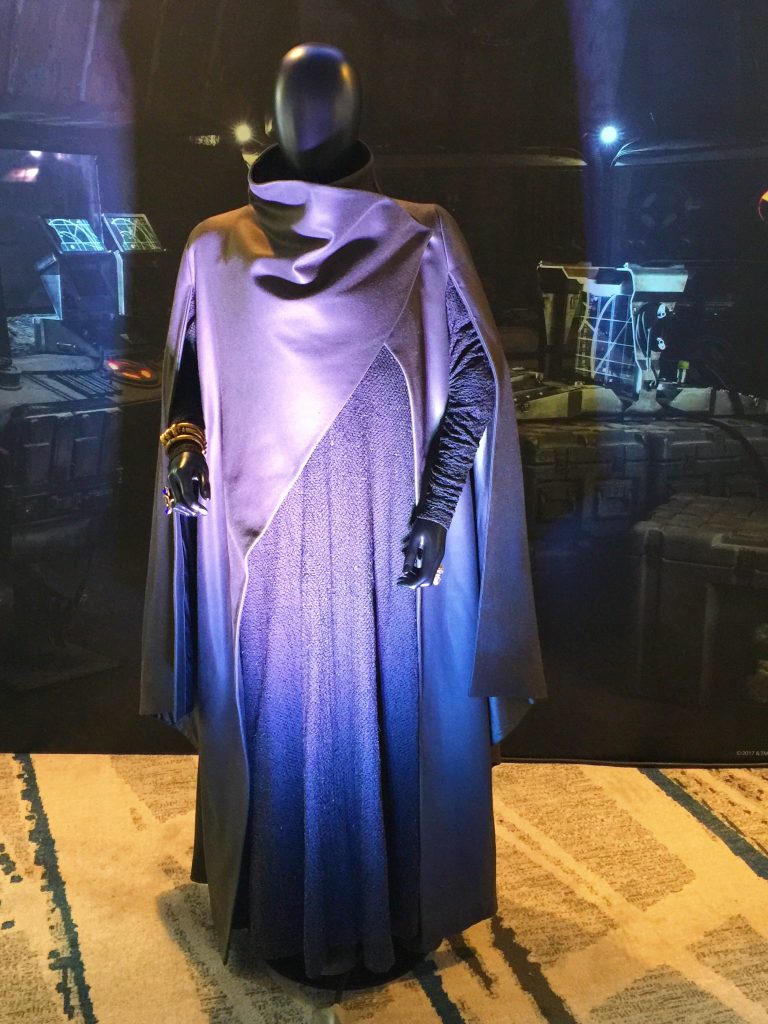 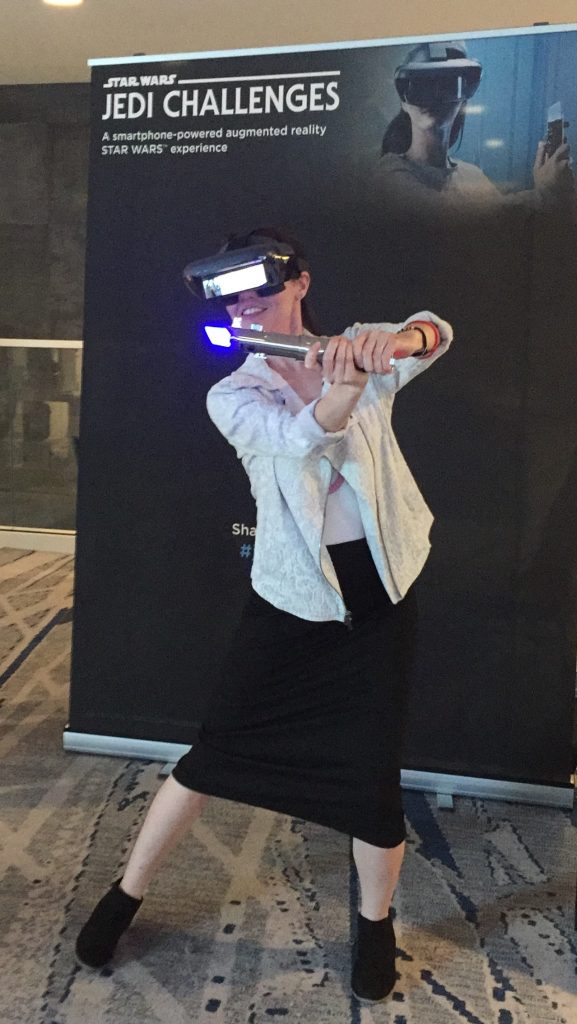 Making my way through the media area, I was able to rest from my Jedi battle in the Movies Anywhere Lounge, then check out the work of some creative kids who recently won a Littlebits contest using their Droid Inventor Kits. (And two thumbs up to Littlebits for featuring a young girl on their marketing poster! Girls love inventing and building, too!) I perused some incredible concept art for Disneyland’s new “Star Wars” themed land, Galaxy’s Edge, and enjoyed the gallery wall covered in black-and-white photos taken by “The Last Jedi” director Rian Johnson during the shooting of the film. 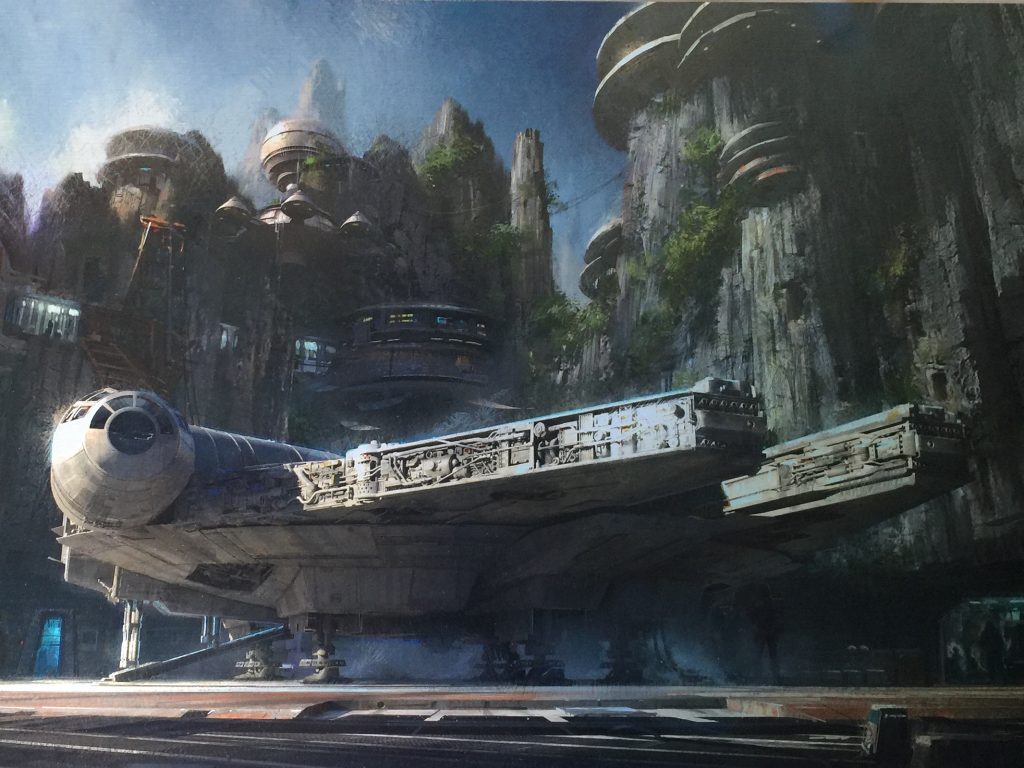 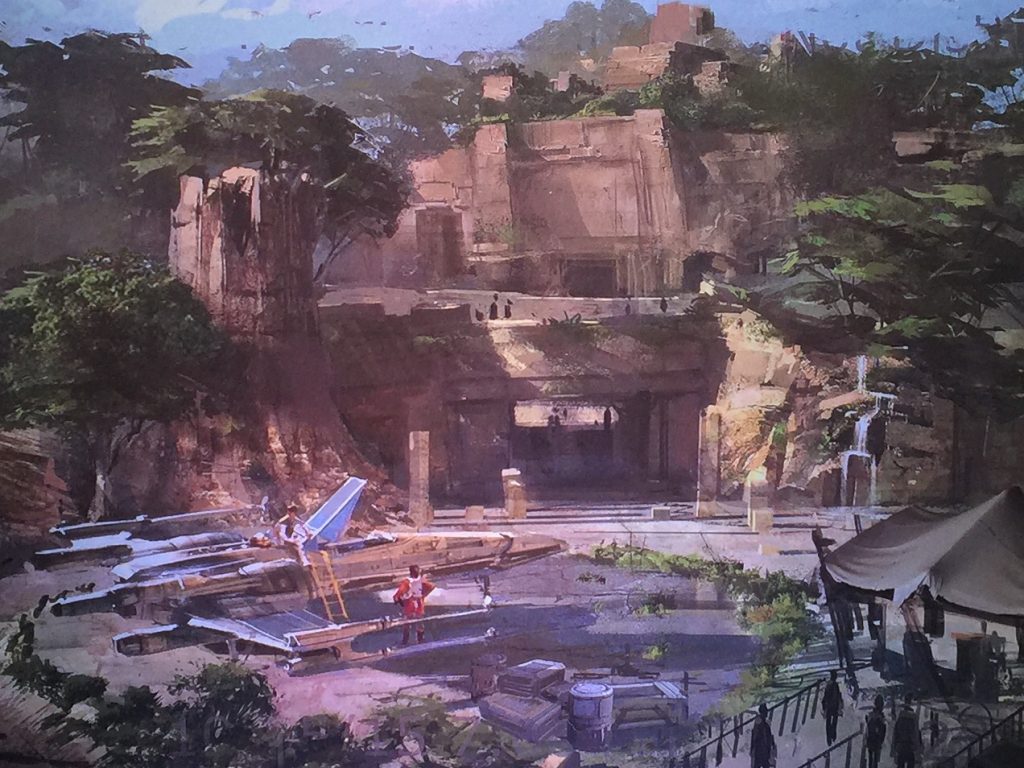 The final room in the media area was decorated to look like the inside of a starship, complete with the type of vertical lighting any major “Star Wars” fan would recognize from the production design in the original trilogy. We were treated to breakfast and photo ops in the cool space, then we were brought downstairs to begin the press conference.
After claiming a seat toward the back of the room, I snagged some pictures of the stage before the conference began. I was sitting on an inner aisle seat, and as the lights in the room dimmed I realized the cast was going to be ushered RIGHT PAST ME on their way to the stage. I literally could have reached out to touch them! (But I obviously wouldn’t do that, both because it’s creepy and because I would have been kicked out. LOL.) Flanked by Praetorian Guards, in case any of us tried anything funny, Johnson and the cast made their way to the stage and every nerd and geek in the audience (including me) managed to control themselves and stay in their seats. Cast in attendance included Hamill, Ridley, Driver, Oscar Isaac (Poe Dameron), John Boyega (Finn), Kelly Marie Tran (Rose Tico), Laura Dern (Vice Admiral Holdo), Domhnall Gleeson (General Hux), Gwendoline Christie (Captain Phasma), and Andy Serkis (Supreme Leader Snoke). You’d better believe I was extremely starstruck! 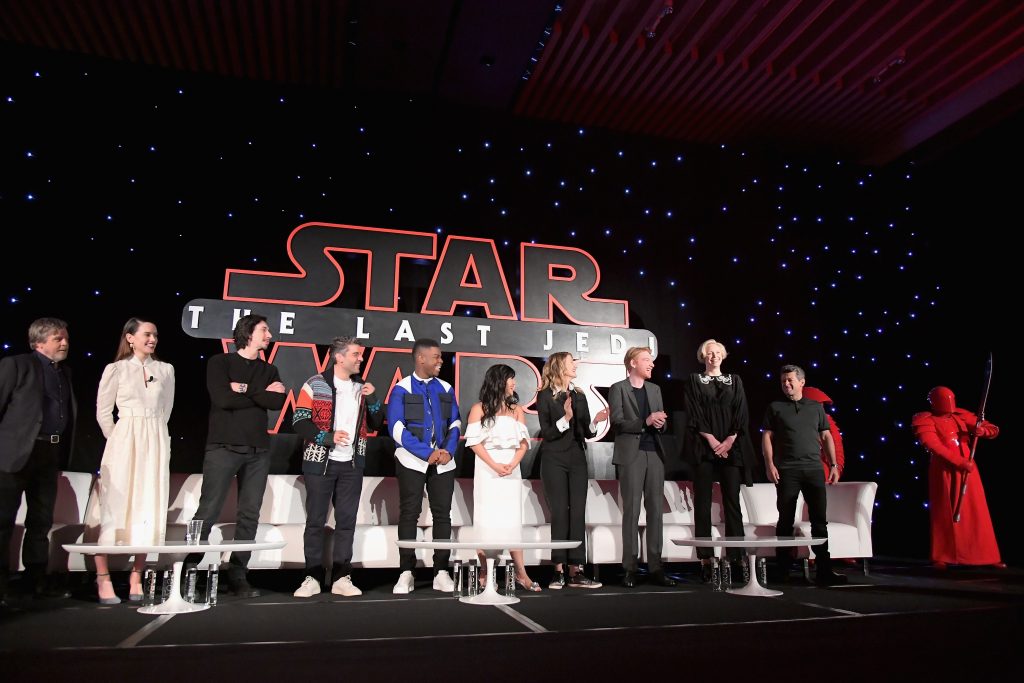 The discussion was moderated with humor and sensitivity by Entertainment Weekly writer Anthony Breznican. Breznican asked about the tone of the movie, which Johnson addressed, saying, “First and foremost we were trying to make it feel like a ‘Star Wars’ movie. And that means you have the intensity and you’ve got the opera, but it also means that it makes you come out of the theater wanting to run in your backyard, grab your spaceship toys and make them fly around, you know, and that’s a key ingredient to it. So we’re going to go to some intense places in the movie but I hope also it’s fun, it’s funny.”
Several of the cast members mentioned feeling that the filmmaking process had more of an “intimate,” character-driven feel than one would expect from a “Star Wars” movie, almost like making an independent film. The cast also talked about the relatable theme in the film of struggling with the darkness in oneself, what it looks like when you give in to it and what happens when you fight against it. And Hamill emphasized that one of his lines in the film can also describe the movie: “This is not going to go the way you think.” 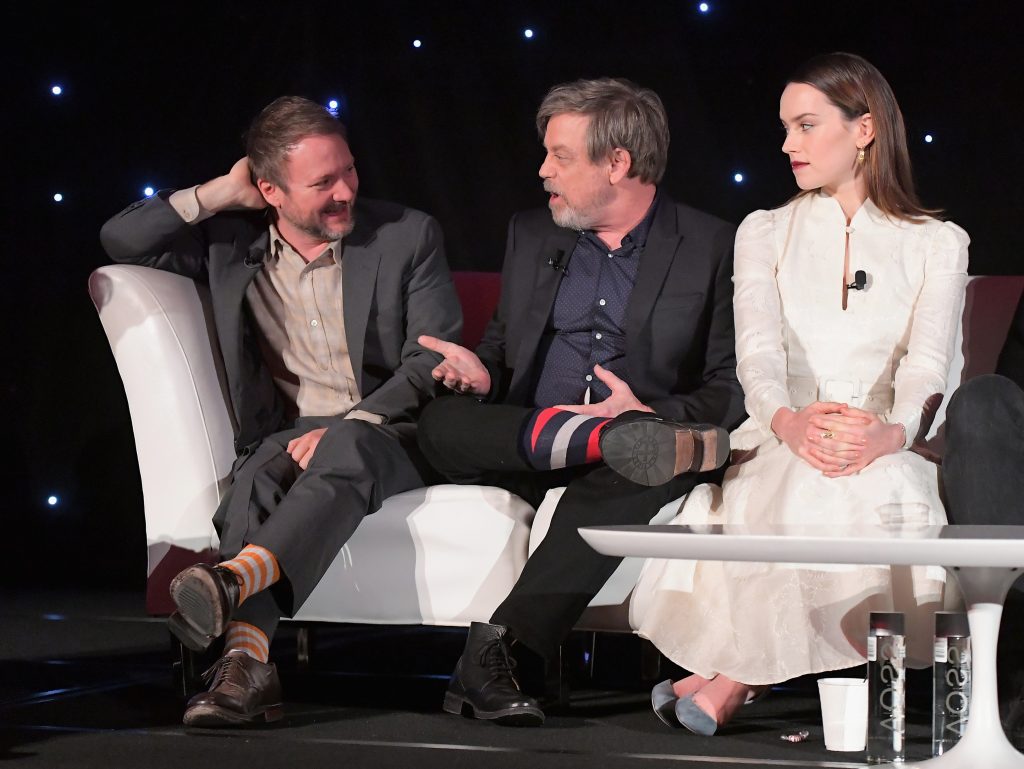 And the panel discussion, of course, had to turn to discussing the strong women inhabiting the world of “Star Wars,” starting with Carrie Fisher (whose presence was deeply missed) as Princess Leia, and moving on through Rey, Captain Phasma, and the newest characters, Vice Admiral Holdo and Rose Tico, who are valued in that galaxy not for their physical beauty, but for their skills, intelligence, bravery and leadership. Both Dern and Christie discussed being deeply influenced by Leia as children, and being honored to portray such complex female characters in the film. 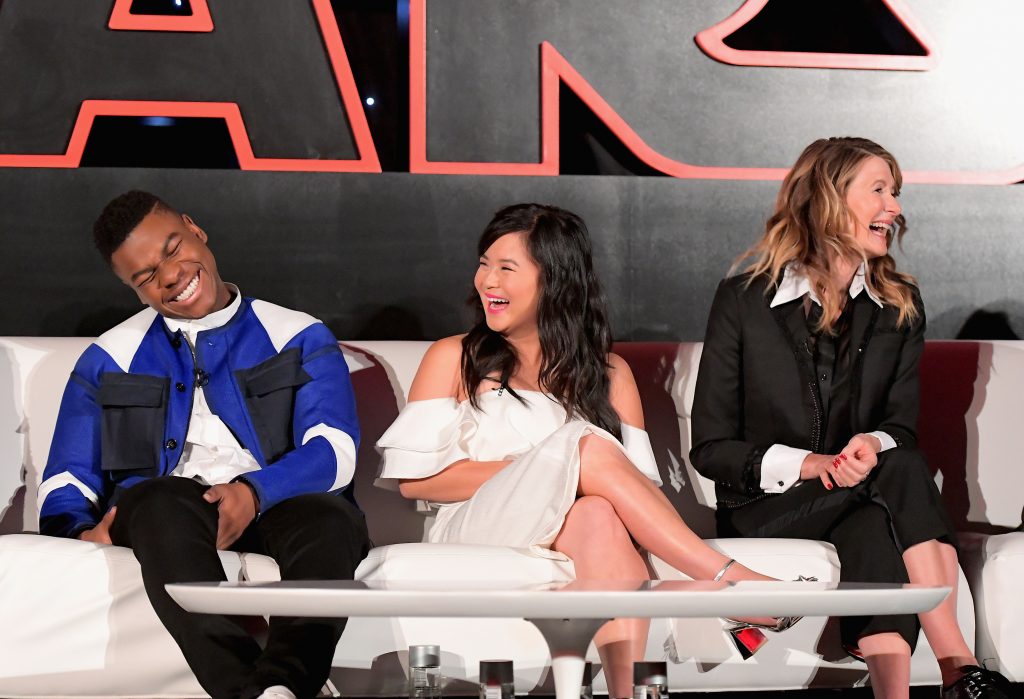 And, above all, director Johnson and cast emphasized that “The Last Jedi” digs even deeper, with humor and heart, into the psyches of these characters, the messiness of war, and how we react to grief when we lose those we love. 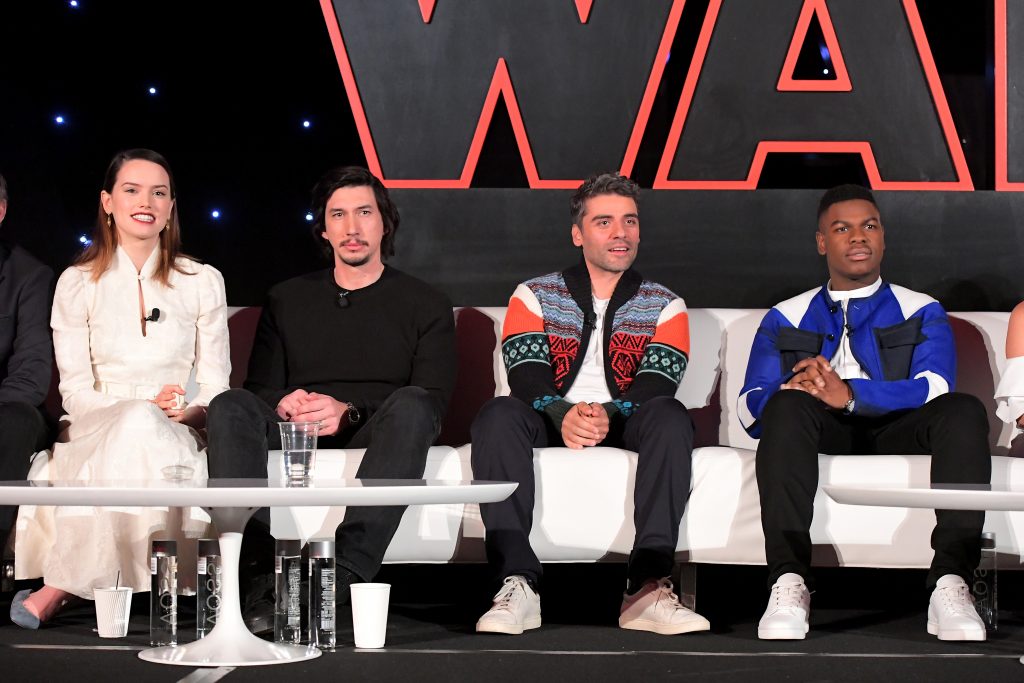 After the funny and insightful conference, I was able to enjoy the media area once again, and even have my own custom t-shirt screen-printed on site with a lovable little Porg! There were also photo ops with unexpectedly congenial Praetorian Guards and delicious Ample Hills “The Last Jedi” inspired ice cream flavors to enjoy. The highlight of the day, though, was having the extreme privilege of meeting the utterly charming droid BB-8 and his rumored nemesis, BB-9E! Matt Denton and Neal Scanlan were among the droid experts on hand to make sure the BB units had what they needed, and I had to go back twice to get as much droid time as I could with these two feisty foes. Is it possible to be starstruck by droids? Because I definitely was.
“Star Wars: The Last Jedi” when it opens in U.S. theaters on December 15th! You can check out the spoiler-free review on The Healthy Mouse, and get tickets by clicking here.