It’s been 10 years since 2008’s Iron Man, a groundbreaking film that not only revitalized the comic book genre, but changed the way franchise films are made. It’s revolutionary idea was to create a shared universe film series, allowing characters from different films to co-mingle and team up. The first iteration of such a mashup was 2012’s The Avengers, a high anticipated venture to combine the stories of Iron Man, Captain America, Thor, and others into one story about Earth’s Mightiest Heroes. 10 years later, the stories have grown and evolved, and the universe has grown to include even more heroes. In many ways, these stories finally culminate in the latest release from Marvel Studios and the third film under The Avengers title: Avengers: Infinity War. 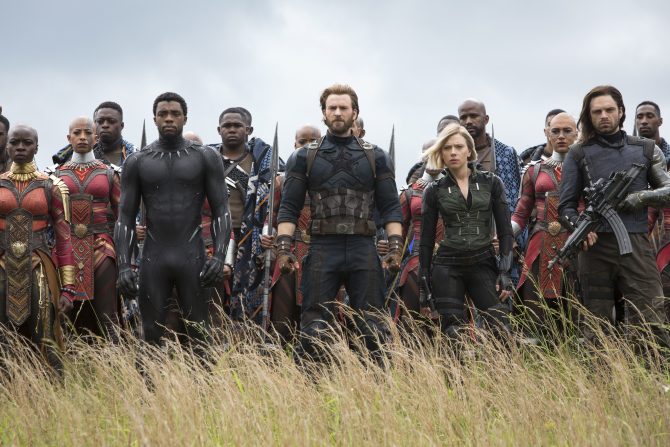 The film acts as a finale of sorts, bringing conclusion to an underlying story that has been present ever since the first Avengers movie regarding the mysterious Infinity Stones. Mentioned in passing in several Marvel Studios films prior, the Infinity Stones are sought-after sources of great power that control the elements of the universe. And no one wants them more than power-hungry warlord Thanos. He makes his intentions clear that with the power of all six Infinity Stones (housed within a specially made gauntlet) he will wipe out half of the living population of the universe in order to “cure” it and prevent the growing overpopulation he believes is plaguing existence. The Avengers are called back into service (after disbanding in 2016’s Captain America: Civil War) to take on the intergalactic threat, and, along the way, find allies in the Guardians of the Galaxy. Together, the superheroes of the universe team up to prevent Thanos from obtaining the six stones, even if it means their death. 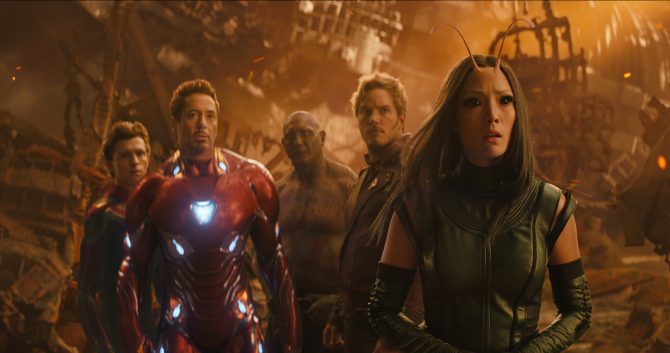 The film is an absolute thrill from the very start. If the film is a culmination of the films that came before it, it is fittingly structured as the third act in the overall story of the Marvel Cinematic Universe. The titular Infinity War starts in the very first scene and absolutely does not let up for the length of the feature. With so many characters from each individual franchise, the story is split up into several manageable subplots: Thor, aided by Guardians Rocket and Groot, goes on a quest to find a new weapon worthy of defeating Thanos; exiled Avengers Captain America, Black Widow, and the Falcon work to protect Vision, an android whose life force is powered by the Infinity Stone in his forehead; Iron Man, Spider-Man, and Dr. Strange find themselves aboard a space ship en route to Thanos’ home planet while guarding the Infinity Stone housed in Strange’s amulet; and the remaining Guardians of the Galaxy rush to collect the other Stones while Gamora prepares to confront Thanos, her adoptive father.

Similar to the challenges previous Avengers films had, Infinity War juggles many, many characters and storylines rather successfully. The character moments are given prudently throughout, with the main crux of the story belonging to Thanos (portrayed in motion capture by Josh Brolin), the last of his race, on a soul quest to fulfill what he believes is the balancing of existence. And what he is prepared to pay in order to succeed. Also getting a good share of character reflection is Tony Stark a.k.a. Iron Man (played by Robert Downey Jr.), considered by many to be the anchor of the whole franchise. This film pushes forward his character arc that began in The Avengers (and continued in nearly all his other appearances), which began Stark’s fear of failing at the hands of Thanos’ intergalactic threats. One of the film’s greatest moments comes when the two finally confront each other.

The film is truly an event, and an unprecedented one at that, and will have you leaving the theater still processing and thinking about the 10-year-long story told. Most of Marvel Studio’s films are shrouded in mystery; following Infinity War’s (currently untitled) follow-up next year, Marvel has yet to officially announce their future films. But the universe will undoubtedly continue to expand into galaxies and dimensions, and Marvel Studios will continue to push the bar of success higher and higher.

Avengers: Infinity War is now out in theaters, you can find tickets for the film here. You can also take a deeper look into the making-of the film by checking out the interviews with the cast and creators.