Disclosure: I was invited to attend the Spies in Disguise press junket and world premiere but all thoughts and opinions are my own.

Attending the Spies in Disguise Premiere & My Thoughts on the Film

I was recently invited by Disney to attend the Spies in Disguise press junket and the world premiere. If you were confused by that first sentence, it took me awhile to get used to it too! But Spies in Disguise is now under the Disney umbrella, since the animation studio Blue Sky Studios is owned by Fox and now Fox is part of Disney…it makes it a film that’s part of the Walt Disney Company. To be honest, this probably would be a movie I wouldn’t have seen if it weren’t for its relation to Disney, but being an animated film not originally created by Disney animators but under the company’s umbrella, it made me very curious and intrigued to watch it.

I went to Hollywood Boulevard, outside the El Capitan Theatre where all Disney premieres are held on a rainy night to walk the blue carpet for the world premiere. As I was walking the carpet, I head other fellow bloggers murmuring about how they weren’t sure what to expect either. From the trailers, it seemed very much like a film that would just appeal to young kids. The moment was there for the film to begin! It always feels exciting to be watching a film’s premiere inside the historic El Capitan Theatre. 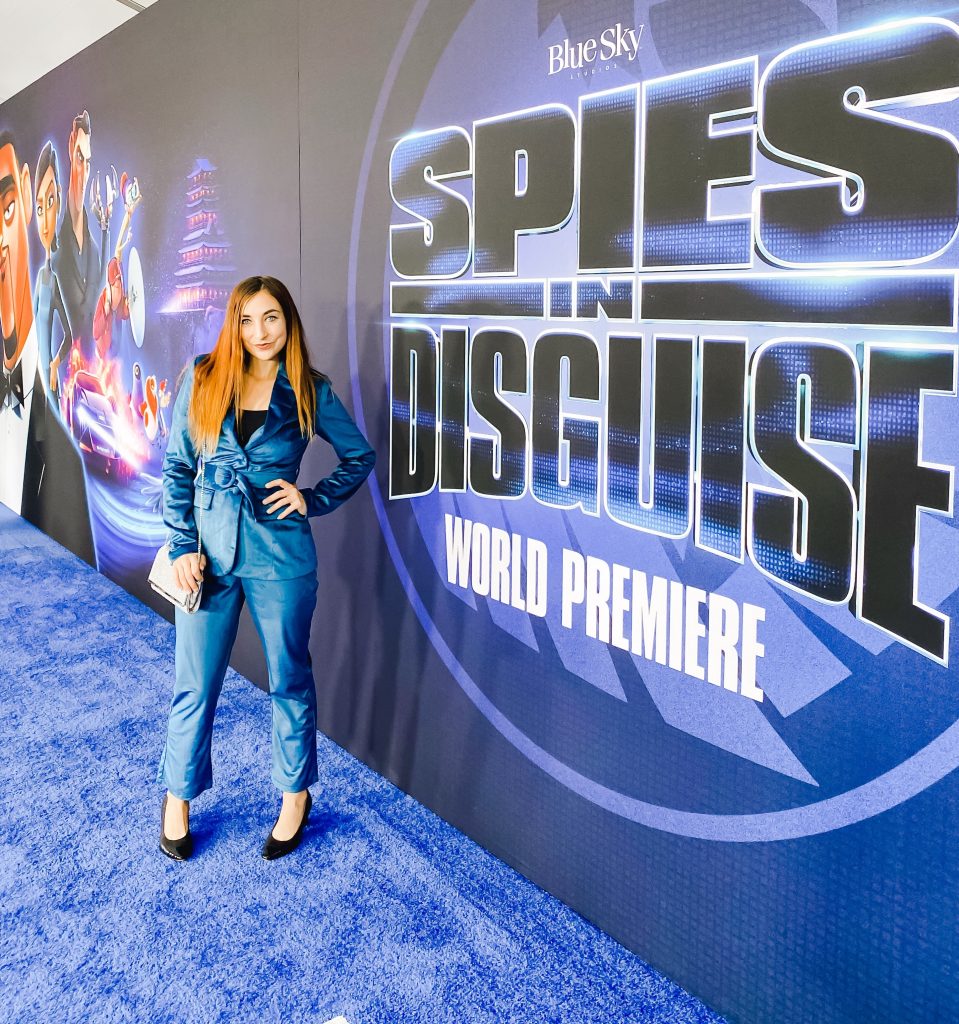 The buzz and excitement you feel with the filmmakers and stars of the film watching it alongside you is a feeling like no other! Tom Holland and Will Smith are the leads of the film, it was very special for two of my favorite actors to both be there in the theatre with us. As the lights went down and the film was about to begin, Will Smith even shouted “Tom Holland, you rock!” Which then led to the audience to burst into laughter and cheers (because come on, who wouldn’t agree with that statement?)

As I mentioned in the beginning of this post, I went in along with many of my fellow bloggers unsure if we would enjoy this film. We were all completely shocked at how good it was, and the friends I was with were all solo adults like myself, with no kids in tow! I truly can’t remember the last film I saw where I was laughing so much throughout the entire film. I went in thinking only young kids would like it, but I left thinking that not only would kids and adults like it, but adults may even like it a bit more since there’s a lot of jokes I think that the adult audience members would understand better. At the after party at the Roosevelt Hotel, my friends and I were talking about our favorite scenes, and laughing as we recalled some of our favorite bits.

It was one of the funniest movies I had seen in a long time. And I’m not talking about a dumb, slapstick funny. I’m talking a cleverly written, physical comedy, bromance type of funny. Tom Holland and Will Smith were perfectly cast as the film’s leading duo, and play off of each other very well. After watching Spies in Disguise, I left craving even more of that Smith/Holland bromance chemistry that they had! In fact, I already am in the works of making plans to see it again once it’s out in theatres Christmas day so my husband and daughter can also see it!

Interviews With the Directors and Actor Masi Oka 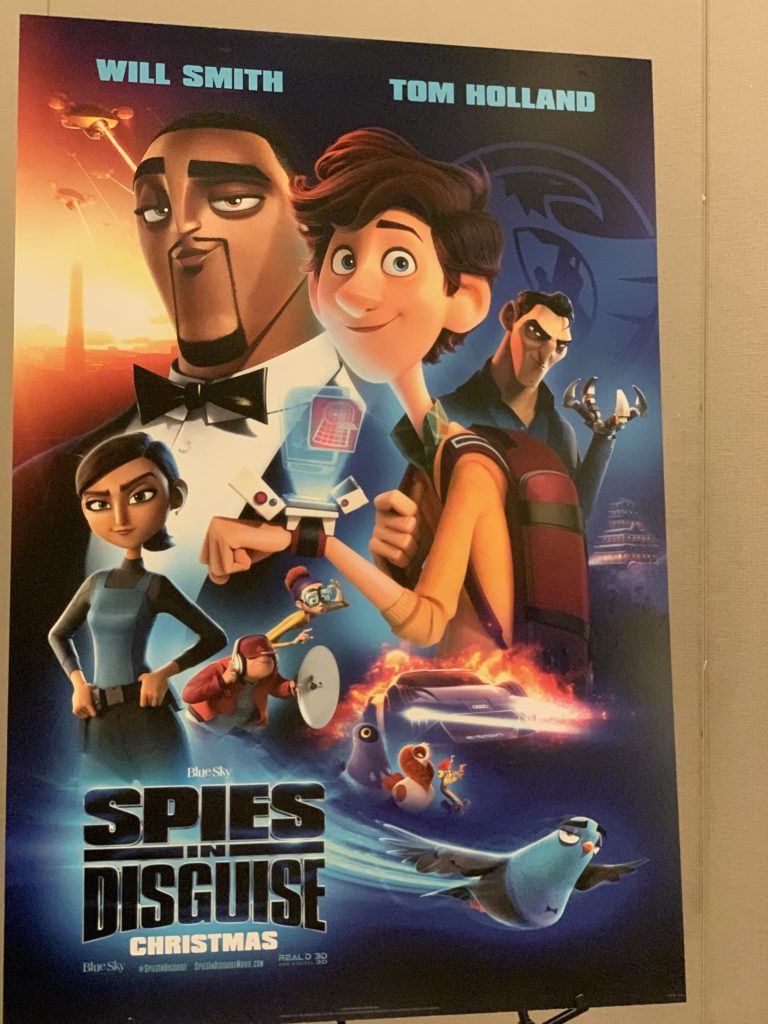 Earlier in the day prior to the premiere, I was able to attend press interviews with the film’s directors Nick Bruno and Troy Quane, along with actor Masi Oka who plays Kimura in the film. The directors had actually never met each other prior to working on this film, but said they got along really well and had a blast working together, saying just like in the film itself it was great to have a partner in crime during the making of the film.

Bruno and Quane described Spies in Disguise as being a bromantic comedy, with K-drama (Korean Drama films) infused into it. Before animation of the film began, the director duo pictured Will Smith as the role of suave spy Lance Sterling. They thought it was worth trying to get their dream casting choice, and fortunately were successful at doing so! They said what got Smith hooked into wanting to do the role of Lance Sterling was the message of the film, that coming together is what is going to save this world.

They said both Smith and Holland were collaborators in the truest sense, and were absolutely wonderful to work with. The animation process itself is very carefully storyboarded and planned out once the story and voice recording are complete, so the place for spontaneity in animation is in the recording booth. Bruno and Quane were beyond pleased with how Smith and Holland perfectly reacted off of one another, improvised, and brought that feeling of spontaneity and bromantic comedy humor alive on the screen.

We then interviewed actor Masi Oka, who plays the comedic villain Kimura, a character largely inspired by K-dramas. His character is someone who is really intimidating, big and strong, very different from the type of character he usually plays. For this, he said he deepened his voice and worked to channel his inner George Takei in the recording booth. He appreciated the opportunity to be able to represent a minority character authentically, and talked about how animation as a whole is making huge strides about casting actors who match the ethnicity of the character they’re portraying on screen.

Like I mentioned earlier, Oka emphasized how Spies in Disguise seems like a kid film but is truly for any age. Particularly perfect for Christmas time, since it’s a movie where people can get together and laugh with one another!

Spies in Disguise in Theatres Christmas

It was very interesting to say the least, to see this film as part of Disney. It is an animated film I may not have given a chance otherwise, but very much enjoyed. It had more physical humor and adult jokes I wouldn’t expect in a Walt Disney Animated film, definitely with a very different tone, yet with the same quality of storytelling you would expect from Disney. Spies in Disguise is in theatres Christmas day.