An Early Look at the Ralph Breaks the Internet Princess Scene

A few months ago, I had the experience of a lifetime for any Disney fan – an early look at Ralph Breaks the Internet! I headed to Walt Disney Animation Studios and saw sneak peeks of scenes from the Wreck-it-Ralph sequel, plus heard from the filmmakers about the making-of the upcoming movie! Although the movie still is a little less than a month away from being theatrically released, it already has established an iconic scene among fans: “The princess scene.” What most people refer to as “the princess scene” is a part of the film where Venelope stumbles upon the Oh My Disney part of the internet, where she meets every Disney princess (and a queen, because this includes Elsa!).

This scene has of course become iconic even before the film’s release, since it is so rare that we get to see beloved Disney characters from across different time periods interact with one another’s personality quirks. I feel we haven’t really gotten a scene with characters from different Disney films interacting so much with one another since Who Framed Roger Rabbit!

On press day, we sat down with art director Ami Thompson, head of animation Kira Lehtomaki, and co-writer Pamela Ribbon. Thompson had trained with Mark Henn (who is famously known as being the supervising animator of Belle, Ariel, Jasmine, and Tiana), so she was well-versed in princesses from working with Henn! Lehtomaki had previously worked on Bolt and Zootopia, as well as had some “princess training” working on Frozen, Tangled, and Moana. Pamela Ribbon talked with us about how this scene came to fruition. She had previously been a writer on Moana, and worked with John C. Reilly on Bears, leading her to work as co-writer for Ralph Breaks the Internet. The idea for “the princess scene” came about because Ribbon had always wondered why Venelope wasn’t part of the Disney Princess cannon. She thought it would be fun to play around with the idea of Venelope entering into the Disney Princess sphere. 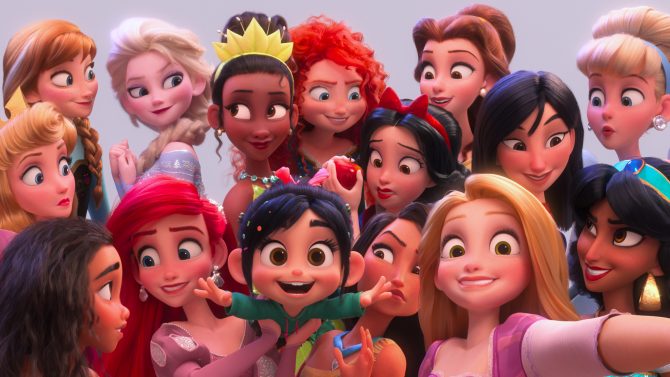 Another big reason for the princess scene? Well, the internet is very meta…so if you’re making a movie about the internet, you have to be meta of course! Ribbon thought the Disney Princess scene would be the perfect way to embrace that. She wrote a draft for the scene, not expecting it to get approved. To her surprise, not only did it get approved but the original draft she wrote ended up being almost exact to the final version of the princess scene, which very rarely happens in filmmaking. To make this scene even more of a dream for any Disney fan? Most of the princesses are voiced by the original voice actresses: 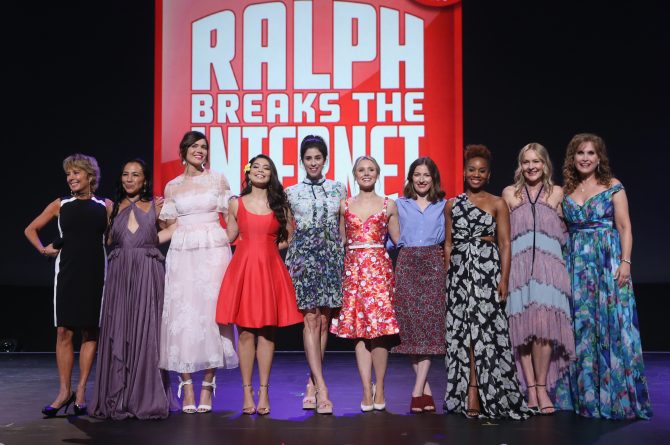 I can’t wait to see the scene in its entirety when Ralph Breaks the Internet (and I have a hunch will also break some box office records) November 21st!