What We Know So Far About Disney & Pixar Soul

Many Disney fans are well aware that the next Pixar film coming to theatres in Spring 2020 is Onward. But at D23 Expo, we learned more about their next feature film coming in November 20, 2020, called Soul. The film was originally to be released June 19, 2020 but due to productions being on pause and release schedules being completely rearrange Soul has moved to a November 20, 2020 release date. This was originally Raya and the Last Dragon’s release date slot, which is now being moved to March 12, 2021.

At D23 Expo, we learned more about the premise, who will be starring, and saw some clips. It got me pumped for this movie so quickly! We learned that Pixar’s Soul tells the story of a man who is a middle school music teacher, but feels he was meant to be a professional jazz musician. He feels that somewhere in the story of his life, something didn’t go right. An unexpected step sends him into cosmic realms. The film will dive into thinking about what makes you, YOU!

From the clips we saw, there seems to be a lot of jazz music incorporated in the film, my favorite genre of music! I loved seeing Pixar incorporate music into their films with Coco, so I’m glad they’re pursuing that route again. In addition, and most importantly, we are getting another Pixar film that has a black lead. I feel that we definitely need more Pixar movies that tell stories about women, and about people of color so was thrilled to hear that the lead character Joe Gardner will be played by Jamie Foxx, and another lead character, named 22 will be played by Tina Fey:

Also starring in the film is Questlove, Phylicia Rashad, Daveed Diggs. The music of the film will be done by Jon Batiste, Trent Reznor, and Atticus Ross. 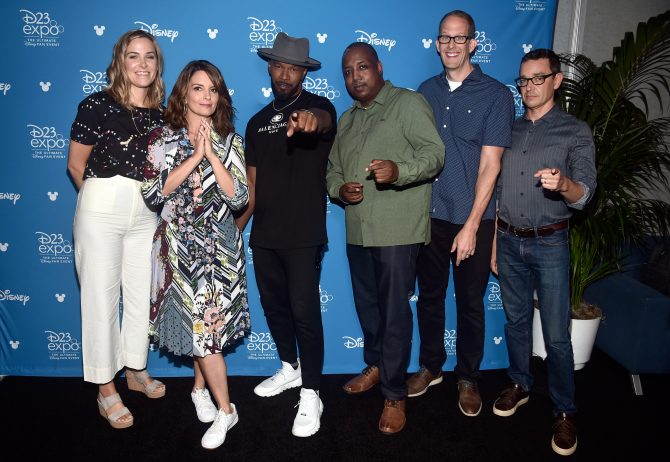