Disclosure: I was invited by Disney to attend the Onward World Premiere. All thoughts and opinions are my own.

Last night I went the world premiere of Pixar’s Onward in at The El Capitan Theatre in Hollywood. Last year I went to my first Pixar premiere, Toy Story 4 with my daughter Amelia. It was complete with ferris wheel and carnival games, very immersive to the theming of Toy Story 4! It showed Pixar knows how to put on a stellar premiere, so was super excited to see what was in store for the Onward world premiere.

For the occasion, I did a subtle GWNIVER bound (the iconic pegasus van in the film). I wore a sapphire blue evening gown with a DIY clutch my husband drew. I had my nails done with two moons which you can see on the film’s poster, with an ombre pink sparkle to represent the sunset also featured on the Onward poster. My husband did an Ian bound, wearing a blue suit, buffalo plaid shirt, and a wizard lapel pin. My daughter wanted to be a unicorn, in anticipation of the trash unicorns in the film. 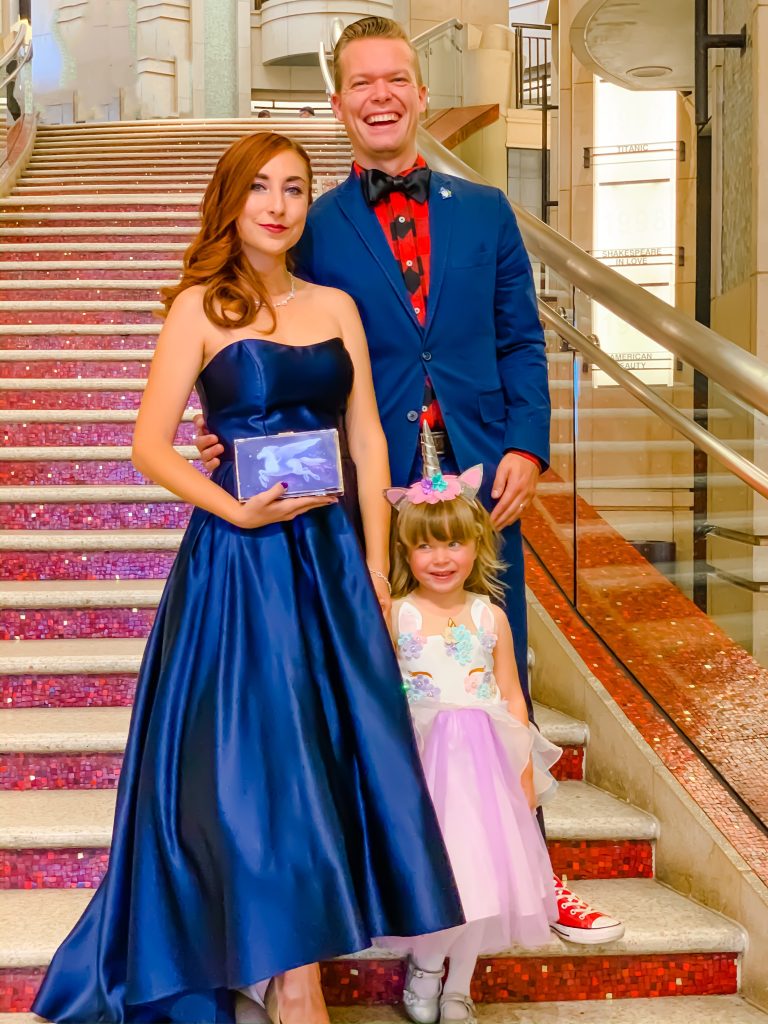 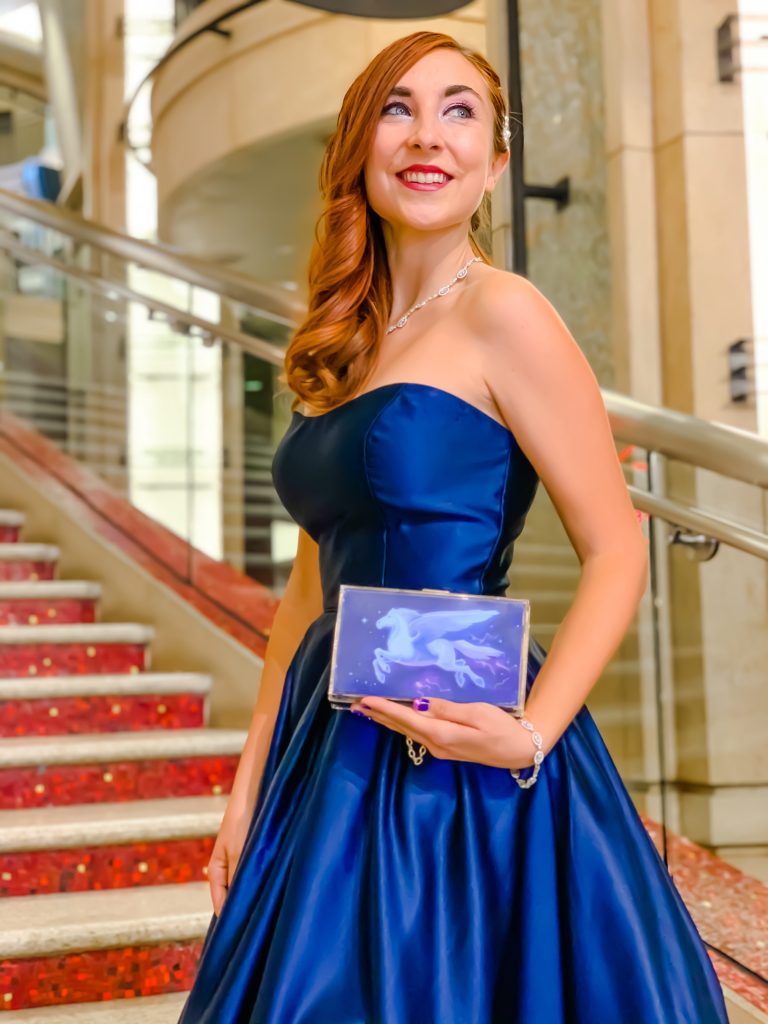 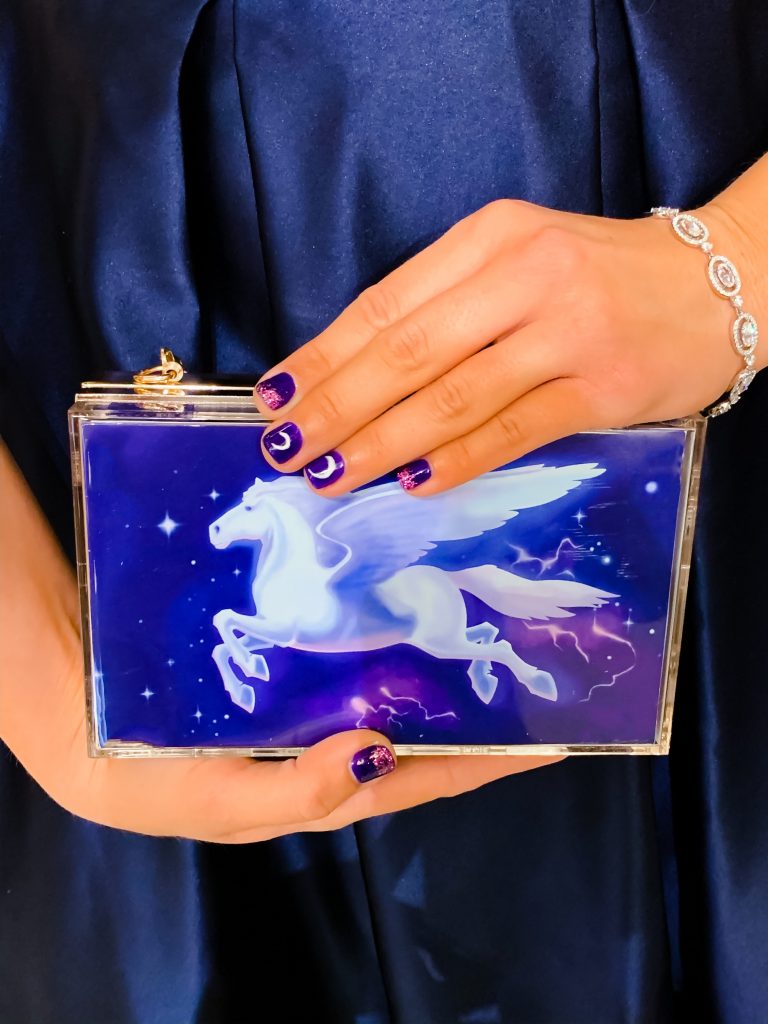 When we entered, the event had a blue carpet rolled out (very befitting). There on the blue carpet was GWNIVER. Inside the premiere, we were incredibly excited to get to be among the first group of people to get their picture with the Ian and Barley characters! 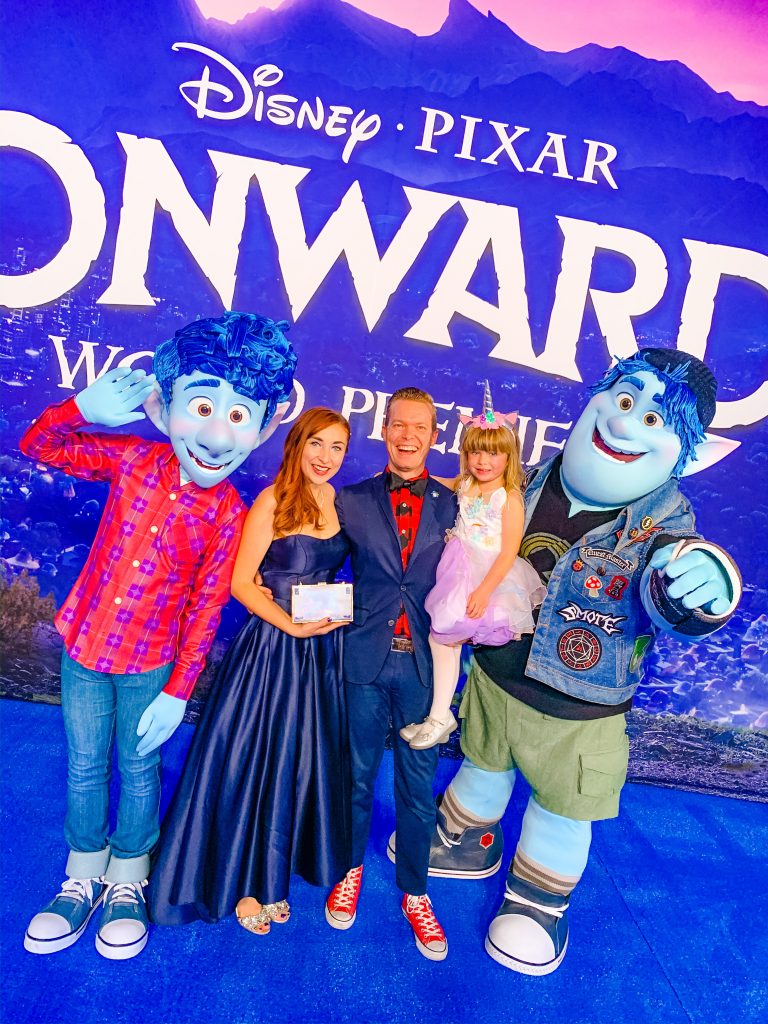 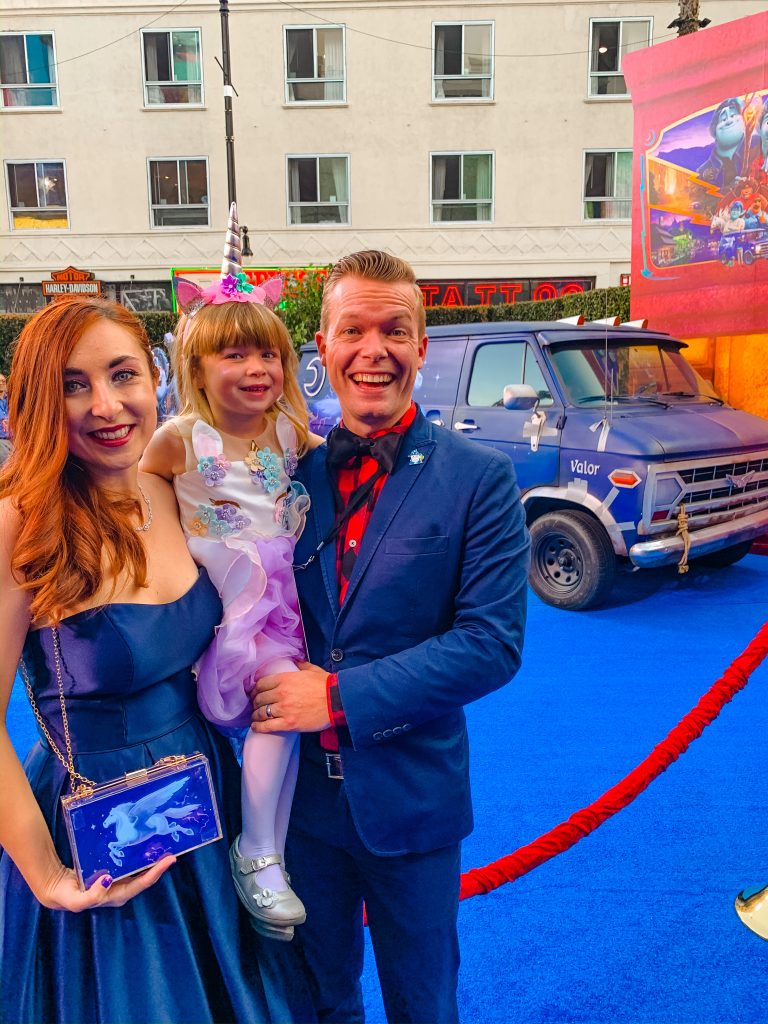 Then my favorite part: Once we walked to the end of the blue carpet, we were led inside the Hard Rock Cafe which had completely been transformed into the “Manticore’s Tavern” just for the premiere! There were claw machines with Onward toys (my husband won my daughter a miniature Luxo ball). There were also kid’s menu/coloring pages that were an exact replica of the Manticore’s Tavern kids menus in the film. 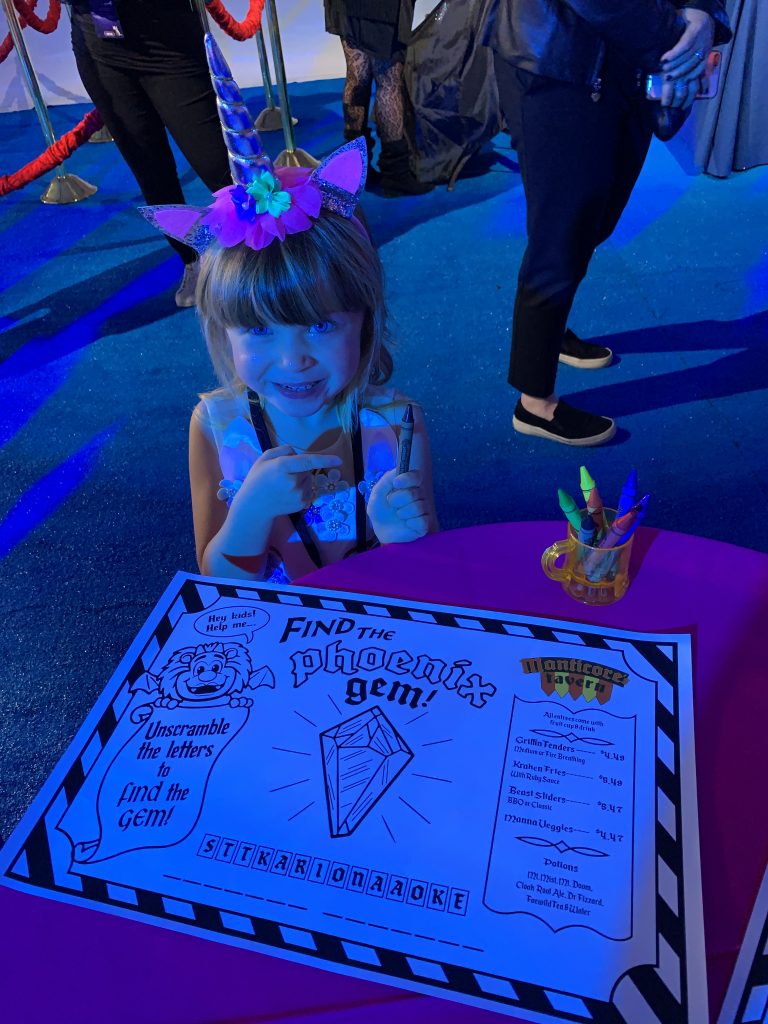 And my favorite part that was the cherry on top of the Manticore’s Tavern experience? Karaoke! They had karaoke set up with only Disney songs (my dream come true, to be honest). If you’ve seen my parody music videos on Instagram, you know I love to sing. I sang “Just Around the Riverbend,” and my husband sang “Go the Distance” from Hercules. My daughter also wanted to sing, and chose “Into the Unknown” (which I helped her out with, but impressively she knew almost all the words on her own). 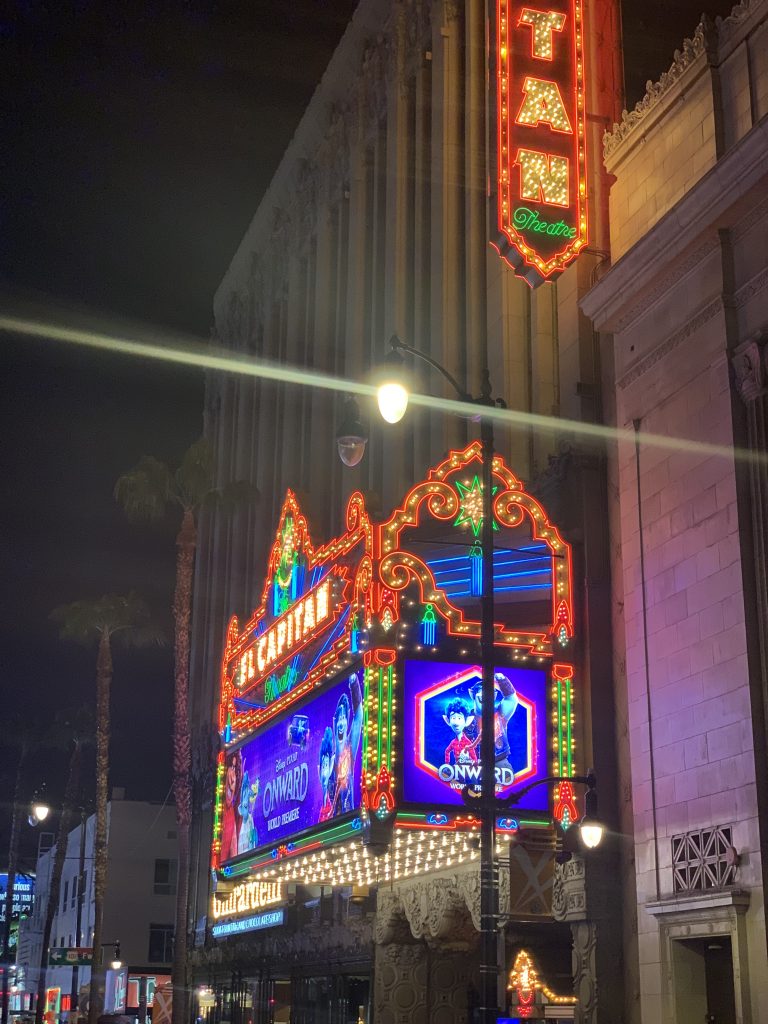 Once it was time for the movie to start, we headed into the gorgeous El Capitan Theatre where we would get to see the film. Before it started, the cast and creators went up on stage to say a few words. Two moments that happened on stage really got me tearing up (like the big Disney nerd that I am). It was when (1) Chris Pratt and Tom Holland gave each other a hug, and when (2) Dave Foley and Julia Louis-Dreyfus (aka Flik and Atta) hugged each other. 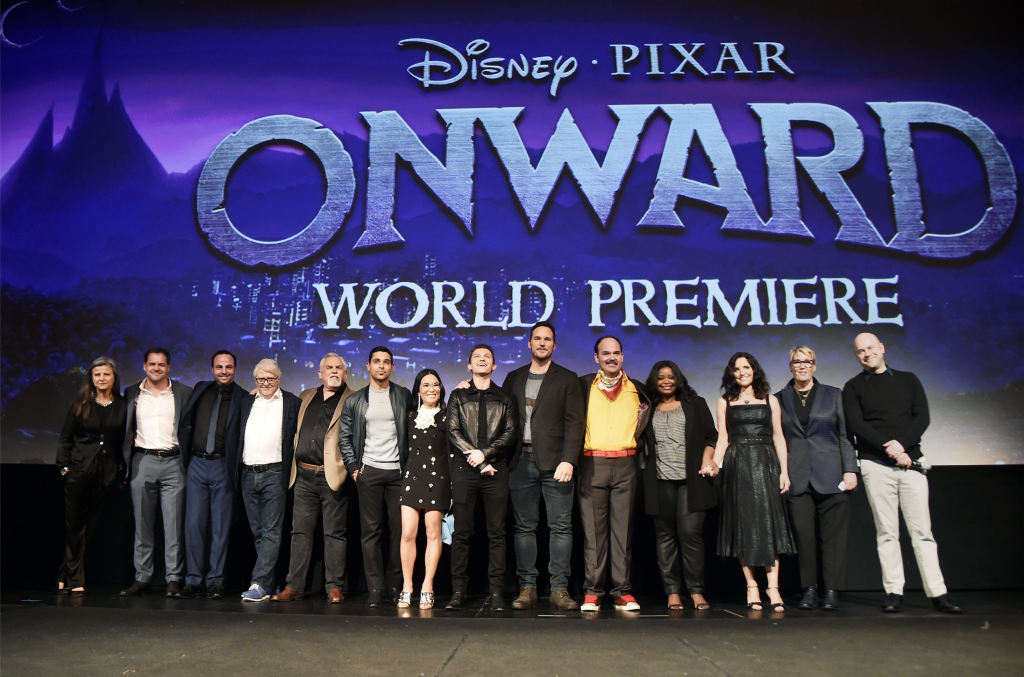 The film captured my 5 year-old daughter’s attention the whole time. It was an emotional and beautiful film to watch together as a family. Attending the Pixar Onward world premiere is a night I’ll never forget. Onward comes to theatres March 6th.

Just got out of the @pixaronward premiere! @TomHolland1996 and @prattprattpratt are the definition of lovable! Pixar magic is in full effect, blending fantastical worlds with realistic, relatable characters. And of course TEARS! #pixaronward ✨ pic.twitter.com/gHsMQWOk9b 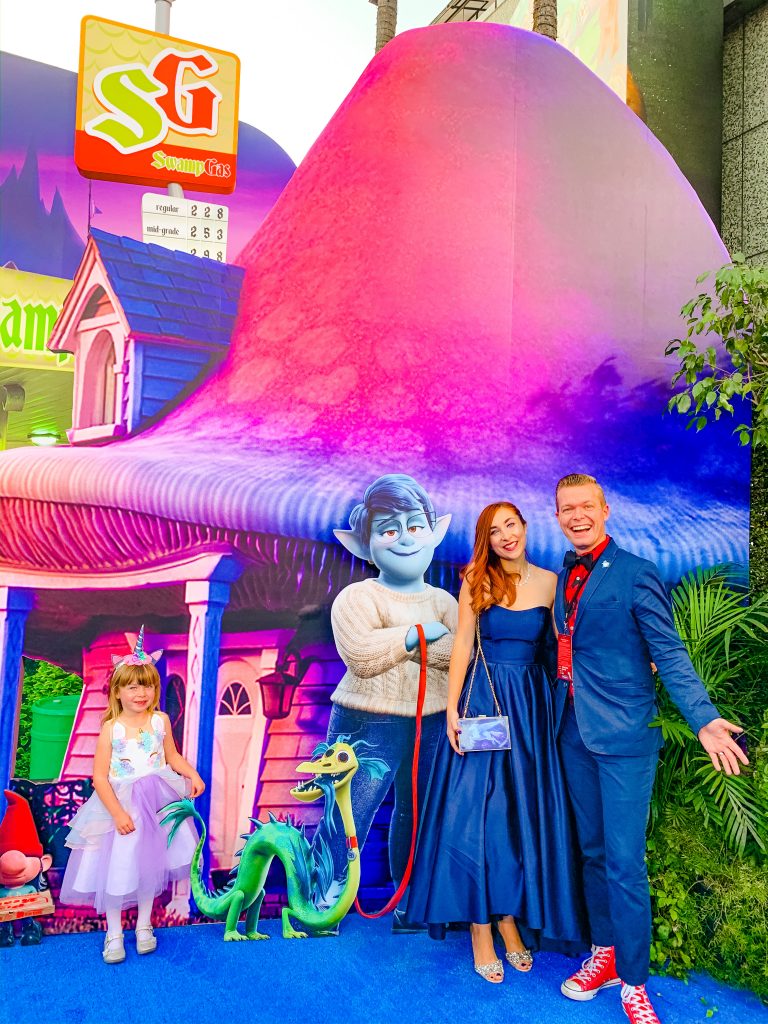