Hi, everyone! I’m Melanie Gable and I’m guest writing for The Healthy Mouse to tell you about my amazing visit to Walt Disney Animation Studios to attend a special advance screening of “Olaf’s Frozen Adventure,” a holiday-themed featurette starring lovable snowman Olaf and his friends Elsa, Anna, and Kristoff. Jessica was unable to go to the event, and I was the lucky friend she asked to attend in her place! I’m a Disney superfan, and even dreamed of becoming a Disney Animator when I was a kid, so of course I jumped at the chance to visit the studios and check out Walt Disney Animation’s latest offering. 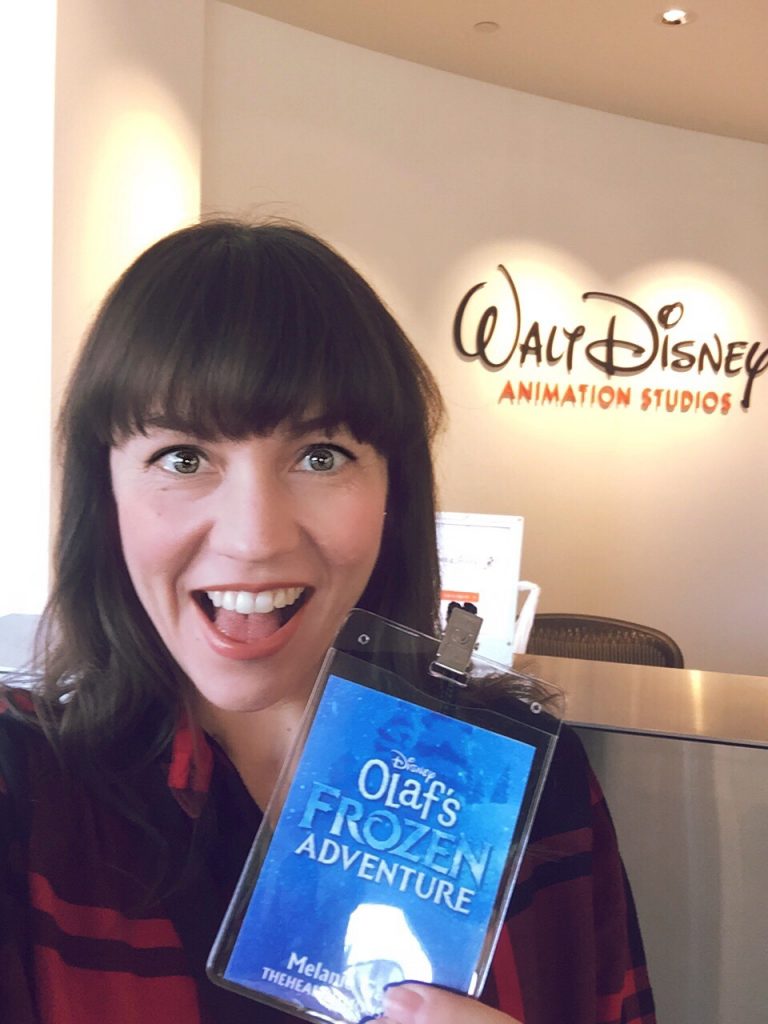 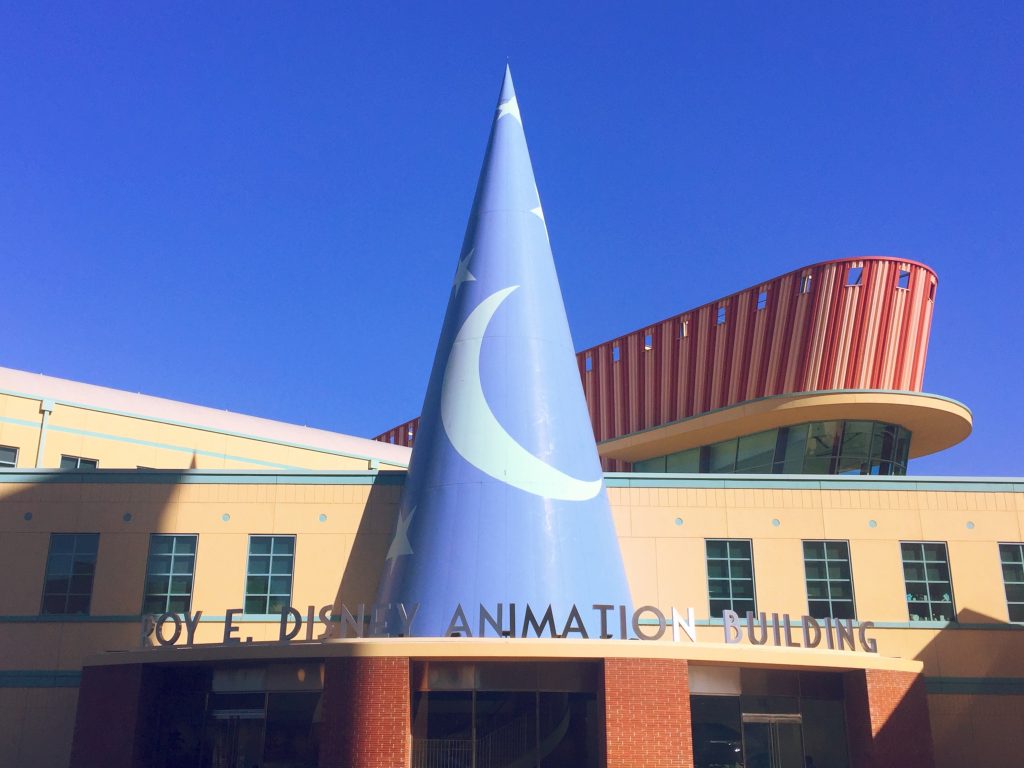 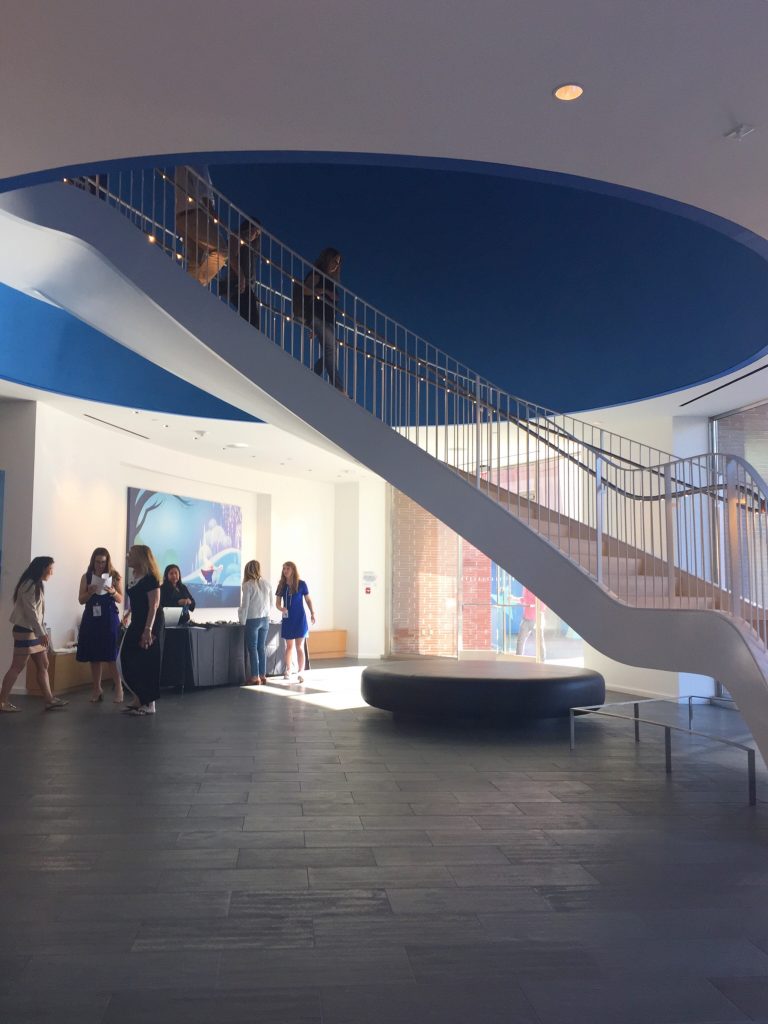 “Olaf’s Frozen Adventure,” which will open with Disney•Pixar’s original film “Coco” on November 22, is a heartfelt and hilarious seasonal adventure starring Josh Gad as the funny, endearing snowman who goes on a mission to round up the best holiday traditions he can find when royal sisters Anna and Elsa realize they have none of their own. Original “Frozen” voice actors Gad, Kristen Bell (Anna), Idina Menzel (Elsa), and Jonathan Groff (Kristoff) return to breathe life into their characters and sing entertaining and beautiful songs that propel the story forward and add to the fun. Deftly directed by Emmy-winning filmmakers Kevin Deters and Stevie Wermers-Skelton (“Prep and Landing”), “Olaf’s Frozen Adventure” made me laugh out loud and, a bit embarrassingly, shed a few tears. (Though I often cry the first time I see a Disney or Pixar animated movie, I wasn’t expecting to do so at a 21-minute featurette about Olaf! Why do you do this to me, Disney???) Deters and Wermers-Skelton certainly know how to helm a fantastic holiday special (“Prep and Landing” is a favorite in our home), and this one is no exception.

Elyssa Samsel and Kate Anderson wrote four brand new songs for the film and I absolutely loved them. Samsel and Anderson maintained a similar balance of sweet sentiment and modern humor in their songs to those in “Frozen,” but the music also had a freshness and holiday flair that was unique and perfect for this film. I adored the harmonies written for Anna and Elsa, and Bell’s and Menzel’s voices sounded as gorgeous as ever. Kristoff even got in on the act with a silly solo about his troll family’s holiday traditions. 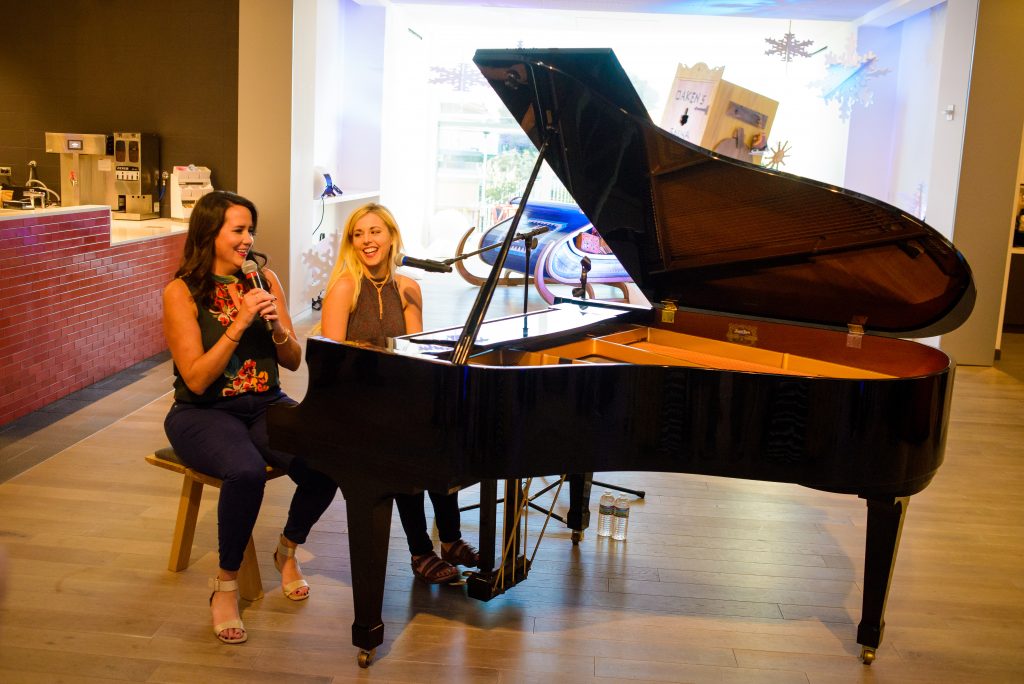 But the real standout of the film is, of course, Olaf, and his antics never fail to make the audience laugh out loud. Olaf has graduated from sidekick to leading man, and the wonderful script provides Gad with plenty of opportunities to showcase his impressive comedic talents, but he also tugs at our heartstrings when he loses hope in his ability to help Anna and Elsa have a beautiful Christmas. It doesn’t end there, and I won’t spoil it for you, but thankfully Olaf’s good humor and exuberance are restored by the end of the film and the audience is treated to some lovely holiday magic.

After the screening, we were invited to participate in a Q&A session with Oscar-winning producer Roy Conli (“Big Hero 6”), Deters, Wermers-Skelton, and Gad. The directors talked about the process of landing on the relatable theme of holiday traditions, and they loved the idea of a childlike character like Olaf discovering them – exhibiting wonder, awe, and raising questions about practices such as decorating a dying tree, hanging stockings near an open fire, or giving practically inedible fruitcake as a gift. They all then discussed their own favorite holiday activities, which included baking, hunting for the perfect live Christmas tree, decorating, and celebrating both Christmas and Hanukkah. Gad, buoyed by questions from the audience, then regaled us with stories about making this film and “Frozen,” as well as provided insight into the challenges of vocal acting vs. film and theatre acting, and the joys of having opportunities for improvisation, including seeing some of the off-the-cuff lines make the final cut. (“I’ve been impaled!”) Conli then revealed that “Olaf’s Frozen Adventure” was paired with “Coco” because both films center around familial bonds and traditions. When the Q&A session was about to end, Gad spoke up and announced he had to address one more question because it was from a child in the audience and he couldn’t leave it unanswered. When the young boy told Gad he had been worried about Olaf during a scene involving wolves, Gad reassured him that all was well and that the wolves were professionals that turned on their ferocity for the camera, but were “lovely at the craft services table.” Gad made us all laugh when he added, “We worked together on ‘Beauty and the Beast’ as well.” 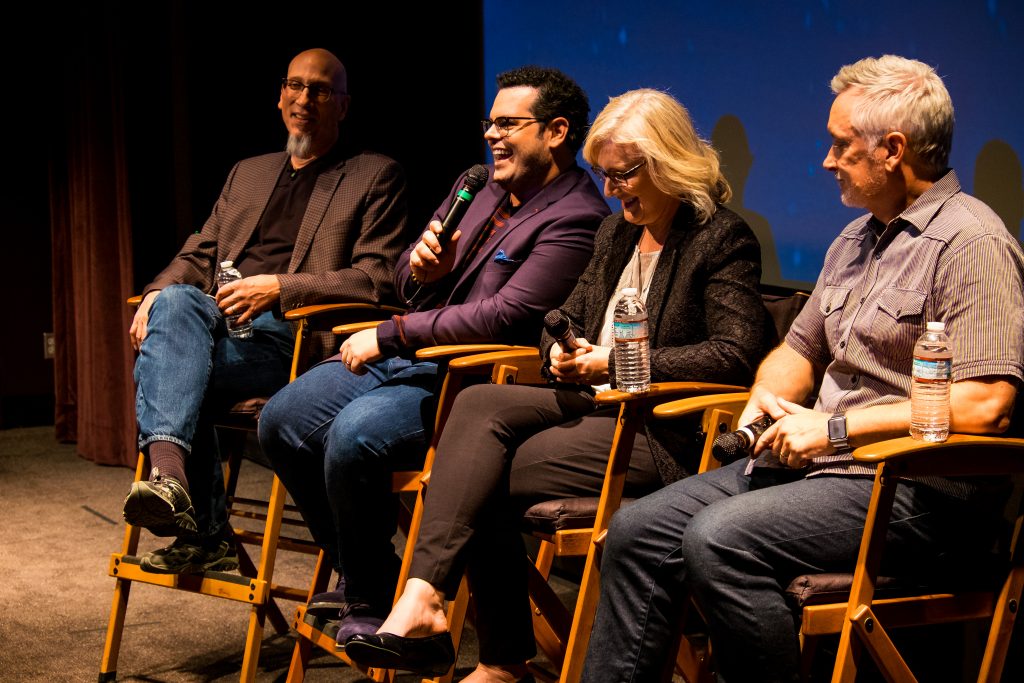 After the Q&A, we were led out of the theater and up the winding lobby stairs to the newly remodeled common area in the WDAS building, where gorgeous concept art from “Olaf’s Frozen Adventure” adorned the walls and the audience mingled with the creative talents behind the film. We were treated to blue-hued hot chocolate, savory catered hors d’oeuvres, and delicious desserts, the most adorable of which were Olaf-shaped rice crispy treats! The film’s songwriters, Elyssa Samsel and Kate Anderson, performed a beautiful live rendition of “When We’re Together,” and Head of Story Brian Kesinger was on hand to give entertaining lessons on how to draw Olaf and Sven. To top it all off, there were fun craft tables provided by Disney Family and an adorable photo op that allowed us to pretend we were riding in a one-reindeer open sleigh with Olaf. As the event came to a close, I made my way out at a leisurely pace, marveling at the vast number of concept art pieces from Walt Disney Animation’s history lining the walls, trying to soak up as much as I could before I had to return to reality. It was a magical evening to accompany a fantastic film, and the whole experience definitely got me into the holiday spirit. 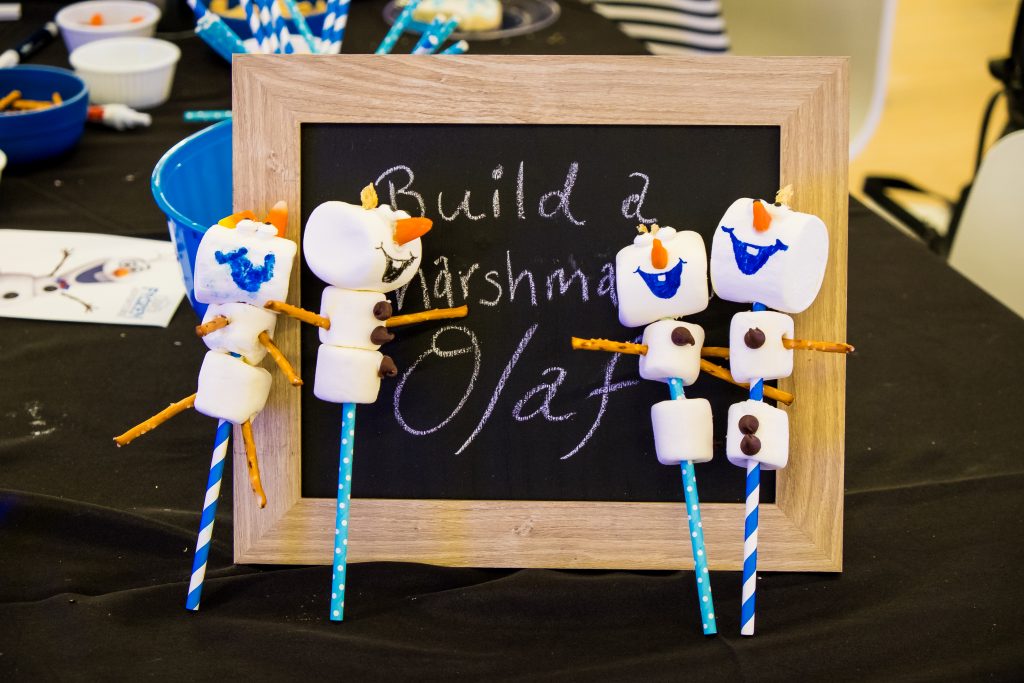 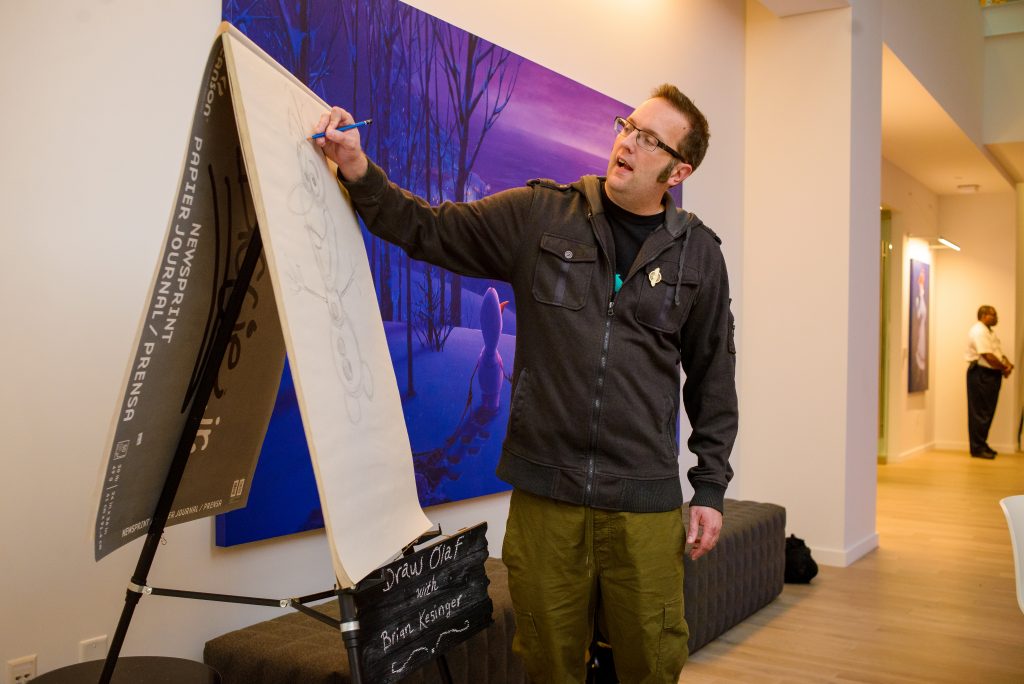 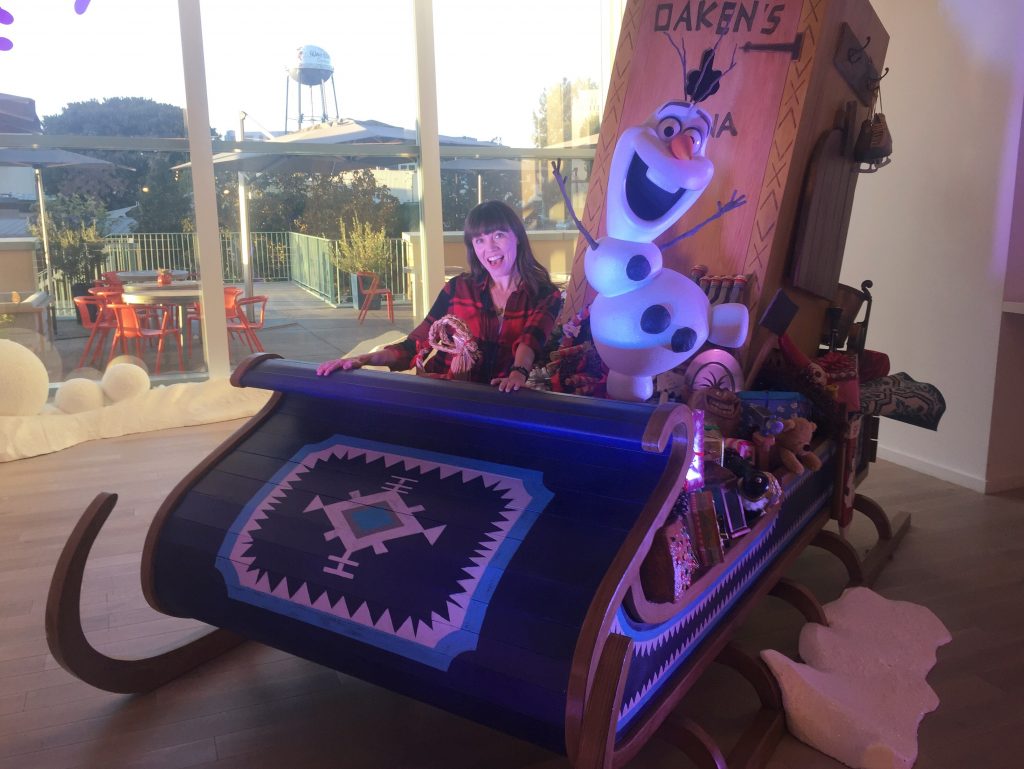 From the stunning animation to the performances to the songs and the original musical score, every element of “Olaf’s Frozen Adventure” is pitch perfect. I’m certain that watching the film every holiday season will become a new tradition for many families, as well as my own! You can see “Olaf’s Frozen Adventure” play in front of “Coco” in theaters starting November 22nd!