I recently attended what is probably one of the most iconic press conferences of my blogging career: Mary Poppins Returns. Mary Poppins is arguably the most beloved Disney live action film of all time, so to follow in its footsteps and create a sequel decades later, there’s of course a lot of anticipation leading up to Mary Poppins Returns. Not only is the sequel already iconic before its theatrical release since its the continuation of the beloved story of Mary Poppins, but the cast is also incredibly stellar. To have the actors of the film all in the same room together talking about their journey creating Mary Poppins Returns felt quite surreal! At the interview panel were:

Rob Marshall has directed many movie musicals (including Into the Woods and Chicago). This film is a passion project for him:

“Creating an original musical from scratch was actually for me a dream and I’ve never done it before. And to be able to create it with this beautiful company was exactly what I was hoping for. And I have to say the guiding message of this film about finding light in the darkness is honestly what drew me to it and kept guiding me throughout the whole process. [cont’d.] I certainly knew that I wanted to live in that world and be part of that and sending the message out into the world now of looking for hope and light in a dark time.”

Marshall considers Mary Poppins Returns to be his most personal film to date since the philosophy of the film, of finding light in a dark time, is something he is personally searching for. He also considers this film to be the hardest work he has ever had to do, making it a joyous project for that very same reason.

“It was such an extraordinary rather unparalleled moment for me because I was filled with an instantaneous yes, but also with some trepidation all happening simultaneously in that moment because she [Mary Poppins] is so iconic. She had such a big imprint on my life and on everyone’s lives.”

Blunt wanted to make sure her portrayal wasn’t a bad impersonation of Julie Andrews. She wanted to preserve what Julie Andrews had done while also being true to the character of Mary Poppins. She found the P.L. Travers books to be very helpful in researching the character, and made sure not to watch the original Disney film while she was filming Mary Poppins Returns, to make sure it didn’t unconsciously imitate Andrews portrayal.

Lin-Manuel Miranda on Receiving the Role of Jack

At the press conference, Lin-Manuel Miranda recalled seeing the midnight premiere screening of Rob Marshall’s Chicago, and thinking it was the greatest modern movie musical he had ever seen in his life. So to get a call from Marshall about being in one of his films was a dream come true. At the time the role was offered he was still in Hamilton, where his character is so different from that of Jack. Hamilton having a traumatic early life and wanting to devour the world, whereas Jack has a sense of childlike wonder. He was so grateful that they envisioned him in this role that’s so different. One of his most memorable moments during filming was bringing his son to set:

“I brought my son to set every time we filmed a musical number and to watch his eyes like saucers while daddy danced with, you know, what seems like 500 dancers and bikers. I’ll never forget the look in his face as long as I live.”

Emily Mortimer on Being Part of Mary Poppins Returns

Despite having to fly back and forth from her home in the United States to filming in London, Mortimer gladly did the long flights to play Jane Banks in the film.

“I’ve done a lot of movies and I know enough about life as an actor to know that when somebody inspires you and makes you excited about the idea of a movie or a project, it’s a rare thing and you have to go with it. You just have to try to jump on that train if you can and so I emerged from meeting Rob and John and rung up my agents immediately and said I just have to be a part of this movie no matter what.”

Mortimer talked about how magical it always felt on set, and how she formed friendships with the cast which were immediate. The experience as a whole is something she will treasure forever.

Mary Poppins was his favorite film growing up, becoming a huge part of his childhood. He said playing the character came easily to him since the script was so beautifully written with fantastic songs, that playing Michael Banks came fell naturally into place. 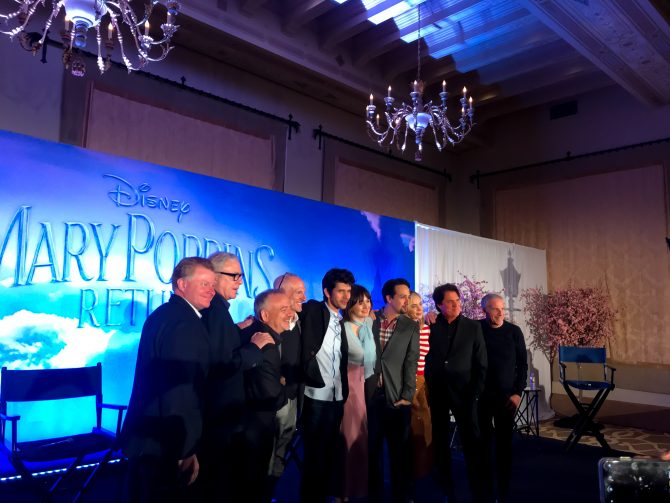