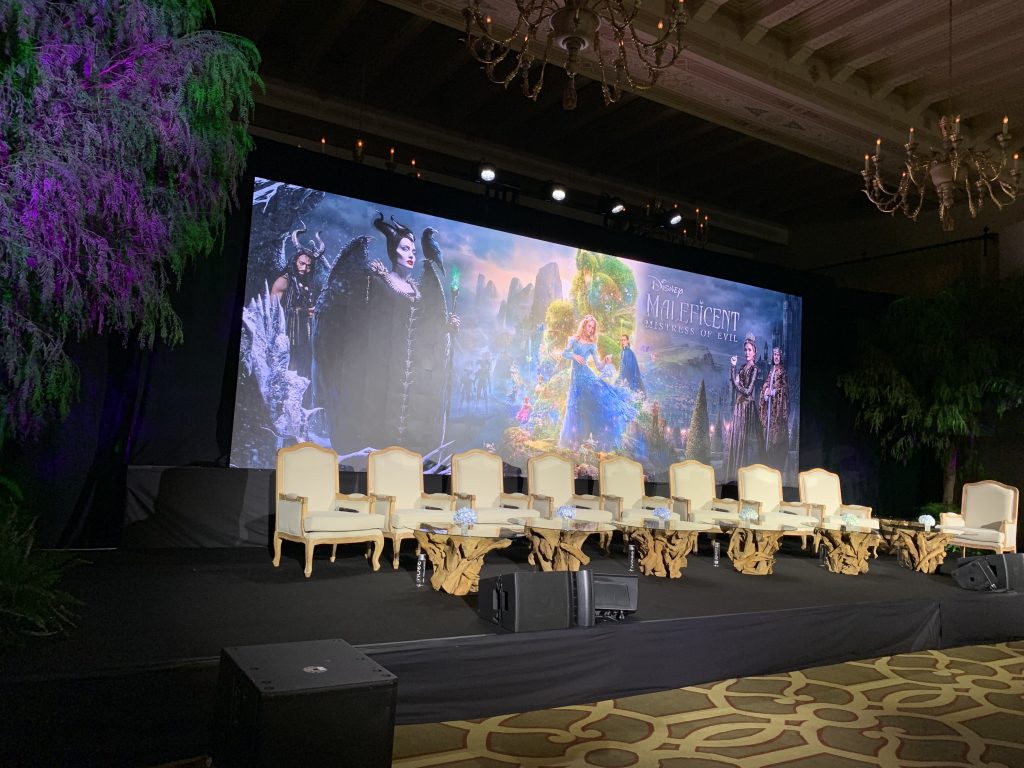 I recently had a day where I was able to visit the lovely Montage Beverly Hills for the Maleficent: Mistress of Evil press junket. I had just seen the film the night before (full review coming soon), and was excited to hear about the actors’ journeys returning to play these characters five years later, something I always find intriguing to hear about with a sequel! The stage was decorated to be reminiscent of the Moors, Maleficent and Aurora’s home. Then the moment arrived where the cast walked out onstage! In attendance were Angelina Jolie (Maleficent), Elle Fanning (Aurora), Michelle Pfeiffer (Queen Ingrith), Chiwetel Ejiofor (Conall), Sam Riley (Diaval), Harris Dickinson (Prince Philip), Ed Skrein (Borra), and director Joachim Ronning. 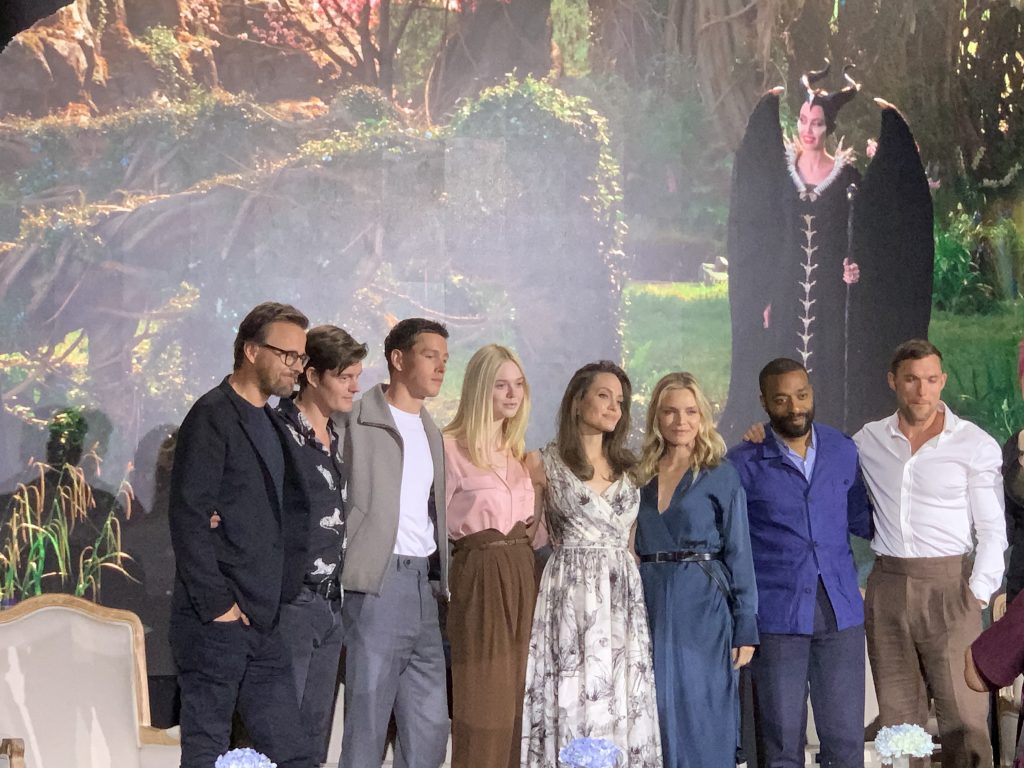 How Did They Expand On the Universe in Maleficent: Mistress of Evil?

Audiences learned so much more about Maleficent and Aurora’s stories in the first film, yet in Mistress of Evil their stories dive even deeper. Director Joachim Ronning talked about his vision of expanding the universe in this film. Ronning wanted to make sure he kept a lot of the same elements of this universe fans are familiar with since it is something so beloved, but take Maleficent’s character to a new level to add something new and original.

“I feel a huge part of the success of the first film is that it had such a strong emotional core, and that’s the most important thing for me to continue telling that story. The story about Maleficent and Aurora, and something I can also relate to as a parent myself.”

Joining the Cast of Maleficent: Mistress of Evil

Newcomers to the sequel Chiwetel Ejiofor and Ed Skrein talk about becoming part of the cast, who play characters who are both Dark Fang, the same species as Maleficent. Skrein reminisced about all the layers of preparation for this role. He thought about the character intellectually on his own before meeting any of the other cast members, so he could go in really understanding Borra’s viewpoints and drive. In terms of physically preparing for the roles? There were a lot of interesting moments of trying to not get their almost 2-feet-long horns tangled up with one another when they were flying on harnesses on set!

Michelle Pfeiffer, who has played the iconic villain Cat Woman, plays I feel an equally iconic villain in her role of Queen Ingrith in Maleficent: Mistress of Evil. Pfeiffer talked about an aspect of her character she loves, which is how her role as “villain” isn’t a story about good versus evil, but her character is in more of a gray area. Her motivations for her actions aren’t from her being pure evil, but rather come from a place of fear. 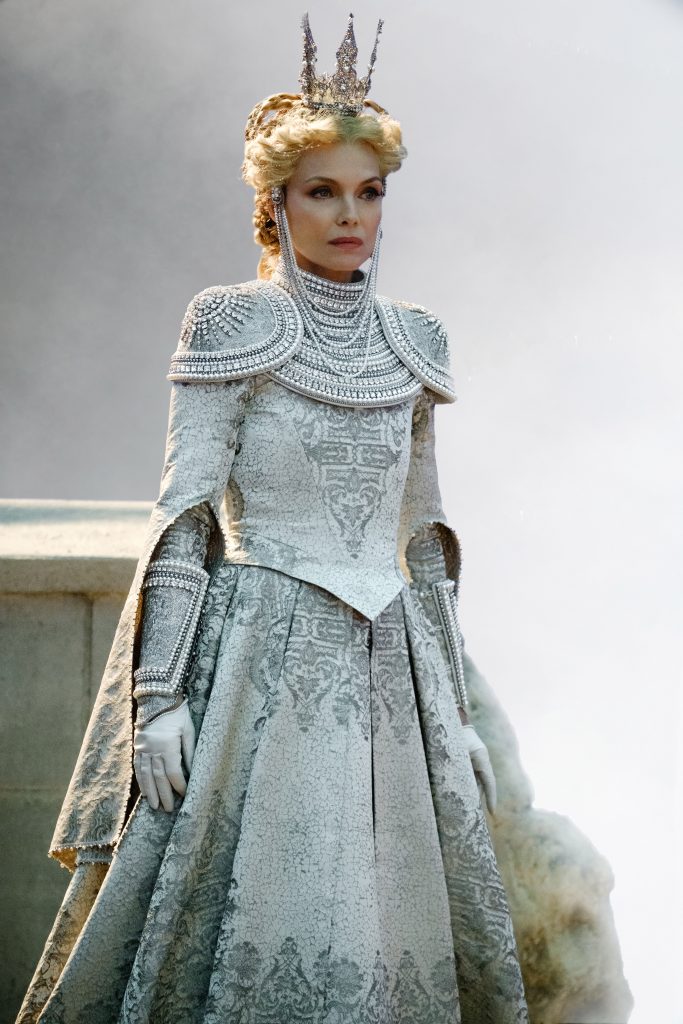 Returning as Maleficent and Princess Aurora 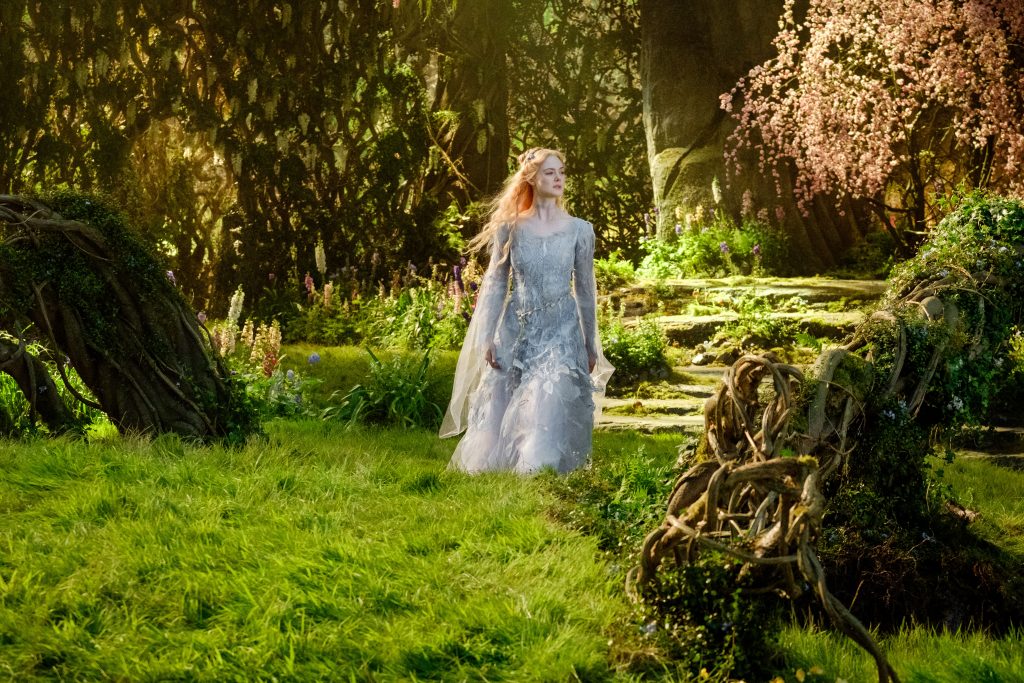 Elle Fanning talks about how Princess Aurora in both films lives harmoniously with both sides (humans and Moorfolk) and can’t understand why everyone can’t do that. In Maleficent: Mistress of Evil, there is a lot of growth though. She is stronger and has a lot more conviction in herself, and is gaining her independence. Fanning loves the family theme of the movie, and how it is in many ways relatable to leaving home and learning to make your own choices as you’re transitioning into adulthood.

Angelina Jolie is Maleficent in Disneyâ€™s MALEFICENT: MISTRESS OF EVIL.

Angelina Jolie also talked about the family elements of the film. There’s a period of the film where everyone really focuses on their differences and isolates themselves. As the characters grow, they learn that that’s not a way to live as a family. Rather, diversity makes us stronger, and the characters learn to come together and decide that that’s the world they chose to live in. Jolie feels like this bigger picture of the story is the message she hopes audiences will take away from the film.

Maleficent: Mistress of Evil is coming to theatres on October 18th. You can find tickets here.