It’s incredibly exciting to say the least, that we fially have a sequel to Incredibles 2 after 14 years! When Pixar first released The Incredibles, writer-director Brad Bird’s signature story about Bob (aka Mr. Incredible) and Helen Parr (aka Elastigirl), as two retired superheroes with their super-powered children, living in a world where superheroes have been outlawed. The film was an immediate hit and has become a classic amongst Pixar’s impressive body of work, so much so that fans have been calling for a sequel for years. Today, those wishes have been granted, as Incredibles 2 finally makes it to the big screen. With intense action, family-centered drama, and some of the most beautiful animation to come from the studio, Incredibles 2 marks another successful adventure, and does the impossible by making an truly entertaining superhero film in a post-Avengers world.

The film picks up immediately after the end of the first Incredibles film, and while the Parrs have decided to resume their superhero lifestyles, the rest of the world still questions if supers cause more damage than they prevent. The super family is approached by brother-sister entrepreneurs Winston and Evelyn Deavor to boldly reshape the public’s perception of superheroes and make them legal once again, with Elastigirl as the program’s spokesperson. This leaves Bob at home, taking on the mantel of stay-at-home dad for the first time, trying to assist Dash with homework, Violet with boy troubles, and baby Jack-Jack who is exhibiting unusual and unpredictable powers. And if troubles at home weren’t bad enough, Helen has her hands full tracking down new supervillain The Screenslaver, who has an evil plan to defeat supers for good.

Being a superhero movie before all else, action set pieces are around each corner. While the original never skimped when it came to action scenes, the sequel intensifies these scenes, benefiting from 14 years worth of technology upgrades. From helicopter-on-helicopter attacks to high speed chases with an elevated train, the thrills come fast and furious from beginning to end. The film even features elements of a thriller film, aided by the presence of a particularly creepy antagonist. (The Screenslaver’s glowing eyes and generally menacing appearance alone may be a little scary for younger kids — my 3-year-old was a little nervous during some scenes but overall she said she loved the movie and wanted to see it again.) 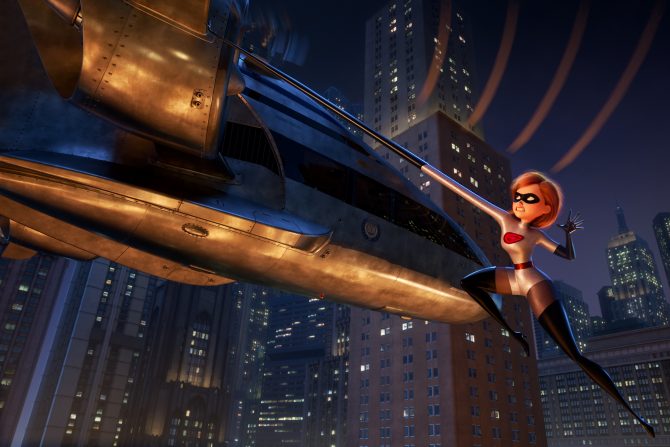 The film spends most of its time focusing on the shifting dynamic in the Parr household, as ill-experienced Bob is placed in charge of taking care of the Parr children, demonstrating the stresses and challenges that come with the job. As a parent, it was both relatable and cathartic to see Mr. Incredible try (and often fail) at “adulting” and attempting to handle seemingly simple tasks such as bedtime.

The star of the show, however, is little Jack-Jack. At the climax of the previous Incredibles film, Jack-Jack suddenly displayed his new emerging powers, after it being thought he was “normal.” The sequel confirms he is anything but normal, with a growing list of powers. In an amazing, instant-classic scene, Jack-Jack shows off many (but by no means all) of his new powers to defend his home against his arch-nemesis, a garbage-stealing raccoon. A tour-de-force in animation and fight choreography, the scene is easily the most memorable from a movie with many fantastic set pieces.

In the end, the Incredibles sequel lives up to the hype that has been building for over a decade, producing a story that’s perhaps even stronger than the first, but still providing the same realistic, family-centric heart that Pixar is famous for. Incredibles 2 will almost certainly become yet another beloved movie from the legendary animation studio, as fans wait around for (hopefully) the next sequel.

Incredibles 2 and Pixar’s short film Bao is now available on Blu-ray, you can find the digital with bonus features here.