I can’t believe the moment Frozen fans have been waiting for for six years is almost here: the release of Frozen 2! As a huge Frozen fan, I was thrilled to get to visit Walt Disney Animation Studios in Burbank to get a sneak peek of the making of Frozen 2 from the filmmakers. One of the fascinating behind-the-scenes look we got on Frozen 2 was how they create and animate the stunning musical sequence “Into the Unknown”! We heard from Visual Development Artist Brittney Lee, Head of Story Normand Lemay, Executive Music Producer Tom MacDougall, Head of Effects Animation Dale Mayeda, and Animation Supervisors Justin Sklar and Michael Woodside. Here’s a little sneak peek of the song “Into the Unknown” for reference:

One of Elsa’s new songs is titled “Into the Unknown,” where she voices her urge to discover if there are others out there with magic and power like hers (this is the song we got to see at the Studios panel at D23 Expo if you were there)! With songs being very powerful moments for Frozen and Frozen 2, there’s lots of thought put into each detail of a musical sequence:

“In everything that you see, we’re trying to infuse a little bit of information to help the audience process the story and try to support the journey that we’re building. For a character like Elsa, costume and hair design are important because she’s very complex and constantly evolving, so we are really trying to help that journey along through what she is wearing, trying to infuse narrative in her costuming from the very beginning.” -Brittney Lee

Designing Elsa’s Dress for “Into the Unknown” 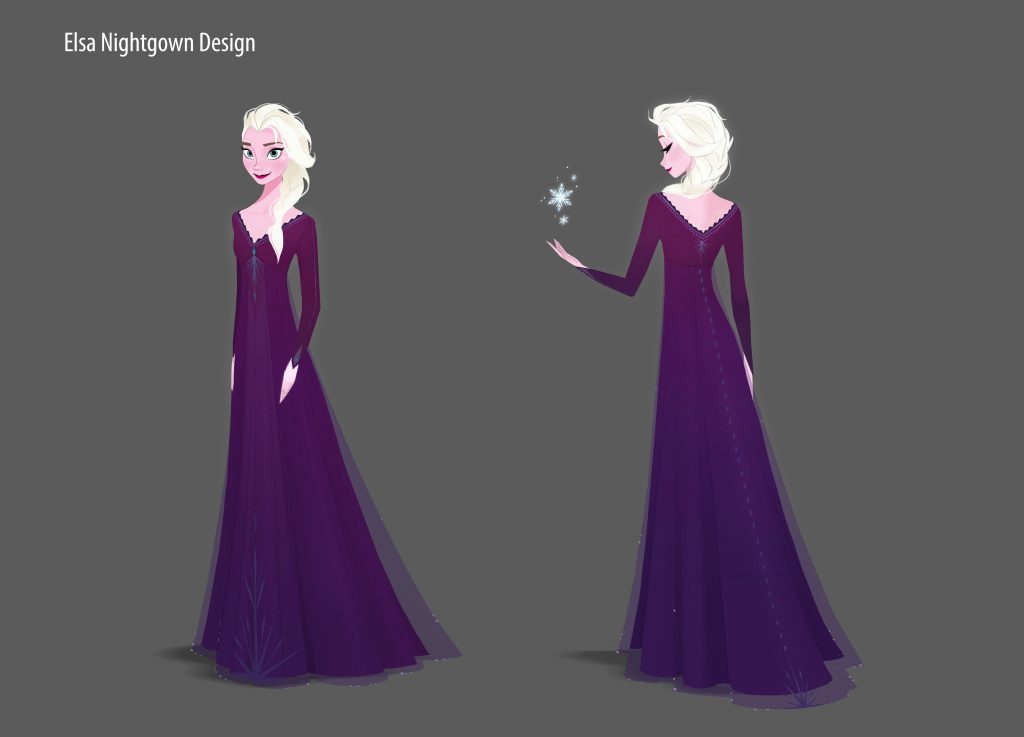 With their costumes, Lee talked about how when Anna and Elsa are young girls in the first Frozen they are in very bright and pastel colors. Then during “Do You Want to Build a Snowman,” as we see the sisters grow up, Elsa ends up in darker colors until she transforms into who she truly is, the “authentic Elsa.” During “Into the Unknown”, the filmmakers wanted the color of her dress and silhouette to match her true self, so chose a silhouette similar to her ice castle dress from the first Frozen, but in a dark plum purple. They wanted the darker color of her dress to represent that there is conflict within her about going “into the unknown.” They also wanted her to have on a warmer, darker color to have a cozy feel since before the musical sequence she’s having a cozy night in playing charades with Anna, Kristoff, Olaf and Sven. Even though it’s a nightgown that she is wearing during this song sequence, they wanted it to look very glamorous, to be true to Elsa’s style. Elsa has the ability to push the boundaries with the glamour of her clothes, since she’s not restricted to what real world materials would have been available in the Nordic region in their time period – Elsa has the ability to make her own clothing with ice magic!

There was discussion about changing Elsa’s iconic side braid hairstyle, but they decided to keep her hair the same since they wanted audiences to dive into this musical sequence with familiarity. The filmmakers wanted the audiences to see this scene of a family game night in the castle feeling like they were a part of it and could identify with the characters right away.

“We utilize every frame and every bit of the frame we can to tell, tell the story, right down to the very last bit embroidering, every thread, every bead, every sequin. We design to hopefully reinforce who she is and what she’s going through at any particular point in time, and here it was really important, in straying a little bit with her, that we infuse this costume with snowflakes because that is Elsa and we want you to know that she is her true self, self still. She’s still adorned with snowflakes are everywhere, and they’re important for her.” – Brittney Lee

Creating the Story of “Into the Unknown”

While it has been six years since the first film was released in theatres, the time hop written from Frozen to Frozen 2 is actually three years. While Elsa is now queen of Arendelle, there is still something that conflicts Elsa. Before the musical sequence “Into the Unknown,” she hears a voice singing (and no one else can hear it). This voice singing is actually the same singing voice and tune we hear in the first Frozen when the Queen and King are rushing to the trolls to help heal Anna after Elsa accidently strikes her head with ice. Lemay talks us through the story of the song to explain its depth. Now three years of Elsa being queen, she keeps hearing this voice. Elsa is desperate to know where it’s coming from and what it means, leading to her “I want” song of the film: “Into the Unknown.” Rather than a traditional “I want” song in a film that expresses a character’s desires, Elsa’s version of this song is her trying to suppress her desires and shy away from how she truly feels.

Once the story team gets the song and script for this sequence, they do a first round of storyboards to try to visualize how it will look in the film. The sequence begins at night when Anna and Elsa are asleep, and the voice awakens Elsa and can’t escape from its persistence. She then goes outside where Elsa expresses her inner conflict, of how she wants to know what the voice is but wants more than anything to shake it to keep her family protected and not cause trouble. In a vulnerable moment, she admits that she’s not sure she’s where she’s meant to be and is wondering why her powers seem to be growing. While outside in the middle of the night alone, she plays with her powers, when suddenly an outside force takes over her own powers and uses them to show her visions, to show her a world far outside of Arendelle. She sees an enchanted forest in these visions, that feel brand new yet have a sense of familiarity. The more she gives into playing with her powers, the more visions she sees.

“So, overall what we were trying to do in storyboard is to get the first stab at trying to execute a version of the sequence and try to evoke as much with a few lines and shapes and pass it on to other departments that will then help make it shine with the final product.”-Normand Lemy

Executive Music Producer Tom MacDougall said when they begin creating the Frozen 2 musical scenes, they first look over a script, they think about which parts are “set piece moments” for the characters when deciding what to musicalize.

“What is their drive? What is their intention? When we start a song in a musical, we want the character to be at one particular point and at the end of that song and give you a whole bunch of new information or new understanding about that character.” – Tom MacDougall

Once the team decides what moments will be musicalized, they send those pages to the songwriters Robert Lopez and Kristen Anderson-Lopez. From that, the Lopezes will send a rough demo of Robert playing the piano and Kristen singing so they can get a feel for if the song will work to help propel the character’s story and the scene.

Creating the Effects in “Into the Unknown”

Dale Mayeda talked a bit about the Animation Effects team designed the ice magic in this musical sequence. When Elsa sees ice visions during the song, the Animation Effects team wanted to make it clear to the audience that Elsa isn’t conjuring up these visions, but that something else has taken over her magic. They do this by changing the direction, movement, speed and color of her ice.

“Dan Lund also did these really beautiful inspirational paintings, and when we were trying to decide what these ice visions look like, and we wanted to go with something actually kind of really beautiful and stylized and something that really evokes emotion and kind of that, it really felt like it was kind of inspirational art like this that helps to bring the sort of emotional charm and that real Disney feel.” – Dale Mayeda

Animating “Into the Unknown”

Animation Supervisors Michael Woodside and Justin Sklar share that when they are beginning to think how to animate the Frozen 2 musical scenes, they look to blend the magic of live action musical performances and combine that with Disney magic, and interpret it all for a modern audience to appreciate in a fresh new way. Disney brought in a vocal coach and musical director to work with animators on multiple sessions, to show them breathing techniques for singing. They wanted the animators to understand how breathing for singing feels, and how it looks to help animate these techniques on Elsa so it looks like she is actually having to breath and push through the massive notes in “Into the Unknown.” THey wanted to get the anticipation and the setup of Menzel’s inhales accurate in the animation to make it feel powerful.

“We hope that as you’re watching the film, you see the characters realize the lyrics they’re about to sing before they sing the lyrics, sing the lyrics and then react to them after they sing it because this is new information to them that they’re just discovering on their own.” – Michael Woodside

INTO THE UNKNOWN – In “Frozen 2,” Elsa feels that she’s being beckoned by a voice from far away, a calling she can’t ignore showcased in the original song “Into the Unknown.” She learns that answers await her—but she must venture far from home. Featuring Idina Menzel as the voice of Elsa, Walt Disney Animation Studios’ “Frozen 2” opens in U.S. theaters on Nov. 22, 2019. © 2019 Disney. All Rights Reserved.