Have a Frozen 2 Family Night Out This Holiday Season!

Disclosure: I was provided these Frozen 2 family night out experiences courtesy of Disney, but all thoughts and opinions are my own.

I cannot express how excited I am that the sequel to my favorite movie, Frozen, has finally arrived. Frozen 2 is in theatres! And thank goodness right before the week of Thanksgiving – extra vacation time means extra time to see Frozen 2 in the theatres again after already seeing it opening night.

Six years ago I had just recently had a miscarriage before having my daughter Amelia, and it was one of the toughest times of my life. Soon after that happened, Frozen was released in theatres. I saw the movie five times in the theatres, and listened to the soundtrack constantly. It gave me a lot of joy during a very hard time in my life, which is part of the reason the movie means so much to me.

So you can imagine I was feeling excited to be able to see Frozen 2 in theatres now with my daughter! I wanted to make the experience an incredibly special day for our Frozen 2 family night out. First, we got dressed in Anna and Elsa costumes from the new film. Next, we went to our local DryBar to get our hair braided like the characters. We booked our reservation online ahead of time, requesting a dry style with braiding. Our stylist did it perfectly from the picture I showed her of the Frozen 2 poster: 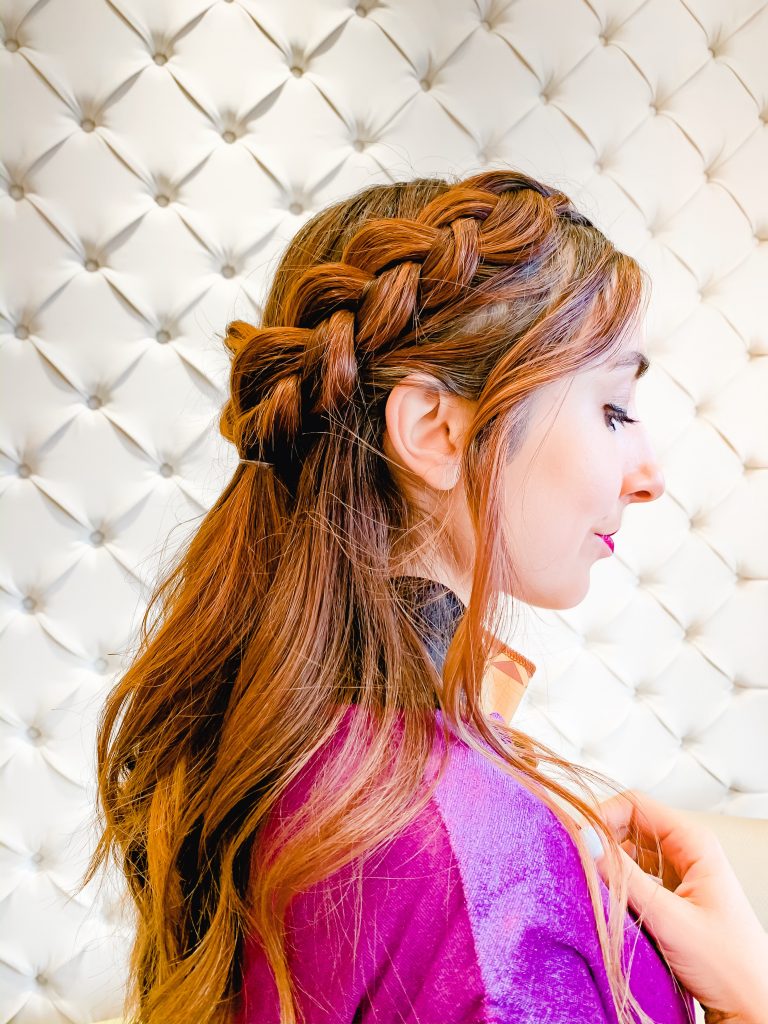 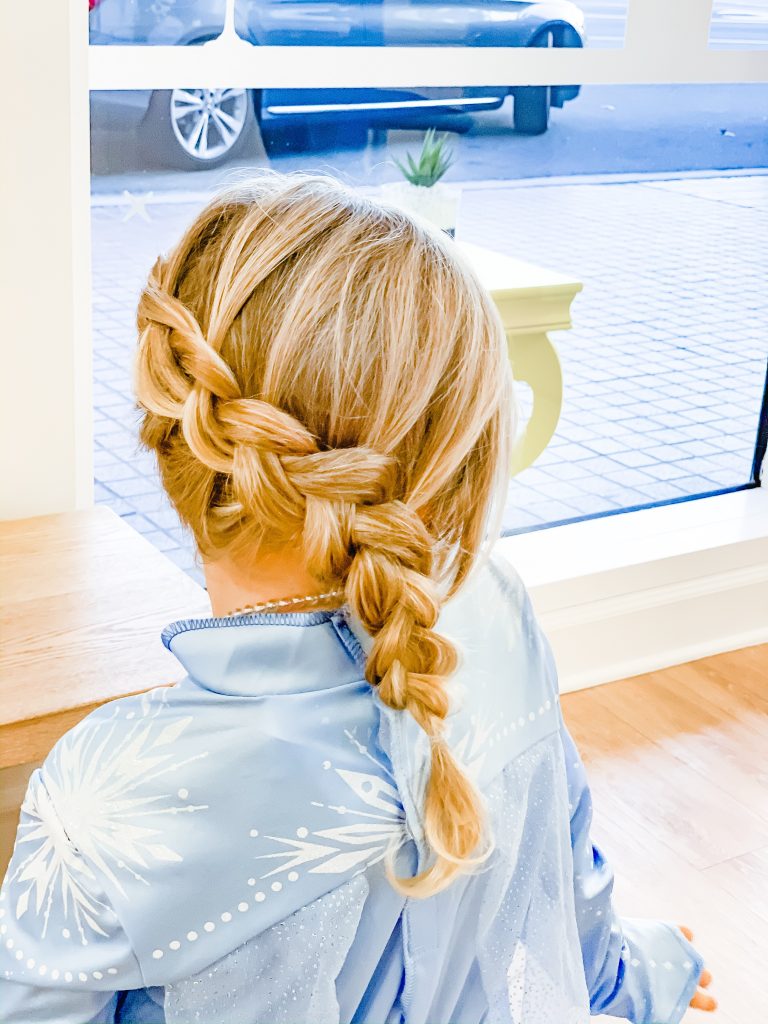 Once we were dressed up as our favorite characters (mine is Anna, and Amelia’s is Elsa) we headed to Downtown Burbank to grab dinner, and take some photos outside the theatre. Once inside the theatre, we waited for the moment we’ve been waiting for: the movie! 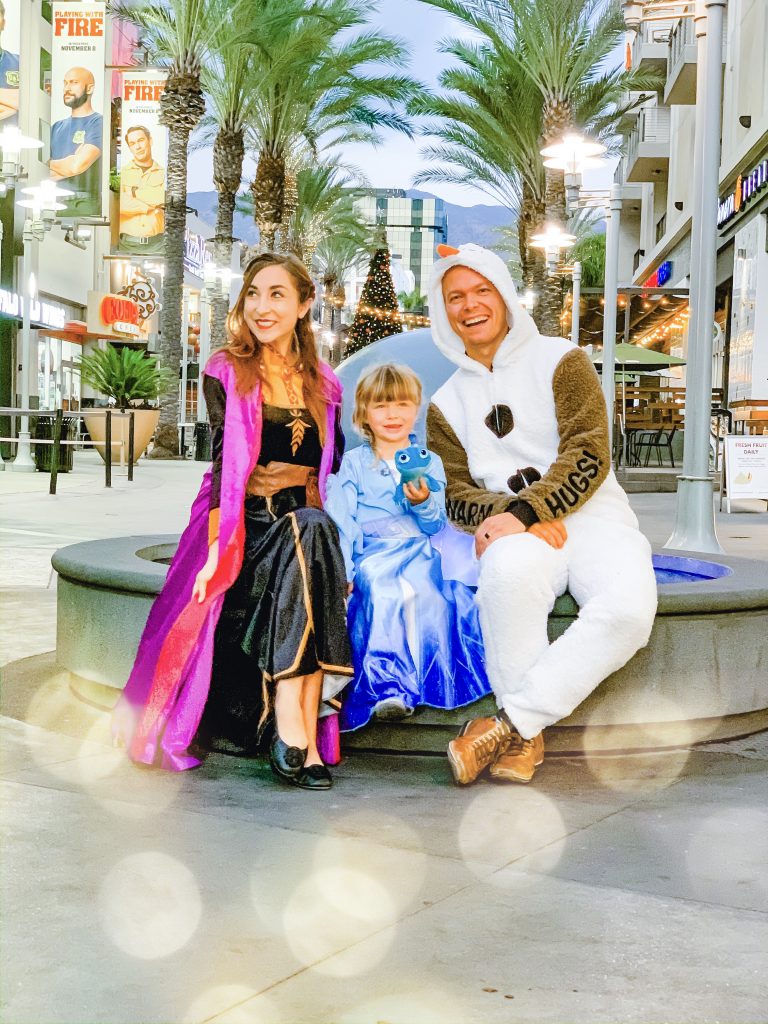 But before that started, we had the biggest surprise in our movie theatre. After the previews, right before the film started, the lights in the theatre brightened and someone came out to the front of the theatre. My first thought: Oh no we’ve been so excited for the movie, and something’s wrong with the film or sound, or something! But he introduced himself as a member from Walt Disney Studios publicity, and that a special guest was there to say hi to us before the film: JOSH GAD (voice of Olaf)! 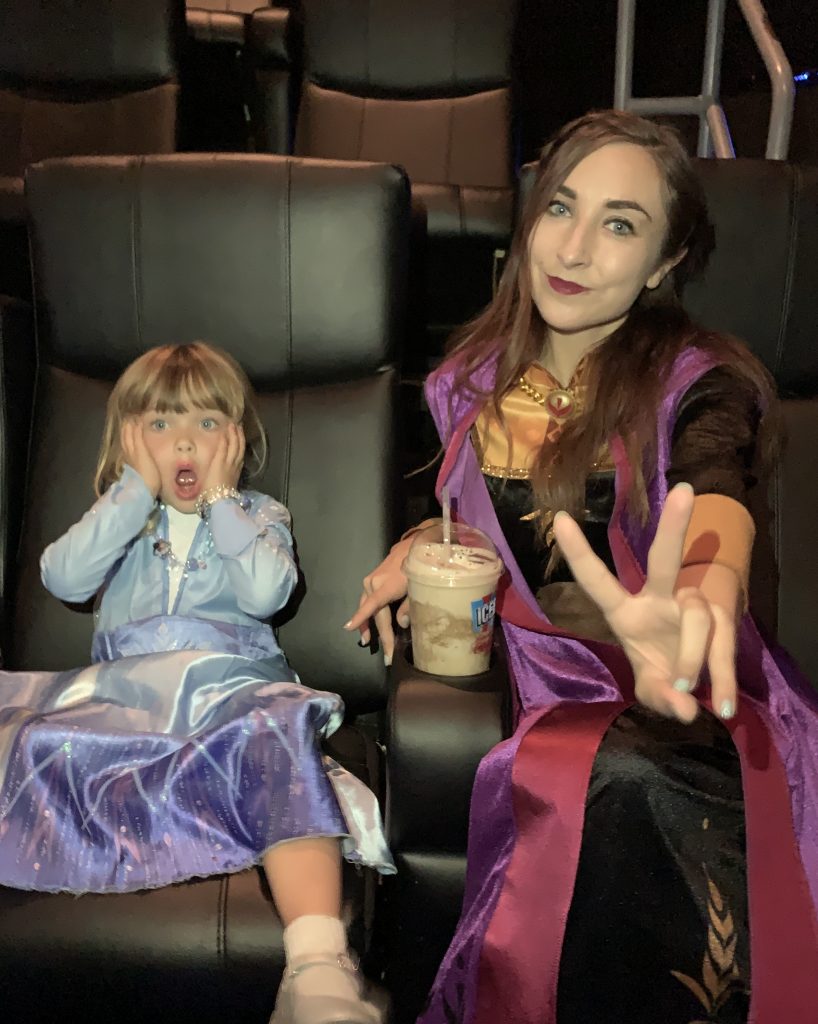 I have always heard about these sorts of things happening, like when Mark Hamill surprised guests at Disneyland riding Star Tours. But I never thought I would be lucky enough to happen to me someday! My daughter recognized his voice as that of Olaf’s, and was very excited! I was able to get some video of the exciting moment (please excuse the shakiness, I was trembling from excitement):

We all absolutely loved Frozen 2! We all actually agreed we like it even more than the first film. Since seeing it, we already want to plan another trip to see it over the week of Thanksgiving. In the meantime, we will keep playing the soundtrack on blast on Spotify! If you are wondering if it would be a good film to take your kids over the holiday season for your own Frozen 2 family night out you can check out the spoiler-free review here on the blog!

You can find tickets to Disney’s Frozen 2 here.