I just recently did a blog post about every way to experience Halloween at Disneyland! Well this weekend, I went to Disney California Adventure, where they are offering seasonal celebrations for both Halloween and Dia de los Muertos. Here are all the ways you can experience them: 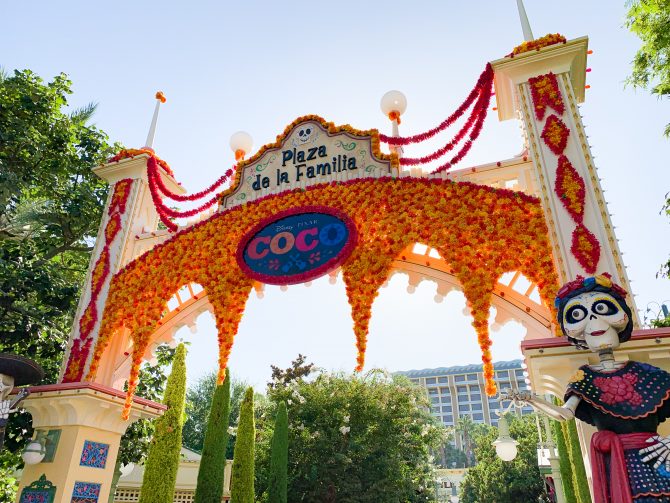 The Musical Celebration of Coco Show

Every day in the area called “Plaza de la Familia” near Goofy’s Sky School, they have a show called “The Musical Celebration of Coco”, which typically occurs on the top of the hour each day from 12-6pm. Always be sure to check the Disneyland App, then go to entertainment to check the showtimes. The show uses an amazing puppet of Miguel, alongside an all-female mariachi band, live singers and dancers to showcase all the songs and tell the story of Pixar’s Coco. 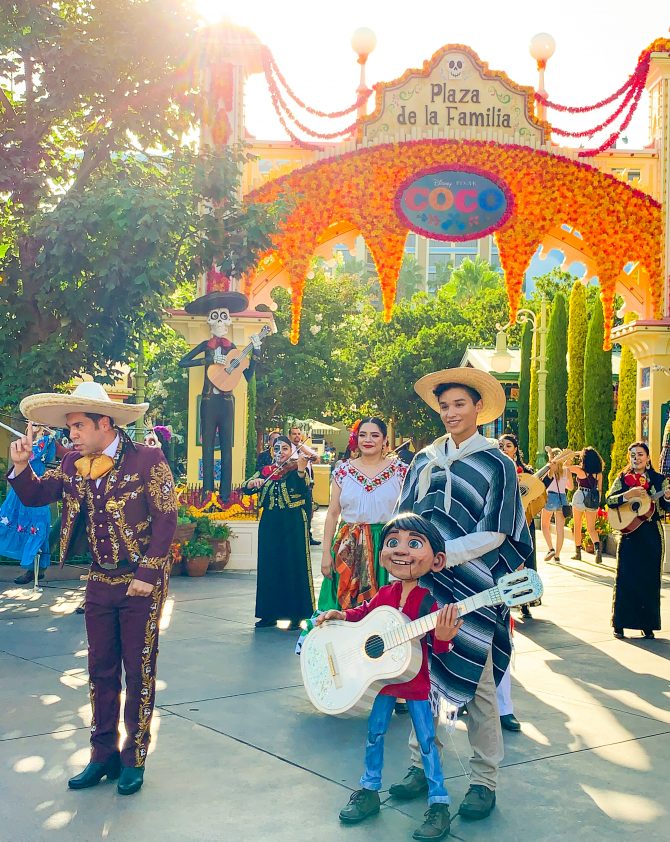 Also in Plaza de la Familia, you can do a meet-and-greet with the Miguel puppet! My daughter loves Coco so was thrilled to do this. The puppet is so lifelike she didn’t even notice the cast member operating him! This meet-and-greet typically happens 45-30 minutes prior to each show. 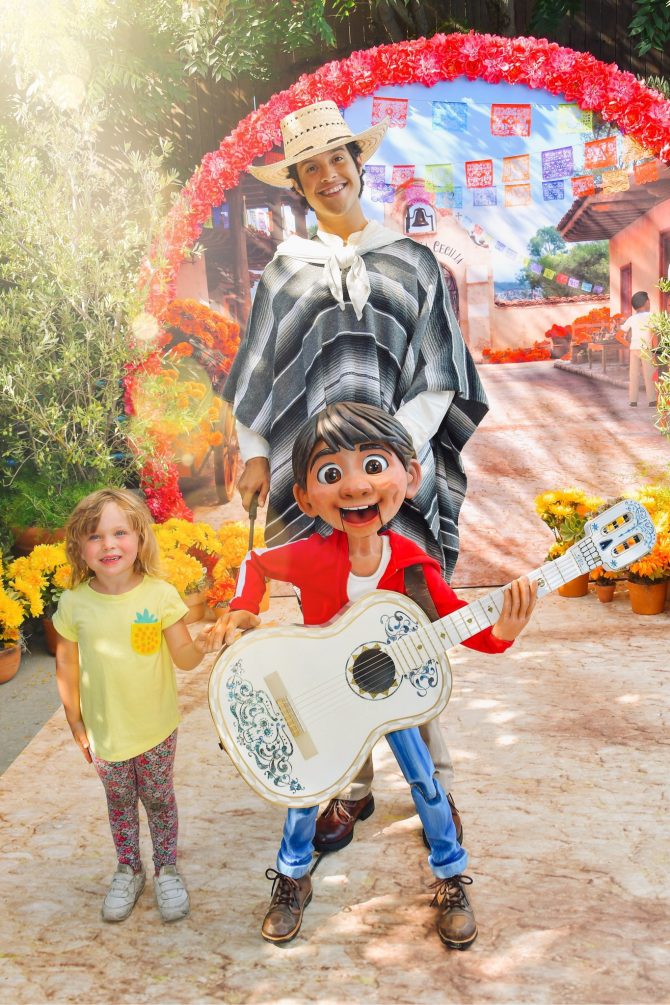 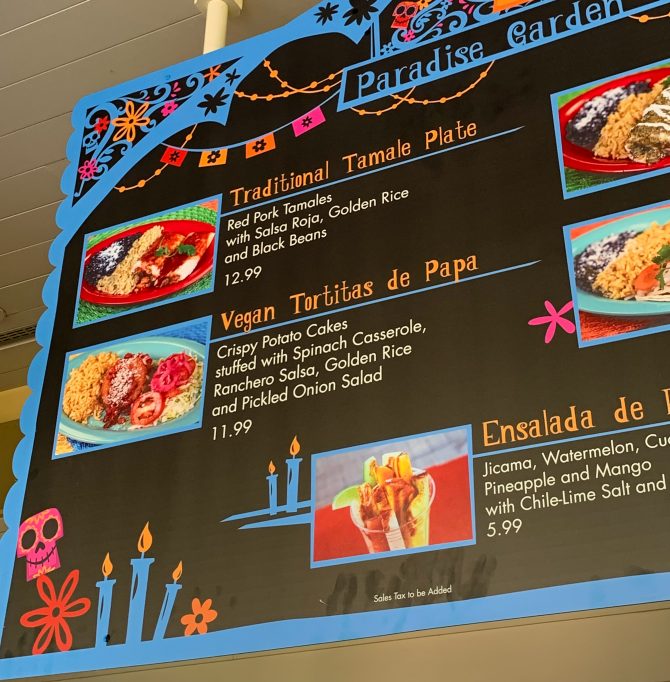 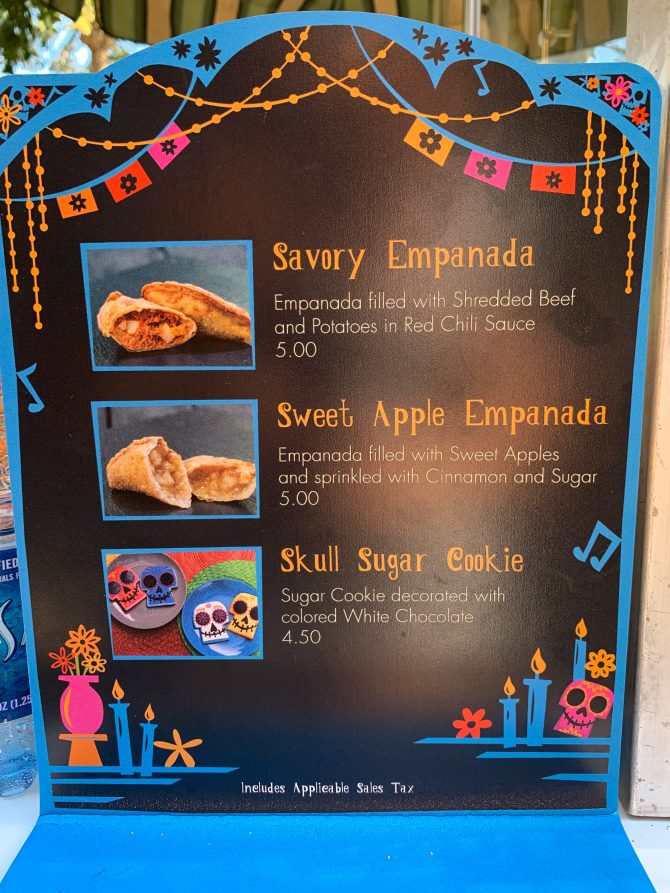 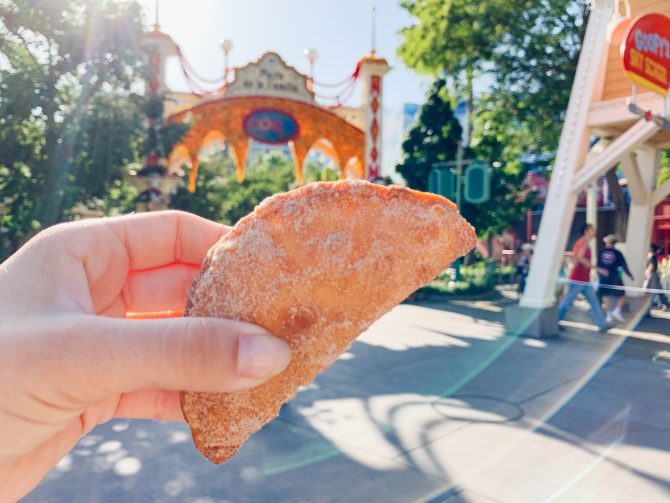 Right by the entrance to Plaza de la Familia, they have a kids activity area, where you can color a Dante or Pepita mask! My daughter did this last year, and with Dante being one of her favorite characters she was super excited for this to return! After you’re done coloring, take a picture with one of two wing walls – they have one for kids and for adults! 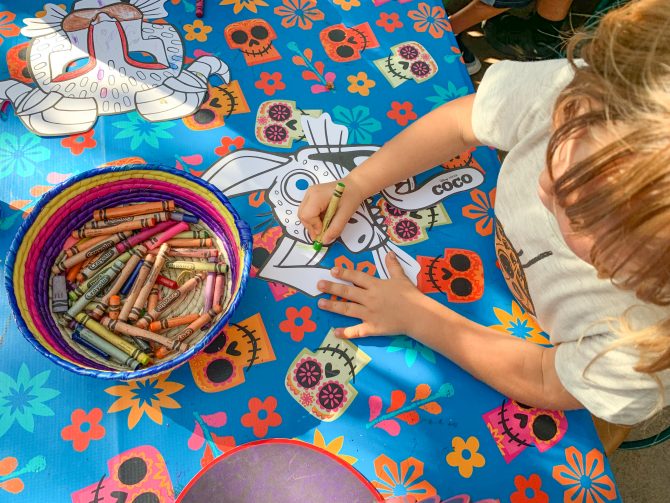 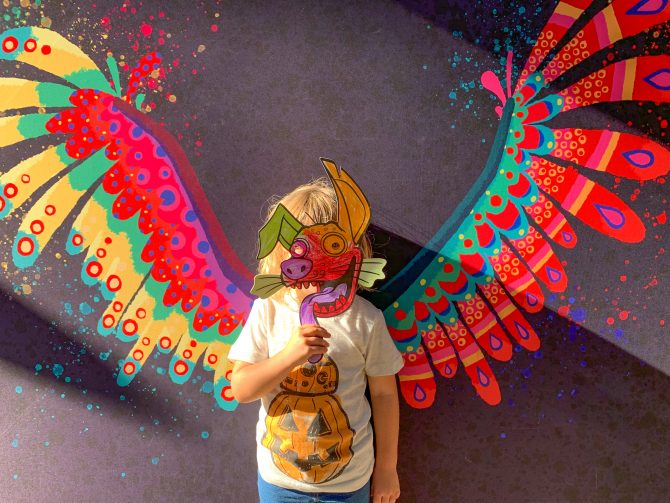 In Hollywood Land at the Animation Academy, they have a different character you can draw every half hour. Added to their schedule until October 31st is Dante and Miguel! The times change each day, so be sure to check out the schedule inside the building for times. 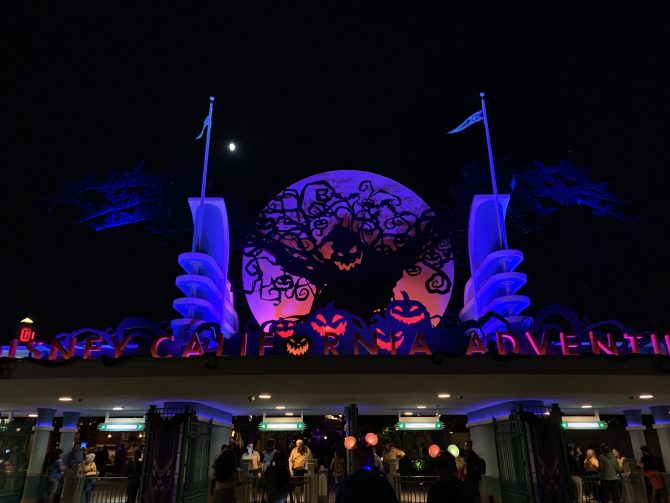 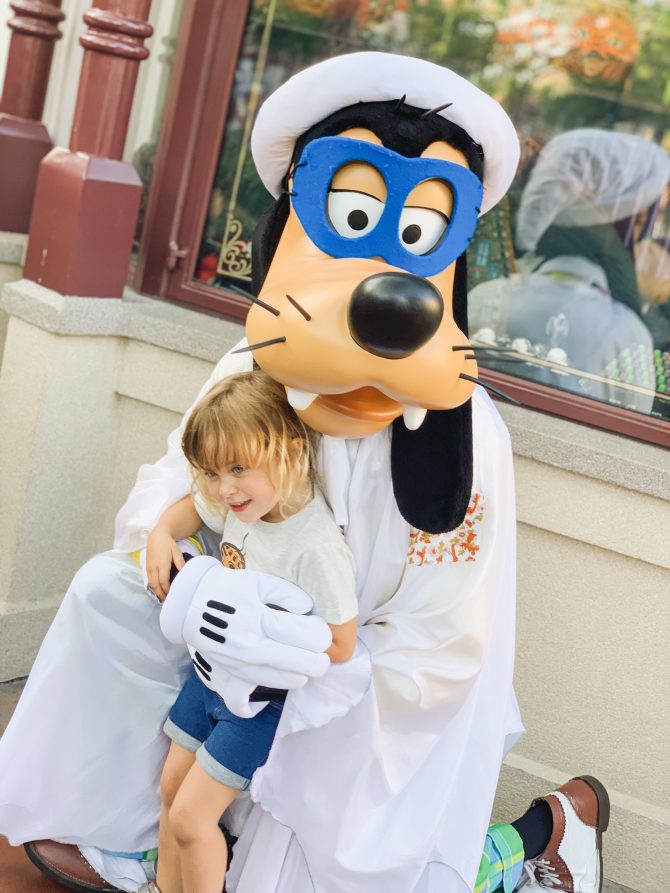 Cars Land is one of the best parts of Halloween at Disney California Adventure! The best way to experience Cars Land in my opinion is at night! Each section of Radiator Springs is decked out in Halloween decor, and Ramone’s is decorated for Dia de los Muertos. Luigi’s Rollickin’ Roadsters and Mater’s Junkyard Jamboree change to have slight holiday overlays, playing Halloween music while you ride. Near the Cozy Cone, you can meet-and-greet with Lightning, Mater and Cruz in their Halloween costumes. 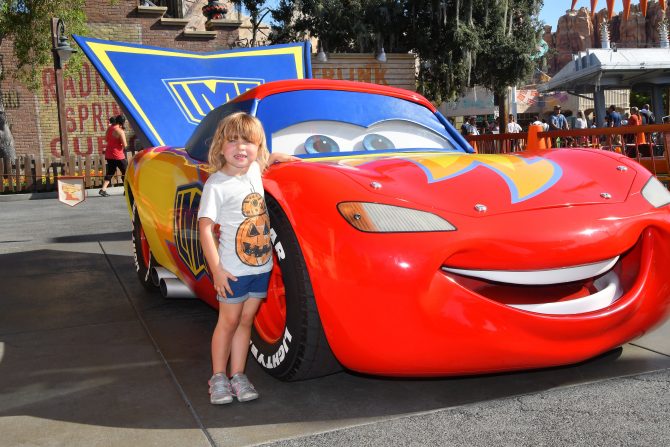 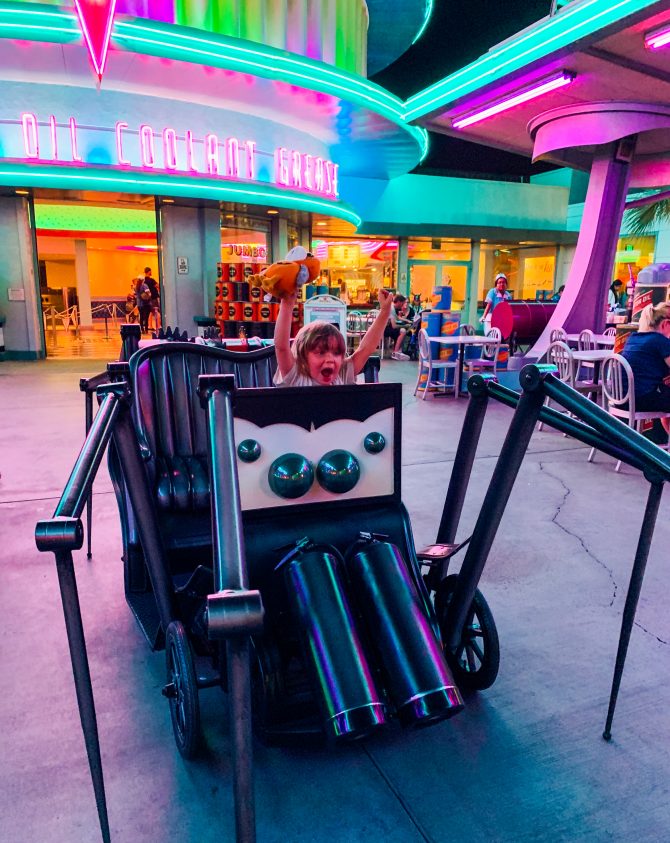 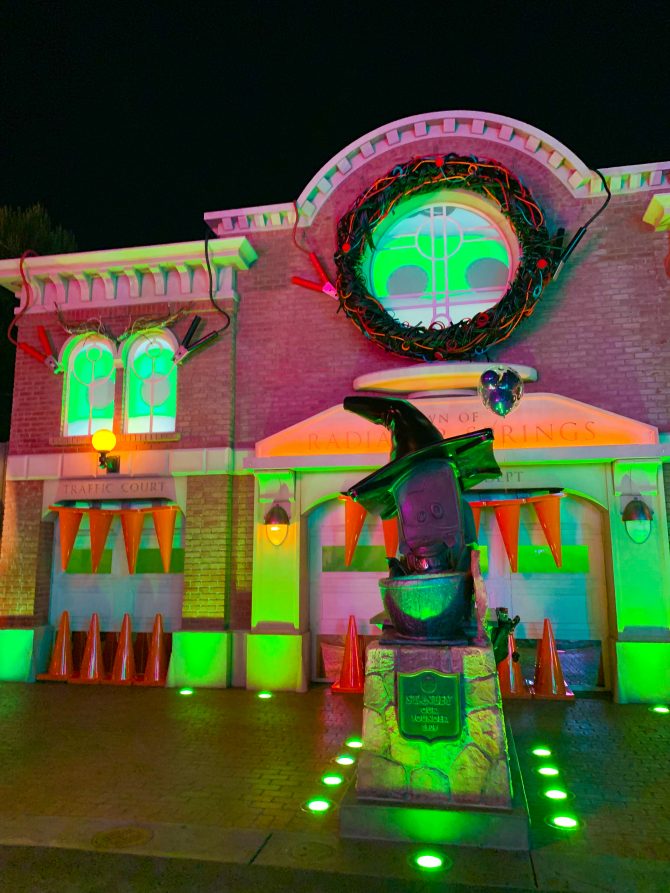 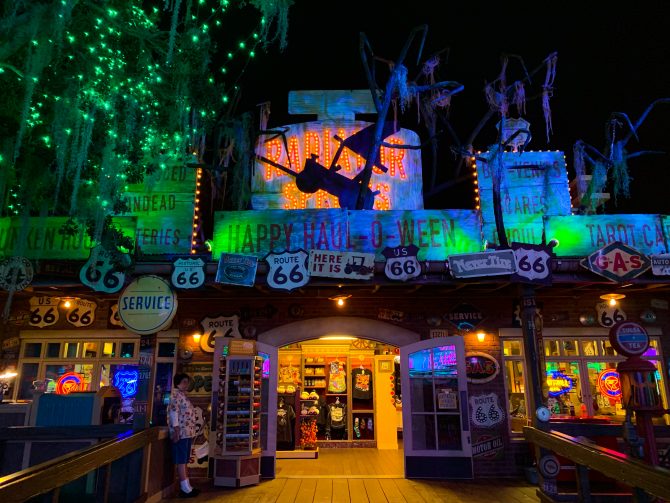 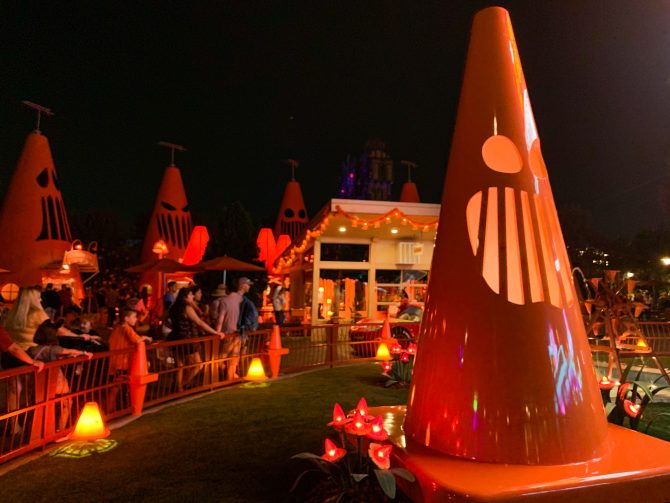 At the Animation Academy in Hollywood Land, you can draw characters from Nightmare Before Christmas (Jack, Sally, Zero, and Oogie Boogie), as well as Donald and Mickey in Halloween costumes! The times vary by day, you can find the characters scheduled each day by checking the schedule board inside the animation building. 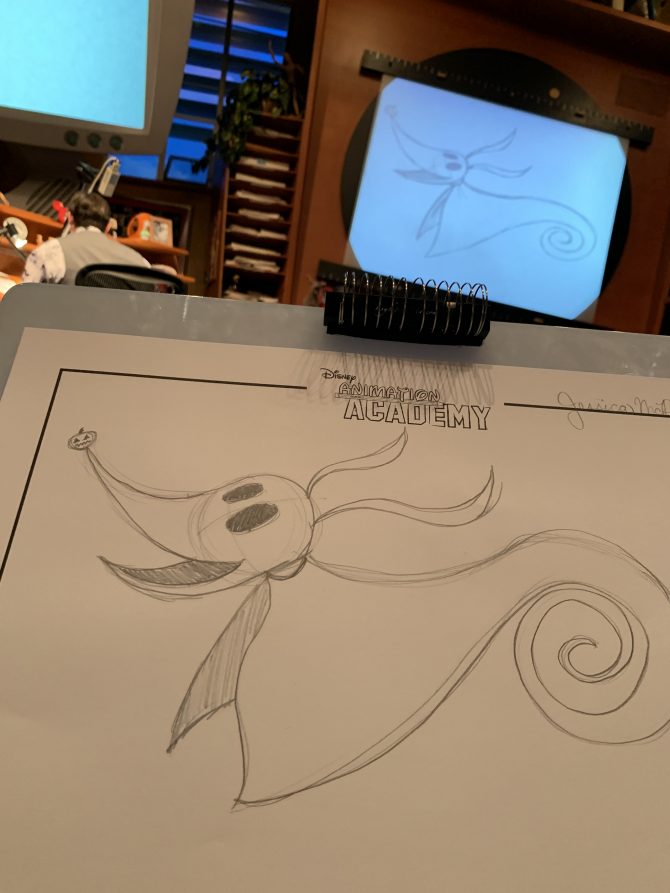 You can also find lots of Halloween merch throughout the park! The two best places I found to get some Halloween items were Elias & Co on Buena Vista Street and the shop in Hollywood Land. Also at the popcorn stands in the park, you can find the purple cauldron AP exclusive bucket that is $20 and comes with $1.50 refills, as well as an $18 Oogie Boogie bucket available for all guests.

Each year the famous Poison Apple-tini returns to Carthay Circle! Even if you don’t have restaurant reservations, you can go to the lounge downstairs which is first come, first serve and sip this amazing martini. Each year, it comes with a poison apple glow cube that is a different color; this year it’s black. New to this year, if you purchase the martini you have the option to purchase the three previous glow poison apples from the last three years for an additional $37! They also offer a seasonal appetizer called Old Witch’s Fingers, which are soft pretzel sticks with an almond on top, that comes with a mustard aioli. 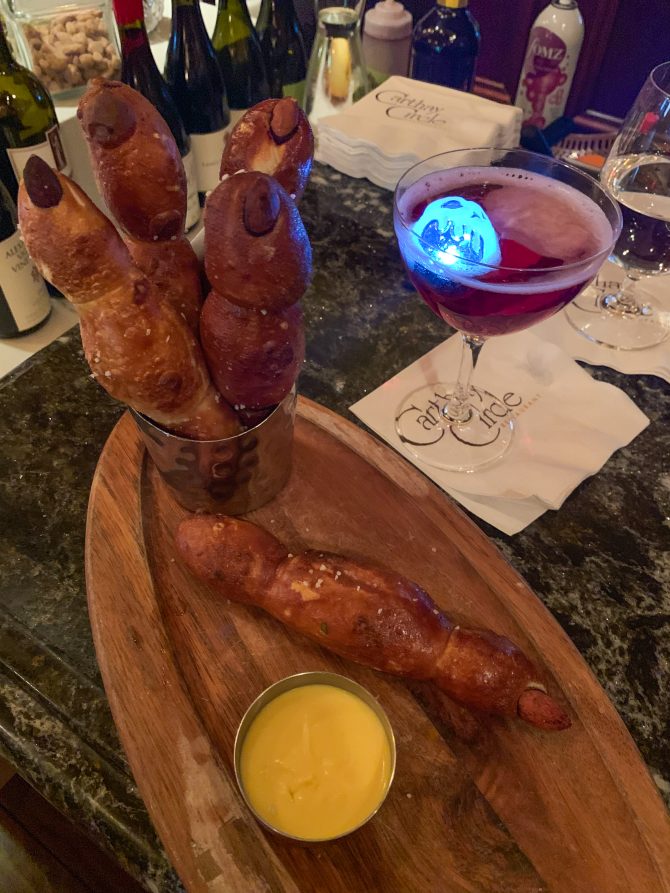 Deals on Vacations to Disneyland Until October 31st

If you’re wanting to visit to enjoy any of the seasonal festivities, there are some great ticket deals, as well as ticket and hotel combo packages on Get Away Today! For example, you can save $30 on 5-day tickets that include Disney MaxPass! You can also save up to 15% off at Disneyland Resort hotels, or find buy 3, get the 4th night free at select Anaheim hotels. Check out all the deals here!