Dole and Disney have two passions in common: helping families be happy and healthy! So naturally, Dole and Disney’s collaboration has been ongoing since 1976, when the Dole Whip launched at the Disney Parks. Then in 2016 in a global initiative to show the fun side of healthy eating, and encourage families to eat more fruits and veggies, Dole started having Disney-branded packaging. You may have noticed in grocery stores beginning with Disney’s 2016 Beauty and the Beast that there was packaging on Dole lettuce, grapes, tags on pineapples, and stickers on bananas themed to the film.

Just in my household alone, I noticed since there being this special Disney packaging over the years, including Mickey Mouse’s 90th Anniversary, Disney and Pixar Incredibles 2 and Star Wars, my daughter has been excited to collect the character stickers from Dole bananas, and is more willing to try salads that have these Disney characters on them! I recently attended the Dole Fall Blogger Summit at the Four Seasons Westlake, where Dole’s wellness test kitchen is located. There we learned more about the impact the alliance with Dole and Disney has had. Since just the first package branding partnership in 2016, over 9 billion servings of fruits and veggies have been enjoyed from the Disney branded Dole produce. Dole’s chefs have also worked with Disney to create recipes that are family friendly, that meet Disney’s nutritional guidelines. These recipes have a special symbol on them, called the “Mickey Check.” Mickey Check products have grown in familiarity with consumers, with 1 in 3 Dole consumers now familiar with Mickey Check! 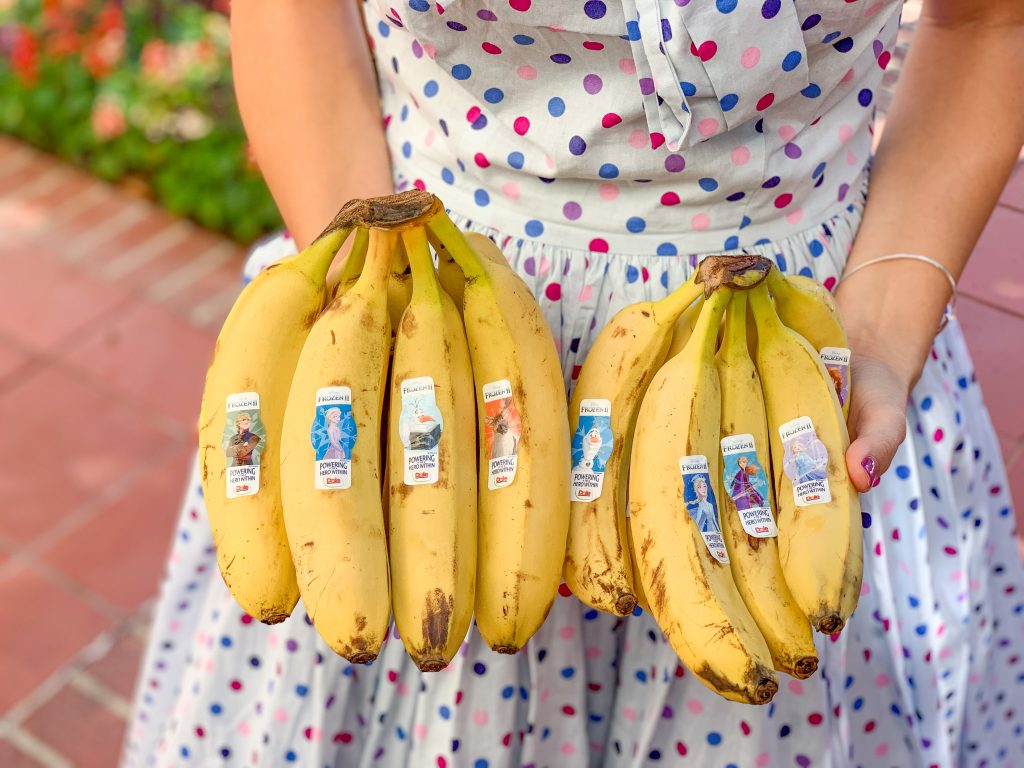 Having created my blog out of my passion for both healthy living and Disney, I was thrilled to see both Dole and Disney taking such big steps in helping create healthy families, educated about nutrition, and make healthy eating appealing and easy for families. Dole’s latest healthy-living initiative is inspired by Disney’s Frozen 2.

At the Dole Fall Blogger Summit, we got to be among the first to taste the Frozen 2-inspired recipes developed by Dole, that meet the Mickey Check nutritional guidelines! Having these recipes packed with fruits and veggies inspired by Disney characters always gets my daughter excited! The Frozen 2-inspired recipes were incredibly tasty, and perfect for autumn and winter! The ones we got to try at the summit were the Olaf Carrot Smoothie Bowl and Sven Sleigh-Pulling Power Smoothie. 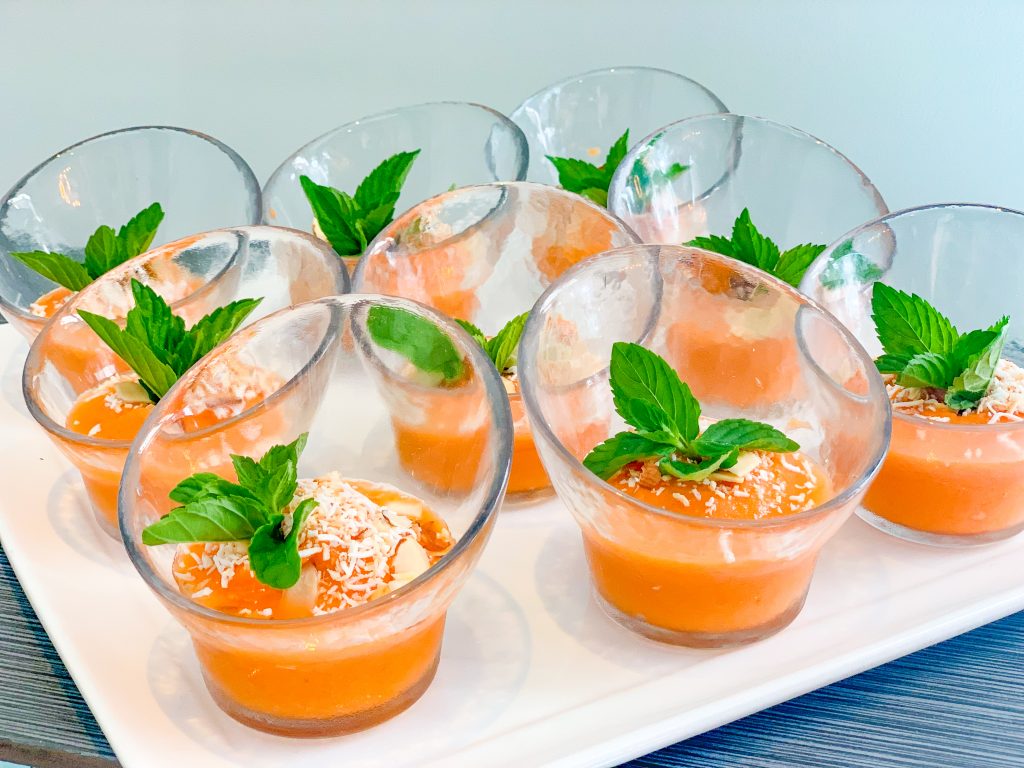 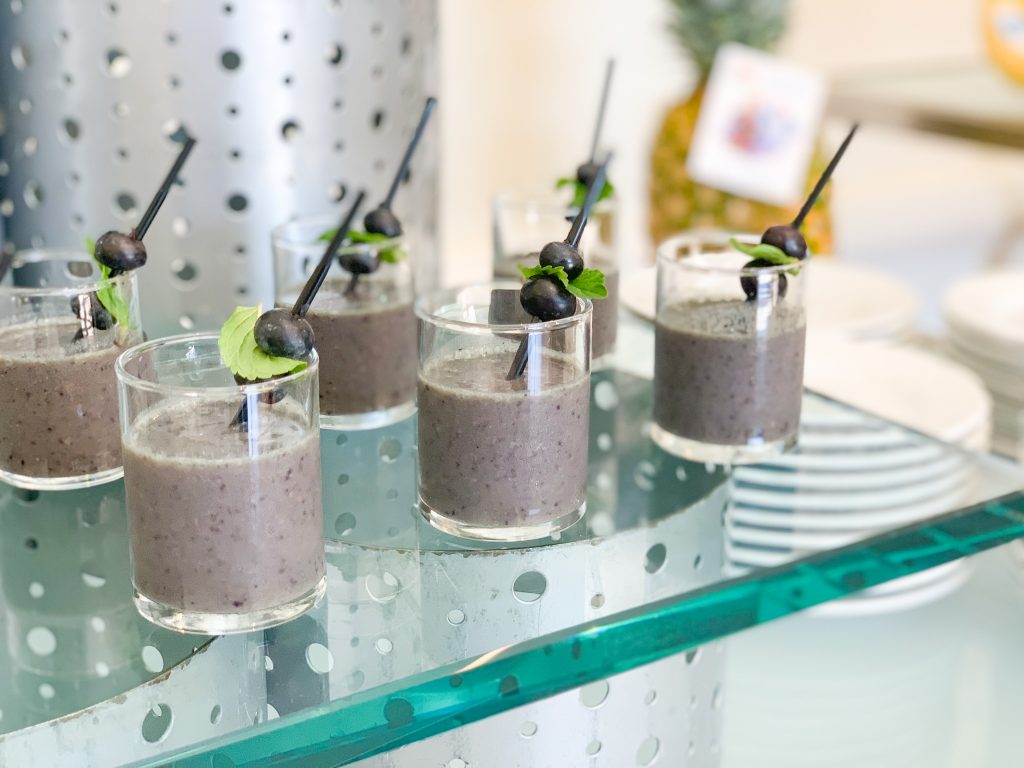 I also tried two very comforting vegetarian favorites, the Gluten-Free Veggie Pasta Bake and the Enchanted Forest Sweet Potato Cardamom Pie. I think I’m going to be creating a lot of the Dole recipes inspired by Disney’s Frozen 2 for Thanksgiving this year! You can find all of the recipes (with more to be added to the site soon) here! 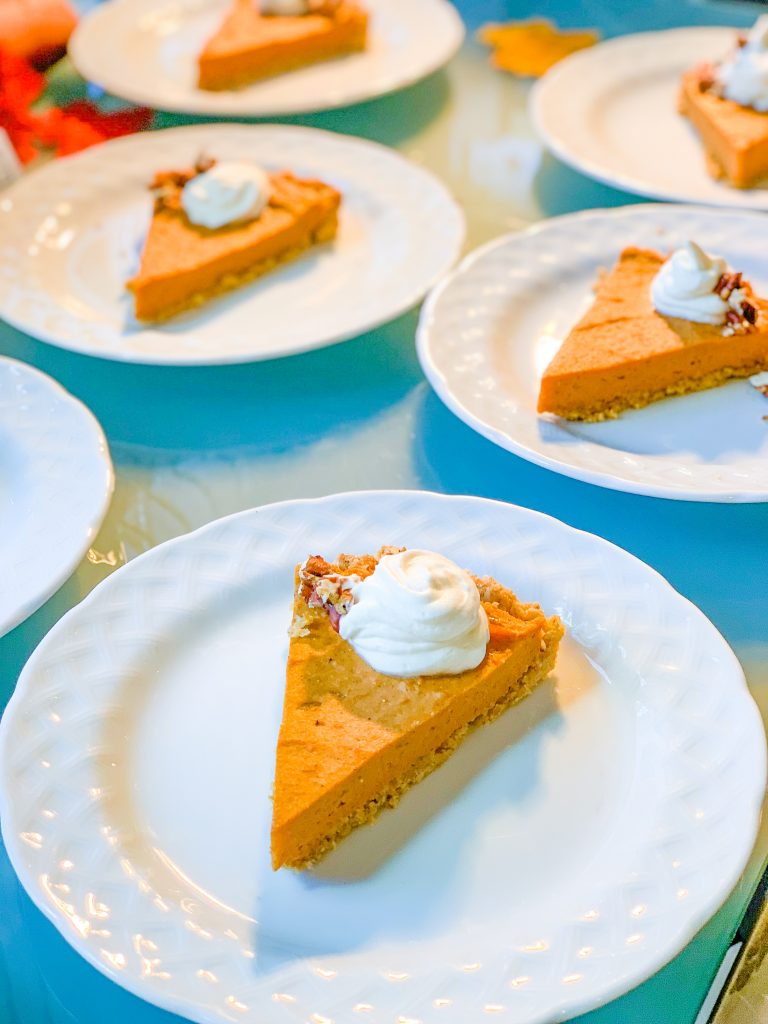 At the closing of the blogger summit, we did Frozen trivia. Being a Disney movie and history buff, I love trivia so was very excited for this! Before leaving, I ended up winning the trivia, with a prize that included DOLE® produce Frozen 2 packaged produce and a set of Nordic Ware Frozen 2 bakeware! The cute Frozen 2-inspired bakeware inspired me to make one of the new Dole’s new Disney’s Frozen 2 recipes: D-Olaf Orangesicle Pancakes! 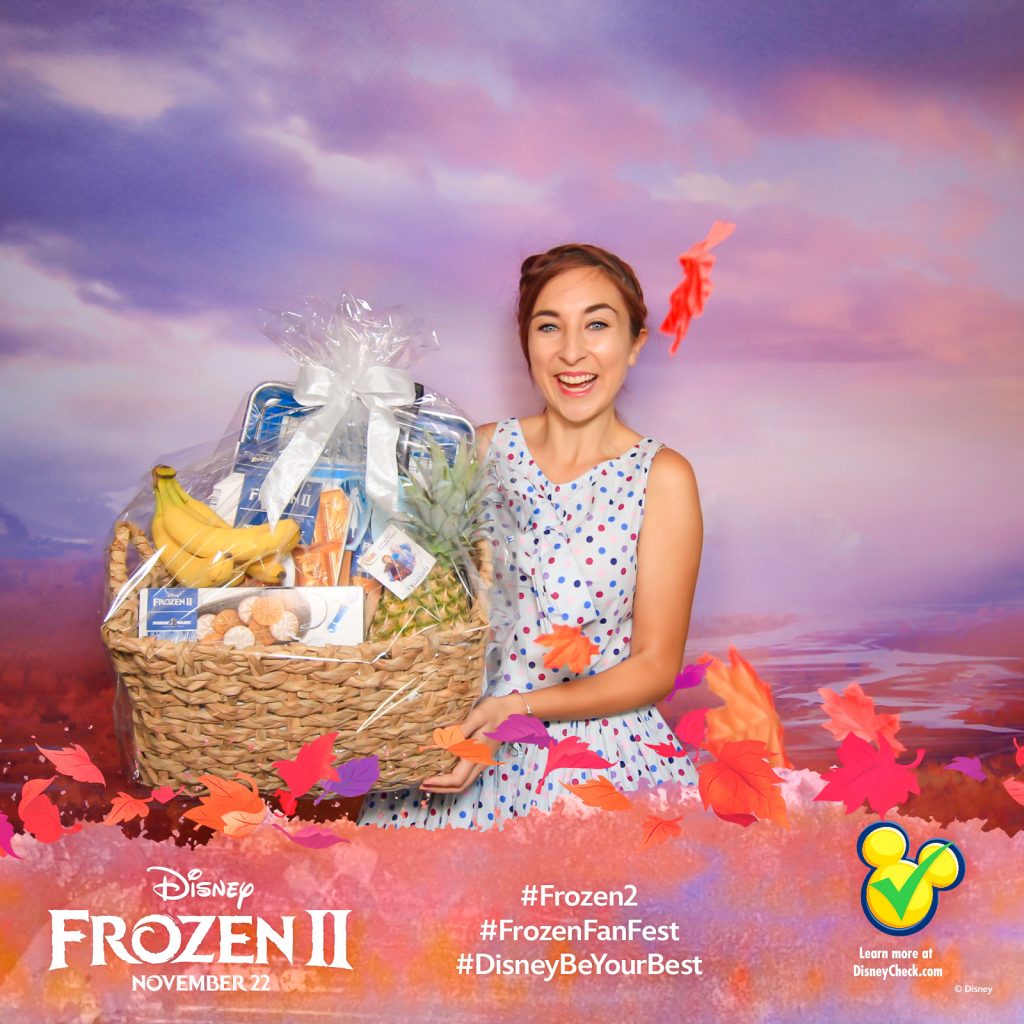 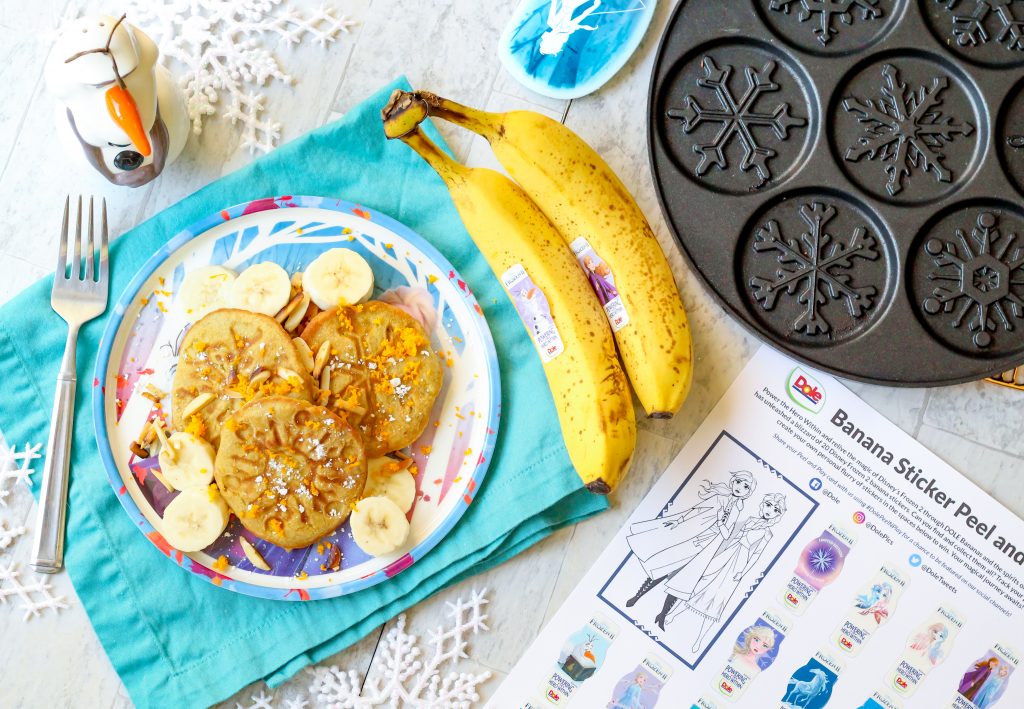 The pancakes were incredibly soft and fluffy, with a nice subtle orange taste! And they met both the adult Disney fan taste test, and most importantly my toddler approved them! A fun activity you can do at breakfast time while enjoying this nutritious Disney’s Frozen 2-inspired pancake recipe is the Banana Sticker Peel and Play sheet! 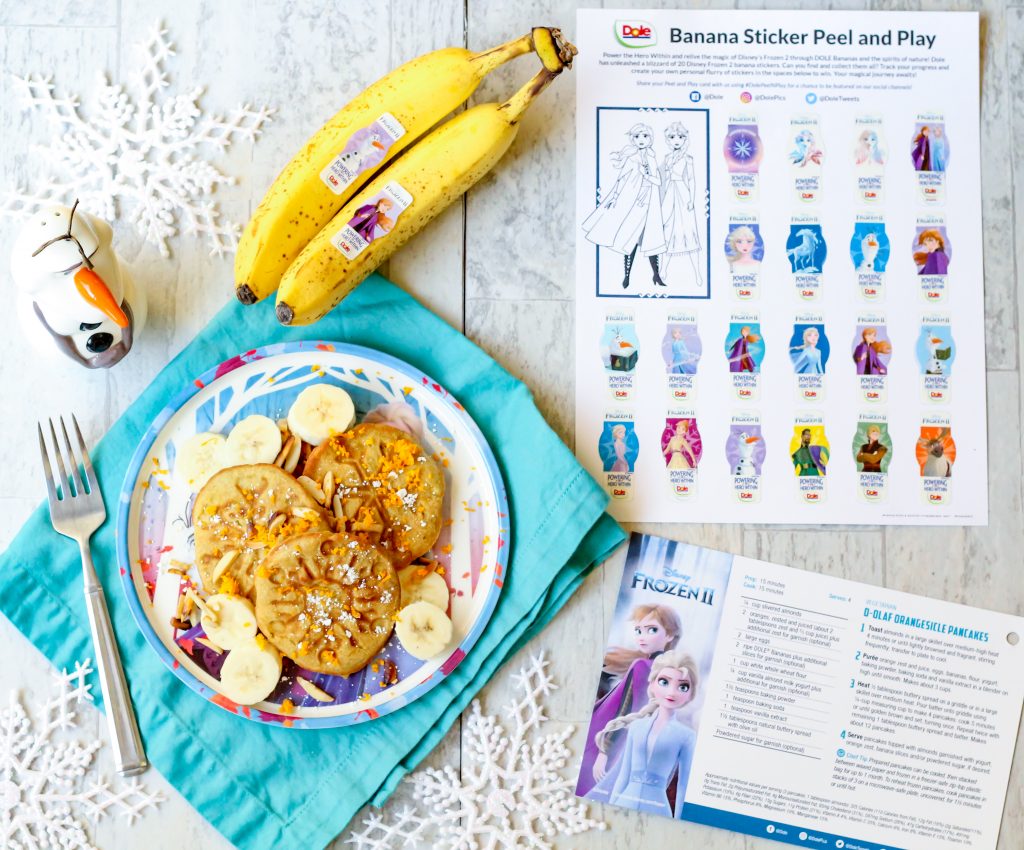 On Dole’s website, you can download and print these sheets for free. There is a spot for each Disney’s Frozen 2 character sticker you can find on DOLE® Bananas in-store. You then take the stickers off your bananas and place them on the play sheet to collect them all! This is one of the initiatives with the Dole and Disney partnership that encourage kids to choose fruits and veggies to eat, and make healthy eating fun! 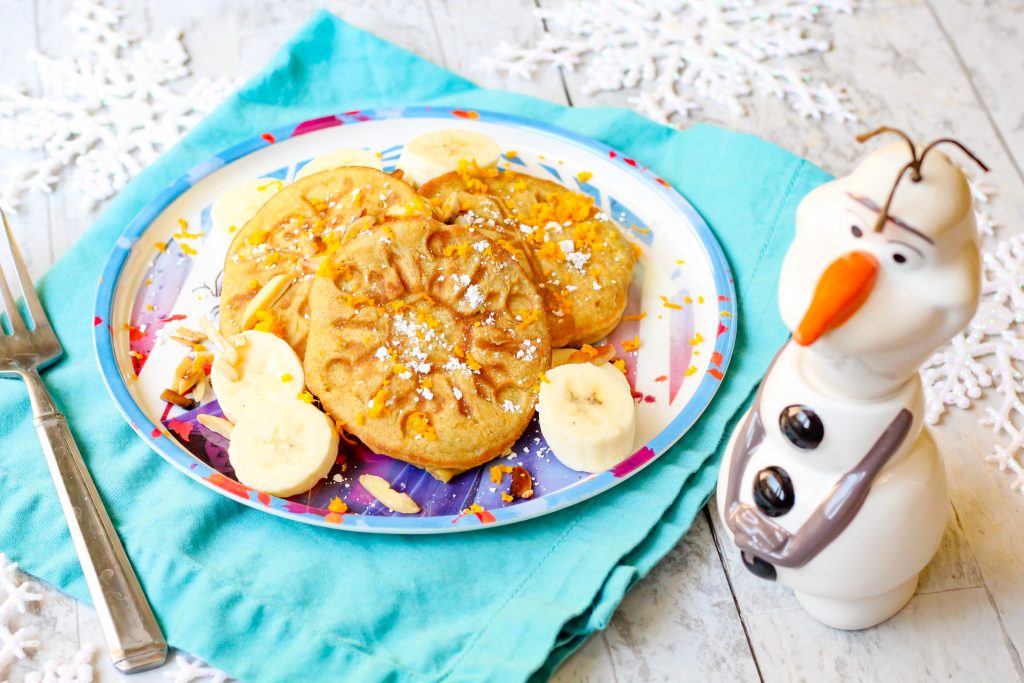