Disclosure: I was hosted at this event, but all thoughts and opinions are my own.

As a Californian, I’ve attended a couple Disneyland After Dark events. I had never done an after hours event at Walt Disney World, so was incredibly excited to get to experience my first one when I was at Walt Disney World Resort this past weekend: Disney Villains After Hours at Magic Kingdom. This is a new recurring after hours event at Magic Kingdom park, which will run on select dates through August 8th (see the complete list of available dates here),and is from 10pm to 1am. I had a fabulous time, and wanted to share what you can expect to experience during the event, is it worth the ticket, and everything you may need to know!

During the After Hours events, select attractions are open. Including Seven Dwarfs Mine Train, Haunted Mansion, Big Thunder Mountain Railroad, Splash Mountain, and more. If you are bringing young kids, many of the toddler-friendly attractions were open too, including the Carousel, Peter Pan’s Flight, and Jungle Cruise for example. 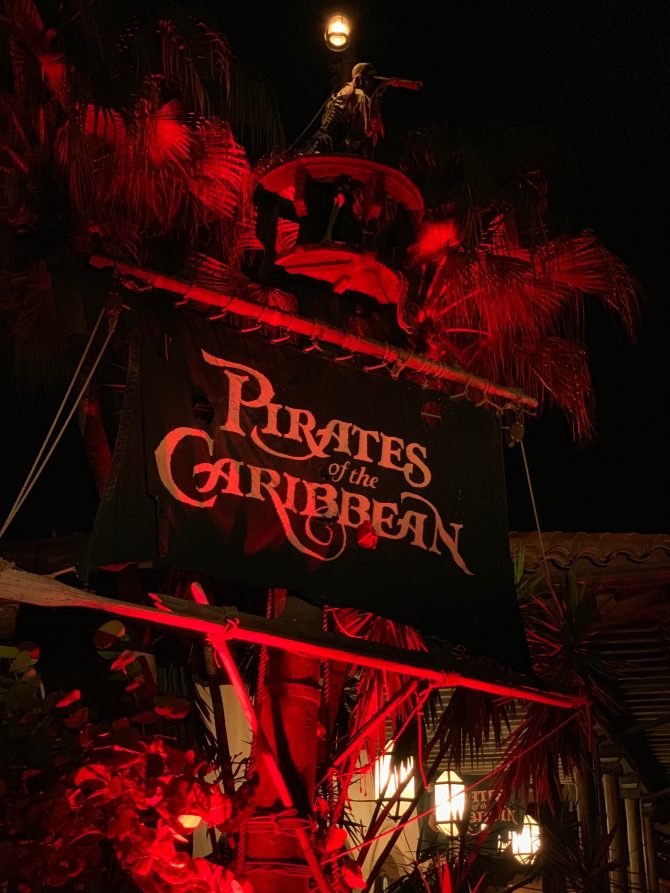 Two of the attraction highlights that added an extra element of fun were two themed overlays you can experience during Villains After Hours. One was on Space Mountain and one on Pirates of the Caribbean. On Pirates of the Caribbean, they had actors dressed as pirates interacting with guests in the queue line, and they had an actor as Captain Barbosa in the actual ride. It really felt immersive and was a great experience!

With so many attractions open during the After Hours, it gives guests a great opportunity to experience more rides than during regular operating hours since the lines are much shorter. You can make it a fun scavenger hunt with your friends and family to go on attractions that feature villains to play along with the theme (spotting Zurg on Buzz Lightyear’s Space Ranger Spin, Captain Hook on Peter Pan’s Flight, and the Evil Queen on Seven Dwarfs Mine Train for example.

Another big draw to attend the Villains After Hours at Magic Kingdom are the snacks! Your admission ticket comes with complimentary popcorn, ice cream, and beverages from the snack carts throughout the park. If you were going as a family, that would come in handy to be able to have those complimentary snacks and treats! You can also find special treat and beverage items available for purchase that are Disney Villain themed. I tried Hades Temptation, and it was pretty tasty! And refreshing on a humid evening. 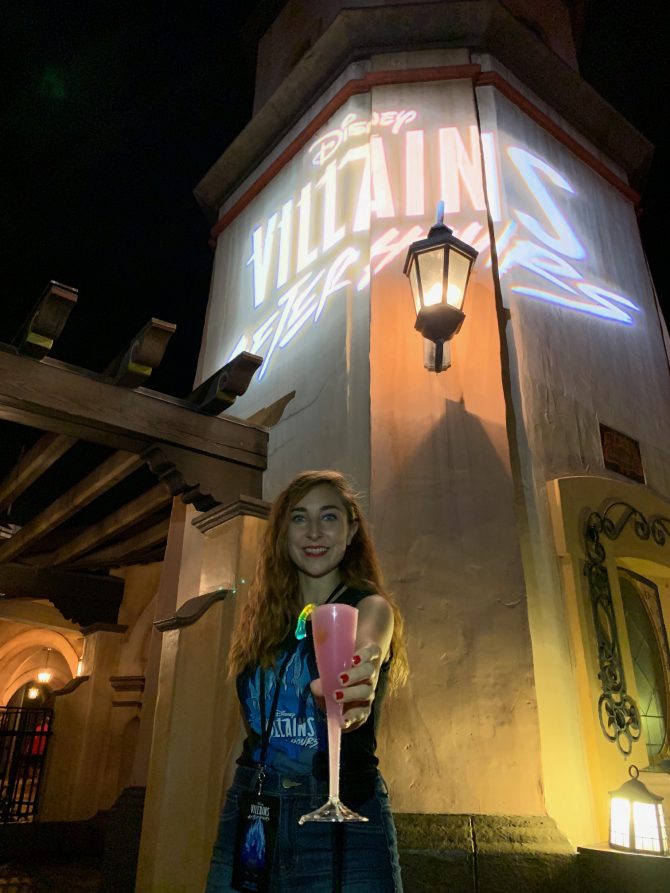 The Hades Temptation from Tortuga Tavern in Adventureland 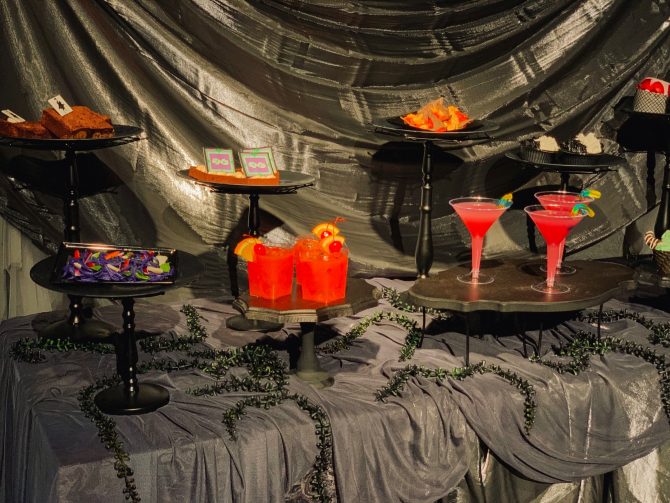 Shows and Other Attractions

One of the most memorable parts of my night was seeing Maleficent at Night! The amazing steampunk style Maleficent float from the Festival of Fantasy Parade at Magic Kingdom comes out at night and goes through Frontierland, Liberty Square, and Main Street. Seeing Maleficent as the dragon breath fire in the night with the castle in the background (complete with special villain-themed projections) is a magical site that any Disney Villains fan would love! It happens three times a night at 10:40pm, 11:45pm, and 1:20am. 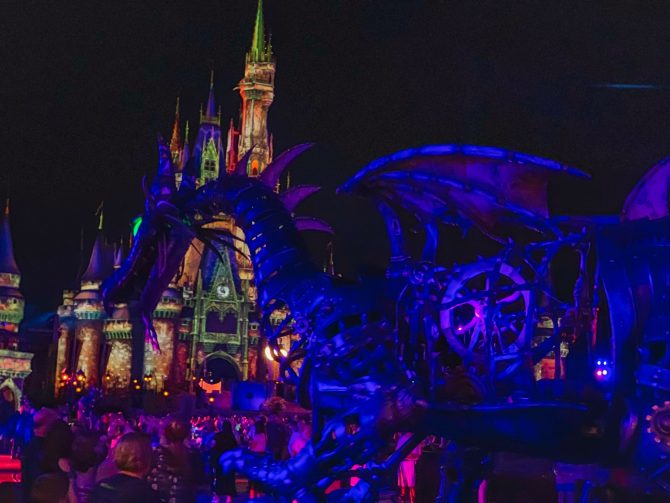 They also have a special night time show on the Cinderella Castle stage called “Villains Unite the Night.” The main characters are Hades and Meg. Meg is one of my favorite Disney characters, so I loved that the show featured her so much. Also in the show, you can see the Evil Queen, Jafar, Maleficent, and Dr. Facilier. The castle also features different projections for each villain, which was my favorite part of the show! They have three showings a night, 11pm, 12am and 1am. 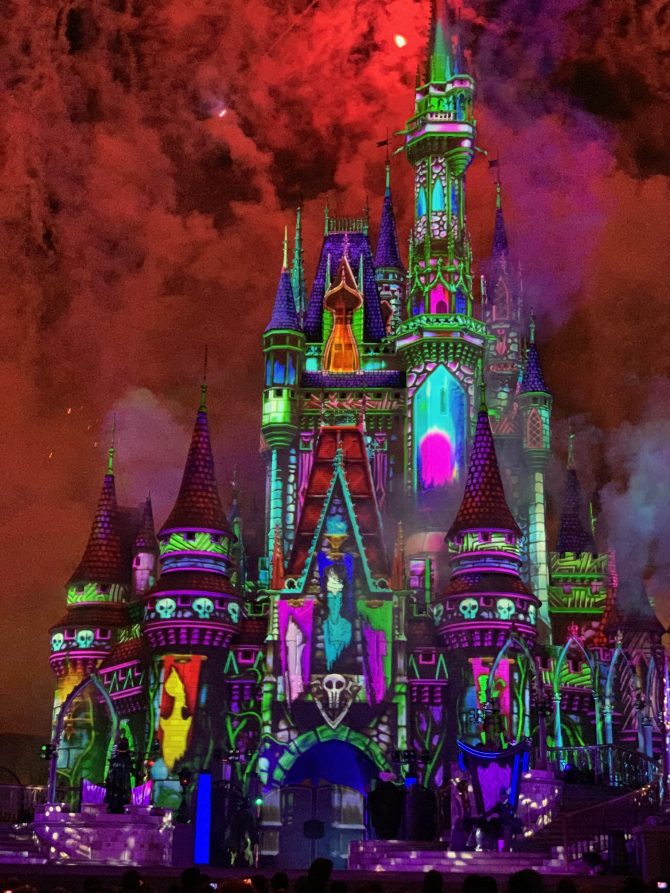 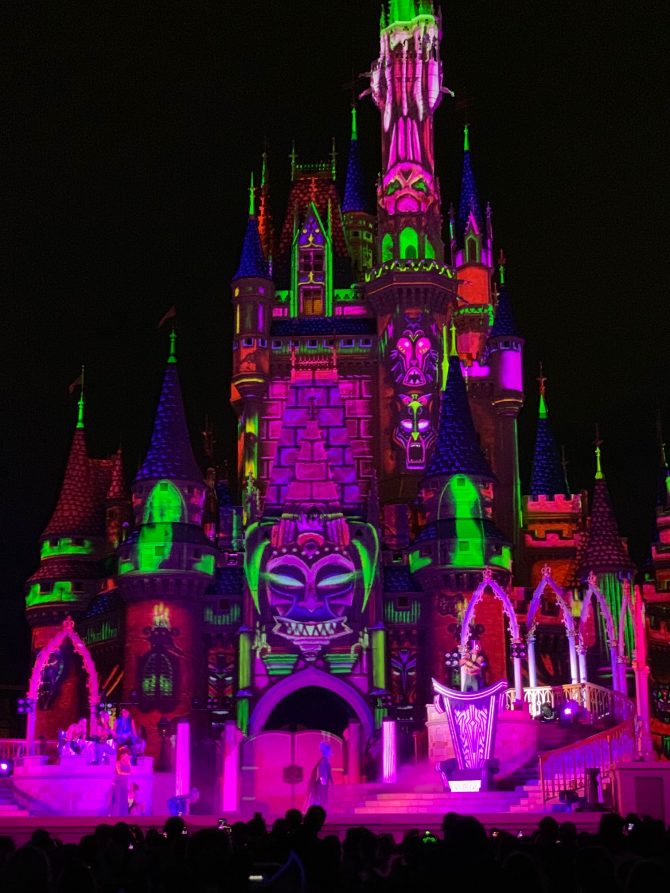 If you love collecting special event merchandise like I do, you’ll love the merchandise offerings at Villains After Hours! In select stores throughout the park you can purchase t-shirts, tank tops, Tervis cups, phone cases, hats and more with the Villains After Hours logo, featuring Hades. I got the tank top – I absolutely loved the sleeves and the soft material. 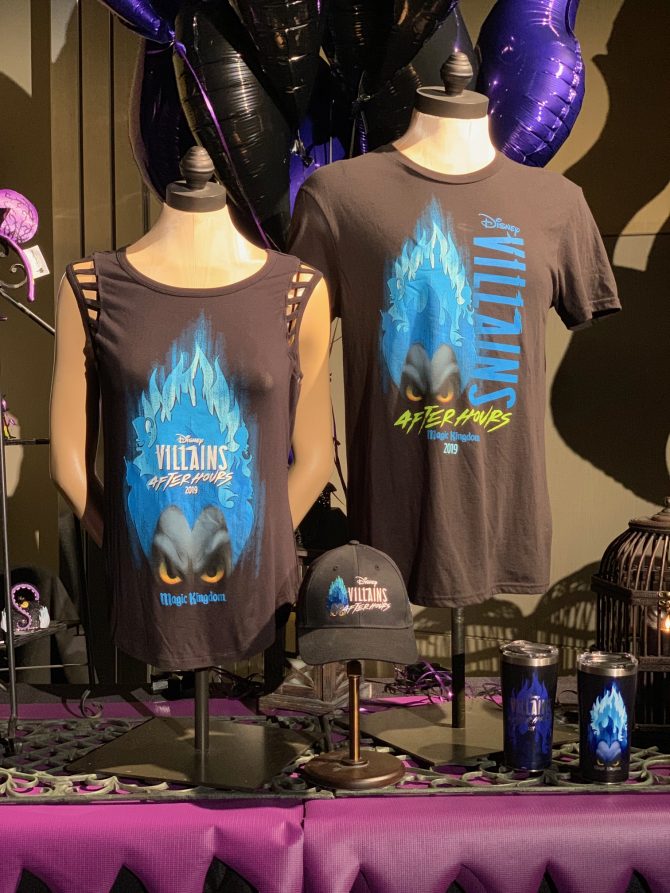 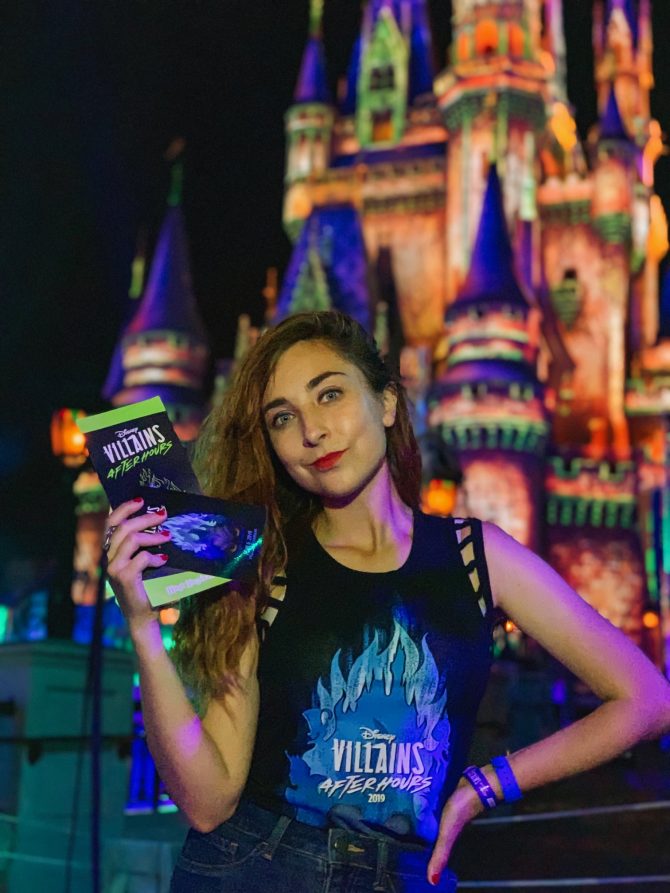 Also throughout the park were Disney Photopass photo opportunities, where they would insert villains such as Oogie Boogie and Scar in your photos. You can get your digital downloads on the My Disney Experience app or from Memory Maker which is located inside Town Square Theater.

Is the Experience of Disney Villains After Hours at Magic Kingdom Worth the Ticket?

The short answer to this question is: Yes! My take on it is it is well worth the admission price for the three hour event. While it is only three hours, you can ride more rides in a shorter amount of time than during regular hours due to a lighter crowd equalling MUCH shorter lines! I know my daughter gets stressed standing in long lines, so if she were with me that would have been a huge plus for us going with kids! The overlay to the rides added a level of immersiveness which I thought was a special memory, and would love to do it again. Not only do you get lighter crowds and shorter waits, but the complimentary popcorn, ice cream, and beverages from snack carts are a huge savings. 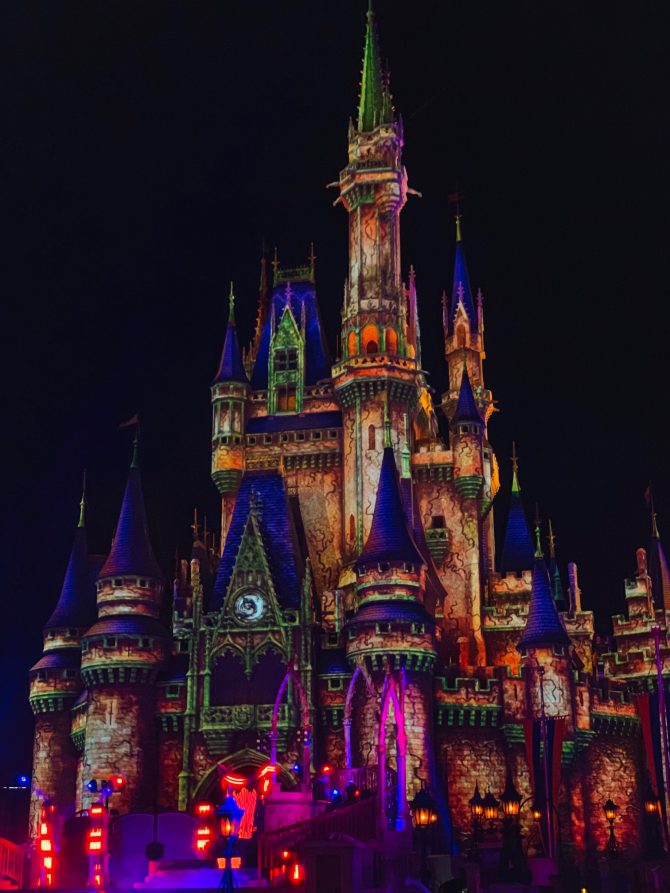 Another thing I wanted to address, since I know many of my readers have young kids like I do, is if it’s good for kids. Aside from the free snacks and kid-friendly attractions that are open, I felt it would be a great fit for kids. It felt very fun, and not at all scary. The villain show was dazzling and not too intense for sensitive kids. Although I didn’t ride Space Mountain, I did hear that it is pitch black during the overlay. That may be one to skip with young kids, but everything else was very family friendly! 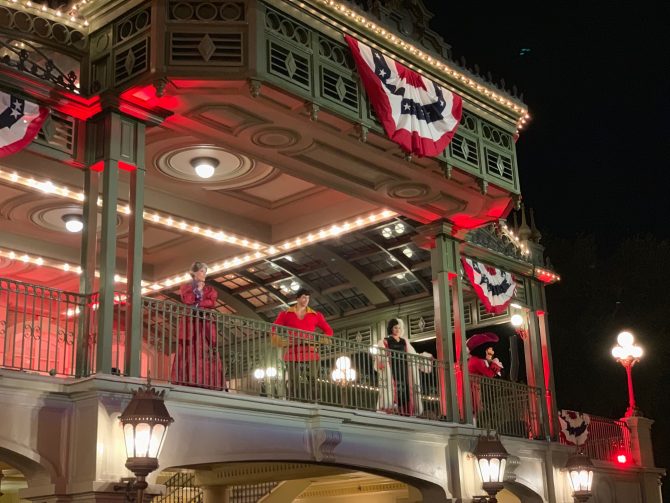 The experience of seeing the castle with special Disney Villain projections, as well as seeing the Maleficent dragon float roam the streets at night was so spectacular. As a lifelong Disney fan, that was such a priceless moment. Then ending your night walking through a quiet yet gorgeously lit up Main Street was beautiful. As our little “Good Night’s Kiss”, waiting at the train station to say goodbye as guests left, Cruella, the Evil Stepmother, Gaston, and Captain Hook were there! They were acting with one another and doing some really funny interactions, and was a fun surprise as we left! You can learn more information about Villains After Hours at Magic Kingdom in Walt Disney World as well as get tickets here. 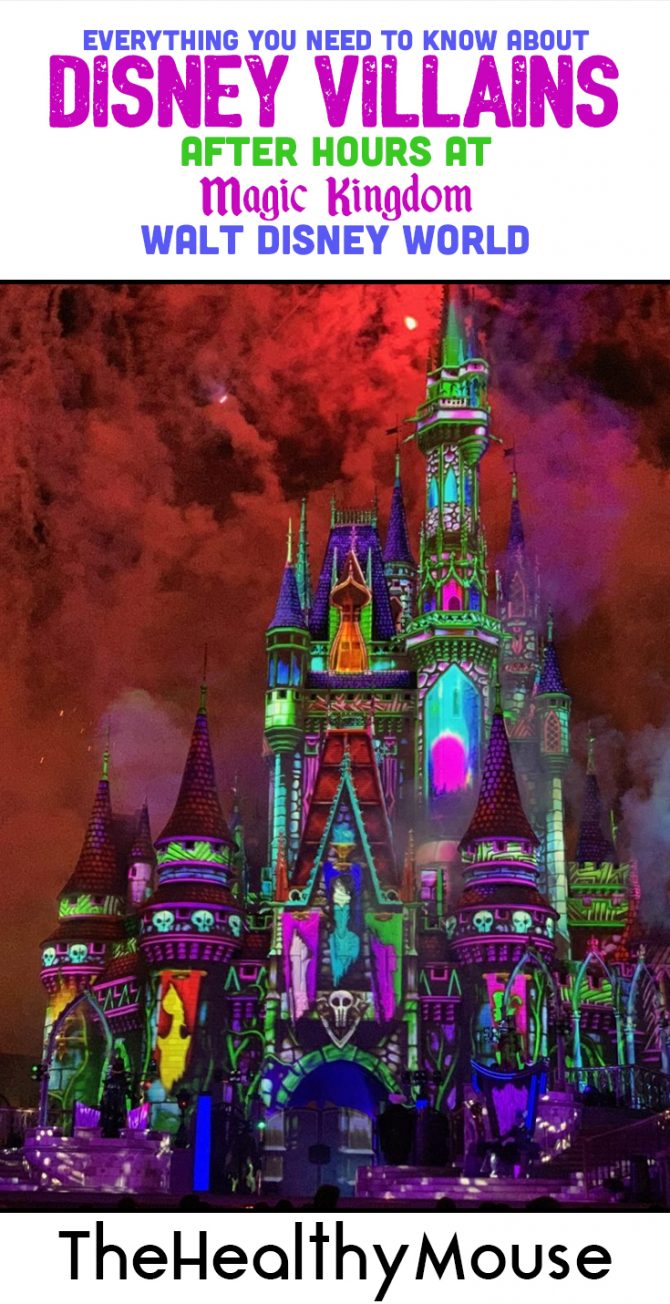