Tips For Going to Disney Alone With a Toddler

My tips for going to Disney alone with a toddler

I am no stranger to the ins-and-outs of Disneyland, having been a passholder for eleven years, a past cast member, and raised in Anaheim. However, having just had my first child twenty months ago, I was completely new at doing Disneyland with a child. When my daughter was under one year old, it was a bit easier. She wasn’t walking around super well, so I could just throw her in the carrier and go wherever we pleased, and she was a happy camper!

Now that she is an active toddler, it is a whole new ball game. And I’ll admit, there was a few months-long period I wouldn’t utilize my annual pass because it was too difficult to go with her. Being a bit heavy for the carrier, too impatient to wait in lines for rides, incredibly active, needing solid food snacks to be packed, and occasionally having tantrums often equaled a recipe for a Disney trip disaster!

This was quite difficult for me, since I love Disneyland more than any other place, and I am paying for a Disneyland pass. Instead of just sitting at home with my daughter, I wanted to be able to expose her to some Disney magic during the week, and create special mother-daughter moments with her.

So if you’re like me, a passholder who wants to have the confidence to go to the Disney parks on your own with your toddler, here are some tips that have helped me:

Skip (Most of) the Rides 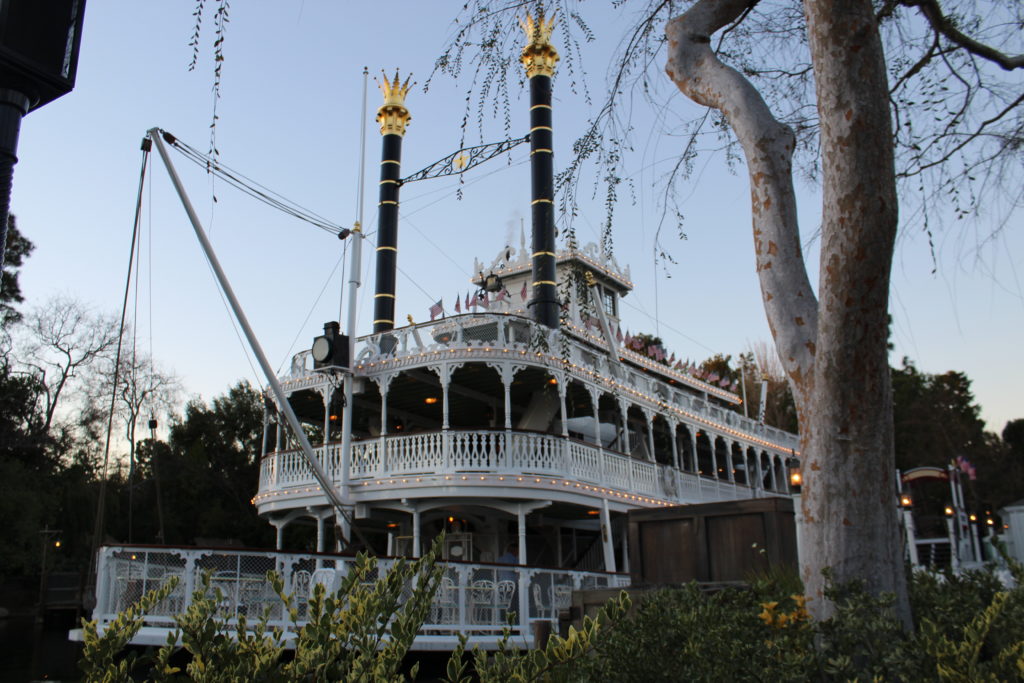 Going on the Mark Twain is one of my favorite things to do with my toddler who hates waiting in ride lines!

When we go to Disneyland or Walt Disney World, it’s easy to feel the sub-conscious need to try to get on the rides (because, they’re awesome). But waiting in lines (event ten minute ones) would result in my toddler being an impatient mess, and making me feel worn out quickly. Although it can seem disappointing to skip the rides, if you go into the parks intentionally knowing you aren’t going to try to go on any, it makes it easier than going in, trying to wait in line, and have it not work out. There are a few rides that typically don’t have any lines, like the train, the Tiki Room, and the Mark Twain, and occasionally the carousel though that are great to go on (and gives you a chance to rest your feet).

Stop and Look at the Details 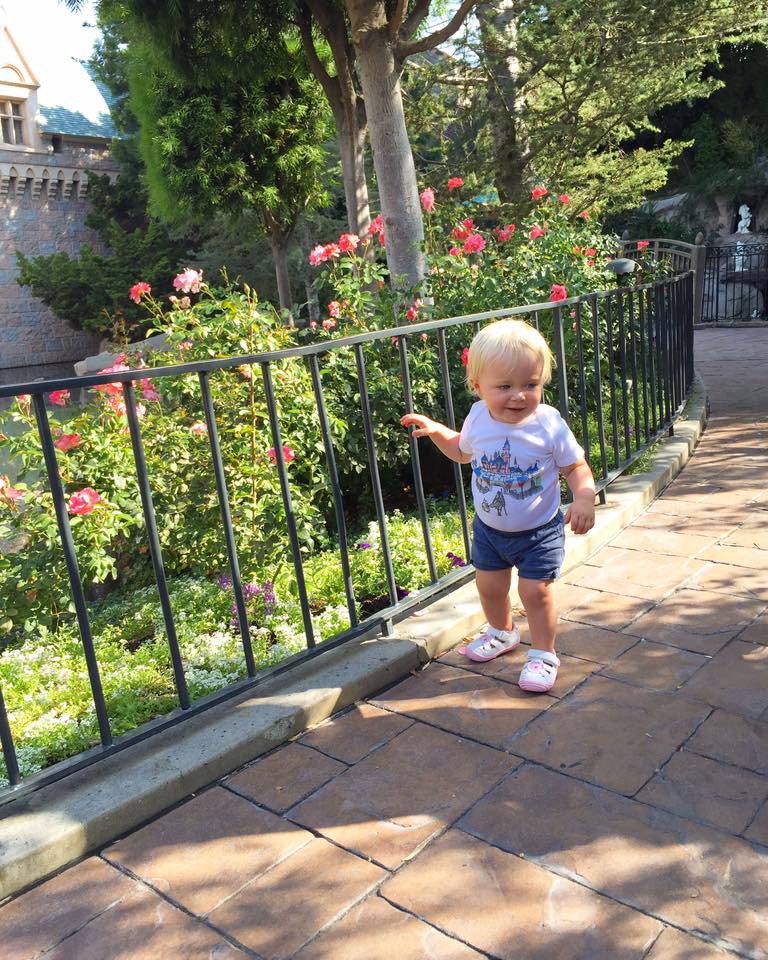 Wandering around the paths along the castle! Onesie by Beep Boop Beep Clothing

If you have a toddler or have been around one, you know that they can spend 20 minutes being fascinated by one thing. Intentionally going to the park and expecting to cover little ground can result in a magical day with your toddler. I love just letting my daughter wonder around the castle freely, looking at every nook and cranny. It forces me to stop and take time to live in the moment and notice more details. I’ve seen more Hidden Mickeys, more special windows on Main Street shops, and now notice the changes the horticulture department makes. She has so much fun exploring, and shows me things I would have never realized before walking at a normal pace with a specific destination. 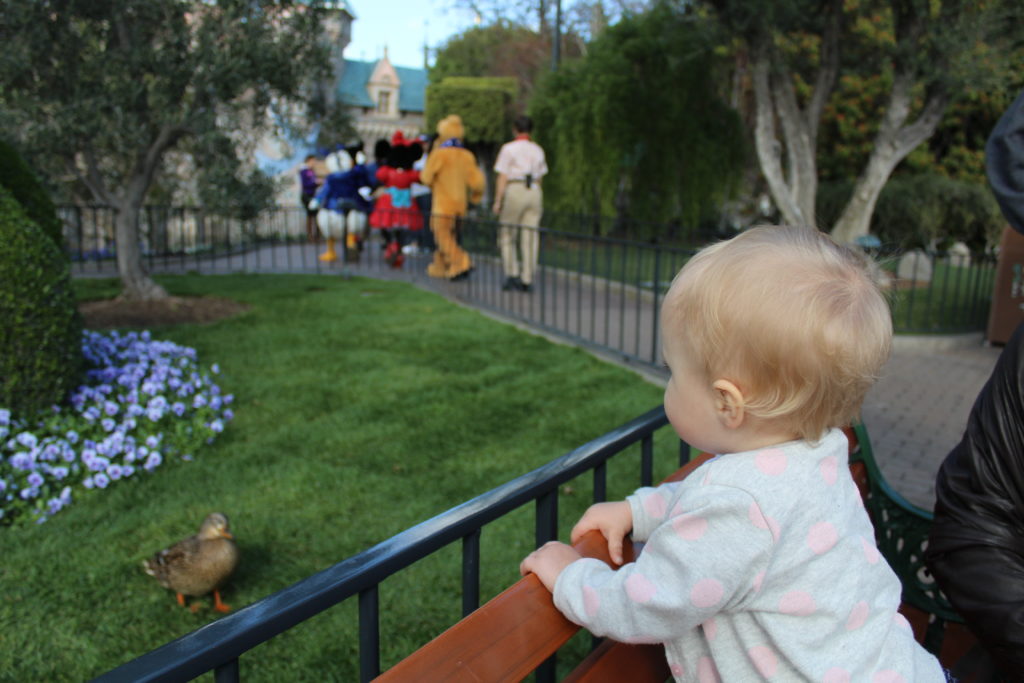 My daughter having a ball watching the Disney band and fab five!

As I mentioned before, going to Disneyland and skipping the lines is essential in keeping tantrums at bay! Shows are a great way to keep your little one intrigued and still getting to enjoy an attraction. I love going to see Mickey’s Magical Map or watching the band or Dapper Dans. At Walt Disney World, seeing Mickey’s Philharmagic is a great one, too! 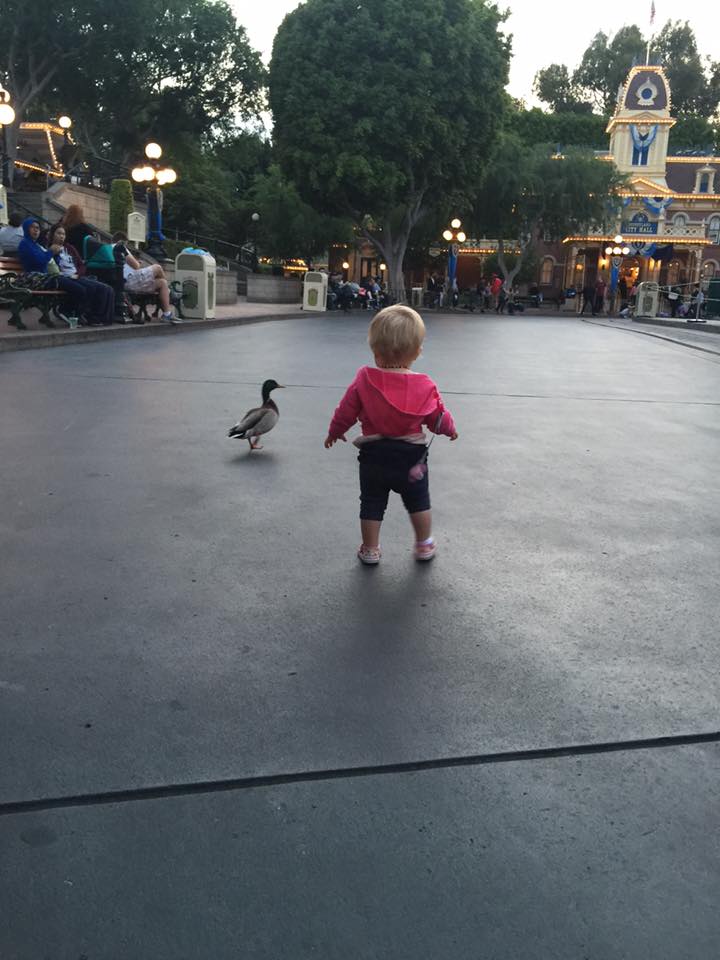 Walking right down the middle of Main Street, USA

If you’re going to a Disney park alone with a toddler, you’re most likely a passholder staying for a few hours as opposed to a visitor planning to stay from open till close. In that case, ditch the stroller! I used to love bringing the stroller either so I didn’t have to carry my daughter or to use as a “shopping cart” to carry my stuff. But now I try to bring less, wear a good backpack, and just let my daughter walk! This way, when my daughter is walking and exploring, I don’t have to try to follow her while also steering a stroller. She has the most wonderful time doing this! I sometimes bring a leash just as security so I know she won’t accidentally get lost in the crowds. Also leaving the stroller at home is fantastic in reducing YOUR stress level, since you can just focus on spending time with your little instead of weaving a stroller through crowded areas and parking it every few steps. I know this tip sounds scary to try, but trust me, it makes the biggest difference!

Minimize the Pictures You Take 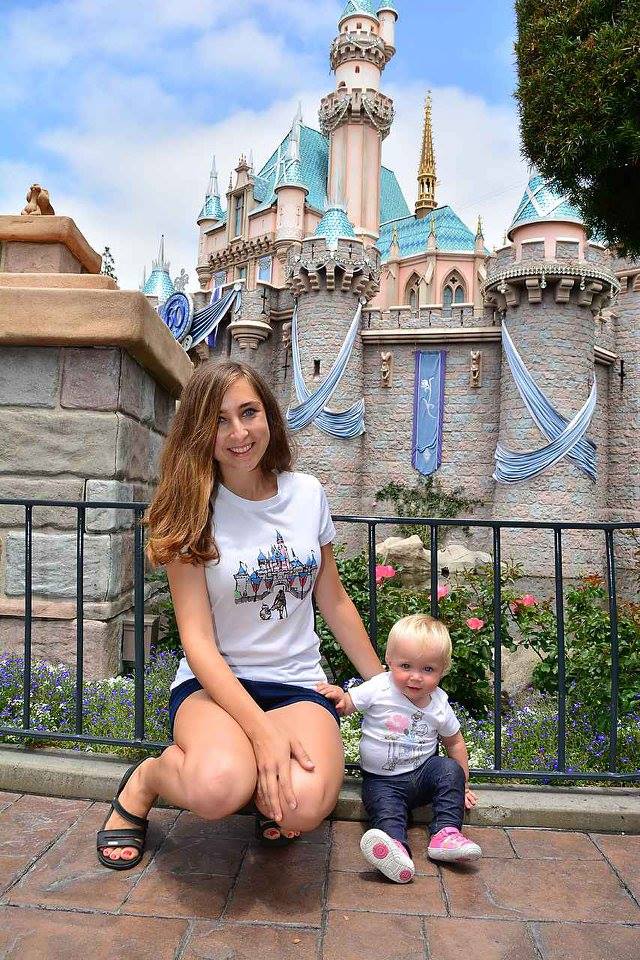 It is super tempting to take adorable pictures of your little when they’re at the Happiest Place on Earth. But being on your phone taking pictures I have found can sometimes frustrate a toddler more. Once the phone is out, they want it. Also, we aren’t able to be fully present with them. Instead, get better pictures and be included in them by doing Photopass opporunities with your children! Some passes include the photos for free download, or you can give your phone to a Photopass photographer. Having your phone out less and being with them instead of behind a camera helps minimize tantrums greatly!

Go to an air-conditioned space 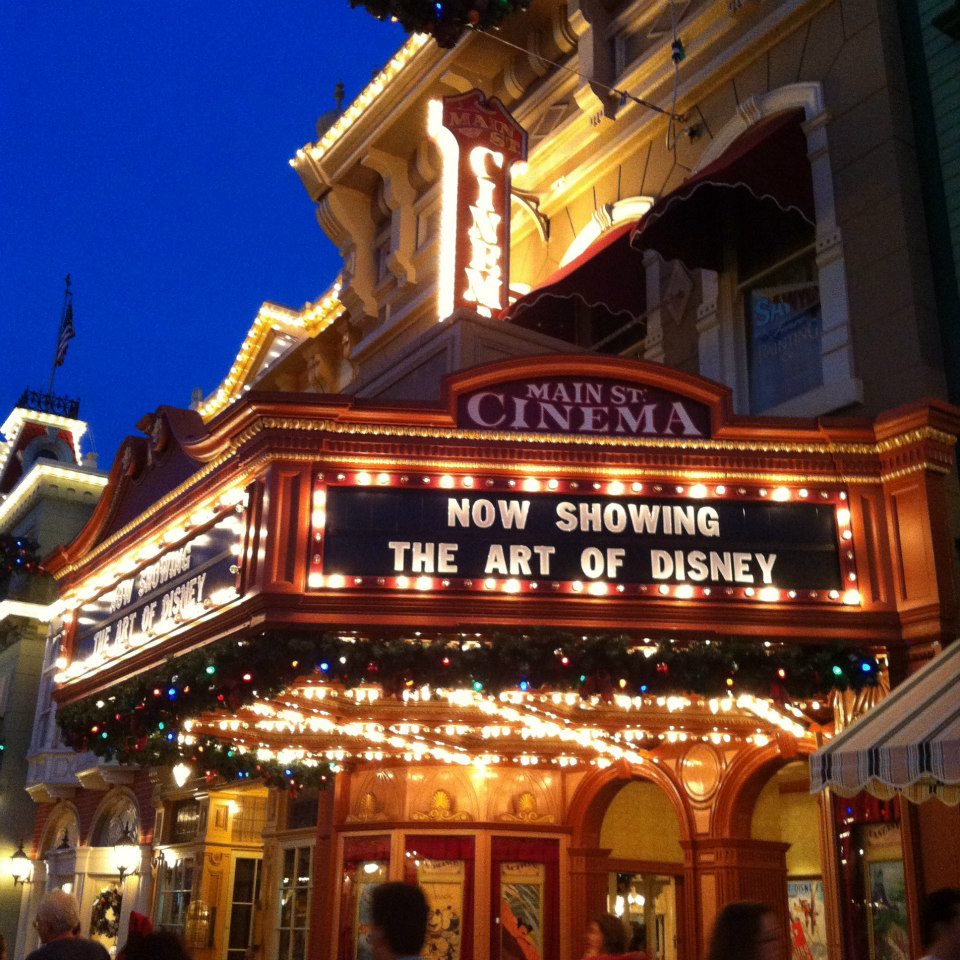 Running around with a toddler is fun but very tiring! Make sure to stop and rest in an air-conditioned space that also provides lots of entertainment for your child! At Disneyland Resort, my favorite places are:

My favorite places at Walt Disney World Resort are:

These places all have endless fun things for your child to safely run around and look at! Also, any hotels are great to explore with your little. They always have pretty grounds, and often a fun TV-watching area for kids.

As soon as my toddler would through a tantrum or be in a crabby mood, I used to get frustrated and head home from Disneyland. It made me feel nervous to try the parks again, and made me feel frustrated we couldn’t enjoy Disneyland together. And what I now realize is the most helpful tip in keeping our time at the park longer and more enjoyable, is that if my daughter is having a meltdown, rather than taking her home and having it escalate while being strapped into the car; take her to the baby care center. There’s a baby care center in each park, and in addition to changing tables and nursing areas, there’s tables, chairs, a TV, books, and often coloring materials. Before heading home, I try taking my daughter in her to help her calm down from over-stimulization, have a snack, and cool off (there’s also a water cooler and high chairs there). After she has relaxed and is in a better mood, then I’ll try again. More often than not she just got a little over excited and needed a calmer atmosphere for a bit before ready to jump back into more. 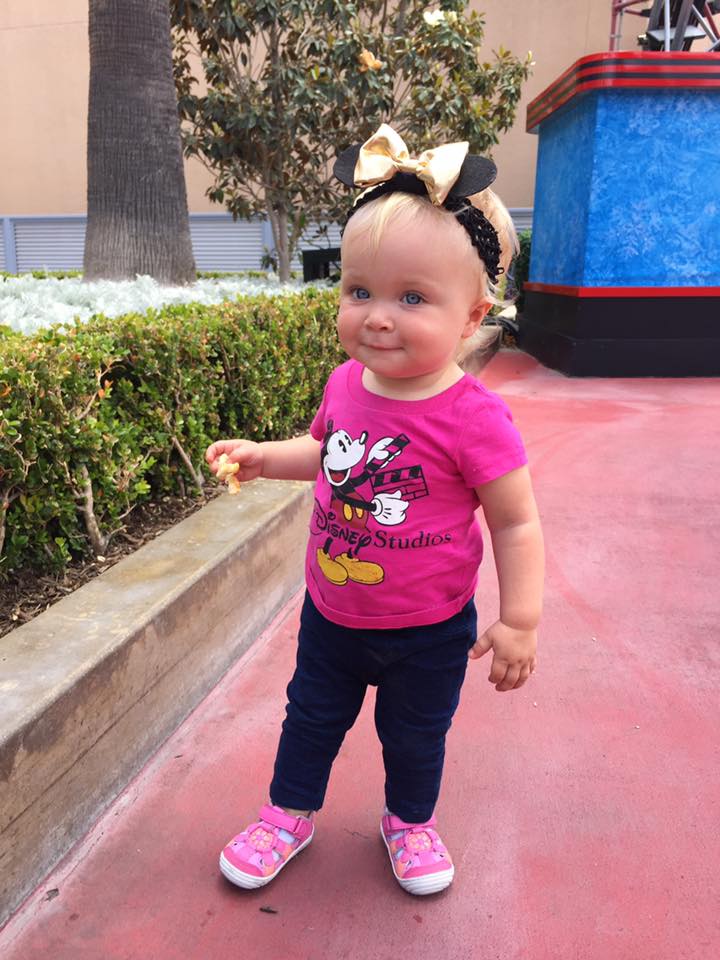 Utilizing these tips make one happy toddler! Ears made by What the Hipster Baby.

Those are a few of my tips and tricks that are most helpful to me in ensuring an enjoyable time at the Disney parks alone with my toddler. I would love to hear via Twitter, Facebook, or the comments below on what tips and tricks you have found helpful, too!