As my long-time readers will know, I absolutely love figuring out what pieces of Disney I can find outside Disney Parks, I call this “Finding Disney“, and actually have a whole section on my blog of both known and lesser-known places to visit that are Disney-themed or have Disney history. On my first ever visit to New York City, I of course made it a point to find Disney, and am excited to share with you all the Disney things I was able to experience and find out about!

The Times Square Disney Store has got to be the best Disney Store I have ever been to. It is two stories, just like the San Francisco one if you’re familiar with that, however each floor is a lot larger. The bottom floor has a statue that’s Minnie Mouse dressed as the Statue of Liberty for a photo opp. Near that, you can find all the Disney merch that’s exclusive to the Times Square Disney Store. And there’s a LOT of it! I picked out a Minnie Mouse as Statue of Liberty light-up ornament and a fuzzy Spirit Jersey with a Mickey head on the front and the words “New York” on the back. Also on the bottom floor, you can find the seasonal merchandise (when we went it was their Christmas merchandise), as well as some Disney Parks apparel and plushes. 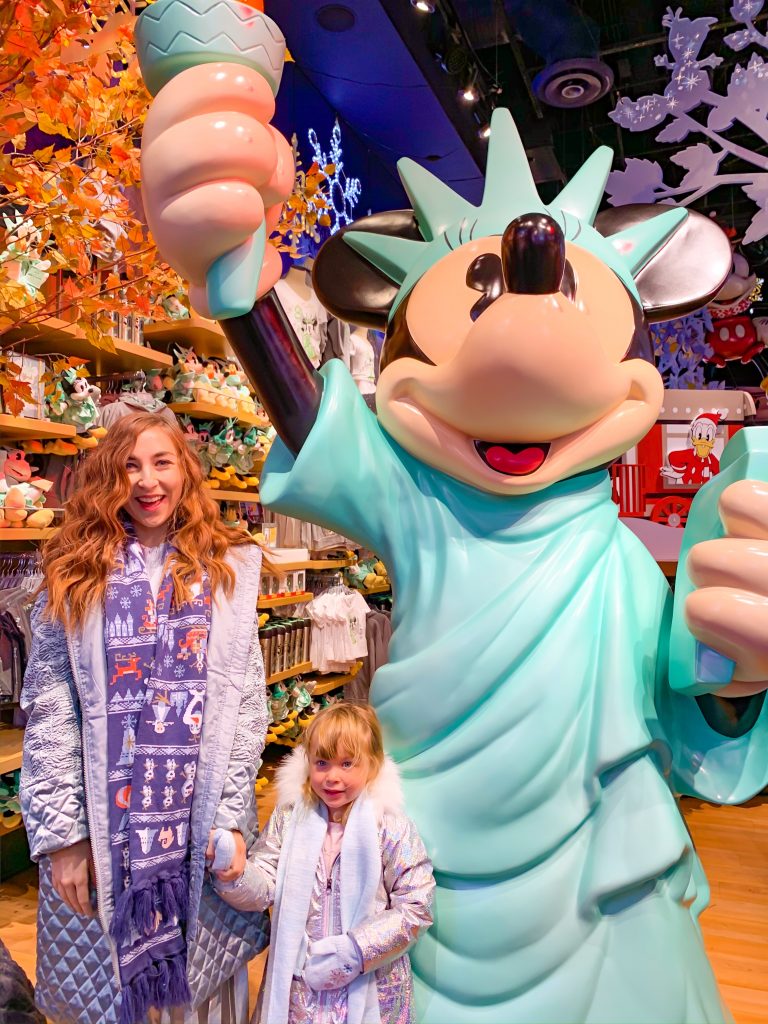 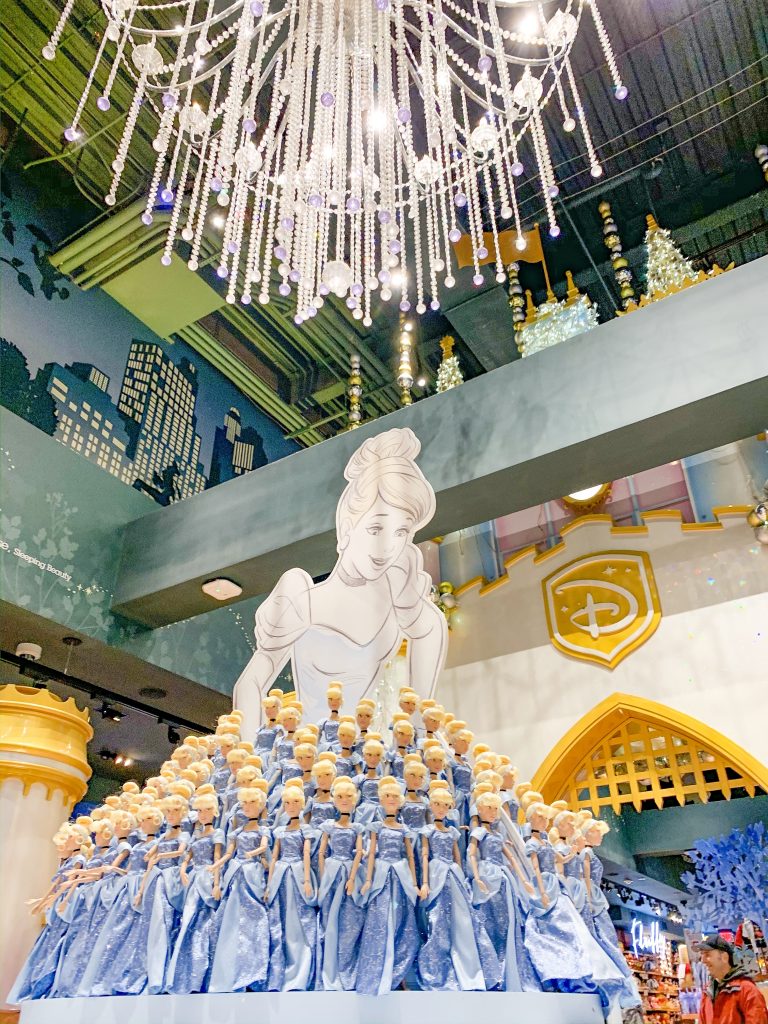 Next, you can head up the escalators which is a real treat! The escalator has Corona lanterns from Tangled, and plays music and sound bites from Disney’s Tangled as you ascend up to the top floors. On the walls lining the escalator, you can see Disney characters flying through New York City, such as Peter Pan and the Darling children soaring over the city’s skyline. On the second floor, you can find adult and children apparel, jewelry, toys, costumes, and merchandise themed to the next movie coming out. They also had a photo opp area where you can purchase an experience to have your photo printed, receive a pin and get your photo put up on the Disney Store’s Jumbotron displayed in Times Square! This was about $30, and they have different backdrop and pin themes to choose from. We picked the New York Times Square theme since it was our first time in NYC! When you do the Jumbotron photo opp, you select the timeframe you want your photo displayed. This gives you a five minute window the photo will be up within, so you can be sure to be across the street in time to snap a pick of yourself displayed on the Times Square Disney Store! 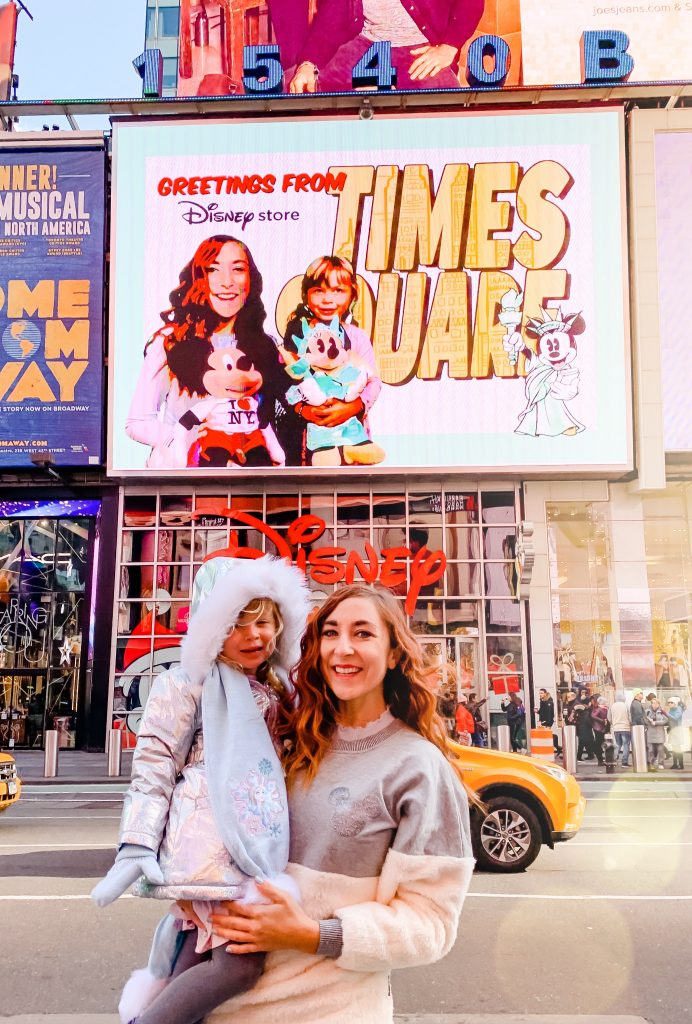 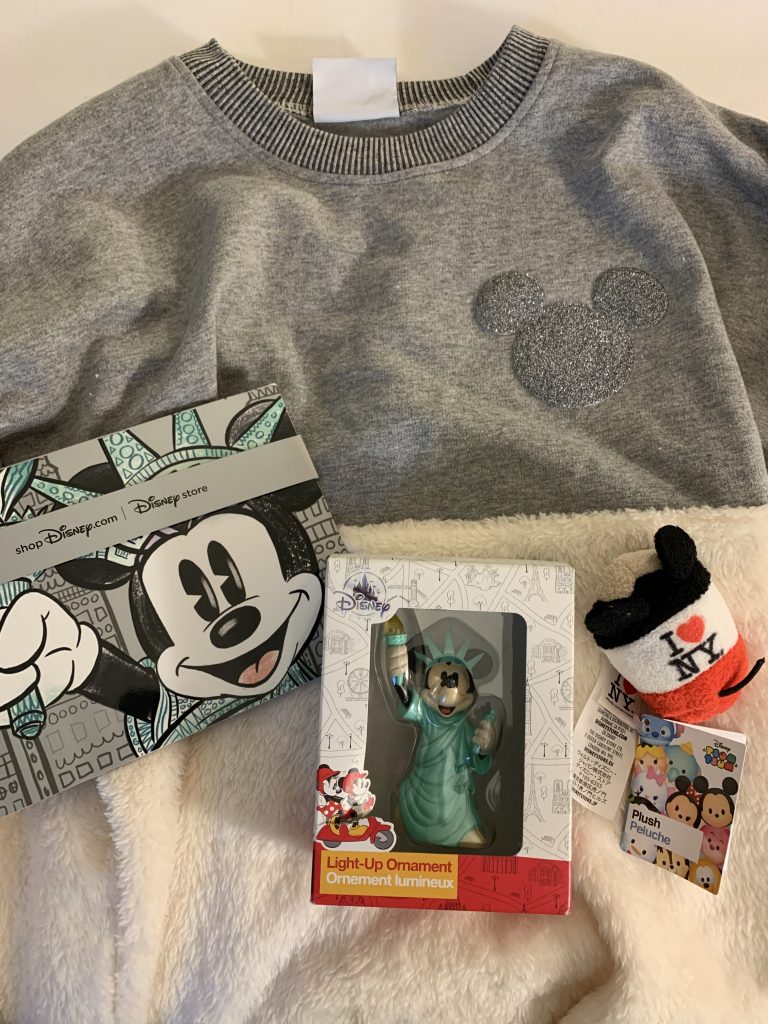 If you’re going to visit this store, I recommend is possible to go at opening, as they did a wonderful opening ceremony that was more elaborate than a typical Disney Store, where the cast members sang a Disney Store-parody version of “Belle” from Beauty and the Beast.

If you’re looking for more great Disney photo opps in New York City, there’s an amazing Mickey Mouse Instagram wall near a CVS in NYC, about a 20 minute drive from Times Square. This was the one Disney thing on my to-do list I didn’t end up having time to do, but still wanted to share about it! You can find it by putting “Mickey Mouse Wall” into Google Maps or in the Uber or Lyft app.

Having “soho” much fun exploring New York! I’ll be doing a giveaway featuring some #mickeytrueoriginal merch when I get back— Raise a hand if you’re excited! ??

When I visited The Plaza Hotel in New York City, I achieved a major bucket list item, I had always wanted to go there! I dined at the famous Palm Court restaurant, and while there one of the dining managers noticed we were decked out in Disney. He came to me and told me a little hidden gem of Disney at The Plaza Hotel: The Oak Room. It’s a ballroom adjacent to the Oak Bar, and may not always be open due to private events. But it’s worth a shot to check if it is open to see when you’re there. One of the paintings that are on the walls is a cloud in the skies, which they said Walt Disney saw when they were in the early stages of brainstorming Walt Disney World, and he said he wanted a castle like that, and supposedly the design inspired Cinderella Castle at Walt Disney World. This hasn’t been confirmed by the Walt Disney Company, but is a rumor around on the internet and people in New York! According to the site NYCGo: “The Oak Room’s interiors evoke a hilltop Rhineland castle, where frescoes decorate a wall like picture windows. (Legend says these paintings inspired Walt Disney to build his own castle.”

4. See a Disney Show on Broadway!

Disclosure: My visit to Frozen on Broadway was provided complimentary, but all thoughts and opinions are my own.

Disney and Broadway are a match made in heaven, and they seem to dominate the space with THREE shows currently on Broadway in New York City: Aladdin, The Lion King, and Frozen. Aladdin is at the New Amsterdam Theatre, which is the theatre Disney signed a 99-year lease for and renovated as their own when they wanted to get on the Broadway scene with Beauty and the Beast. (Although the theatre is actually 103 years old). You can see Aladdin there currently, as well as take a tour of the theatre, called the “Behind the Magic” tour, which walks you through its rich history. Another interactive way you can experience Disney on Broadway is through their workshops they offer. They are for groups of 15 or more, and are 90-minutes long of a performance based workshop of the Disney on Broadway show of your choosing. 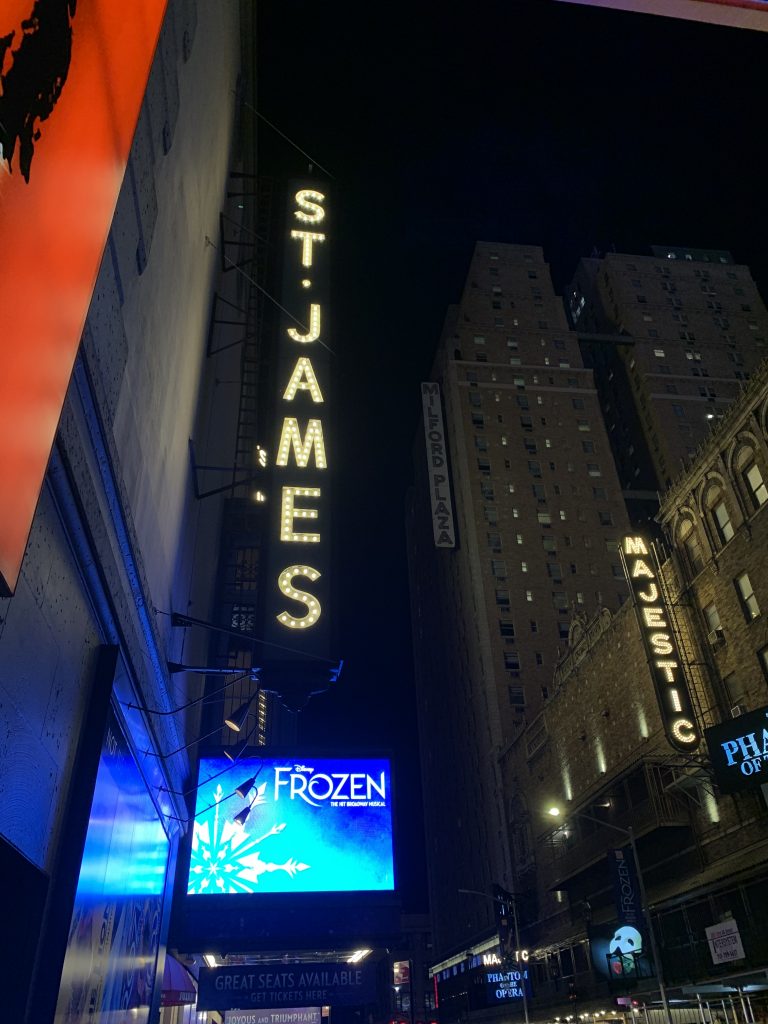 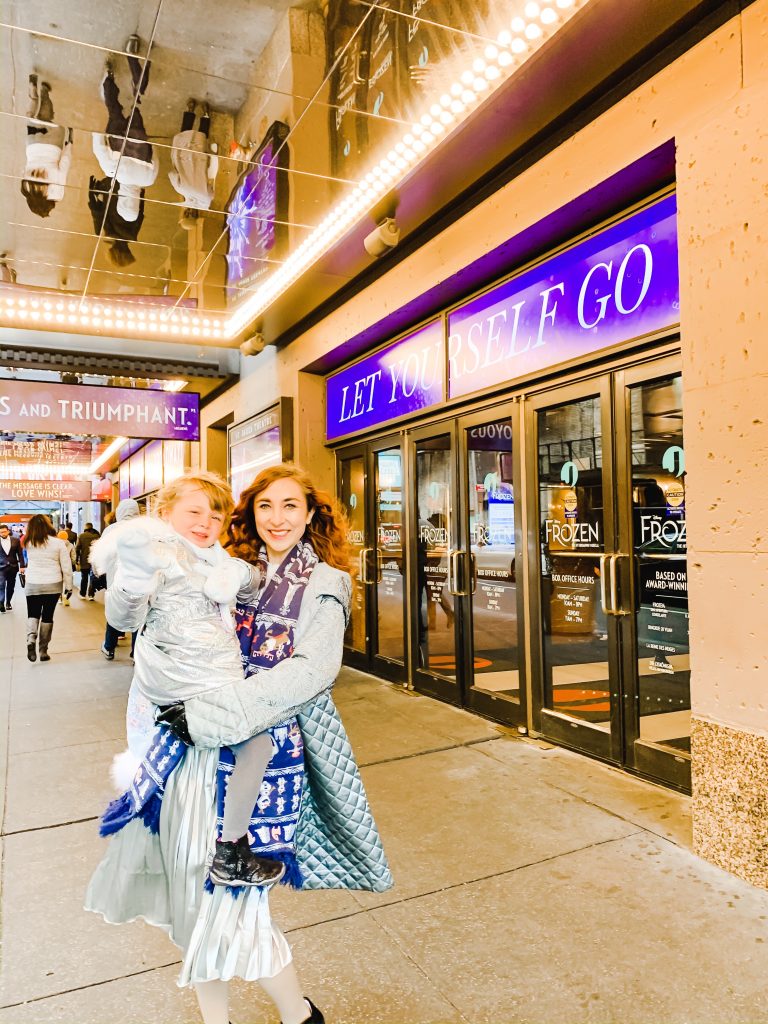 The Lion King is currently playing at the Minskoff Theatre, located conveniently right across the street from the Times Square Disney Store. And of course, you can see Frozen on Broadway, which is the show we saw (since Frozen is my favorite movie) at the St. James Theatre. This theatre is very close to the heart of Times Square, and it’s next to a store called Theater Circle Gifts, where you can find some of the merchandise and memorabilia of Broadway shows (including Disney shows of past and present). Frozen on Broadway was absolutely dazzling, the craftsmanship and details of the costumes and sets were stunning. Caissie Levy as Elsa is so incredibly talented, hitting all the notes of the power ballad “Let it Go” flawlessly. I really appreciated the forward-thinking casting Frozen the Musical has done, including casting a female Olaf. As well as the performance we saw, which had a young Anna who was white, and then adult Anna who was black. When you have a great and compelling story, what matters is the talent and it’s clear that the teams working for Disney Theatricals realizes that! 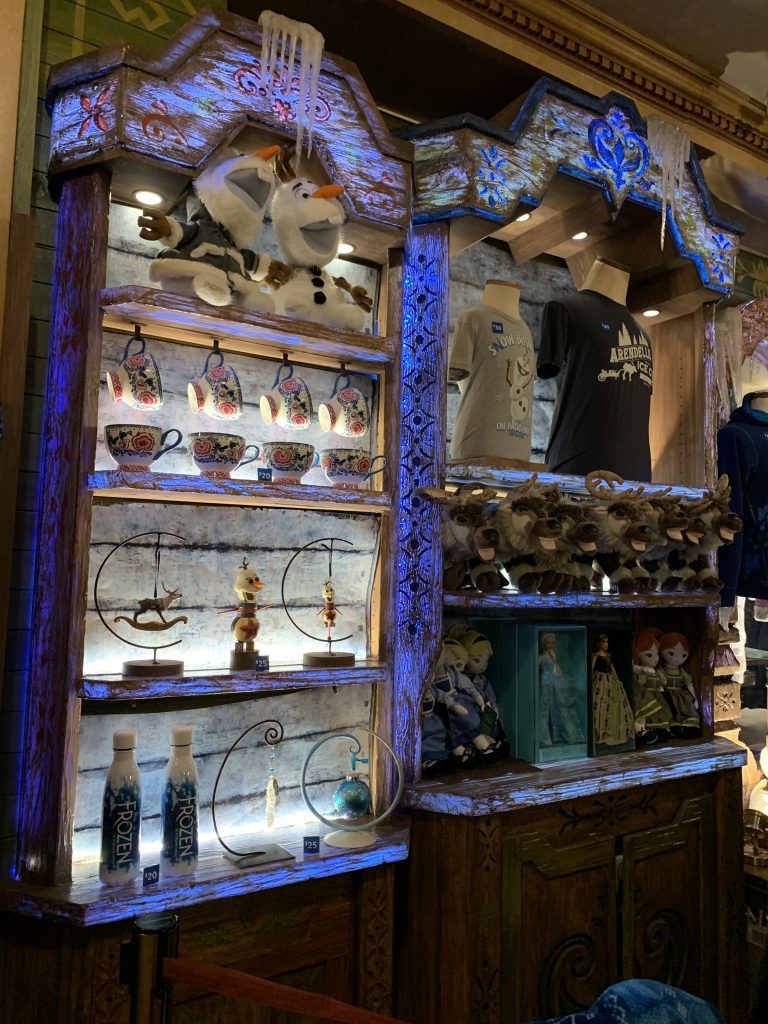 Another thing I want to mention about Frozen, which may seem like a minor detail but something I loved, was how wonderful the merchandise was! I so often see merchandise for shows being very basic logo keychains, shirts, pins, etc. This merchandise all felt very special and unique, with a lot of thought put behind it. I purchased a Sven ornament and a jewelry box that is a replica of the orb Elsa holds at her coronation. You can find tickets to Frozen the Musical here.

Within Central Park, there’s a lot of hidden pieces of Disney-related thing! This isn’t necessarily Disney as this statue is based on the art in the Alice in Wonderland books, but Disney fans (like myself) would love to visit this! It’s a massive statue near a pond in Central Park with Alice, the Mad Hatter and Hare. It was located a short distance from the designer shops on 5th Avenue. 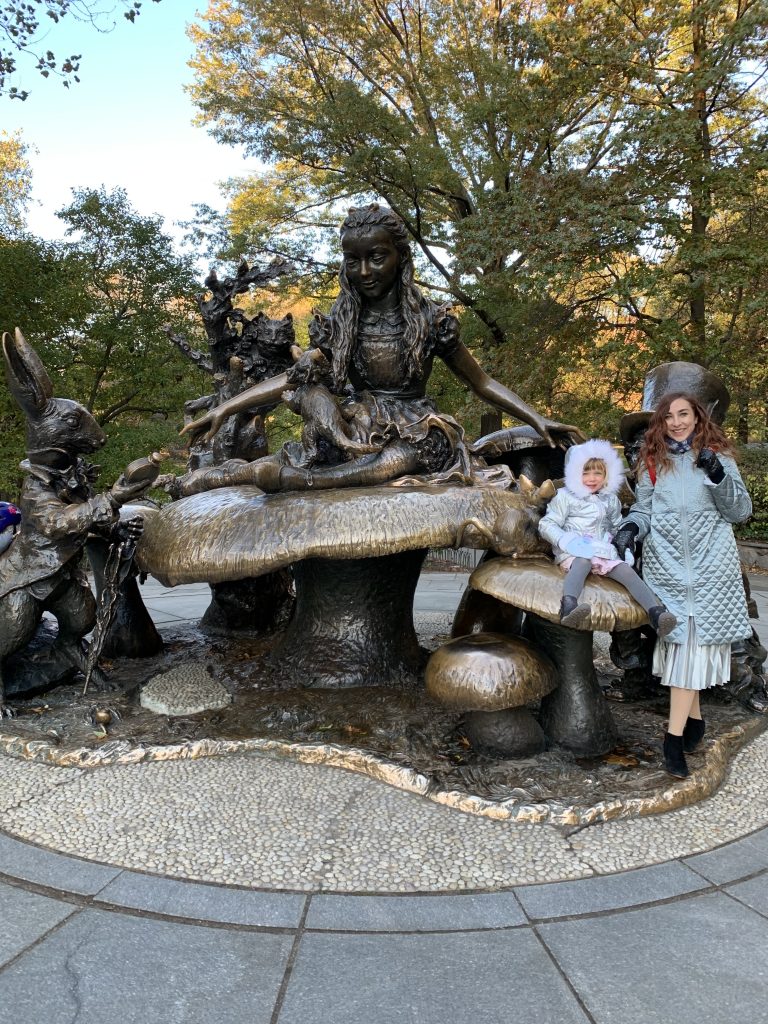 Another thing Disney fans may enjoy that’s next to the Alice in Wonderland Statue is a Hans Christian Andersen statue (he wrote The Little Mermaid, as well as the story The Snow Queen, which inspired Frozen). From June-September on Saturdays 11am-12pm, there is a Hans Christian Andersen story time held there, where you can hear some of these classics that have inspired Disney filmmakers for decades. Also throughout the park, you can find places (such as the iconic fountain) where the “That’s How You Know” scene from Enchanted. 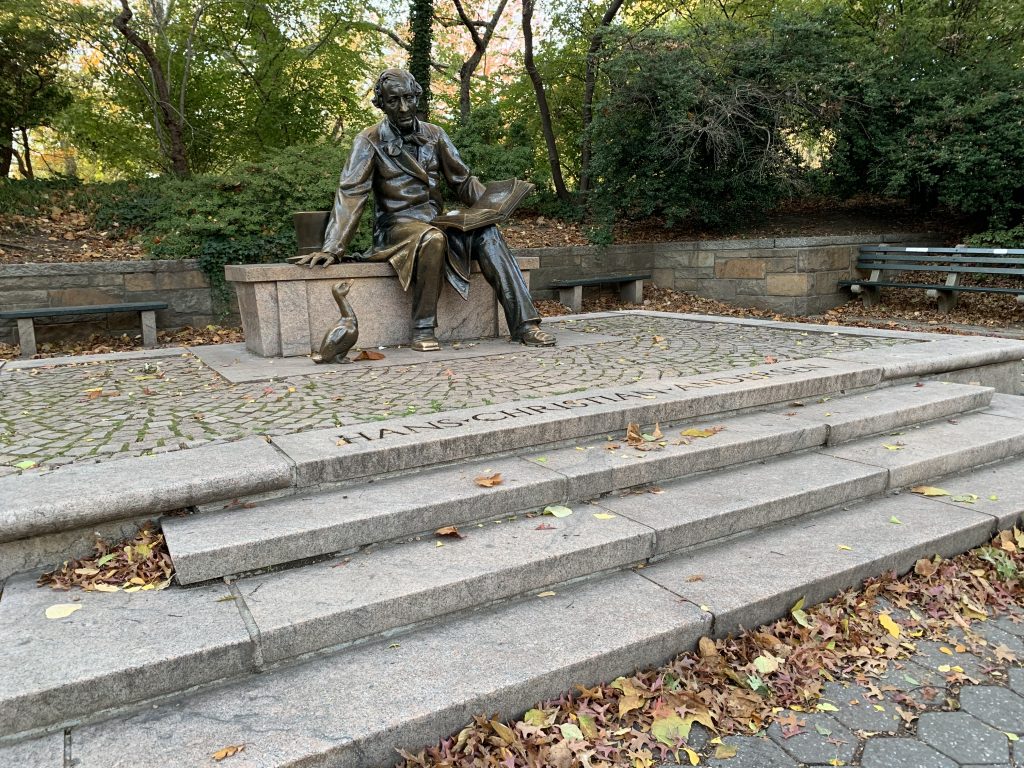 There is a crucial piece of Disney history sitting in the children’s wing of the 42nd Street New York Public Library: A Winnie the Pooh display! There among the books to checkout and the computers for kids to play on is a painting of the Hundred Acre Woods, and in front of it a glass case with dolls that has dolls nearly 100 years old: One that resembles Pooh Bear, Tigger, Eeyore, Kanga and Piglet. These were the actual dolls gifted from A.A. Milne (author of the Winnie the Pooh books) to his son Christopher Robin Milne between the years of 1920-1928, and inspired the classic children’s series. They also mentioned in the exhibit that some of the dolls look tattered since the real life Christopher Robin would let his dog play with his toys, too. 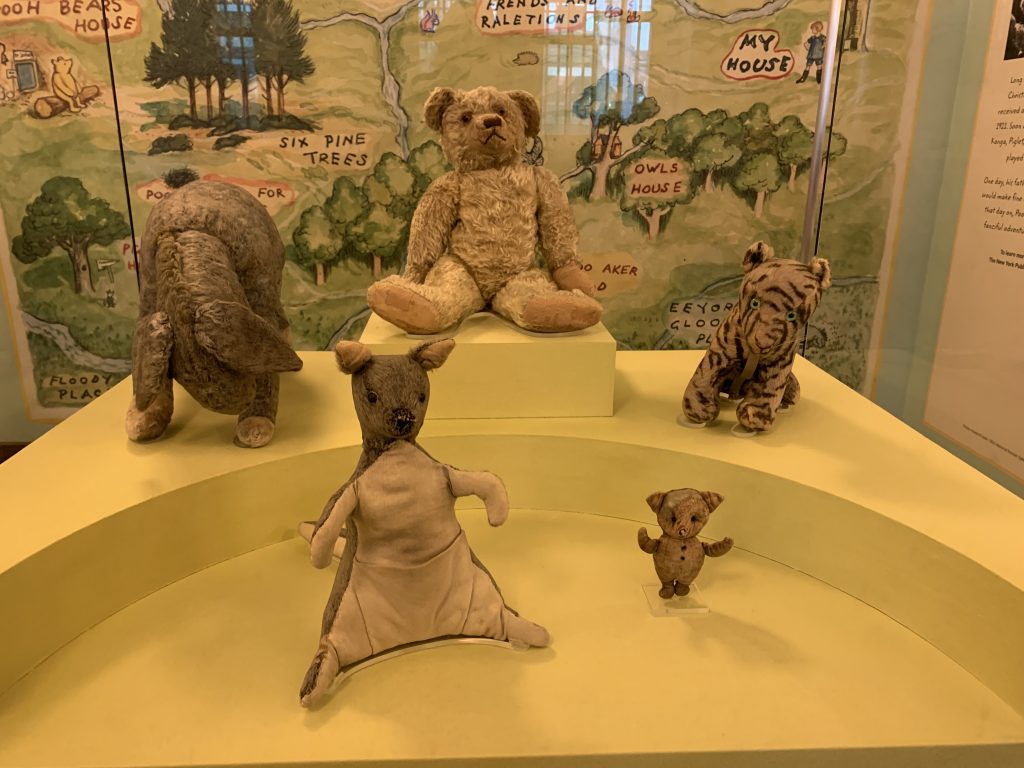 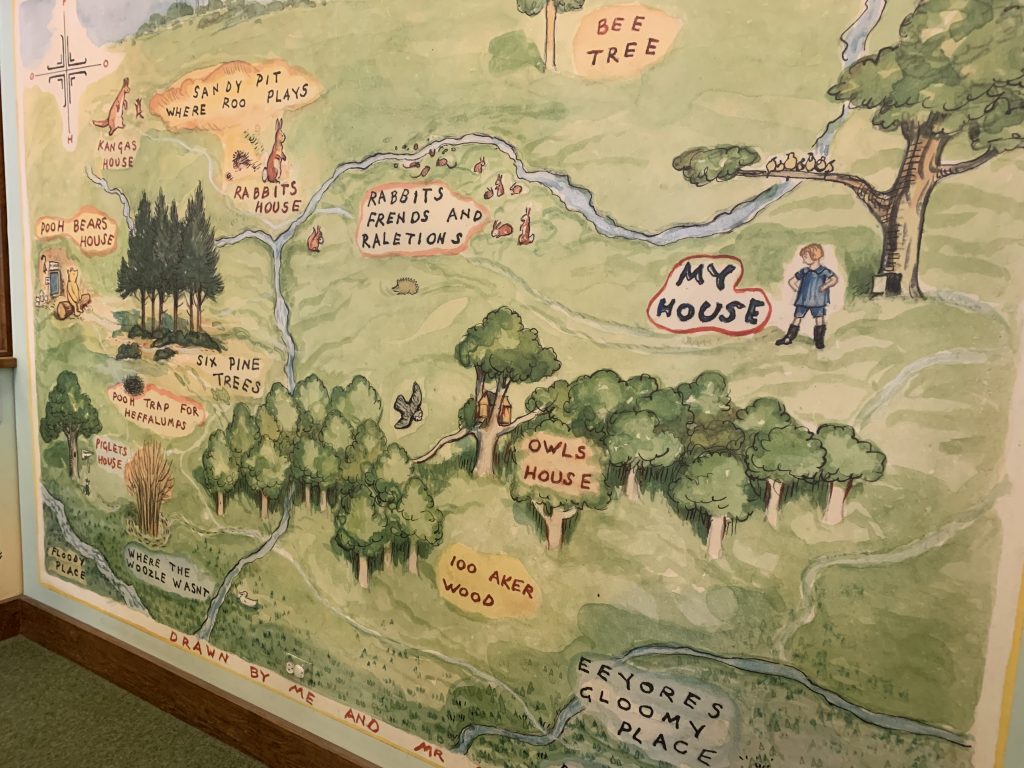 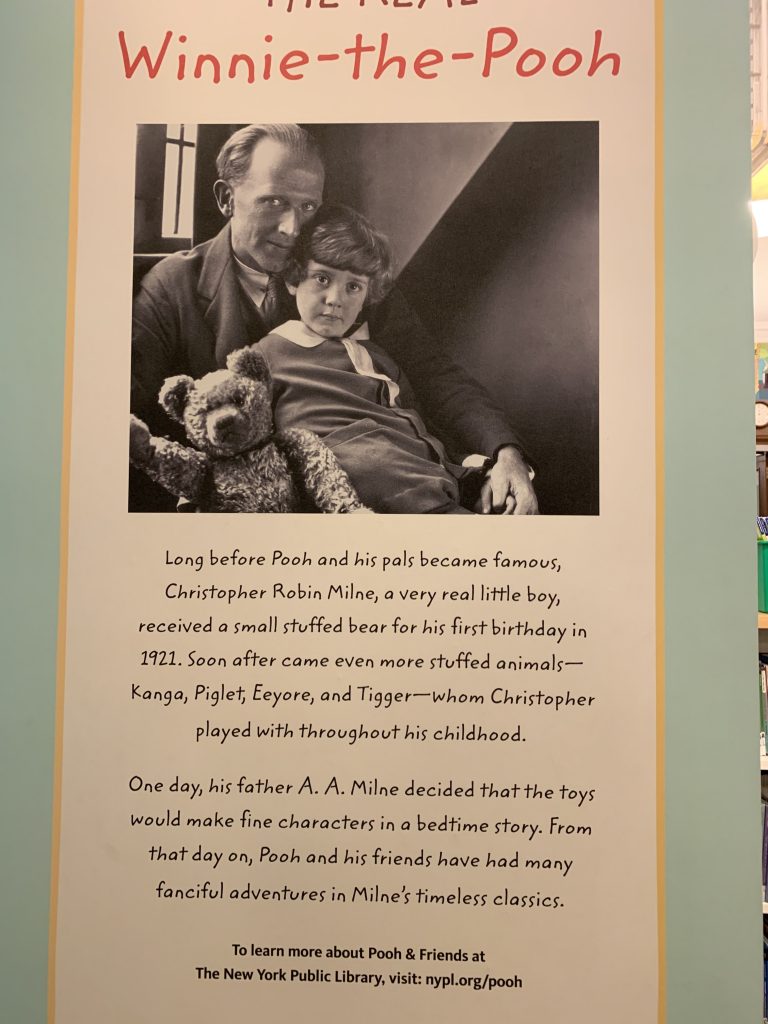 That was my experience of Finding Disney in NYC, I hope you enjoyed following along here and on my Instagram of Disney things in New York City! And if you know of more Disney gems in the Big Apple, I would love to hear about them!