Dole and Disney have two passions in common: helping families be happy and healthy! Since 2016 the two brands have collaborated to bring many Disney and Pixar characters families know and love onto Dole’s fruit, vegetable and salad packaging as a way to encourage kids to be excited about healthy eating.

Seeing her favorite Disney and Pixar characters on Dole packaging over the years such as Mickey Mouse, The Incredibles, Lightning McQueen, and more has definitely done that for my daughter, Amelia. The Dole and Disney collaborative produce packaging has encouraged her to try new foods she may not have wanted to otherwise. Plus, I see the excitement she has picking out Dole produce with Disney and Pixar characters when we have gone grocery shopping together.

Amelia and I are incredibly excited for the newest Disney and Dole branding alliance, which features characters from Pixar Animation Studios. For an eight-month long celebration, Dole will have characters from many films such as Disney and Pixar’s Toy Story, Up, The Incredibles, and Monsters, Inc. In addition to being able to find DOLE ® Pineapples with a tag featuring these characters, you can also find DOLE ® Bananas with collectible stickers with characters from Disney and Pixar’s Toy Story, A Bug’s Life, Monsters, Inc., Finding Nemo, The Incredibles, Cars, Ratatouille, WALL•E, Up, Brave, Inside Out, The Good Dinosaur, Coco and the new 2020 releases of Disney and Pixar’s Onward and Soul. As you collect the stickers, you can place them on a printable “Banana Sticker Peel and Play” sheet that’s free to download on Dole.com.

There are many other Pixar-inspired family activities also available for free to print out on Dole.com/Disney! These include fun monster faces to attach to fruits and veggies (these are especially perfect for pineapples). You can also find a Pixar Match Game, Pixar Maze, Pixar’s Monsters, Inc. Flip Game, and two printable monster masks for kids.

As part of their Fruits and Veggies Don’t Have to Be Scary Initiative happening until September 8, 2020, Dole’s chefs have also created some nutritious and delicious Disney and Pixar’s Monsters, Inc.-inspired family-friendly recipes that you can find here. A couple of my favorites are the Oodles of Monster Swoodles, which are spiralized sweet potato “noodles” with garlic and olive oil for a savory and comforting dinner. As a snack, I love the Green Slime Nacho Cups, which are baked crispy DOLE® Plantains with an avocado and veggie dip. For dessert they have Green Slimesicles, a nutritious popsicle with DOLE® Bananas, Pineapple and Spinach. 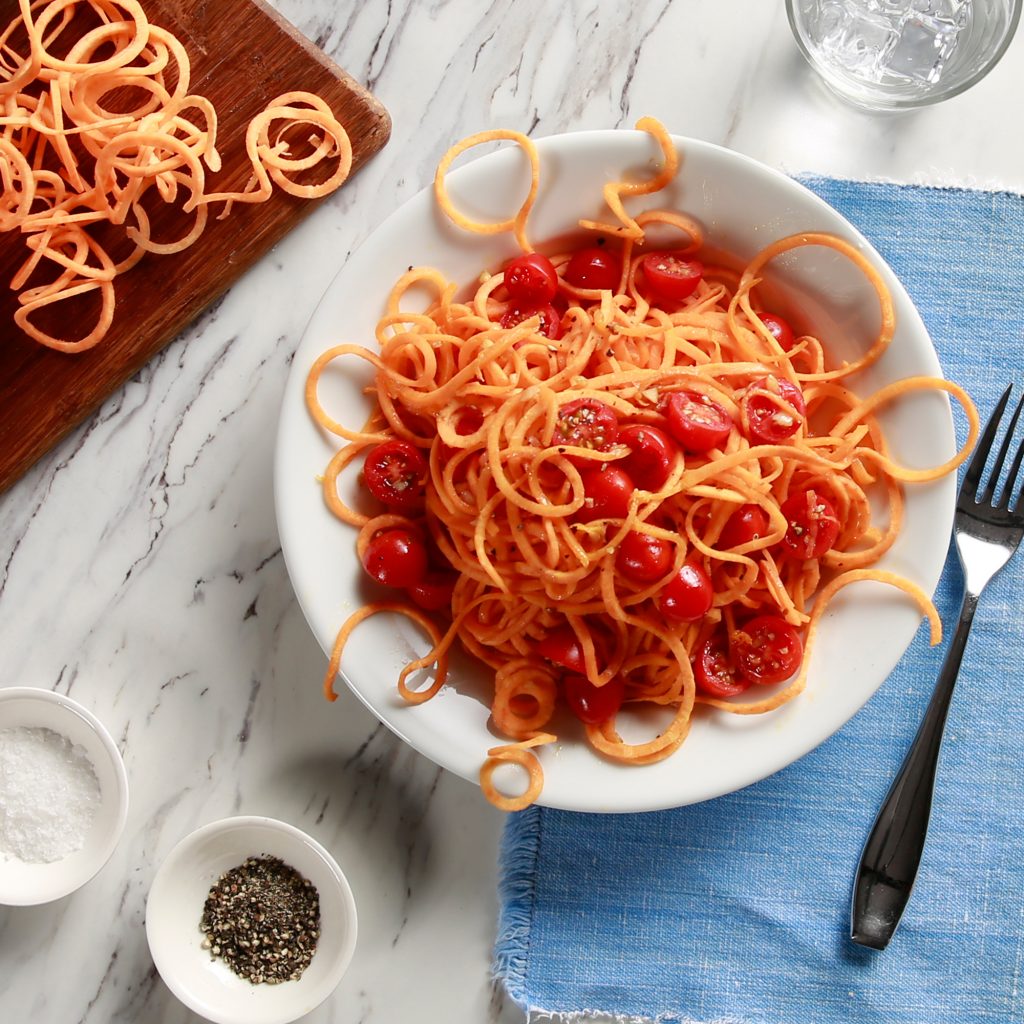 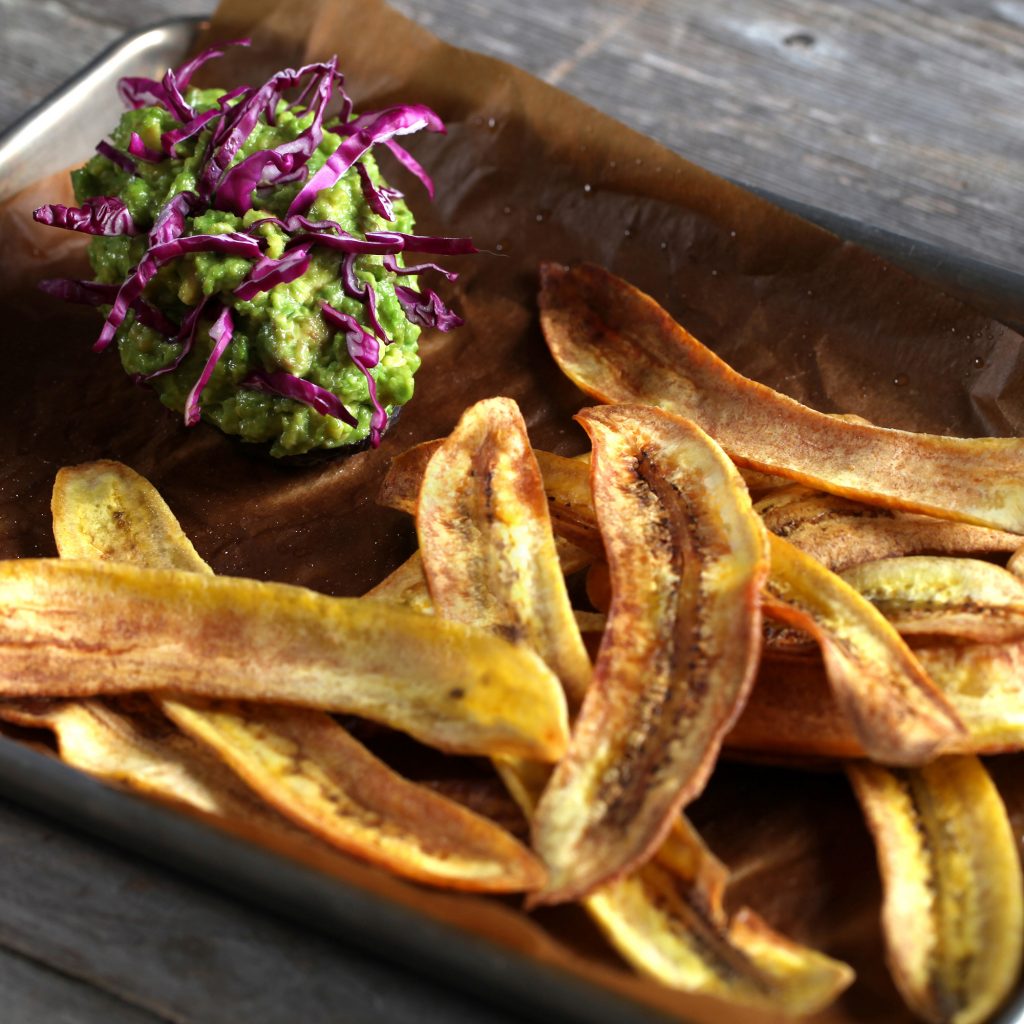 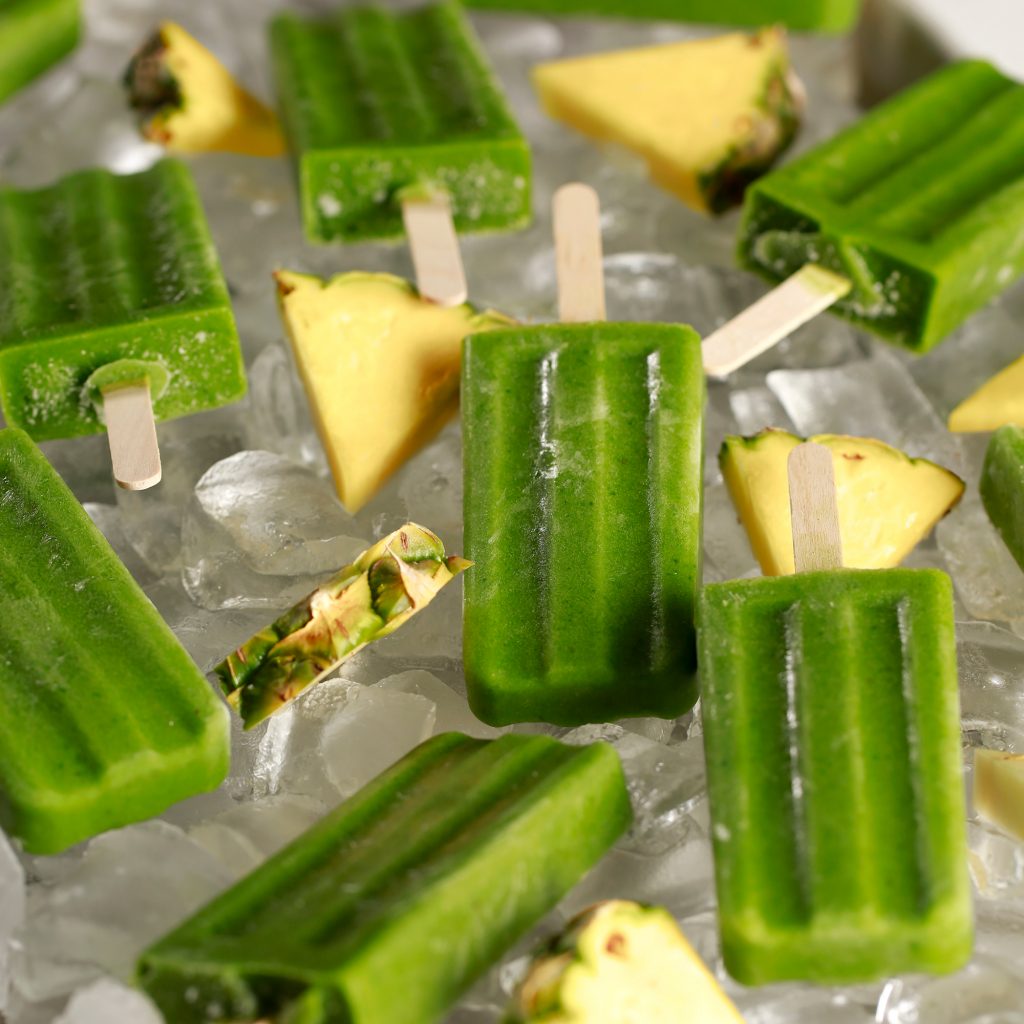 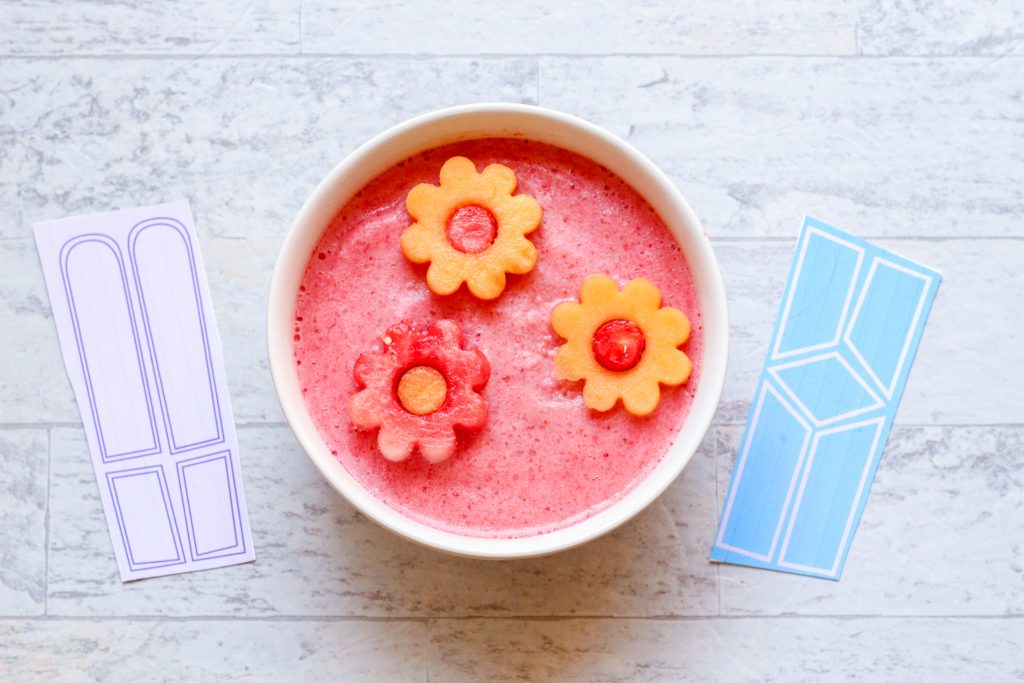 1. Blend DOLE® Banana, strawberries, pineapple and almond milk together.
2. Pour in a bowl and then place in a freezer while you prepare your fruit (so it doesn’t melt!)
3. Use a flower cookie cutter to cut three flowers out of DOLE® Pineapple and cantaloupe.
4. Use a small circle cookie cutter or cherry pitter to cut three small circles out of watermelon and cantaloupe for the center of your flowers.
5. Remove the smoothie bowl from the freezer, and place your “flowers” inspired by Boo’s door on top! 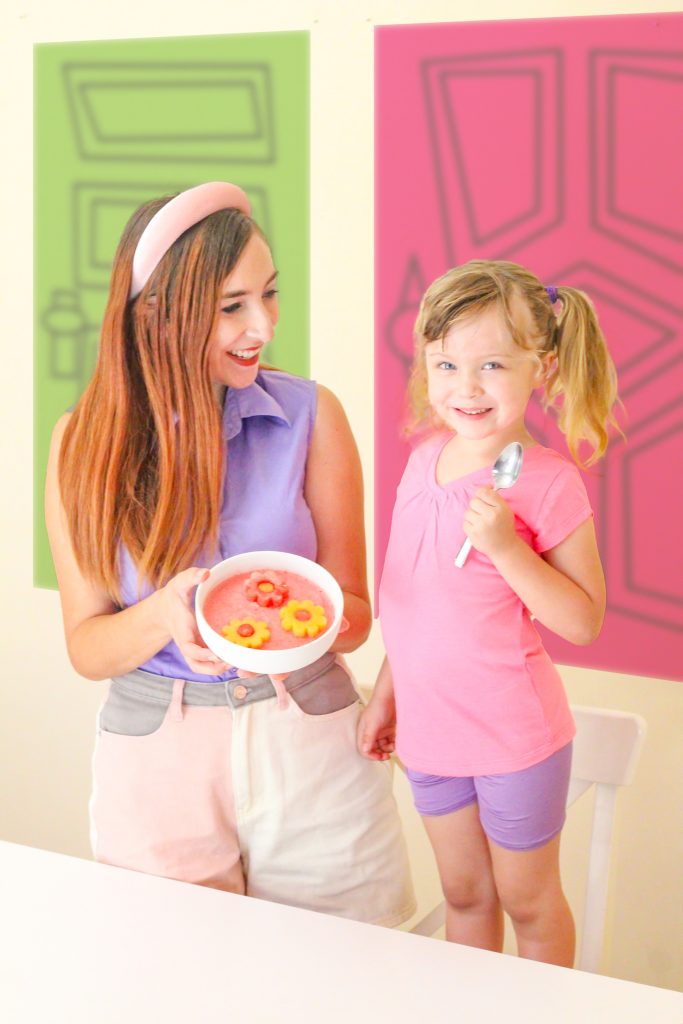 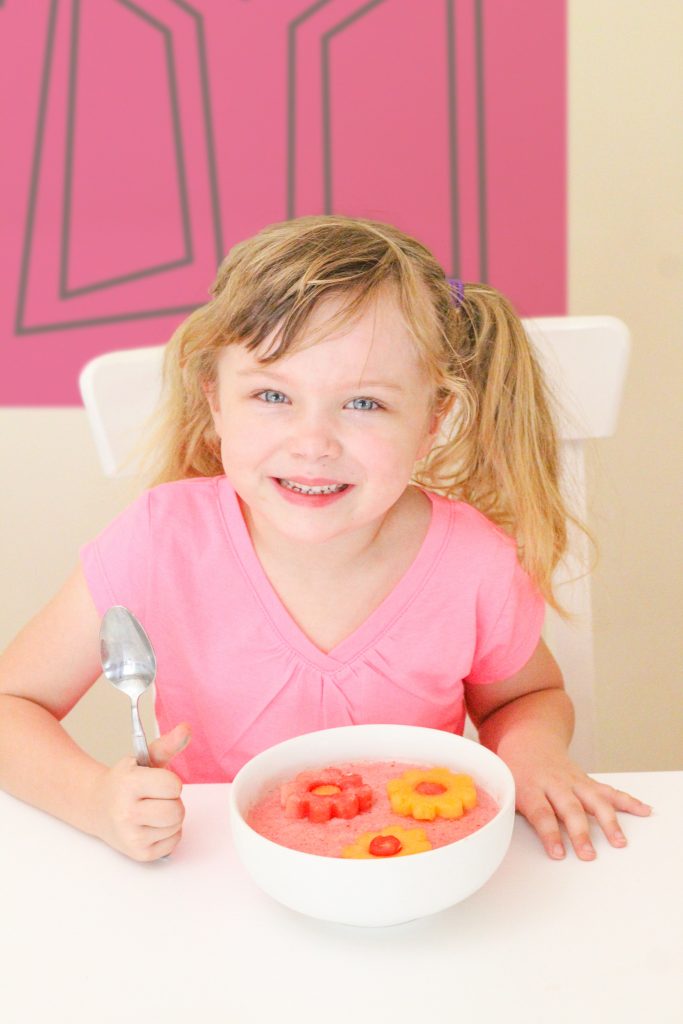 My daughter absolutely loved the taste of this banana, pineapple and strawberry smoothie, and of course was very excited to see it decorated and inspired by Boo. 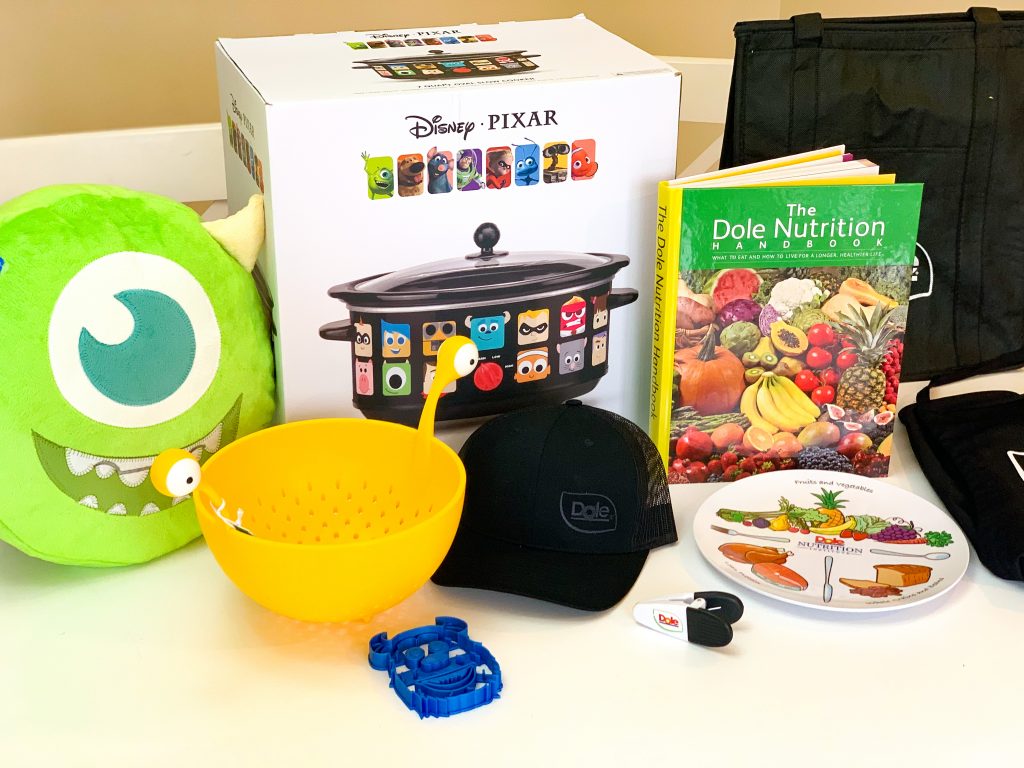 So my readers can enjoy these delicious recipes at home in Pixar style, I have partnered with Dole to give away an amazing “Not Very Scary Prize Pack!” It includes a Pixar slow cooker, Sulley cookie (or fruit) cutter, monster-inspired spaghetti strainer, a Mike Wazowski pillow, plus The Dole Nutrition Handbook, Dole hat, apron, plate, insulated reusable bag, and magnetic chip clip. To enter to win, please fill out the entry form below. 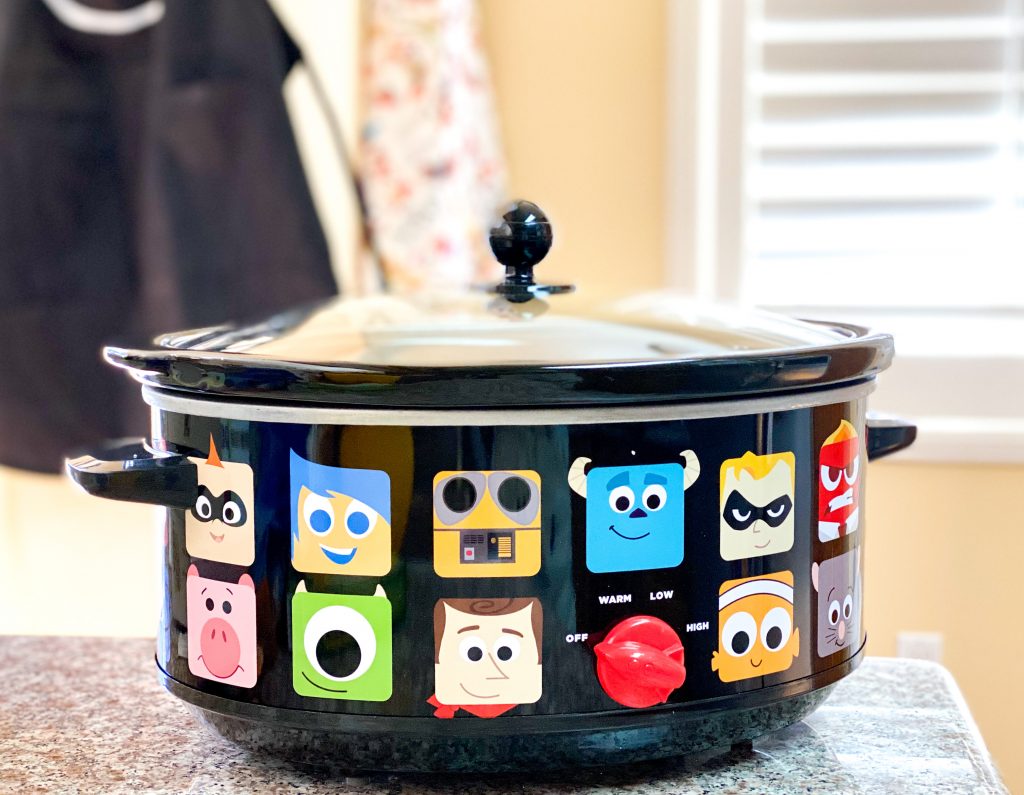 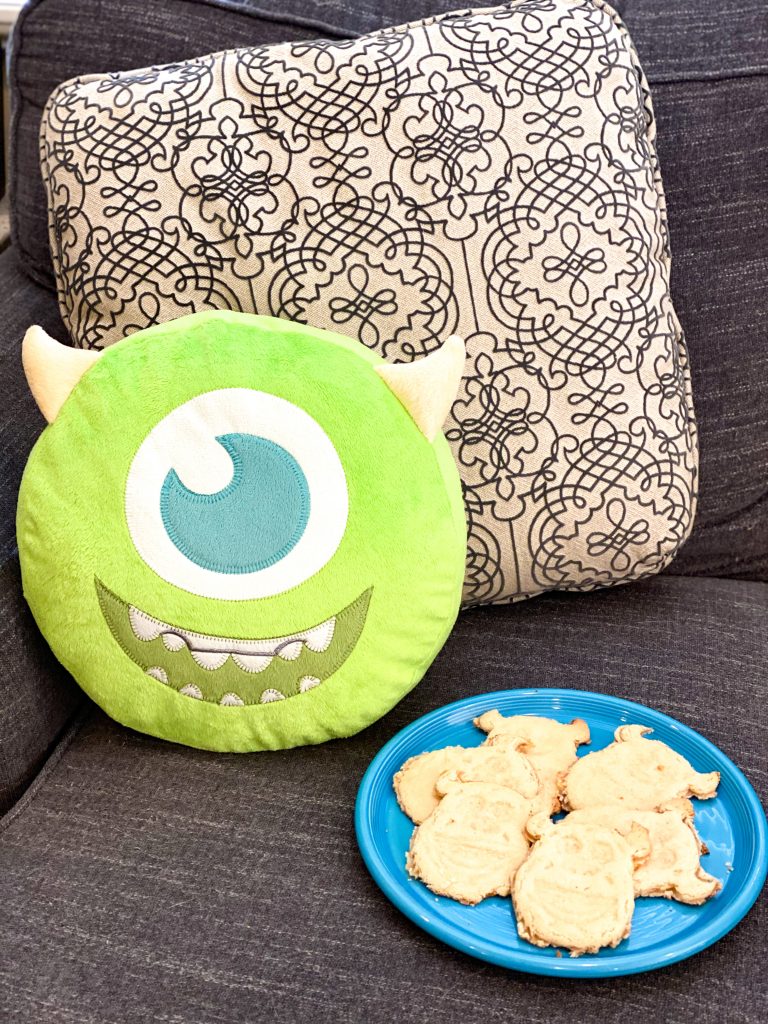 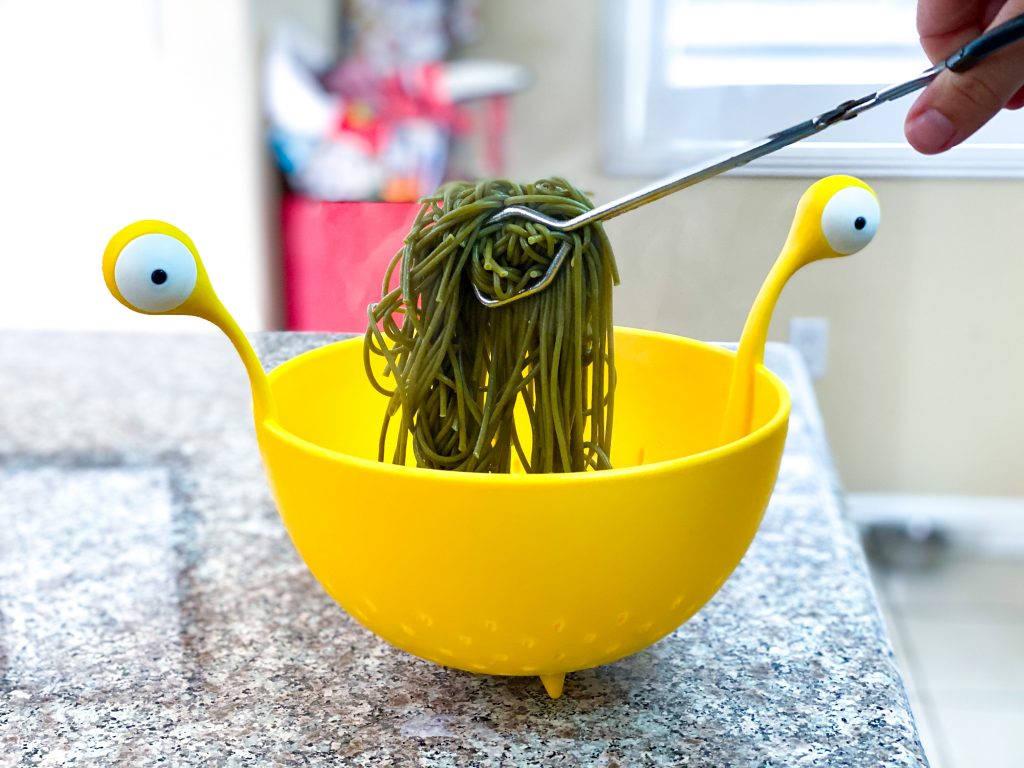 I am receiving the same prize package. This giveaway is in no way affiliated with Dole or Disney. Dole is simply providing the prizes.