Last summer, all hope seemed lost at the end of Avengers: Infinity War, the epic battle of the Marvel Cinematic Universe between the heroes and the powerful warlord Thanos. With Thanos’ victory, half of the universe’s life suddenly turned to dust, leaving the remaining Avengers broken and defeated.  But a brief ray of hope appeared in the mid-credits scene, as Nick Fury, before disappearing himself, sent a message to someone on a modified pager. He was calling out for Captain Marvel, and now, almost a year later, we learn her story and how she met Fury many years ago. 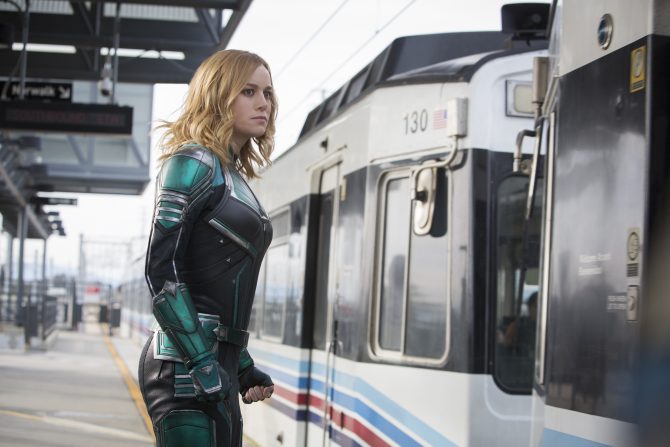 We first meet with our protagonist as she’s known as Vers, a super-powered soldier on the alien world of Hala, fighting for the Kree Empire (the Kree were previously seen in Guardians of the Galaxy and on the TV series Marvel’s Agents of SHIELD). Without any memory past the previous six years, Vers is haunted by a life somewhere else that she can’t explain. She channels her inner conflict into the Kree Empire’s war against the shape-shifting Skrulls, who are determined to find a light speed engine developed on Earth. As Vers recklessly follows the Skrulls, she finds herself in 1995 Southern California and goes on a journey to both hunt down the Skrulls and rediscover her former life as a human Air Force pilot named Carol Danvers. She quickly crosses the path of (eyepatch-less) Nick Fury, a young agent of SHIELD who’s fascinated by the sudden extraterrestrial threats and determined to help Carol defend the Earth from its new enemies.

The film takes a new approach to starting the story of Carol Danvers. Most movies adapted from comic books are forced to take on the difficult “origin story,” which has led to fatigue over these stories becoming too formulaic. Instead Captain Marvel starts in the middle of Carol’s story, as she searches to discover the origins of not only her powers, but who she was before she was a loyal Kree soldier. The move is one of the many fantastic ways the film separates itself from the films that came before it. Overall, the film feels fresh, but still offering elements from other films in the MCU. Alien battles, car chases, and dedicated soldiers are not new to Marvel movies, but Captain Marvel puts its own stamp on these tropes that makes the film all its own.

The movie’s setting gives ample opportunity to nostalgia and cool music drops, while at the same time placing the movie in a timeframe that makes sense, storytelling-wise, within the massive universe. Carol’s story turns out to be a sort of origin story for Nick Fury as well, as we see a younger version of the character (actor Samuel L. Jackson was digitally de-aged for the role) discovering that the world is much bigger than he previously imagined, sowing the seeds for becoming the mentor figure to the present day superheroes, the Avengers.

Audiences will no doubt be drawn to the film due to it being the first Marvel film to be headlined by a female superhero. It isn’t unusual to see ladies fighting the bad guys in the MCU (Evangeline Lily’s the Wasp was featured just last summer in Ant-Man and the Wasp), but it is the first time for a character to be center stage, with all the action and storylines revolving around her. And the film definitely emphasizes the theme of empowerment, metaphorical and literal. Carol has to fight, both as a Kree soldier and in her previous life as an Air Force pilot, to overcome the expectations of those trying to keep her down, to the point of sometimes forgetting her own power. Discovering who she is and where her powers lie is her true journey, which may mean having to turn away from those she thought she could trust. 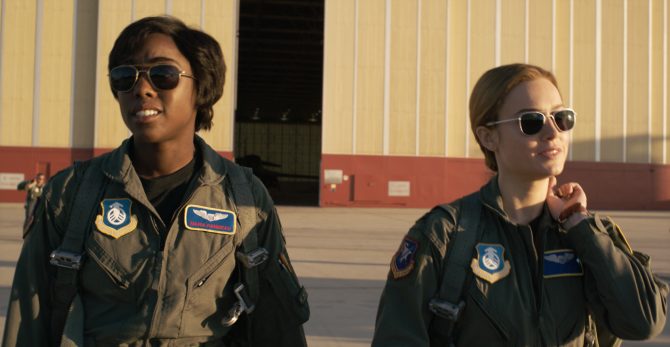 Captain Marvel is an absolutely solid film with enough twists to stay interesting in a first film installment that could have gotten swept under the rug by the hype for Avengers: Endgame, the massive conclusion to Infinity War coming out in April. But if anything, Captain Marvel has raised the stakes and built even more hype for audiences to see Carol in action once more. The movie had a lot to live up to with expectations for the remainder of the MCU so high and so secretive, but it absolutely served its purpose, not only as a bridge to the epic battle of Endgame, but as a memorable addition to the ever-expanding Marvel Cinematic Universe.

Visit here to see interviews with the cast and creators of Captain Marvel, including their favorite things from the 90’s! Captain Marvel is now playing in theaters: