How Bo Peep Has Evolved for Toy Story 4

While Toy Story 4 has a lot of new characters as part of its story (like the amazing Forky), I am thrilled about a beloved character that’s returning after twenty years: Bo Peep! Bo is back, and she has not only a new redesign but also has evolved in her personality. When I visited Pixar Animation Studios last month, we were able to learn more insight about creating the new Bo.

At Pixar Animation Studios we were able to meet with Story Supervisor Valerie LaPoint, Story Artist Carrie Hobson, Characters Modeling Artists Mara MacMahon & Tanja Krampfert, and Directing Animators Patty Kihm & Becki Tower. Of course for any Pixar film, a big part of designing (or in this case, re-designing) a character is research. The team working on Bo Peep’s redesign went to many doll shows to get inspiration for her clothing. 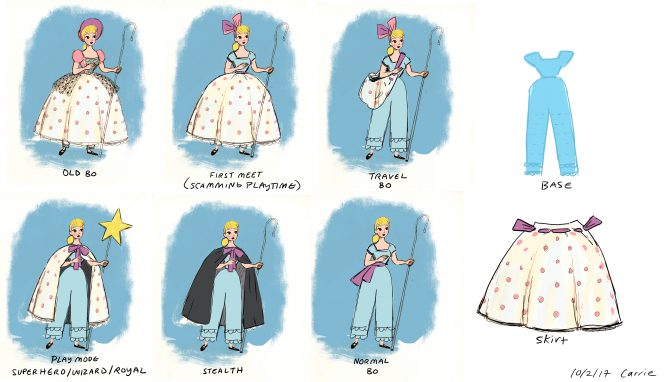 In the above concept art, you can see how they used their research combined with the new Bo, who is more adventurous and scrappy, to morph her original doll outfit into the one she’s wearing in Toy Story 4. The lining of her skirt is dark purple, which is being worn inside out as Bo’s cape. Her primary outfit piece, the blue jumpsuit, were the bloomers underneath her dress. Her hairbow and button on her cape are pieces Bo has found out and about on her adventures as a lost toy. 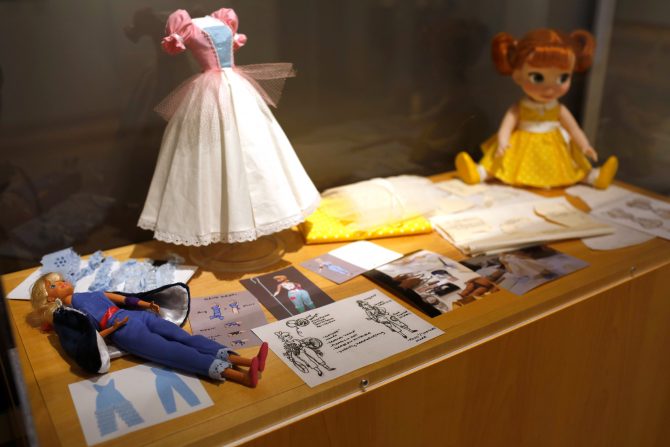 The Toy Story 4 art gallery, as seen on March 18, 2019 at Pixar Animation Studios in Emeryville, Calif. (Photo by Deborah Coleman / Pixar). The Pixar Animators made Bo Peep’s outfits in real life to see how they would move and look on a real doll.

In addition to a new outfit, they also had to re-rig her character. When she was last animated twenty years ago, the tech for computer animation was so vastly different, so they had to reconstruct her rig from scratch. To help with the process, they pulled out the original maquette of Bo made for the first Toy Story. It is one of the oldest pieces in the Pixar Animation Studios Archives! 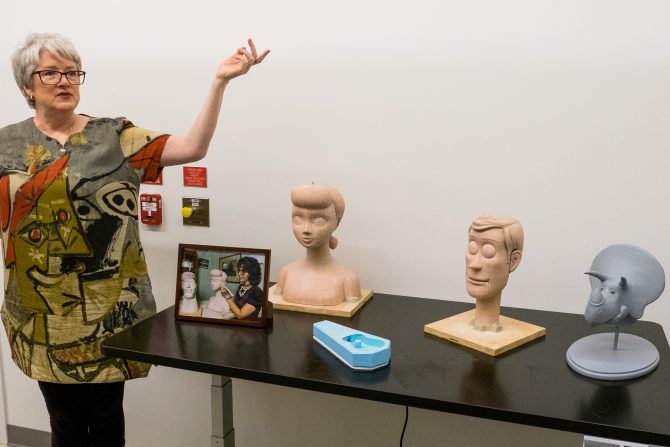 The team behind Bo Peep in Toy Story 4 wanted her re-design to reflect her character: A girl who isn’t necessarily a tomboy, but isn’t “girly” either. She is adventurous and brave while having a feminine look. They wanted to reflect that both those qualities can co-exist.

From the first two Toy Story films, we know that Bo is a dear friend to Woody, is Molly’s toy, has sarcastic humor, and was part of a lamp for a nursery. Toy Story 4 really dives more into who Bo Peep is, as well as where she has been for the last twenty years. The team behind Bo Peep shared that because she was a nursery lamp, her time with kids is very short, unlike for Buzz and Woody. She favors life as a lost toy, where she can play with kids who find her in the park, etc instead of having one long term kid. Bo realizes she can get the most out of life as a lost toy.

THEN AND NOW – Filmmakers behind “Toy Story 4” were committed to keeping the new film in the same universe as the original “Toy Story.” But 24 years have passed since “Toy Story” debuted and the technology—as well as the experience and knowledge of the people behind it—has advanced lightyears, so to speak. These images showcase those advances in terms of character shapes and textures, rigging, rendering and lighting. Directed by Josh Cooley, “Toy Story 4” opens in U.S. theaters on June 21, 2019. ©2019 Disney/Pixar. All Rights Reserved.

Part of this more independent self-sufficient Bo Peep is that she is unlike other toys, in that she can break away from her default toy mode. Most other toys go in a certain pose or have a default expression whenever a child is playing with them. Bo Peep in Toy Story 4 chooses different poses and expressions she has when a different child is playing with her. She has the freedom to change things up since she doesn’t belong to just one child.

After coming back from my trip at Pixar Animation Studios, I was even more excited to see more of the new Bo! Inspired by the Toy Story 4 poster, where Bo is in her new look with a fierce pose, I went to the Santa Monica Pier’s ferris wheel at night to do a Disneybound of Bo’s jumpsuit, along with my husband who Disneybounded as Woody, and my daughter Forky! We had a lot of fun giving a nod to the new Bo and trying to recreate the look of the poster in real life! 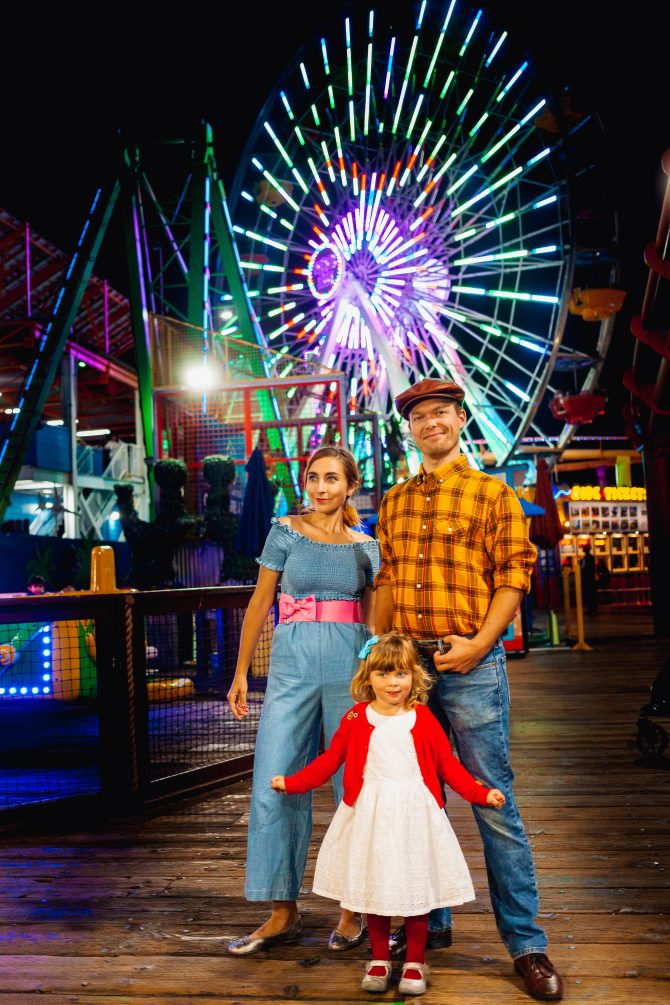 Tickets Are Now on Sale!

Toy Story 4 comes to theatres on June 21st. Advanced tickets to see Toy Story 4 are now on sale! On Fandango.com, you can find tickets as well as information about two special fan events! The Opening Night fan event, where guests can experience the movie first on June 20th, as well as received a set of Toy Story 4 collectible character cards, and a special event-only concession. There will also be Toy Story 4 movie marathons, where starting on June 20th you can watch all of the Toy Story movies, finishing off with Toy Story 4. At the event, you will receive an exclusive Woody pin, a set of collectible character cards, and a special event-only concession offer. Stay tuned for a lot more Toy Story 4 content, including more about my visit to Pixar, and my upcoming trip to Walt Disney World for the press conference. 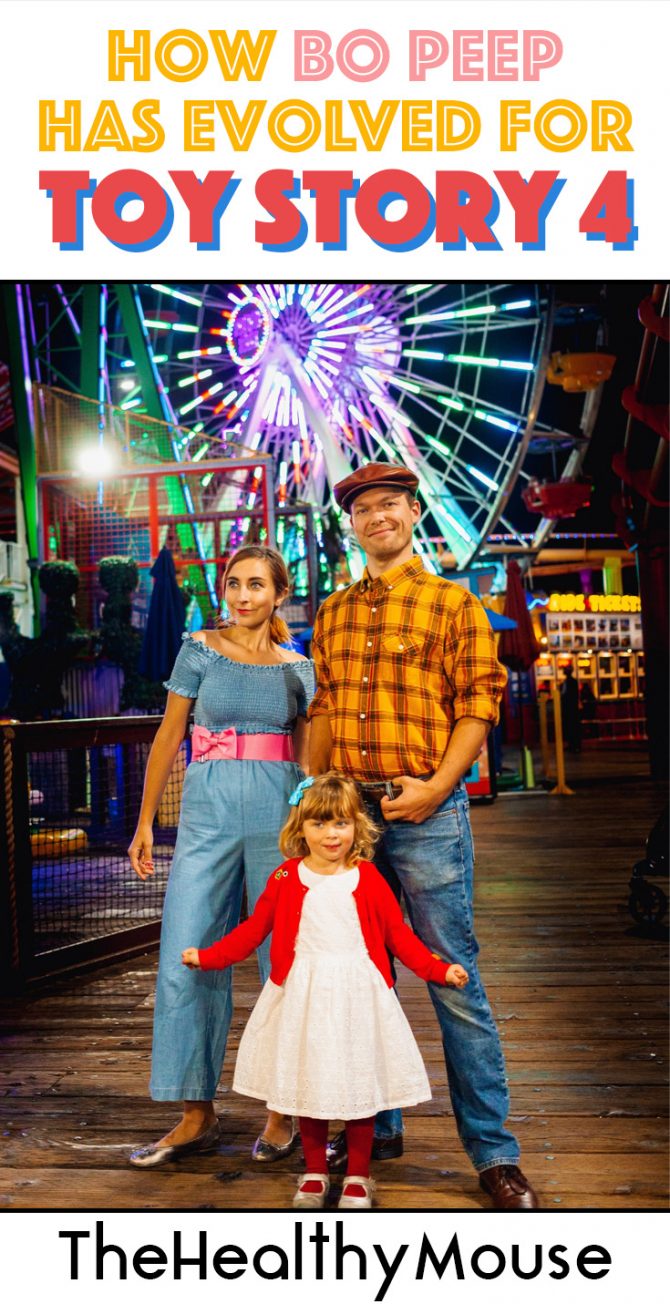