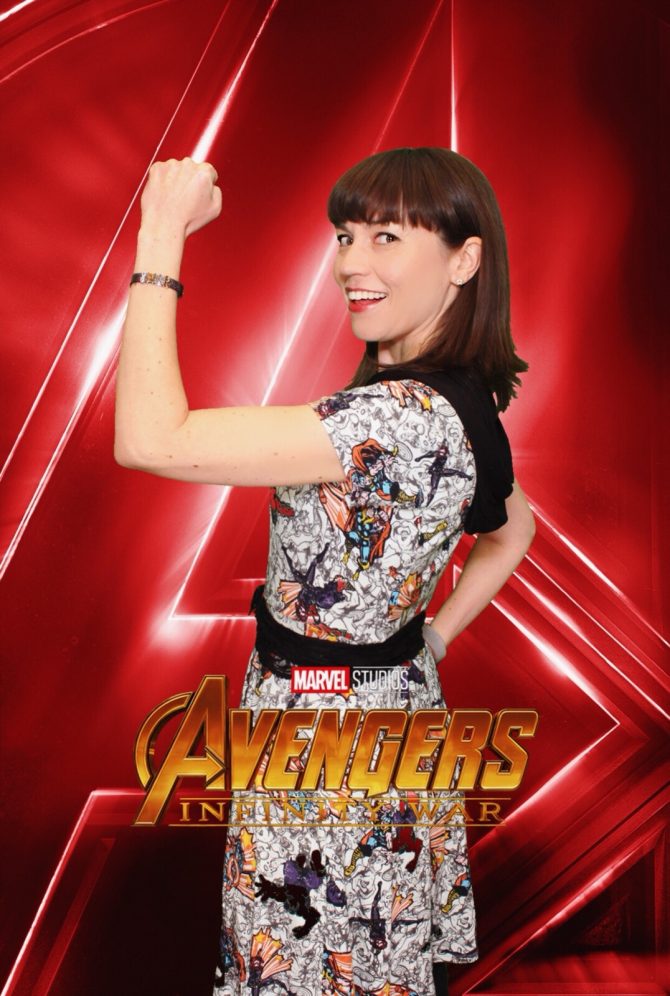 Hi, everyone! I’m Melanie Gable and I’m filling in for The Healthy Mouse to share my experience attending the press conference for “Avengers: Infinity War”! (Huge thanks to Jessica for inviting me to attend in her place!) Nearly every starring cast member was present at the conference, held at the beautiful Montage Hotel in Beverly Hills, California, and I, for one, was completely star-struck. But about the movie…

“Avengers: Infinity War” features a villain far more threatening than any that the Marvel Cinematic Universe heroes have fought before: Thanos (Josh Brolin), an infamous intergalactic tyrant who is doggedly pursuing the six Infinity Stones, which will give him the power to make humanity, and the entire universe, bend to his will. Marvel Studios has been building to this climactic film for 10 years, weaving the stories of multiple superheroes from Marvel’s cinematic franchises to come together to fight the deadliest of foes.

Avengers: Infinity War Interviews With the Cast and Creators

Sunday’s press conference featured a dizzying array of stars and was moderated by an actor Robert Downey Jr. called a “national treasure,” Jeff Goldblum! (Marvel Studios fans know him as the Grandmaster.) The Q&A was conducted power ball style, with Goldblum pulling colorful balls from a container with question prompts such as, “Ask a question of someone who wears a cape,” or “Ask a question of someone from Wakanda.” Goldblum was as hilarious and charming as he is on screen, which added even more fun to the proceedings. 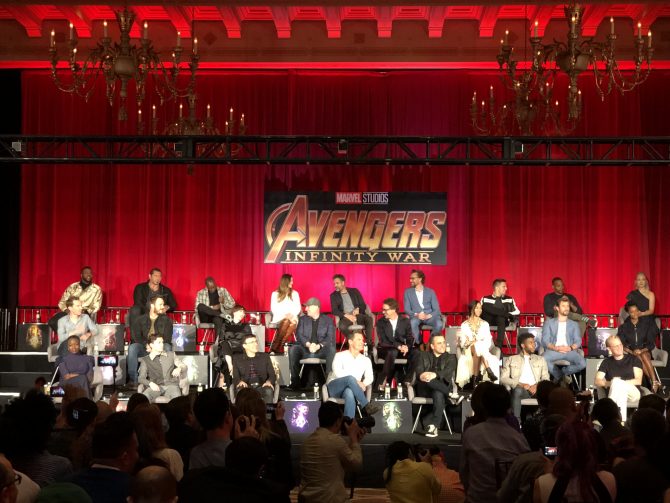 The first question, as luck would have it, went to Iron Man himself, Robert Downey Jr. The Marvel Cinematic Universe began in 2008 with the release of “Iron Man,” so it was fitting that Downey Jr. spoke first, asking one of the press, “Black Panther or Iron Man?” The young man responded, “I gotta go Black Panther,” and Downey Jr. said, “Me, too. We had to get that out of the way.” When asked if he would be appearing in “Avengers 4,” Downey Jr. jokingly asked the film’s producer, Kevin Feige, to whisper the answer in his ear. The actors were actually unable to answer several of the questions thrown at them due to the secrecy surrounding the movie and the risk of revealing spoilers, but they all did their best to entertain the audience with their answers, even if they couldn’t go into specifics.

Feige was asked how he managed to ground the movies, given the many plot and character threads that needed to be woven together. He shared that it always circled back around to the comics, and that several storylines and direct images were taken directly from the pages of Marvel comic books. Directors (and brothers) Anthony and Joe Russo spoke about the joy of finding different ways to bring the characters together and creating interesting combinations among the heroes. In an earlier interview, Joe Russo said, “It is a story that consumes the entire Marvel universe and it has one overarching theme to it, which is, ‘what does it cost to be a hero in a world where there are no easy answers?’”

And often there were no easy answers to the questions asked during the conference, especially given the pressure to conceal plot details. Overall, the cast seemed delighted and grateful to be involved in a movie so many years in the making and so full of talent, from the original Avengers – Iron Man, Thor (Chris Hemsworth), The Hulk (Mark Ruffalo), and Black Widow (Scarlett Johansson) – to the latest heroes from “Black Panther” – Chadwick Boseman (Black Panther), Danai Gurira (Okoye), Winston Duke (M’Baku), and Letitia Wright (Shuri). (Chris Evans, a.k.a. Captain America, was absent from the conference, unfortunately.) Fan favorites The Guardians of the Galaxy attended, including Zoe Saldana (Gamora), Dave Bautista (Drax), Pom Klementieff (Mantis), and Chris Pratt (Star-Lord), who was asked how his character felt upon seeing Earthlings for the first time in 30 years. Pratt responded that it would be best for viewers to actually watch his character’s reaction, rather than listen to him describe it, choosing to instead talk about bass fishing, cracking up the audience by going so far as to describe his fishing pole and techniques. Saldana covered a more serious topic – representation of people of color in Hollywood films – and said she was very happy with the changes happening in the film industry, which are opening doors for actors of all ethnicities to “continue growing and connecting with audiences.”

One of the most awkward and hilarious moments of the conference was when Scarlett Johansson was asked about the “fashion elements” in the movie by a young foreign journalist, who apparently hadn’t heard of the #AskHerMore campaign. After seeming a bit aghast that she was stuck with “the fashion question,” she jokingly teased the young man by responding, “I wear a leather unitard for most of this film, and I have been for the last 10 years…I have a new vest in the film, so that was pretty exciting.” I would have been interested to hear Johansson talk about how she felt about Black Widow’s character arc since the first Avengers movie, but it was fun to see her be a bit silly, which is something we don’t get to see much of from Black Widow. The “fashion question” then became a running joke among the cast members and several of them, including Dave Bautista, commented on their own “fashion elements,” in real life and in the movie.

After the conference concluded we were invited back into the lobby for photo opportunities with props from the film, as well as Avengers merchandise from Disney Consumer Products, including a Hasbro “Infinity Gauntlet,” which I of course had to try out. Marvel Studios also provided us with gift bags, which contained a t-shirt, toys and home product tie-ins for the movie. (My daughter loved the Captain America action figure!) 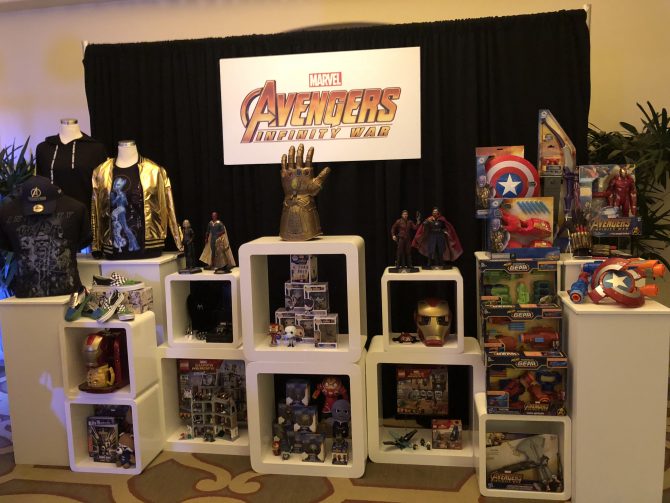 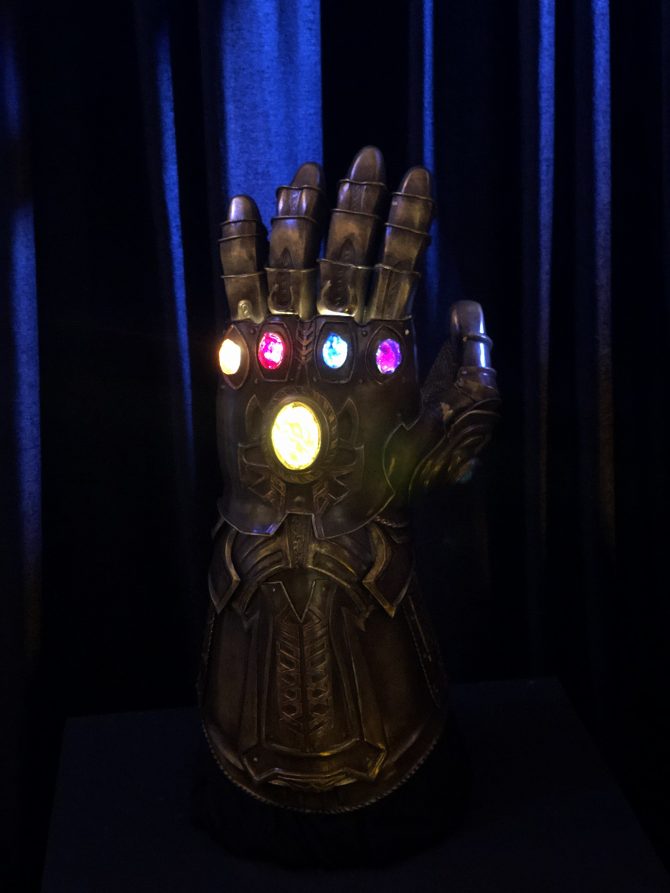 The actors had by that time broken off into individual interviews with some of the journalists, and as I made my way to that area of the hotel to see if there were any more activities or photo ops, I almost ran into Paul Bettany getting on the elevator! (He smiled kindly and I’m not entirely sure how I responded. I think my jaw dropped in surprise, and then maybe I smiled back? Who knows.) After the shock of seeing Bettany in person, I stationed myself, wallflower style, near a big plant in the hallway where the actors were being transitioned from room to room so I could enjoy some (possibly not-so-subtle) stargazing. Chris Pratt, Chris Hemsworth, Pom Klementieff, and Anthony Mackie all ended up walking right past me, much to my delight, and one unexpected celebrity in particular caught my attention as he chatted in the hallway – Conan O’Brien! He and Andy Richter were at the Montage to film a segment with some of the cast of the movie, and he was very gracious and charming when I approached him to say hello. I shared that I’m a big fan of his and just wanted to meet him, and he offered to take a picture with me! It was pretty surreal to be posing for a selfie with a superstar comedian who’s made me laugh for over 20 years, but that was the icing on the cake of my already amazing experience attending the press conference. 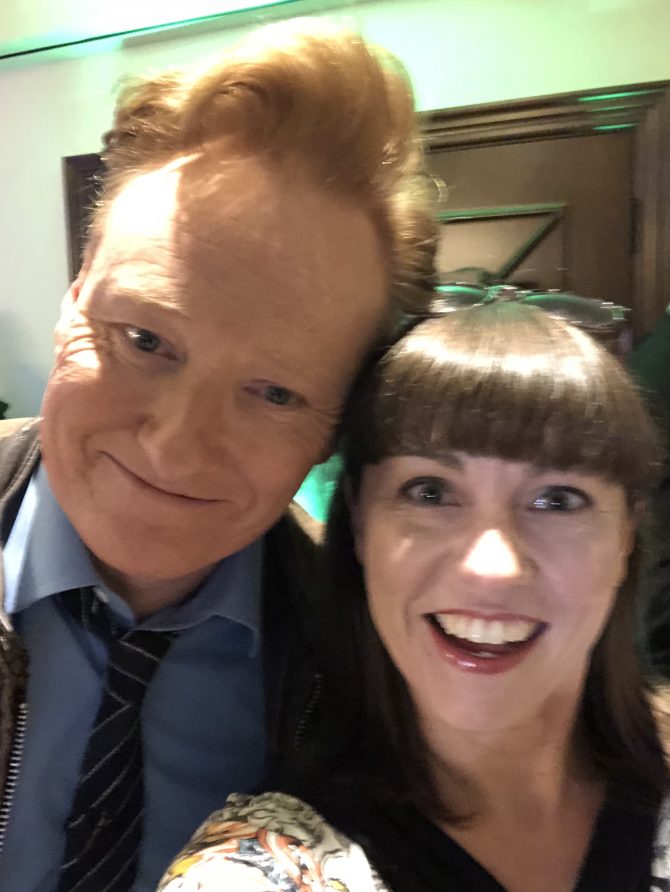 Special thanks to Disney and Marvel Studios for bringing so many fantastic actors together to talk about the movie, and thank you especially to The Healthy Mouse herself, Jessica McDonald, for inviting me to cover the event for her! “Avengers: Infinity War” opens on April 27 and promises to be an action and star-packed blockbuster, you can find tickets for Avengers: Infinity War here. I’m excited to see some of my favorite Marvel characters team up for the first time to save the universe. Avengers, assemble!