One of the new characters we meet in Toy Story 4 is Giggle McDimples, probably the tiniest Toy Story character ever, but incredibly memorable! Inspired by Polly Pocket toys, Giggle McDimples is Bo’s best friend over the past few years during their adventures being lost toys on the road instead of in a kid’s room. Giggle is sweet, funny, has an infectious laugh, brave, and incredibly fierce (she has an important job of being head of pet patrol in MINIappolis after all). The voice behind the character is actress Ally Maki. From following her on Instagram, you can see she has a kind spirit and is an inspiring woman. Well today, I was able to actually meet her in person! But first lets take a look at this amazing new addition to Toy Story:

Upon entering the conference room where the interview took place, Ally Maki entered giddy and excited to get to talk about her character Giggle! After meeting her in person, I can attest to the fact that she laughs just like Giggle McDimples in the movie – you can’t help but feel happy around Maki! Upon sitting down, we could see she was showing some flair to represent Giggle by having a statement nail with a little Giggle painted on her finger – which is probably the actual size of Giggle if she were real! The first question I was wondering was how she learned she got the role. Just like how Pixar puts a lot of effort to make their movies special, they also create a magical moment to break the news to their actors they received a role in a Pixar film! 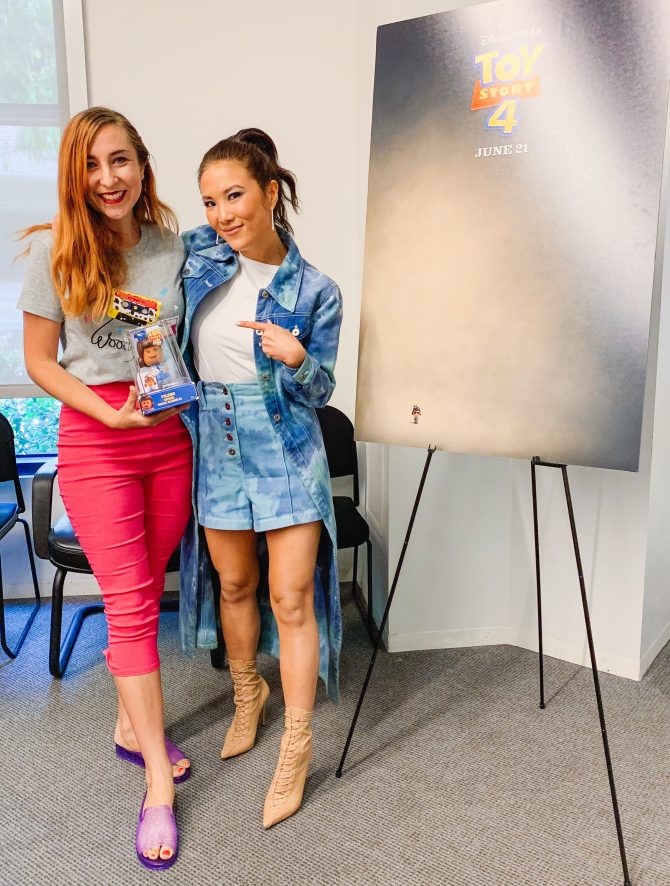 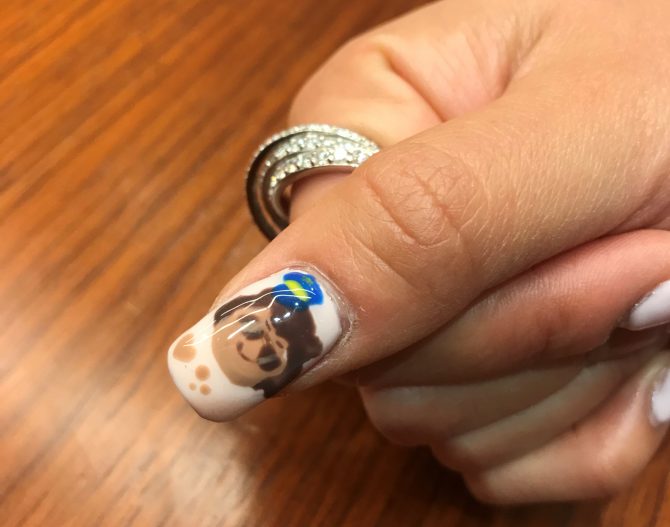 Ally Maki found out she was going to be Giggle with a fancy package in the mail. She received a letter with the Incredibles family on top that was addressed to her saying that Pixar would love for her to be a part of Toy Story 4. It also came with a big box complete with all the Pixar films, and a binder with early concept art of Giggles and of Toy Story 4 that she still has. Maki like many of us grew up with the Toy Story films and shaped so much of her childhood, so was so thrilled to be a part of this legacy. Aside from playing a character in a Pixar film, she was excited to play the first Asian American female Pixar character. Maki is actually the founder of the Asian American Girl Club, an apparel company that works to redefine what it means to be a modern Asian American woman, working to have representation in pop culture is a piece of her life she is incredibly passionate about. 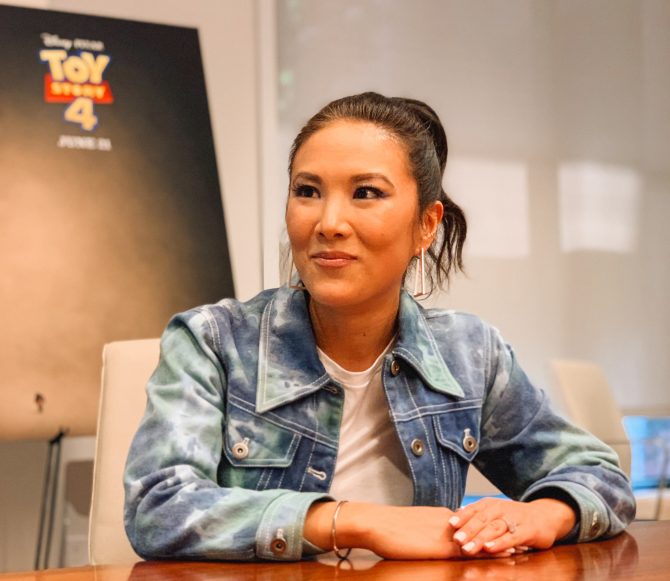 Maki landed this particular role from a no-budget YouTube video she made for fun, that was a spoof on 73 Questions on Vogue (You can watch it here). Someone at Pixar found it, ans said “That’s the girl! That’s our Giggle McDimples!” This was an incredibly inspiring thing to hear as a content creator. It goes to show that the content we create, whether for work or just for fun, if we are true to ourselves and pour passion into it, could result into big things we never thought possible. Fast forward to the Toy Story 4 World Premiere, where Maki was having an incredible time celebrating this remarkable achievement of being the voice of Giggle McDimples. She felt she was having the best night of her life, when it became even more perfect when she went to the Hollywood Roosevelt after the after party. There were rose petals in her room, and her boyfriend proposed two hours after the movie premiere! How adorable would it be to see a Giggle McDimples-size bride and groom on top of her wedding cake?

Last night was an ABSOLUTE DREAM. To wear all @dior by my dear friend and icon @mrkimjones to the #ToyStory4 premiere is something I will never ever forget. I remember I was at the airport messaging with him and by the time we had landed his team was on it in Paris @emanuelemc sending over looks Kim had hand selected- and my incredible stylist @zadriansmith brought it all to life. That’s how good and sweet and dear of a friend Kim is. I love you so much. I still can’t believe it!!! This girl is truly pinching herself forever. #diormen #toystory4 ?

To infinity and beyond ✨ I’ve always told you that you saved my life when I met you. I’ll never stop saying it…. you’re my best friend in the entire world the only person who can make me laugh until I cry and cry until I laugh. You fill every hole in my heart. You heal me. You understand every single quirky part about me and celebrate it all. Most of all you make me a better person. I love you so so much @travisatreo

Maki ended the interview with a sentiment that brought tears to my eyes! Growing up, she was very shy and self conscious about her laugh since people would comment frequently on it:

“Through Giggles I have learned to be more confident. and I’ve learned to embrace who I am and what I am. Like I said about my laugh ‘being too loud’ or me being ‘too much’ or being ‘too small’ or being Asian American…all of these things…it matters a lot for the next generation to see these type of women.”

You can see Maki as Giggle McDimples in Toy Story 4 beginning June 21st in theatres! You can read my review of the film here. 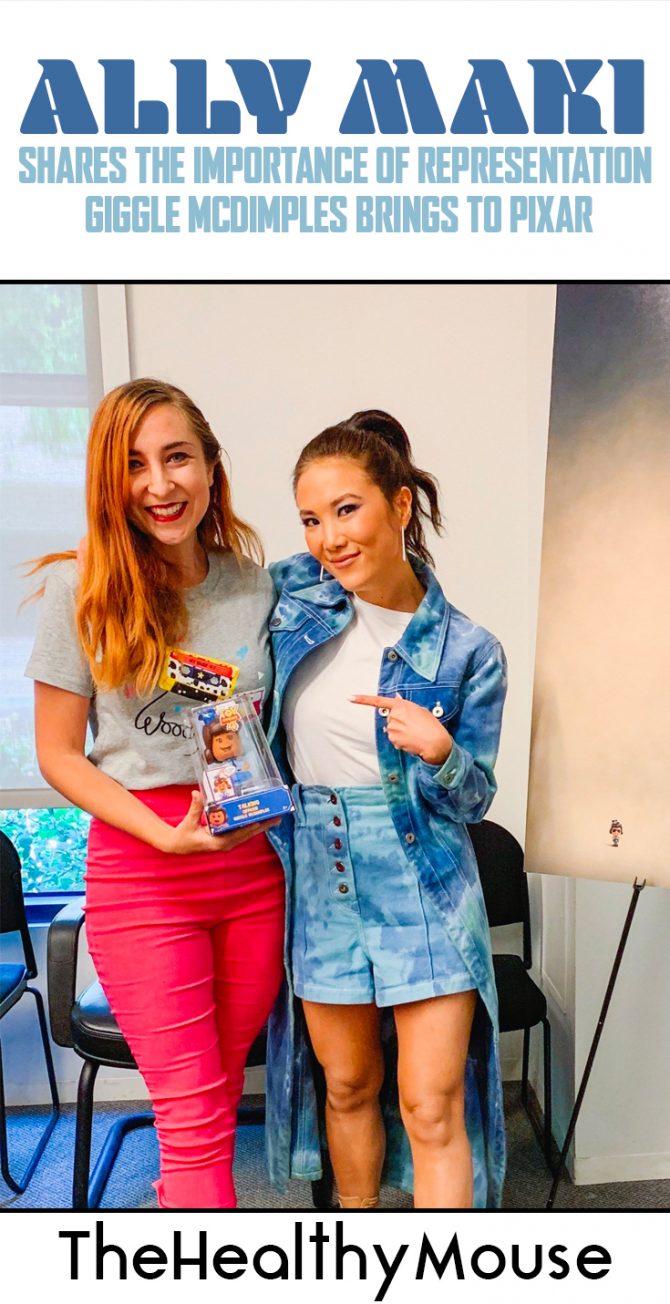