The latest in Walt Disney Studios’ line of live action remakes, Guy Ritchie’s Aladdin is a fun burst of joyful entertainment, every inch of the original, but in completely different ways. Set in the distant land of Agrabah (now explained to be a melting pot of different ancient cultures and people), the story format doesn’t differ much from the original 1992 animated film (yet still feels unique in many ways). Aladdin, a thief on the streets falls in love with Jasmine, the sheltered princess who is forced to marry a prince. Circumstances bring Aladdin into contact with a magical lamp that contains an all-powerful Genie, who offers him three wishes, which Aladdin uses to transform himself into a prince. 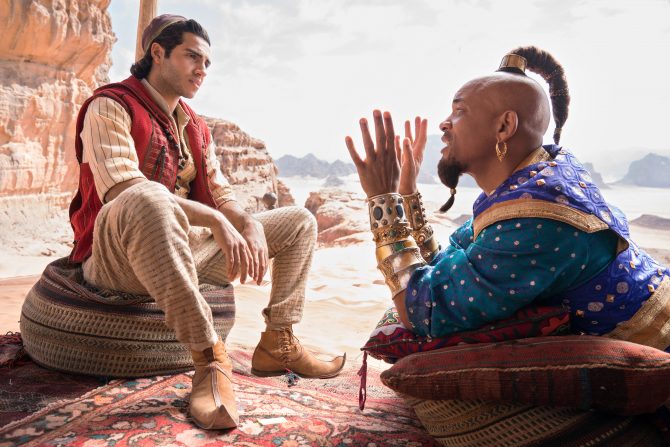 Mena Massoud as the street rat with a heart of gold, Aladdin, and Will Smith as the larger-than-life Genie in Disney’s ALADDIN, directed by Guy Ritchie.

Although each remake opens itself to the inevitable comparison, the new film is a brand new reimagining. The spirit of the original is very much the same, bringing incredible, kinetic energy and pure, feel-good entertainment to the screen in an all-new way. The live action format brings many new opportunities to the storytelling, character arcs, creating gorgeous sceneries, magical special effects, and dazzling musical numbers. All of the talent was perfectly cast in their roles, with my favorites being Will Smith as the Genie (literally, his performance is something I’ve been thinking about since seeing the film), Nasim Pedrad as Jasmine’s handmaid Dalia, and Mena Massoud as Aladdin.

How Do the Characters Compare to the Original?

When a remake of a movie comes out, I always wonder, will the portrayals be an imitation of the characters we know? Or will the portrayals be so different that it doesn’t fulfill the sense of nostalgia audiences want to experience with a remake. I felt like Aladdin was a remake that fit the bill perfectly, having a perfect balance of nostalgia and familiarity with still a great deal of fresh and new. I know there has been a lot of question of how the beloved characters of Aladdin will be in this new film, so I thought about it and did a breakdown comparing the original animated characters to the live action.

Don’t get me wrong, the comparisons and things I liked about the live action characters doesn’t negate my love for the original; the way the characters were written for the animated movie worked well for the story and for that format. I feel they are both amazing films in and of themselves. These were just some observations I had just for fun! 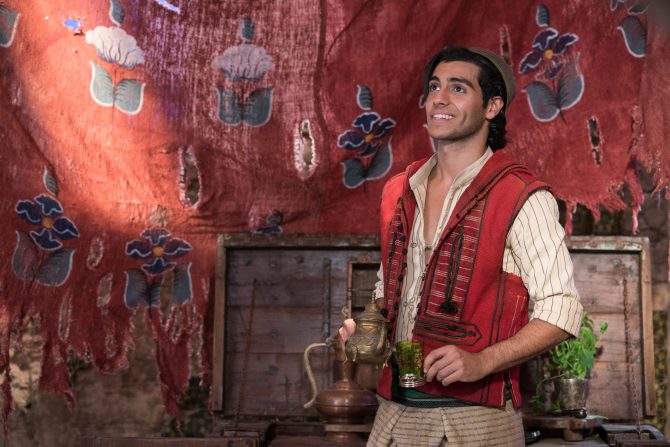 Mena Massoud definitely plays Aladdin as the street rat thief we all know and love, but I feel like the live action Aladdin is a bit more humble, with a larger character arc. These additions seemed to work really well for a live action re-telling and some slight rewrites in plot to give this Aladdin some more time to have great changes over the course of his story. He still has moments of selfishness, but I felt how he faces the consequences of his actions made his character stronger in this new story. 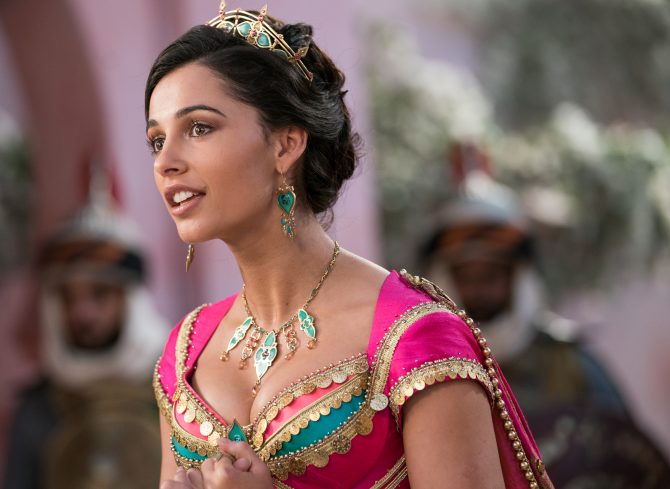 Like with Aladdin, this Jasmine (played by Naomi Scott) has deeper character motivation and a stronger arc. I feel like we also learn more about the princess in this film, in terms of her backstory and challenges. In the animated film, Jasmine tries to break free from her life and escapes the palace simply because “she doesn’t want to be a princess.” The Jasmine in the remake, on the other hand, isn’t upset about being royalty, nor does she try to escape her life, but instead finds herself trapped in a life where she has no voice, despite how much she cares for the kingdom and people of Agrabah (that’s all I’ll say for now to not spoil the movie). 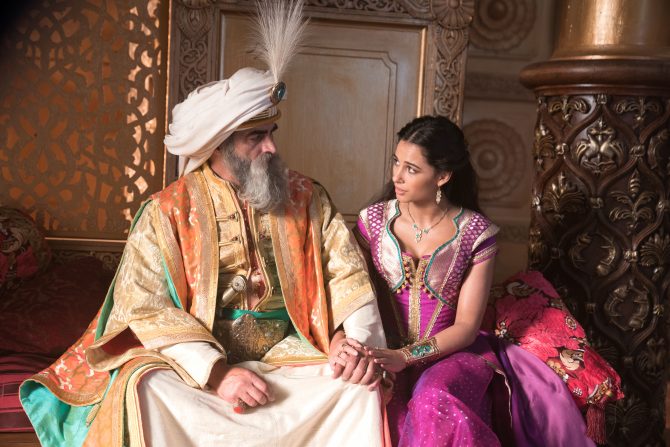 Navid Negahban is the Sultan and Naomi Scott is Jasmine in Disney’s live-action ALADDIN, directed by Guy Ritchie.

The Sultan in the original was goofy, dim-witted, and a bit aloof. The Sultan in this movie is wise, solemn, and more in tune with Jasmine’s frustrations. He is depicted as thoughtfully considering the balance of ruling a kingdom, being good to the people of Agrabah, while also protecting and loving his daughter. Even if his methods aren’t perfect, and include sheltering Jasmine, his intentions are well-considered and kind. 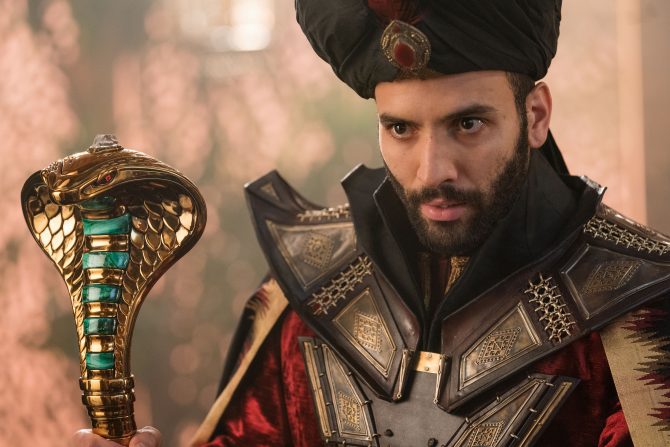 The nefarious villain of the original was a classic bad guy, without much motivation beside being evil. And while the animated Jafar was very good at being bad, for the live action, the character was wisely given a deeper backstory and motivation. This version of Jafar is a former thief (like our hero) and dreams of ultimate power and worldwide superiority. Marwan Kenzari brings humanity to the previously one-dimensional character, letting audiences understand him, but still never truly rooting for him. 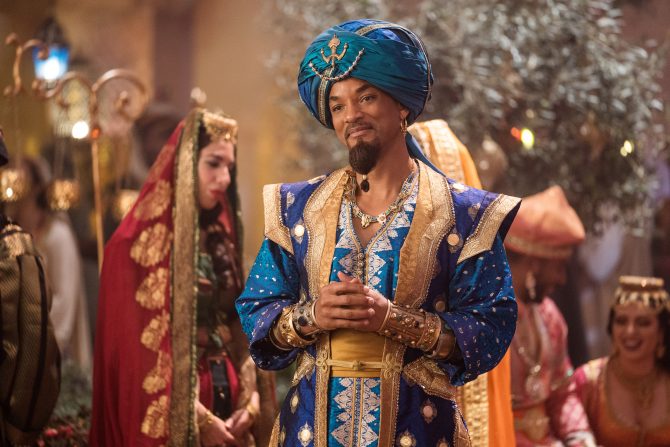 Will Smith is Genie in Disney’s live-action ALADDIN., directed by Guy Ritchie.

The role of Genie has carried the most hype and debate of the entire movie. As even Will Smith said, Robin Williams left some pretty big shoes to fill. Smith portrays the Genie with his own legendary “Will Smith” charisma, with a lot of heart and humor. However it doesn’t feel like he’s actively trying to sway from the spirit of the Genie character we are familiar with. He has (mostly) the same goals and the same irreverent personality. He plays it in his own distinct way, while still embodying who the original Genie is, bringing a sharp spark of entertainment that made the original such a success. This Genie isn’t as slapstick with pop culture references or impressions, but is more of a sarcastic humor.

Aladdin is Now in Theatres

You can find Disney’s Aladdin now in theatres! You can read about interviews with the cast and creators on making the live action remake of Aladdin here. Plus see my experience attending the World Premiere of Aladdin!