Disclosure: I was provided complimentary media tickets for my visit to Universal’s Volcano Bay, but all thoughts and opinions are my own.

I travel to Orlando, Florida about four times a year. I have done most of the theme parks numerous times, but never had done Universal’s water park: Volcano Bay. I absolutely love Universal Orlando Resort, but had never set aside time to go to Universal’s Volcano Bay because I’m not a huge water park person.

Don’t get me wrong, I love going down water slides and lazy rivers, I just often don’t like the “feel” of a water park (as most lack theming). I’m also NOT a fan of standing in line waiting for water park attractions since you are cold and wet in a bathing suit. On my most recent Orlando trip, I decided to give it a try since the weather would be warming up (they had been having a few cold weeks).

I not only enjoyed my time more than I expected, but I felt the most relaxed I had on my whole trip. I felt immersed and transported to a tropical island. And this is coming from someone who typically skips water parks. In fact, I loved it so much I’m now adjusting my next Orlando trip itinerary to include a day at Universal’s Volcano Bay with my family.

So how did Universal’s Volcano Bay turn my opinion around on making this a park I wasn’t sure I wanted to try to becoming a must-visit on my next Orlando trip? Below I lay out what I loved, and my top 10 reasons to visit Volcano Bay on your Orlando vacation. 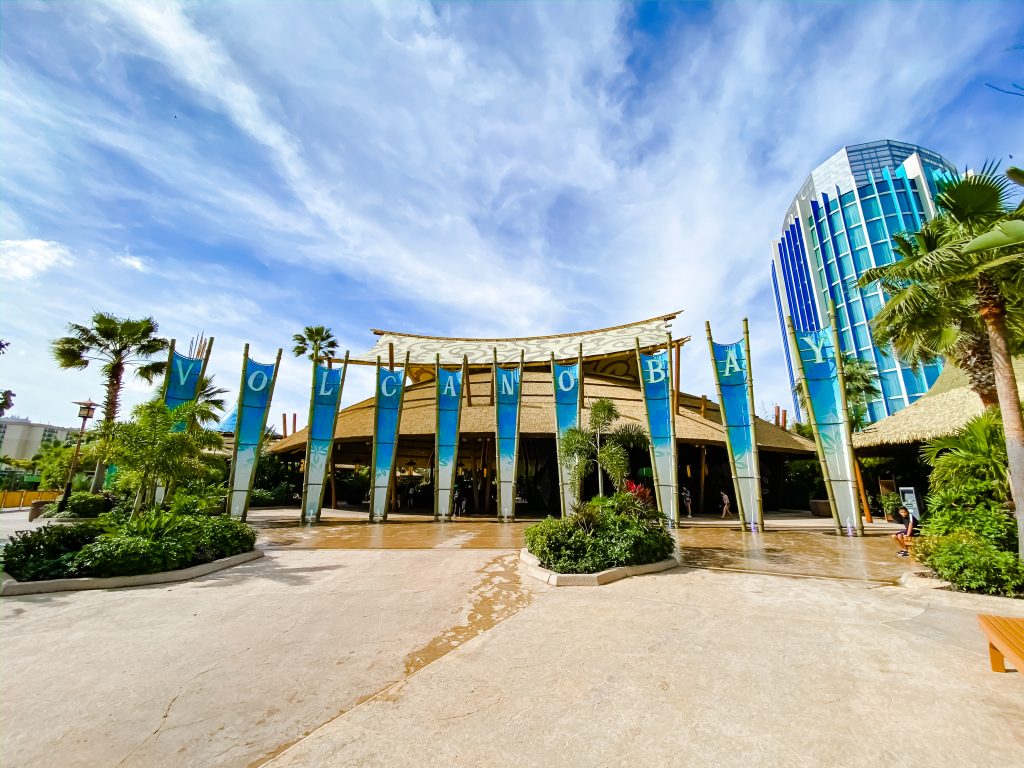 If you follow me on Instagram, you may know that I love everything tiki and tropical themed! Universal’s Volcano Bay does a great job of transporting you to what feels like a tropical island full of tiki culture. As you enter, you go through a stone tunnel and then taken to the Volcano Bay entrance. As you go through the turnstiles and walk through a path lined with tropical plants, you’ll instantly feel in awe over seeing the iconic park landmark, the volcano! 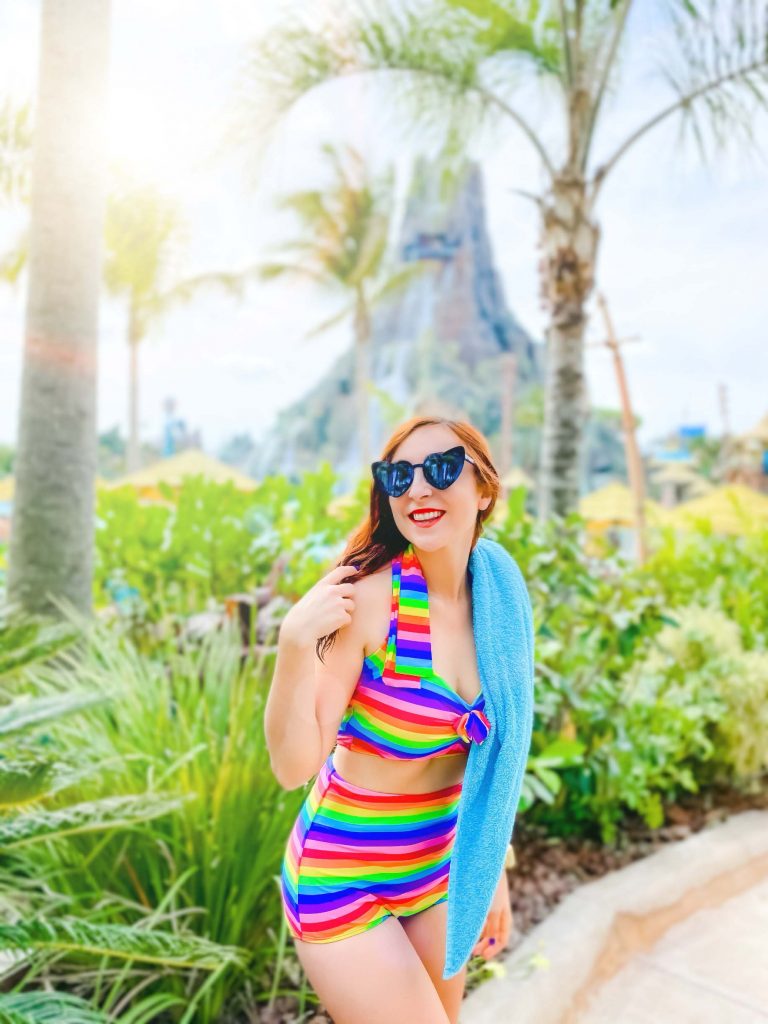 The volcano is surrounded by crystal clear pools, sand, tiki statues and plants. As a theme park nerd, I love immersive theming and Volcano Bay, in my opinion, is one of the top notch parks at any resort for immersive theming. So if that’s something you also appreciate, you’ll love it!

The pool leading up to the volcano is the park’s wave pool. It felt more relaxing than a typical water park wave pool, having a more natural wave a tropical bay would have, not too harsh at all. 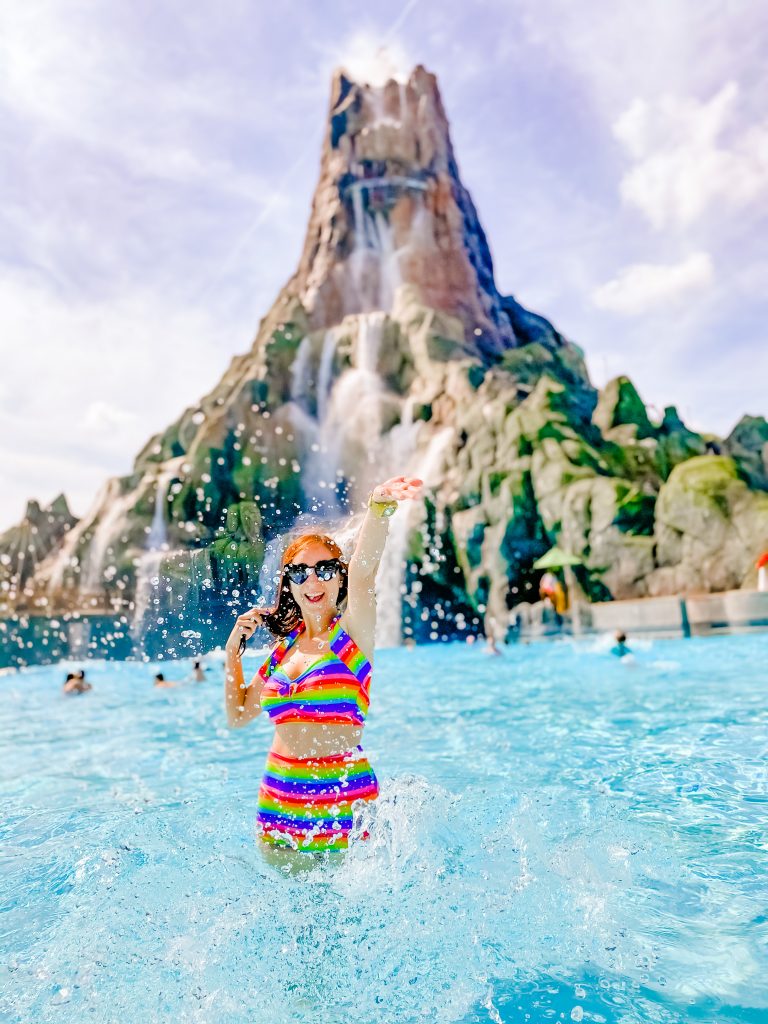 And of course what really makes the wave pool all the more enjoyable is it’s view of the volcano, and it’s proximity to the beach and lounge chairs. It really makes it easy to go back and forth from being in the water to relaxing with the sand and sun!

Universal’s Volcano Bay has lounge chairs on the sand that are complimentary. However there is the option to rent a cabana. The cabanas were gorgeous, particularly the ones that were elevated and overlooked the wave pool and volcano.

I really enjoyed the lounge chairs on the sand, but after seeing the gorgeous cabanas I’m definitely renting one when I go with my family! They include concierge service, a refrigerator with bottled water, complimentary fruit and snack basket, plus towel and water service (which is normally a nominal fee). You also can get food and drink delivered directly to your cabana.  You can learn more about cabana rentals here.

As I briefly mentioned, Volcano Bay has a BEACH! The lounge chairs facing the wave pool and volcano sit on the sand, with more tiki statues and tropical plants. It truly felt like being on the beach. 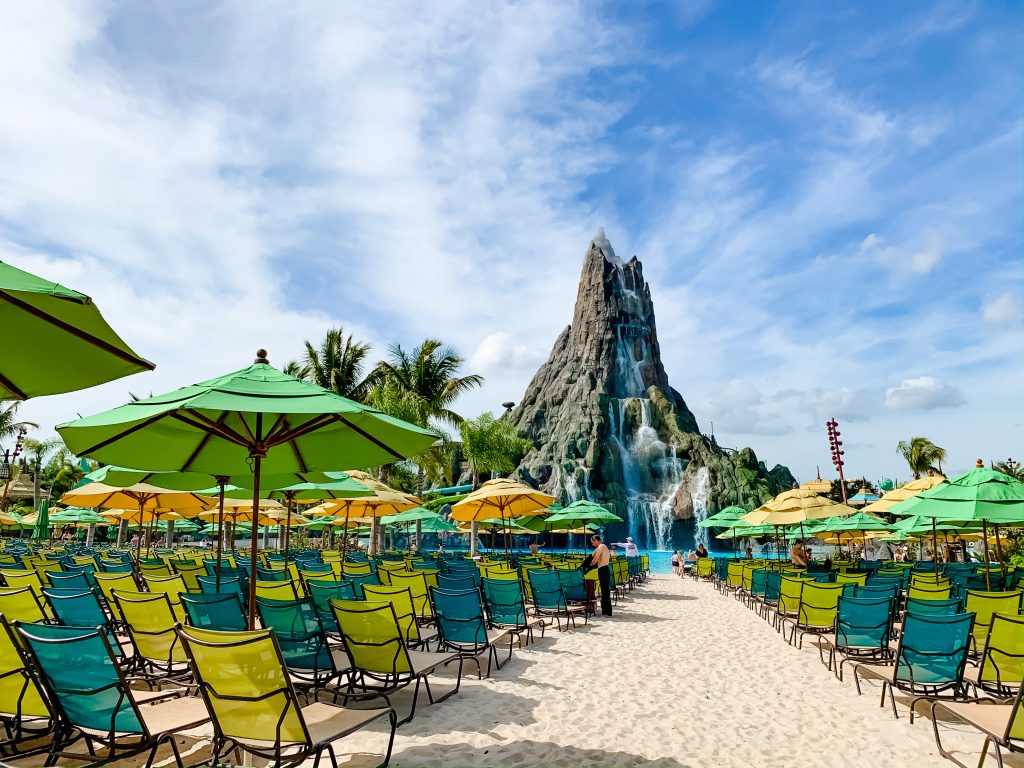 Waturi Beach added to the relaxing, tropical vacation feel of Volcano Bay. It makes this water park stand out since it doesn’t feel like you’re just at a pool like you’re average water park, but it really adds to the feeling that you’re on a tropical island. It’s also a great feature if you’re traveling with kids. I saw lots of kids playing in the sand, I know my daughter will love doing this when we go!

One of the dining options is a bar called Dancing Dragons that has a lot of tiki theming. I had a margarita, which was one of the best I’ve ever had. I loved this bar since it felt similar to ones I had been to in Hawaii. 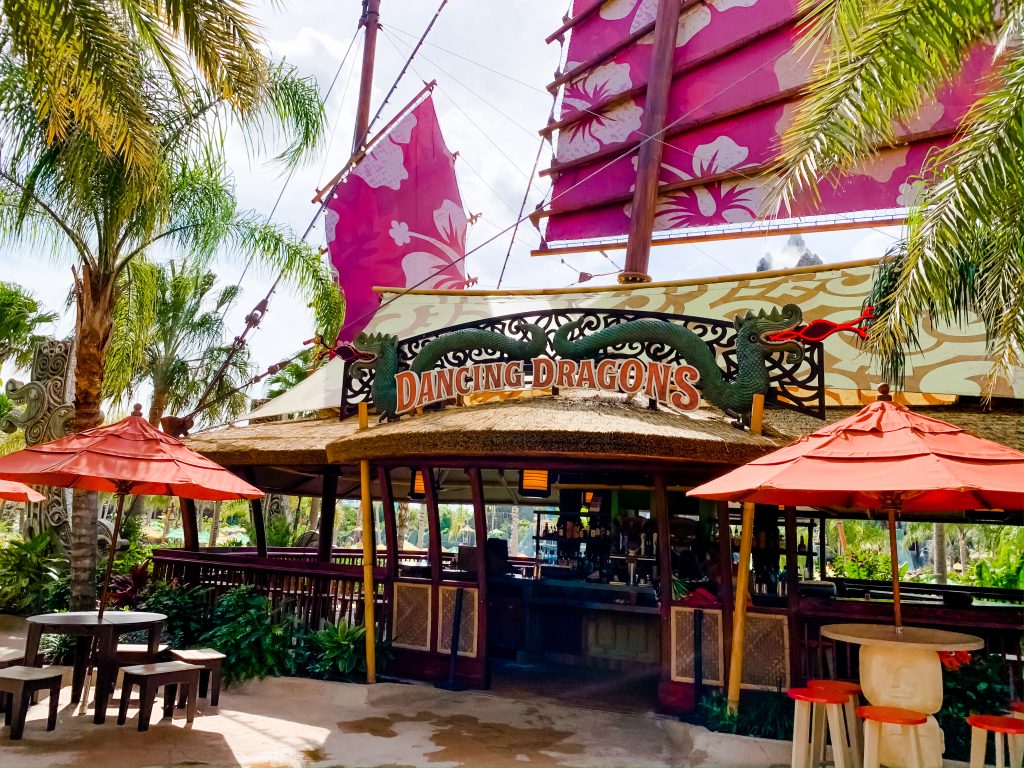 They have many seats that are facing Waturi Beach and the volcano, so it feels as if you’re looking out into the ocean! A pro-tip: You can bring your food you’ve ordered from Volcano Bay’s quick service restaurants and bring it over to Dancing Dragons to enjoy with your drink!

Something I did not know ahead of time: the volcano at Volcano Bay is also an attraction! The Ko’okiri Body Plunge is in the front of the volcano, and this very steep (seriously, it’s nearly straight down) body plunge is the size of the entire volcano.

You get to climb up the stairs through the volcano to enter it, then once you do the volcano plays special tiki music indicating someone is about to plunge! It’s quite thrilling.

The Kopiko Wai Winding River, aka the park’s lazy river, was the best lazy river I’ve ever experienced, and equally immersive as the park. It was honestly my favorite attraction because it allowed me to experience the immersive waters and tropical environment in a relaxing way (my speed). 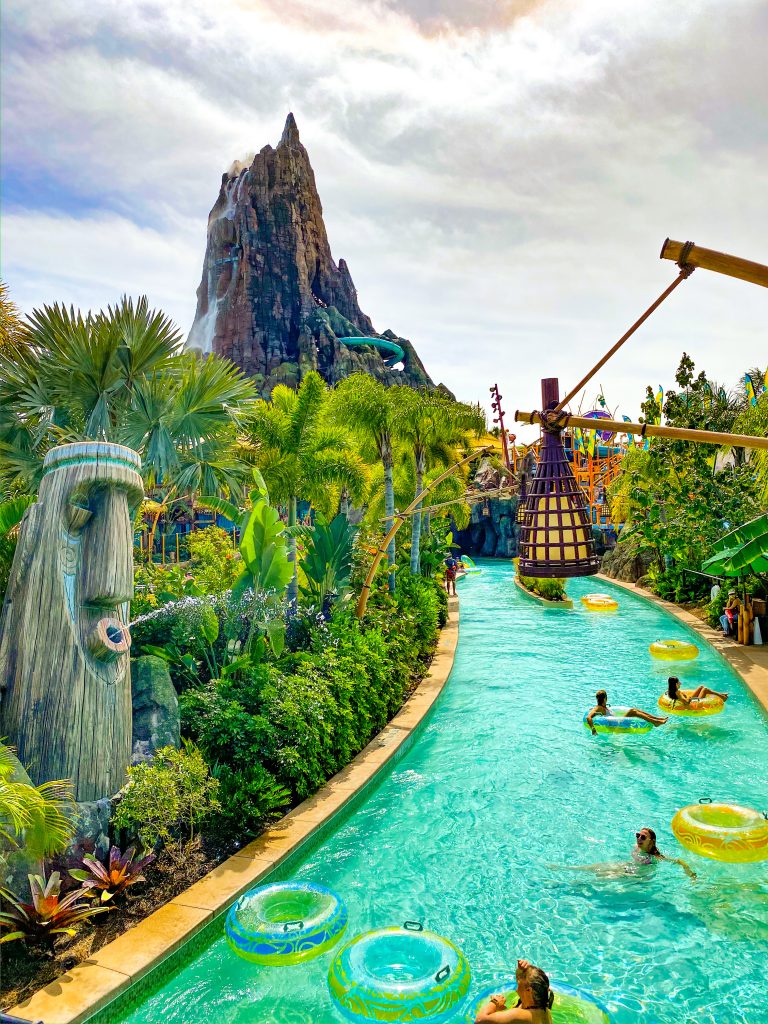 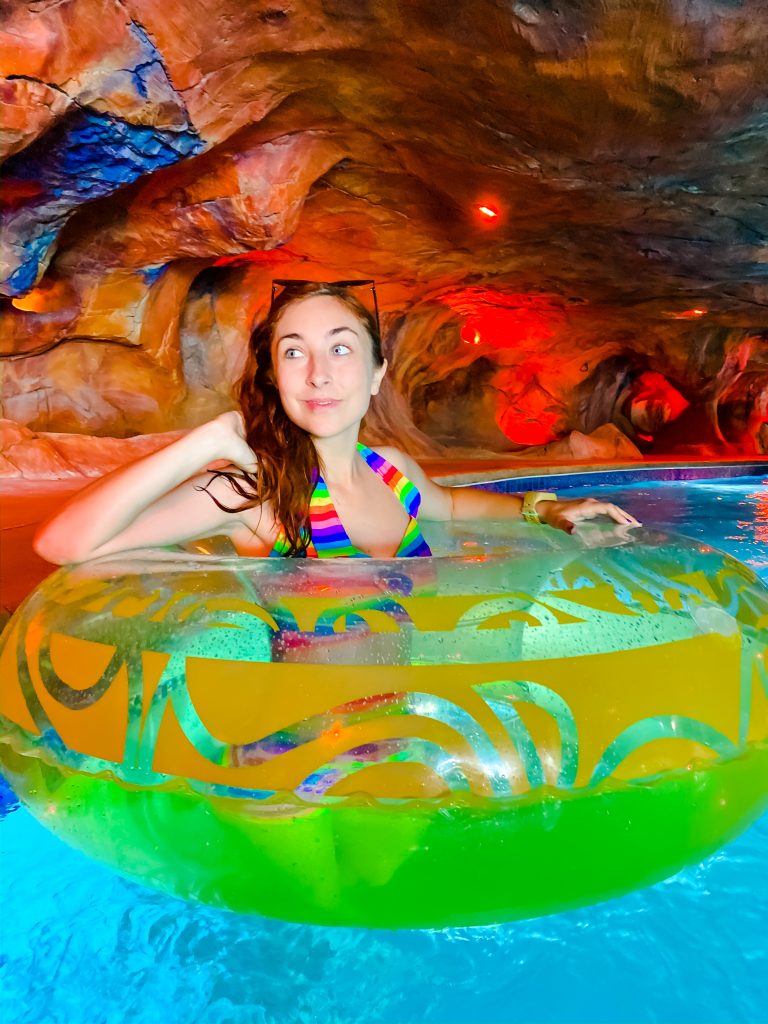 The water is incredibly warm which I loved. When you enter, you first go through an enchanted cave with twinkle lights up top. Then as you exit the cave, you’re back outside surrounded by tiki gods and beautiful tropical plants and flowers. Throughout the winding river there’s also multiple water falls. I could go around this river about 10 times it’s so relaxing and fun!

3. Friendly for All Ages

I felt that Universal’s Volcano Bay had a really good balance of offerings for all ages. There’s truly something for everyone. When I went I went with a friend, and as just two adults we had a great time. There’s a good balance between relaxing attractions and thrilling attractions for all types of theme park goers. 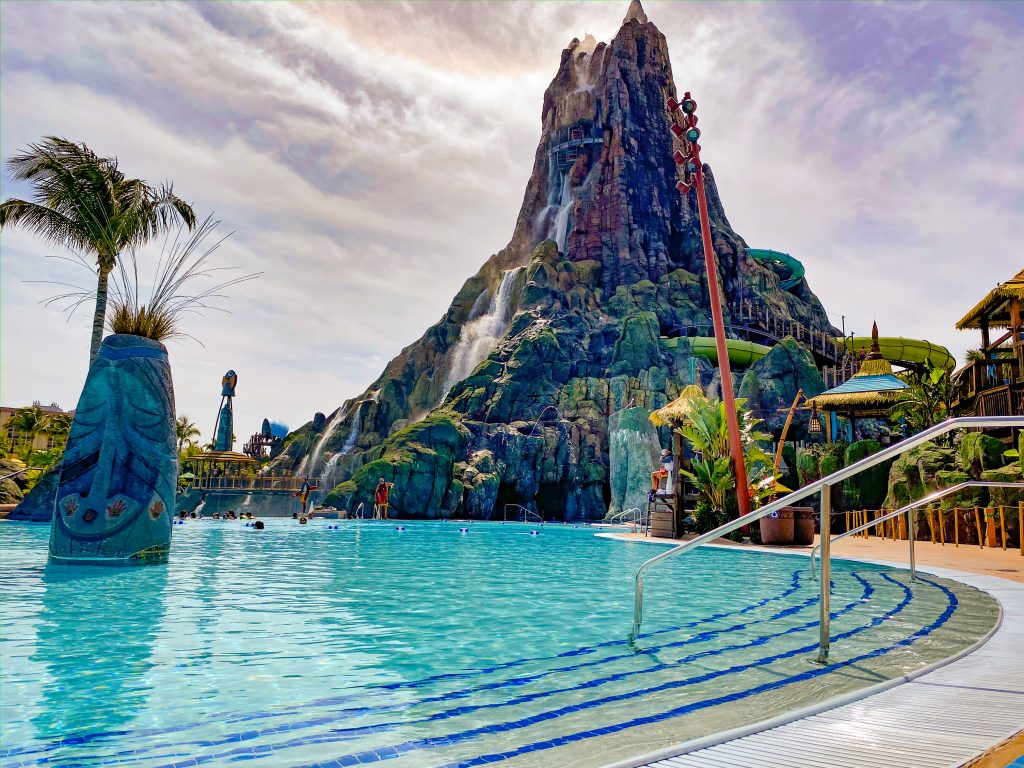 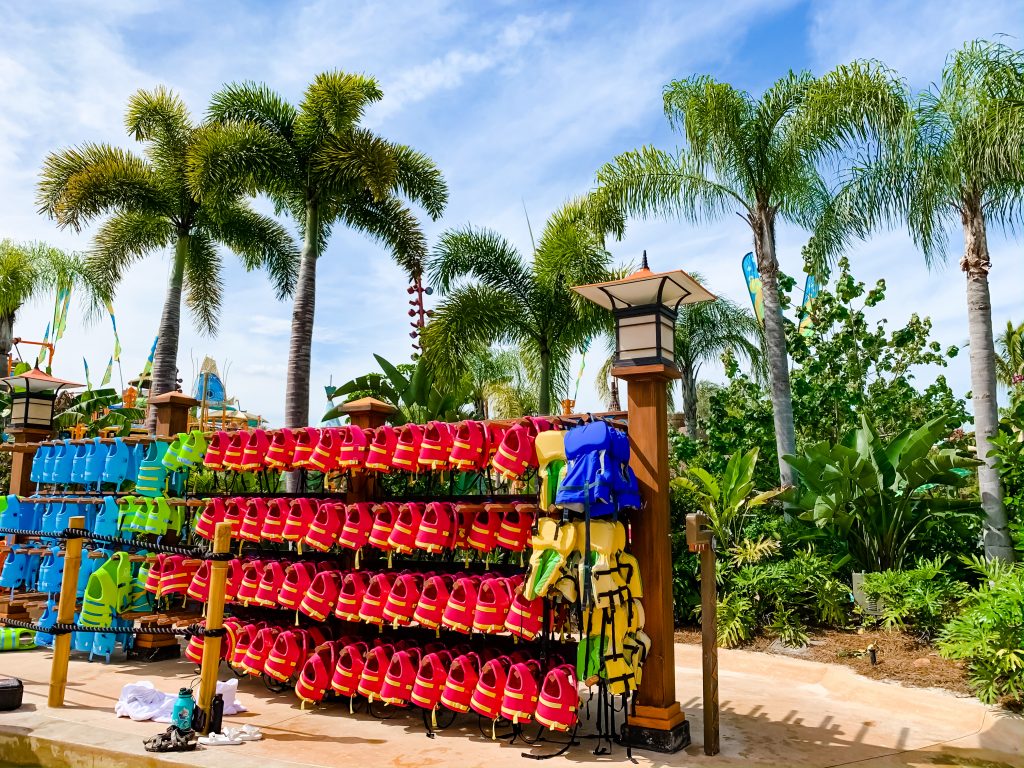 If you’re thinking if it would be good for little kids as well, there’s Waturi Beach and playing in the sand as I mentioned earlier. There’s also the leisurely pool called The Reef overlooking Volcano Bay, with complimentary life jackets in different sizes. There’s also a splash pad area called Tot Tiki Reef, and another water play area called Runamukka Reef. The lazy river is slow paced enough that with a life jacket on a toddler can easily go in the river too!

The TapuTapu band is a feature of Universal’s Volcano Bay I was most impressed by! When you scan your ticket into the park, you will get a TapuTapu band to wear throughout the day. The TapuTapu band really makes this water park experience convenient and better than any other water park. It basically allows you to not have to carry around your wallet, etc and save time not waiting in lines. 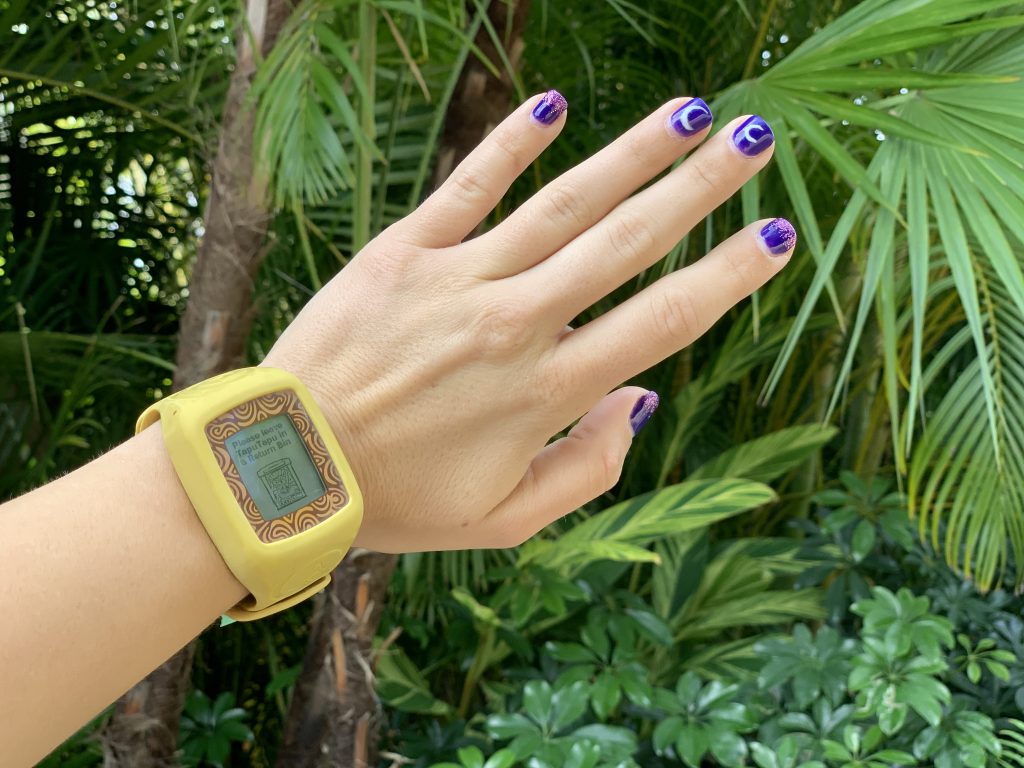 It works in conjunction with the Universal Orlando app. Create an account with the app, and scan your park ticket into it and add a credit card payment method to have on file. Once that’s done, you can scan your TapuTapu band to pay for food and lockers (it also is what you use to open and close your locker, so you don’t need a key. You don’t even need to remember your locker number, since every time you scan your band to open your locker it will open yours. In addition to being a payment method and locker key, but you also use it to enter virtual queues. 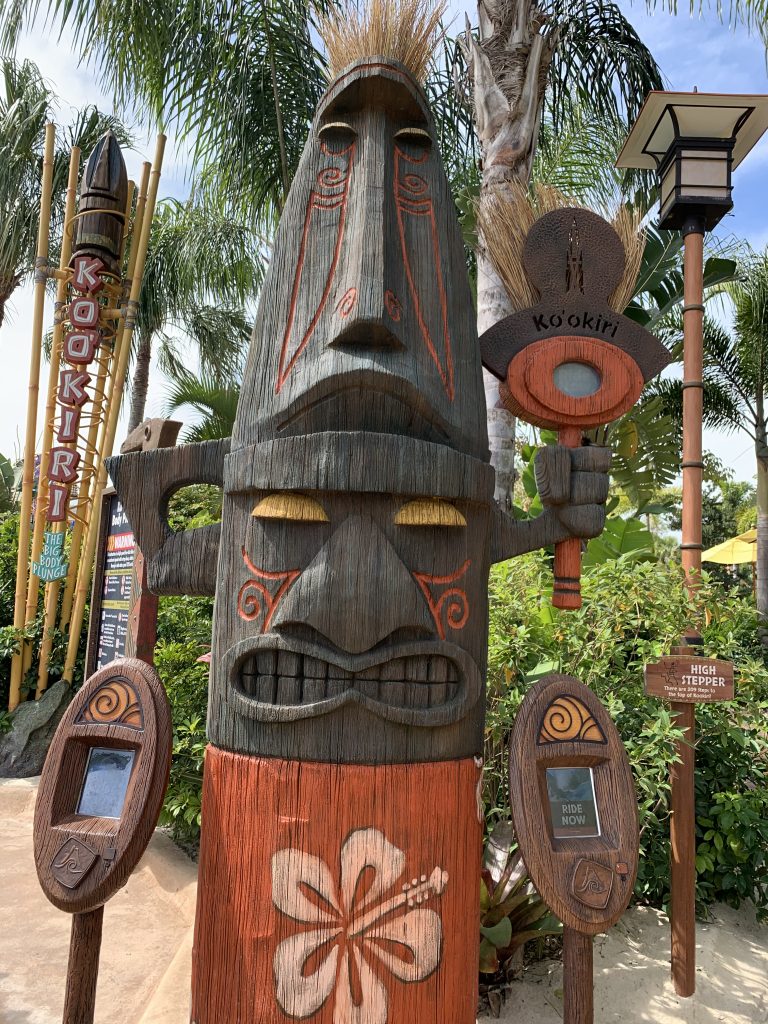 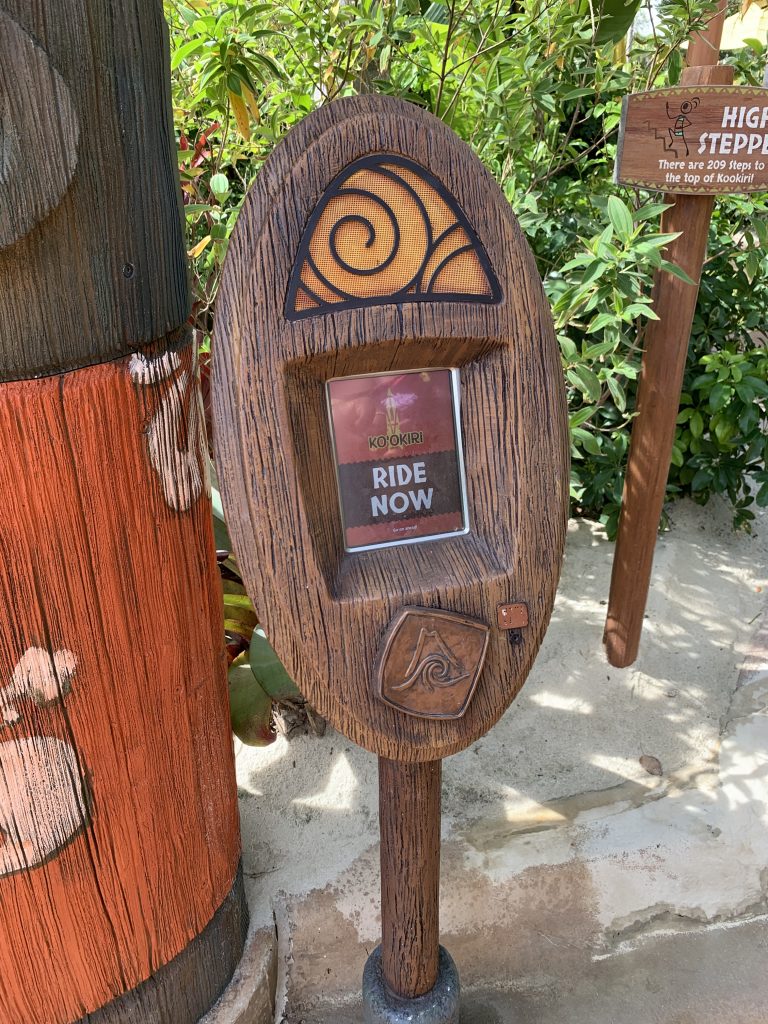 Something I have not enjoyed about most water slides in other parks is having to wait in line to go on attractions and slides while you’re wet and cold. Plus it’s a lot of waiting to do one slide, and you’re missing out on relaxing and doing other things. Well with the TapuTapu band, you go up to an attraction’s virtual queue kiosk and tap your band. Your band will then tell you when it’s time for you to head to the attraction to ride! (Reminds me somewhat of how Rise of the Resistance boarding groups work). If the park is having a slow day and there’s no line, the kiosks will say “Ride Now” meaning there’s not a wait.

This water park was truly the ultimate vacation experience, full of fun, thrill, immersiveness, and relaxation. Part of the relaxation aspect was definitely the convenience of mobile ordering food, having a FuelRod machine in the park, and entering virtual queues with the TapuTapu band. It seems as though Universal has thought of just about everything and anything they can do to make this a relaxing and convenient water park. 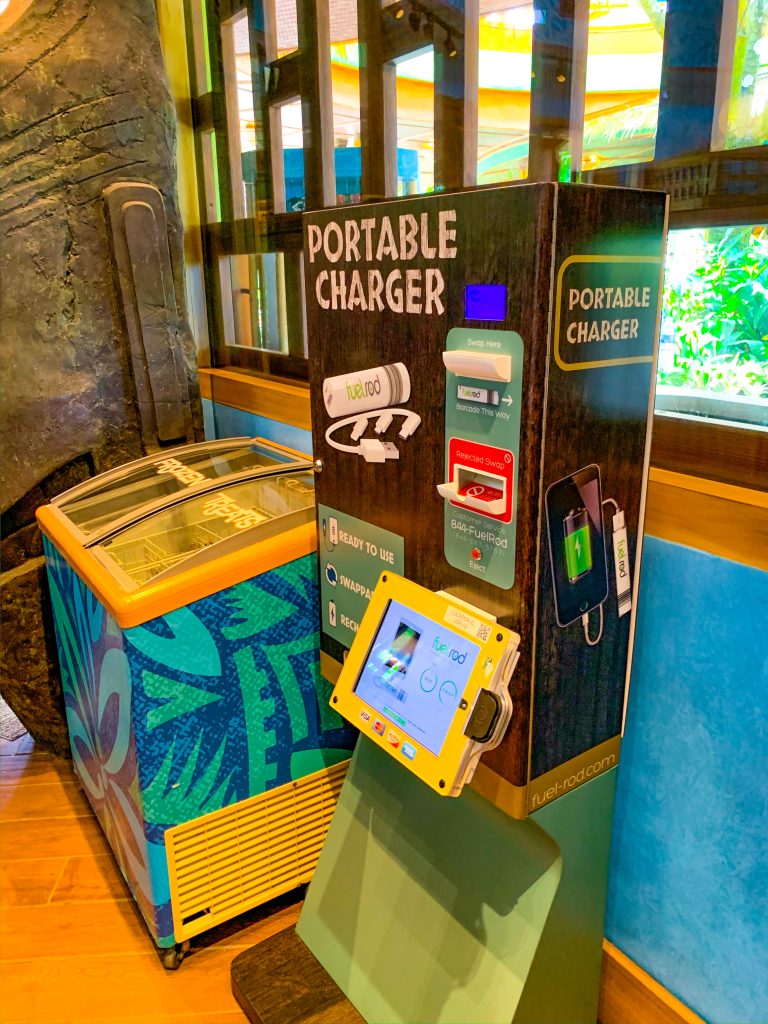 Other things I wanted to highlight were the great shops they have at Volcano Bay. They have pretty much anything you would need for your day, including waterproof phone holders, swimsuits, flip flops, sunglasses, sunscreen, and snacks to take to your lounge chairs! The cast members were also knowledgeable in what food items were vegan and gluten-free, so it’s easy to dine with dietary restrictions. They informed me the Beyond burger is vegan with a gluten-free bun, and all the sandwiches and burgers can be made gluten-free! 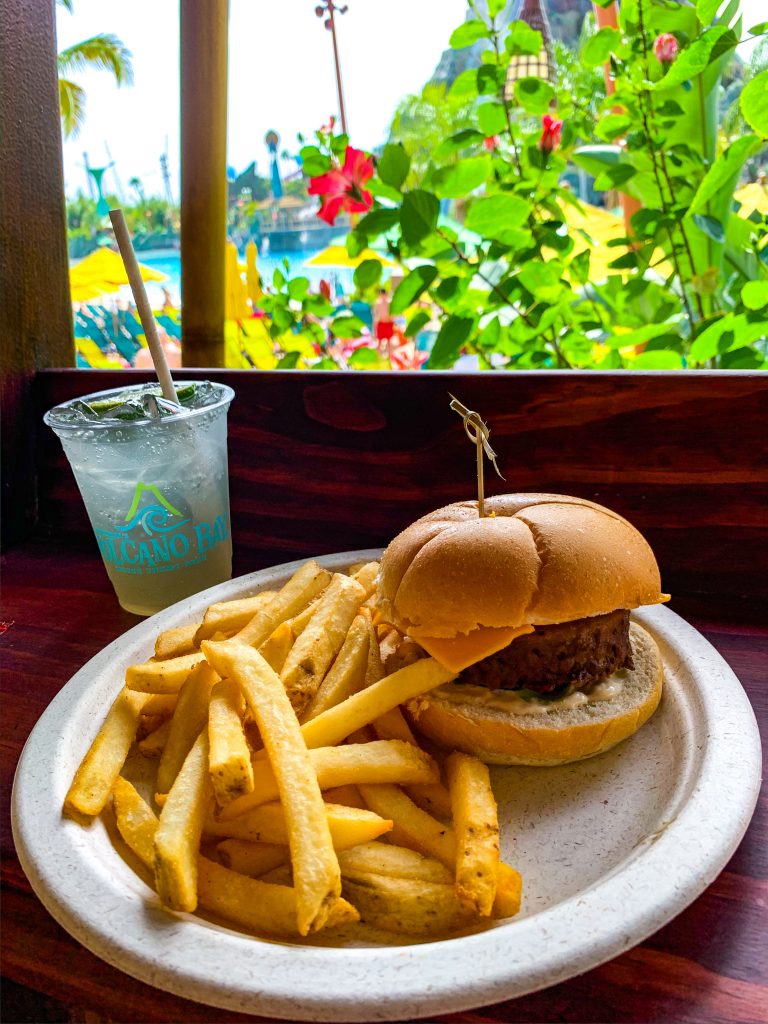 Beyond Burger and Margarita 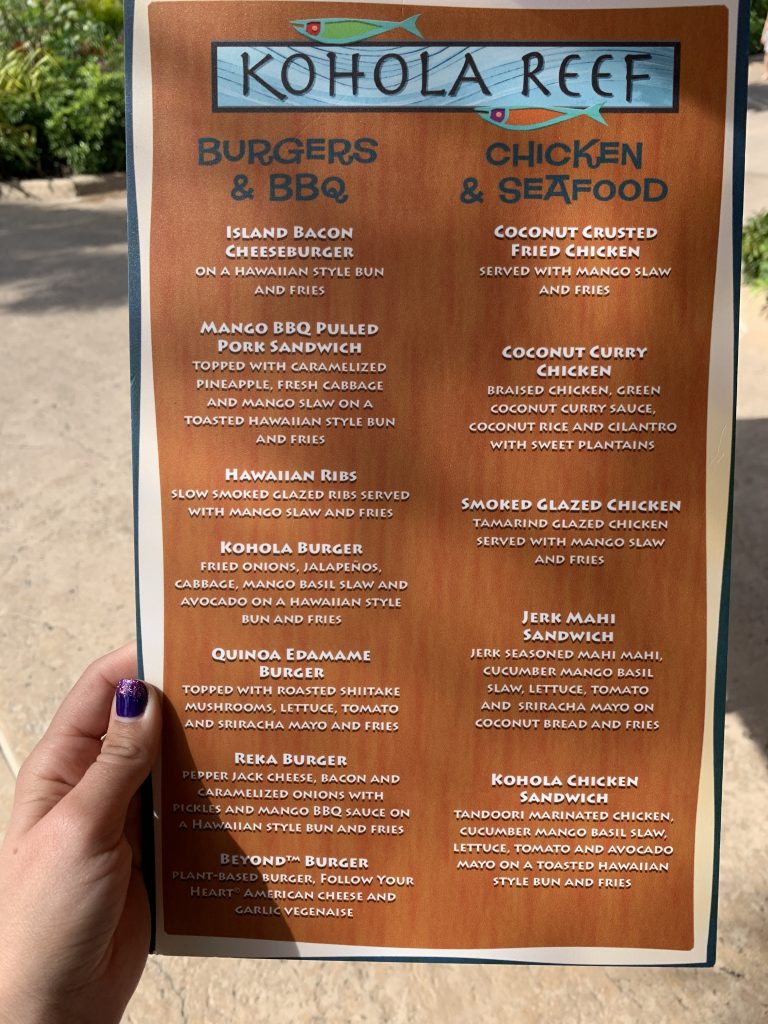 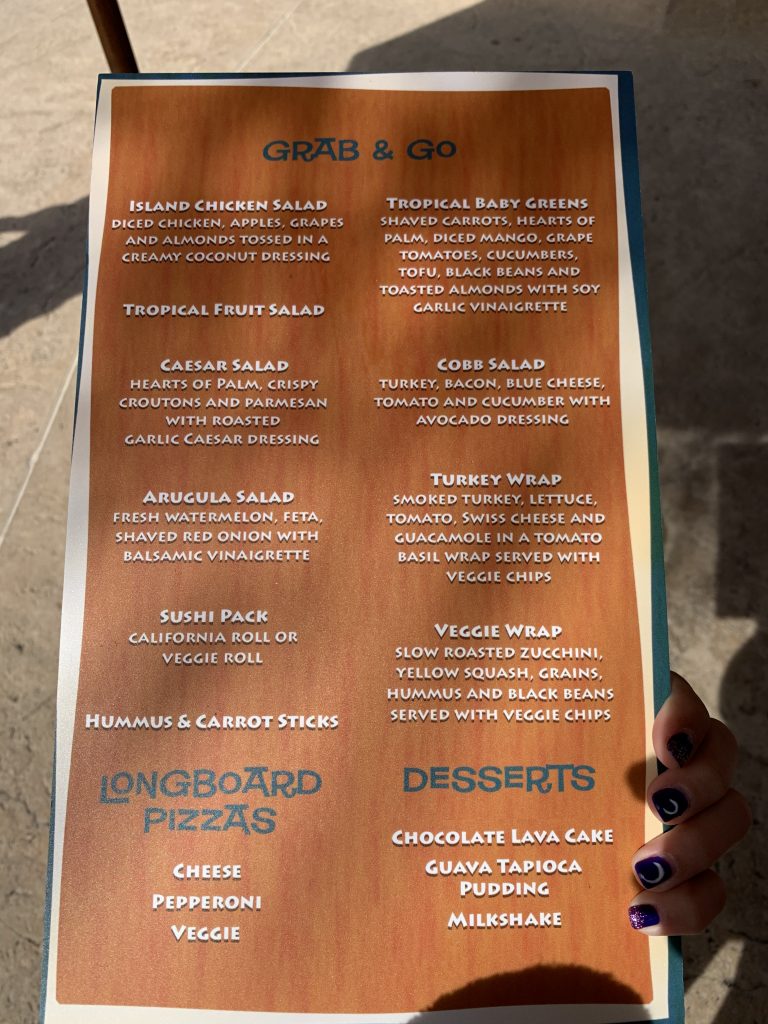 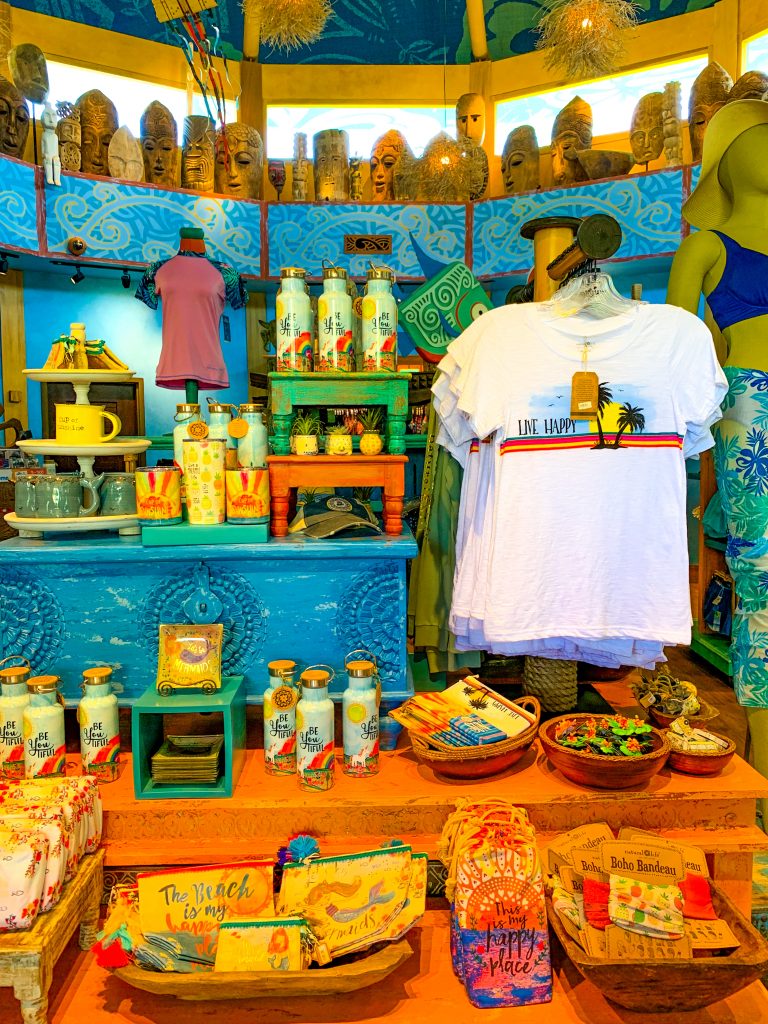 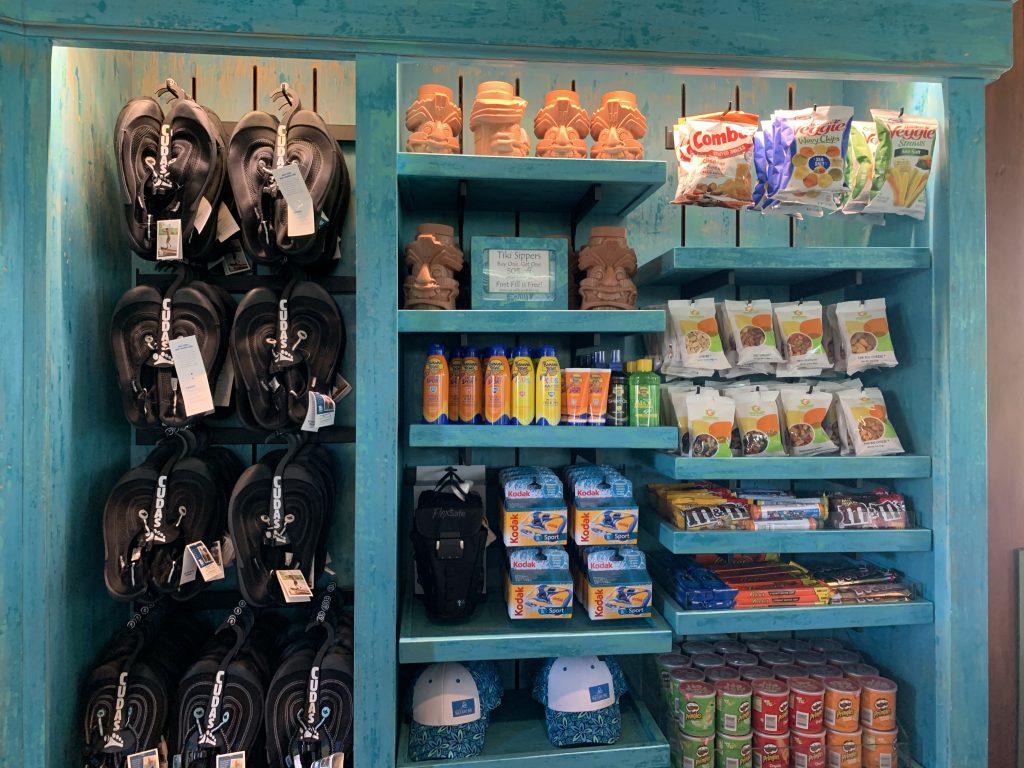 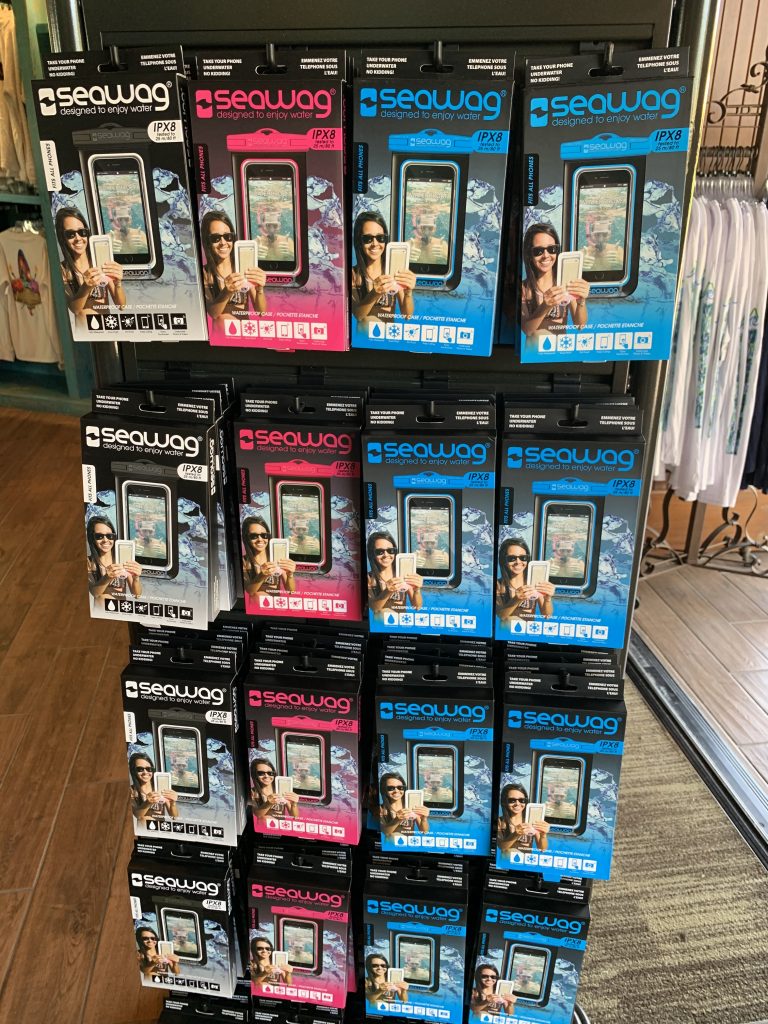 To learn more about Universal’s Volcano Bay and to get tickets, visit their site here. To learn more about visiting Universal Orlando Resort’s other theme parks during your trip, you can see my blog post on the other two parks here, as well as learn about staying at an on-property Universal Resort.